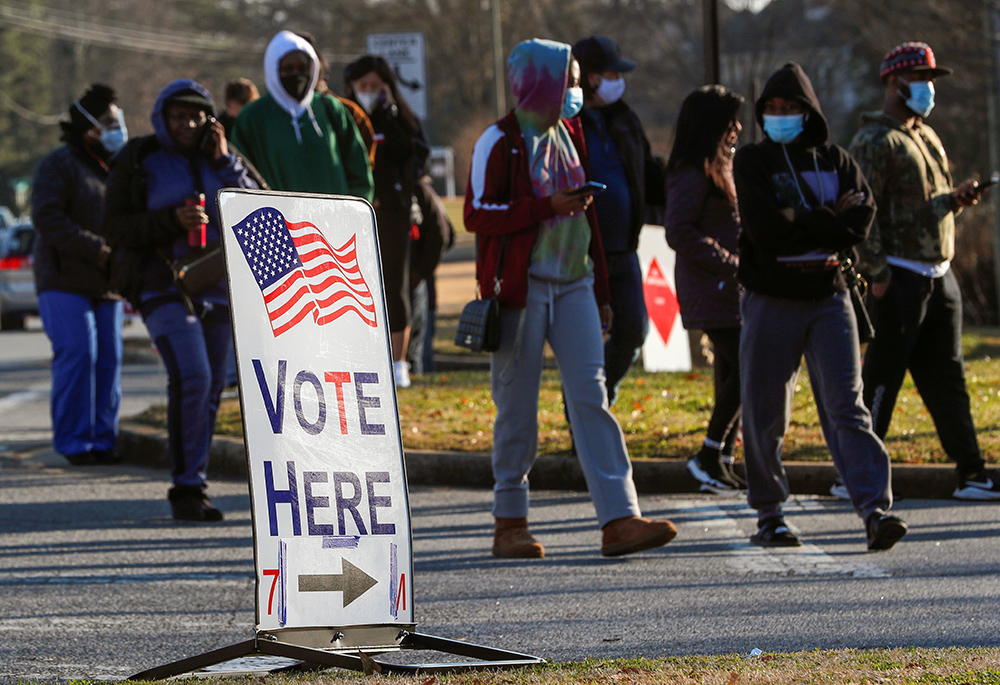 Voters in Marietta, Georgia, line up to cast their ballots in the U.S. Senate runoff election Jan. 5, 2021. Within its national campaign, Interfaith Power & Light has focused much of its efforts in three states: Georgia, Pennsylvania and Michigan. (CNS/Reuters/Mike Segar)

With less than 100 days until the midterm elections, a national network of state-based environmental faith groups is gearing up for a final push to register their communities to vote and then cast ballots with caring for creation front-of-mind.

Since the spring, Interfaith Power & Light has mobilized its state chapters to engage their local congregations through its Faith Climate Justice Voter campaign. The effort seeks to increase the number of registered voters and to educate communities of all religious traditions about the importance of voting and what's at stake in the coming elections for the environment, climate change and democracy.

"The reality is that in order to create this world that is built on our values, we have to vote," said the Rev. Susan Hendershot, president of Interfaith Power & Light. "Voting is a way that we can create the world that we want to live in, and a world in which we're caring for our neighbors and caring for our common home."

The campaign is national in scope but has focused much of its efforts in three states: Georgia, Pennsylvania and Michigan, which held primary elections on Tuesday, Aug. 2. Each state is electing its next governor, and the Senate races in Georgia — where Raphael Warnock, a Democrat and Baptist minister, is seeking reelection — and in Pennsylvania — where an open seat is up for grabs to replace retiring Republican Pat Toomey — are seen as critical in determining party control of the upper chamber.

Democrats currently hold both the Senate and House of Representatives with slim margins. How the midterms play out will have a role in determining what direction federal action on climate and the environment will take in the next two years.

As a religious nonprofit organization, Interfaith Power & Light does not endorse specific candidates. "What we are clear about," Hendershot said, "is that we need to be sure that we are electing people who will put climate as a priority no matter what their party affiliation is," and at all levels of government. 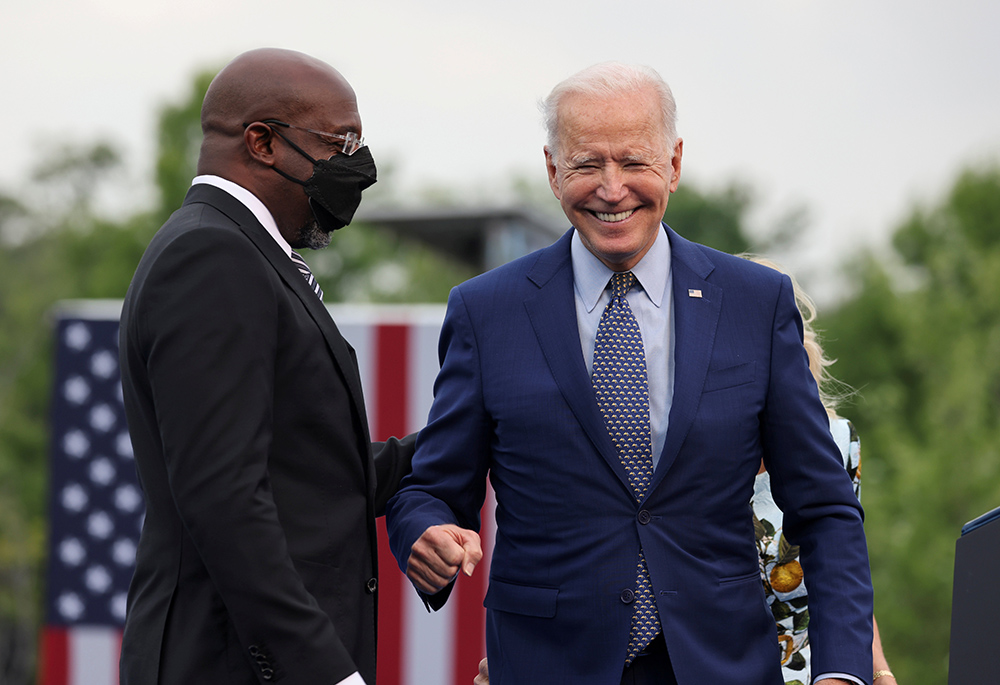 President Joe Biden smiles next to Sen. Raphael Warnock, D-Ga., at the Infinite Energy Center April 29, 2021, in Duluth, Georgia, during the Democratic National Committee's "Back on Track" drive-in car rally to celebrate the president's 100th day in office. (CNS/Reuters/Evelyn Hockstein)

Casting faith values on creation at the polls

So far, the Faith Climate Justice Voter campaign has worked to register voters and verify registration statuses, as well as educate them about the importance of voting and how issues of climate and environmental justice fit into the milieu of issues facing voters at the ballot box.

"How people vote really shapes and determines which issues are going to be at the top of the agenda," the Rev. Adam Taylor, president of Sojourners, said during a July 14 webinar that Interfaith Power & Light hosted on voting access. "And how we continue to be engaged in our political system, that by trying to hold our elected officials accountable, will also play a huge role in determining what happens around environmental justice and climate."

In June, Interfaith Power & Light issued a faithful voter guide that includes reflection questions on climate change and other issues, as well as questions to pose to candidates at town halls and other engagement opportunities. The guide, available in both English and Spanish, has been endorsed by numerous other faith groups, including Network and the Sisters of Mercy. Nearly 8,000 copies have been distributed.

"As people of faith and conscience across the country, we believe elections are a referendum on the values that will shape our future," the guide says in its introduction. "How can we renew our fragile democracy? How do we honor the human dignity of every person? Will we protect God's Creation, our Sacred Earth, and our children's future? What policies will prioritize the common good and confront future crises that remind us of our interdependence?" 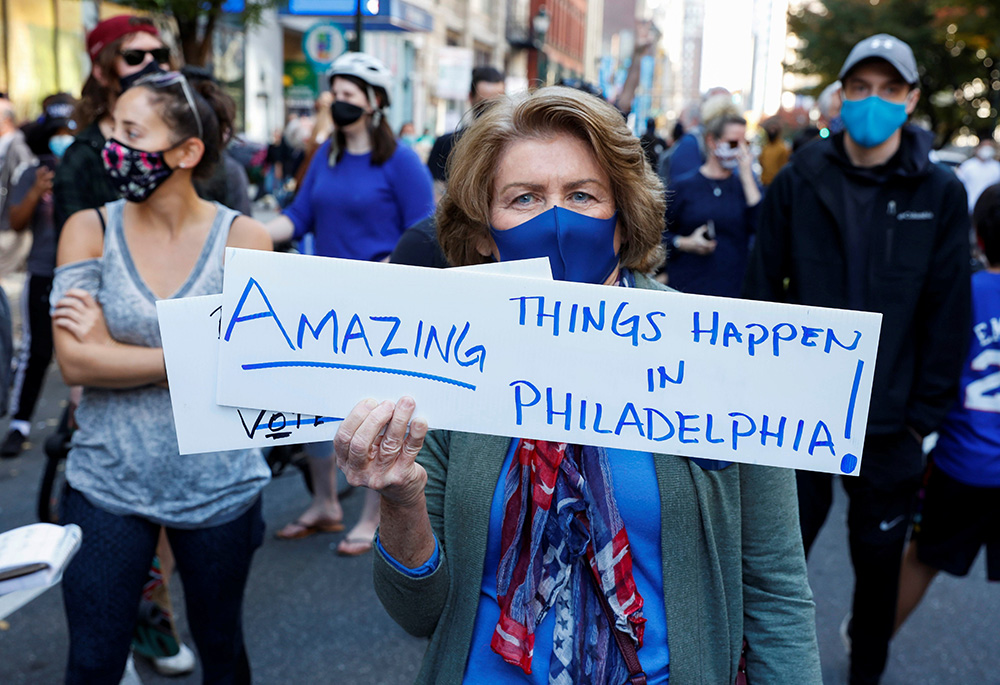 A woman holds a placard in Nov. 7, 2020, in Philadelphia, as media announces that Joe Biden is the presumptive president-elect of the United States, winning the 2020 presidential election. (CNS/Reuters/Rachel Wisniewski)

In addition, Interfaith Power & Light has signed up "congregation captains" to lead hyperlocal voting efforts in their communities and join outreach efforts in the three key states. A recent push has targeted pastors and faith leaders to preach about the importance of voting and how values around protecting the created world can inform decisions. A webinar on the topic will be held Aug. 9.

In Pennsylvania, members of the state IPL chapter have held educational events for voters and have held advocacy meetings to encourage people to raise environmental concerns with their representatives and candidates; members are also meeting with representatives directly.

Environmental conversations in the state often revolve around fracking, said Sr. Donna Korba, a member of the Sisters, Servants of the Immaculate Heart and board member of Pennsylvania Interfaith Power & Light. The Republican nominees for governor and Senate both support expanding fracking — a gas drilling technique that has been connected with air and water pollution — while the Democratic candidates have tried to strike a balance between "responsible fracking" and transitioning to clean energy.

"We're attempting to move away from fossil fuels, and yet for many people right now, it's challenging because that's their livelihood. And it's challenging for people in this economy to try to dream beyond today," Korba told EarthBeat, adding that candidates are not giving enough attention to climate and environmental justice. 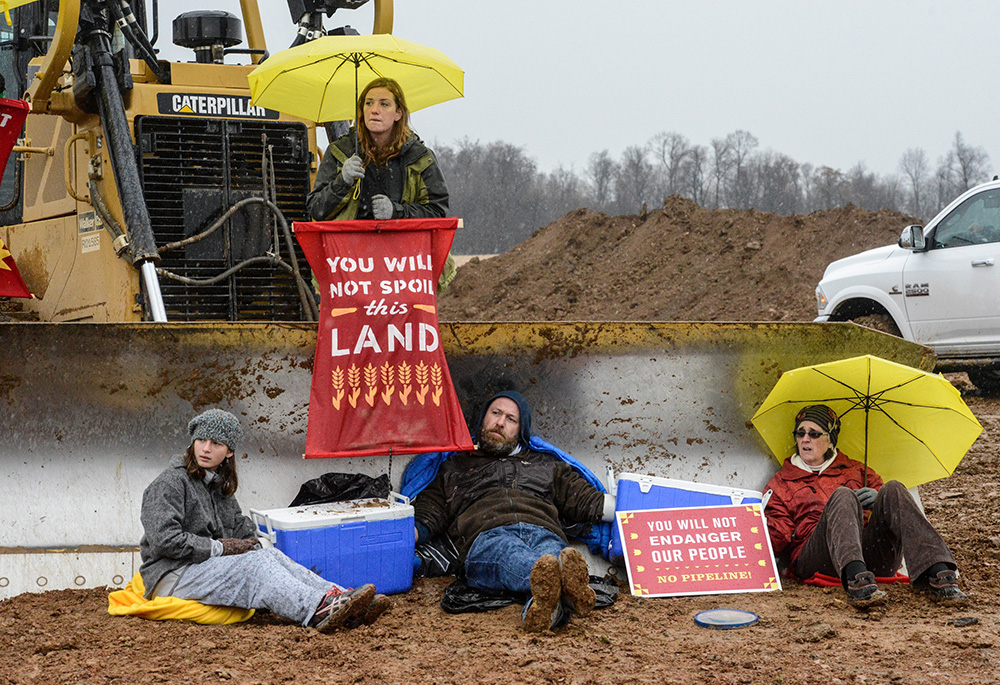 Activists with Lancaster Against Pipelines block construction of a pipeline Nov. 18, 2017, in Holtwood, Pennsylvania. (CNS/Reuters/Stephanie Keith)

In the fall, the Faith Climate Justice Voter campaign will accelerate its voter turnout efforts in Georgia, Michigan and Pennsylvania through a text banking push aimed at reaching people of faith who are alarmed by climate change but are not regular voters.

Interfaith Power & Light conducted a similar texting campaign, with the help of the Yale Program on Climate Change Communication, ahead of the 2020 elections, where it contacted roughly 240,000 potential voters. This year, they seek to double that number by reaching a half-million prospective faith voters.

The ramp-up in Interfaith Power & Light's voting campaign comes amid significant developments on the environment from every branch of government in Washington.

In Congress, Democrats, with perhaps no support from their Republican colleagues, are looking to pass potentially historic investments in clean energy as part of the nation's response to climate change. Meanwhile, President Joe Biden has considered the possibility of declaring a federal climate emergency. Both moves follow in the wake of a major U.S. Supreme Court decision that curtailed the degree to which the federal government can regulate greenhouse gas emissions from fossil fuel-burning power plants.

Codi Norred, executive director of Georgia Interfaith Power & Light, told EarthBeat the past year of up-and-down negotiations in Congress over climate legislation only raises the already-high stakes of the midterm elections for both national and state action on climate change.

"Congress is a lever of many levers that we have access [to] to make effective climate policy possible," he said.

Beyond Washington, he and others with Georgia IPL say local elections matter, too. For instance, down-ballot campaigns for public service commissioners and public utility commissioners impact the direction of state energy policies, especially important in Georgia which has one of the highest energy burdens, or the portion of income that goes toward energy bills, in the country.

Still, recent polling has shown that climate change and the environment continue to rank low as top voting issues for most Americans.

Korba said the current economic strains that many people are facing due to rising costs of groceries, energy and many goods makes it challenging to look at longer-term issues like climate change. In her own conversations, she's tried to emphasize how climate justice relates to inflation and other concerns currently grabbing headlines.

"It really intersects with every other issue — economics and racism and immigration," she said.

Hendershot added that the war in Ukraine and resulting spike in gasoline prices are interconnected with the impacts of climate change on display this summer across the country, from wildfires out west, to extreme flooding in Kentucky and Missouri, to scorching heat waves that have set records in many states and resulted in numerous deaths. 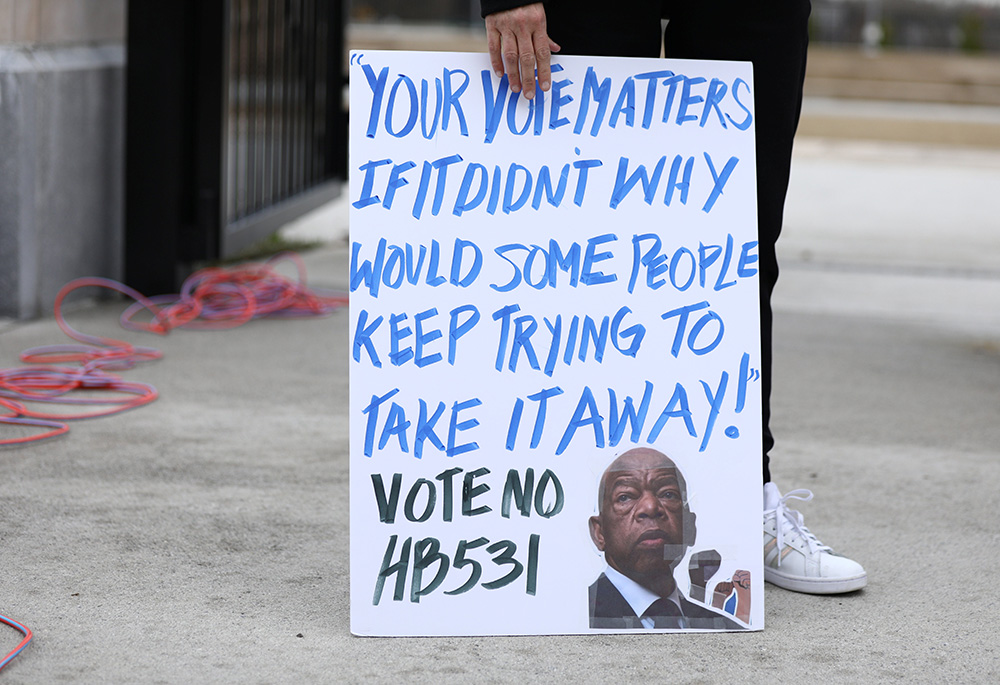 Barriers to the ballot

A key focus of the Faith Climate Justice Voter campaign has been ensuring people not only are registered to vote but don't face restrictions on the right.

"The vote unlocks so much more when it comes to not only maintaining our democracy, but advancing so many of the issues that we care so deeply about because of our faith, including protecting our planet and advancing climate justice," Taylor of Sojourners said during the July 14 webinar.

State IPL chapters have mobilized to help people register to vote and to oppose efforts to limit access to the ballot box. According to the nonpartisan Brennan Center for Justice, 18 states have passed more than three dozen laws that restrict voting access, including purging registered voters from voter rolls, closing polling locations, often in communities of color, and restricting times to register and vote.

During the webinar, faith leaders in Georgia, Michigan and Texas described important environmental issues on the November ballot and the challenges some face to vote in their states.

Bee Moorhead, director of Texas Impact, said that voting laws passed last year have set up barriers to voting that not only disenfranchise individuals but target election workers. Texas Impact has filed suit against the state over the law, and has focused on congregations as "election mobilizers."

"You see congregations of all faiths as anchors in local communities. … They are in a great position to lead the rest of the community in increasing voter turnout," Moorhead said.

Taylor said the country is at a critical moment for democracy, and that faith leaders have an important role to play in calling out voter suppression efforts while ensuring people have the right to vote and elect their representatives.

"If we're serious about following Jesus, we got to be serious about using the tools at our disposal to ensure that we can protect the planet and protect those who are poor and those that are marginalized. And so, again, voting is crucial," Taylor said.