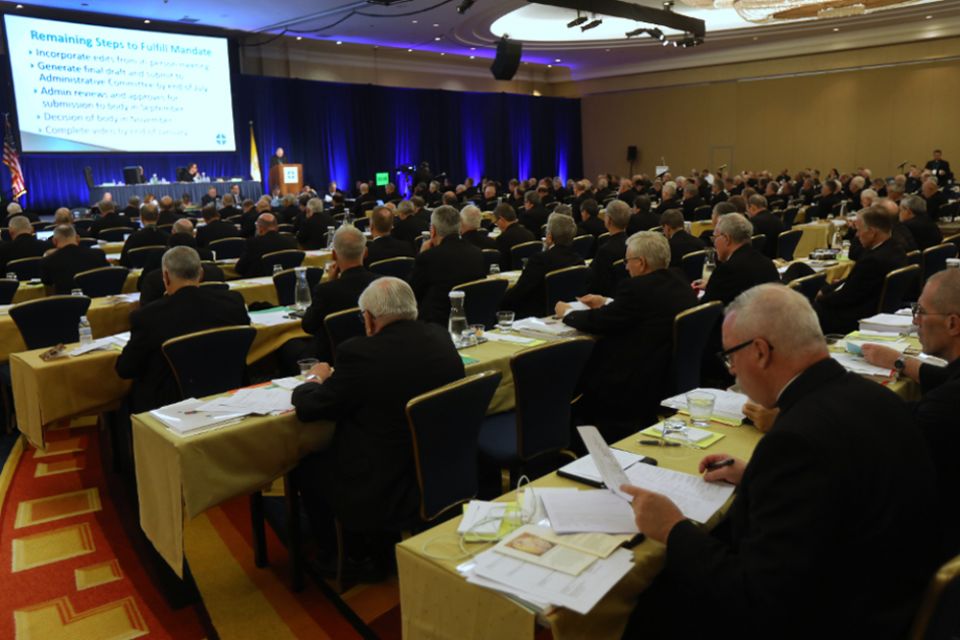 The first day of the bishops' spring meeting in Baltimore was a case study in institutional decline.

In 2002, then-Bishop Wilton Gregory, now the Archbishop of Washington, was the president of the bishops' conference and he knew how to count votes, a trait people learn young in his native Chicago. He went into those meetings having built wide consensus for the proposals. That did not happen this time. The bishops received the proposed documents on their bishops' only website, but only in some ecclesiastical provinces did the metropolitan archbishop take the initiative to consult his suffragan bishops. I asked one bishop if there had been any effort to forge consensus in advance so that the bishops could hit the floor running. "That did not happen," he said.

In part this lack of preparation was because of Cardinal Daniel DiNardo's health. The president of the conference suffered a stroke in March. In part, it was the result of the leadership at the conference, the "fifth floor" of the U.S. bishops' conference, having never warmed to the metropolitan plan proposed last autumn and enacted by Pope Francis in his motu proprio Vos estis lux mundi. It is frankly shocking that the U.S. bishops, who really were leaders in forming a nationwide episcopal conference in the early 20th century, had to devise a response to the latest iteration of the sex abuse crisis not through the conference but in significant ways in spite of it. Never in my memory were the proceedings of the conference suspended so that the metropolitan bishops could hold a meeting amongst themselves. Never.

The task for the bishops this week is not that difficult. Francis established new law for the entire church this spring with Vos estis. The bishops must report all cases of sexual abuse or a cover-up of abuse, including — for the first time — allegations directed against a bishop. They must abide by all civil laws, which in this country means notifying civil authorities of all cases, although the manner of such notification varies from state to state. And, importantly, no one expects there to be a large number of sexual abuse allegations against a bishop nor, since the enactment of the 2002 Dallas Charter, many cases of cover-up. Certain high-profile cases, such as that of former Bishop Robert Finn of Kansas City-St. Joseph, have already been dealt with. Most bishops anticipate that the situation in Buffalo, New York, where Bishop Richard Malone was accused of covering up sex abuse charges, will be one of the first trials for the procedures adopted this week. Because of Vos estis, for the first time since the scandal emerged in the 1980s, cover-ups will now be treated with the same severity as sexual abuse itself.

Critics of the metropolitan plan are many, and all of them need to read Lumen Gentium, the Second Vatican Council's Dogmatic Constitution on the Church. Ours is a hierarchic church and has been such for a long time. Vatican II taught in explicit terms that this structure was ordained by Christ himself when he chose the Twelve and imparted to them the Holy Spirit, the event we celebrated last Sunday. The idea that the conference leadership was going to appoint a national lay review board with oversight power over the bishops was never, ever going to happen. Given the current reality of the church in the United States, in which a few very wealthy and very conservative lay people are only too willing to grab as much power as they can, we can all be thankful for the clear teaching of Vatican II. The bishops cannot outsource the leadership of the Christian community even though they have, in so many ways, compromised the moral and spiritual authority such leadership requires.

Francesco Cesareo, chair of the National Review Board, strongly recommended that the bishops enact a "requirement" that the laity be involved. The board called for an "ad hoc special lay commission to review allegations against bishops." His talk caused something of a stir. But it was not clear what the authority of such an ad hoc special commission would be, who would appoint such a board, at which point in the process that authority could be exercised, and how such authority would not be at odds with the prerogatives of the Holy See. I admit to being suspicious of Cesareo whom I have heard address the bishops for several years and always to pat them on the back and praise them for their work. Only now has he got religion and embraced mandatory lay oversight. Color me skeptical. No one doubts that there will be lay involvement, but we have a pope: If the "shoulds" about lay involvement become "musts," you are undermining our Catholic ecclesiology.

Implementing Vos estis is not brain surgery. The new drafts are an enormous improvement over the proposed texts last autumn and they explain in very easy to understand terms how the laity will be involved in the process. The document "Directives for the Implementation of the Provisions of Vos estis lux mundi Concerning Bishops and their Equivalents," calls upon the metropolitan, in consultation with the bishops of his province, to select an individual who will receive the initial allegation as well as the metropolitan. At the initial stage, an allegation must simply be deemed credible, a very low bar. It is then referred to the Holy See for authority to commence an investigation. The document explains how the metropolitan, having received the authorization, should employ lay people to conduct the investigation and how to work with the relevant dicasteries of the Roman curia.

Similarly, the text "Affirming Our Episcopal Commitments," is less managerial and more pastoral in its approach, and the first commitment listed is a pledge to "continue to reach out to the victims/survivors of sexual abuse." As we have seen, unless the focus of the bishops starts with the victims, the crime of sexual abuse will inevitably be downed by clericalism, seen primarily as a cleric breaking his vows, and not as a gross injustice to the victim.

The document also explains a more truthful and authentic explication of the theological concept of scandal. "We understand 'scandal' not only in terms of how such allegations damage the image of the Church, but more so in how such sinful behavior injures the victim and causes others to lose faith in the Church," the document states. "Our first response will be to provide for the pastoral care of the person who is making the allegation, as well as follow the established church and civil procedures to investigate."

More and more, it is obvious that 2018 was not a new iteration of the clergy sex abuse crisis. It was, instead, an ecclesiological crisis. There has been no huge uptick, not even a little uptick, in the instances of sex abuse. What became obvious in the course of last year was that some bishops were not disclosing how badly cases had been handled. Most had not even published the names of those accused, a necessary step not only in guaranteeing accountability but, more importantly, in alerting other victims that they are not alone and should come forward. And, bishops themselves were still not subject to any publicly available standards or norms regarding their own conduct.

No one wants to admit the degree to which, during the pontificate of Pope John Paul II, Rome was not inclined to tackle the clergy sex abuse crisis.

No one wants to admit the degree to which, during the pontificate of Pope John Paul II, Rome was not inclined to tackle the clergy sex abuse crisis. The career of Theodore McCarrick is "exhibit A." Under Pope Benedict XVI, Rome was willing to crack down on abuse, but not on bishops who covered up abuse. Francis has stepped into the breach.

The ecclesiological crisis exposed by the sex abuse crisis will not be healed with the adoption of these implementation plans for the simple reason that the sex abuse crisis was but one symptom of the illness known as clericalism. The report on Bishop Michael Bransfield's high living was a second. As I looked out over the ballroom at the Baltimore hotel where the bishops were meeting, I cannot say how many bishops understand how rarefied their subculture is, how their extraordinary power and responsibilities with the structures of the church can lead them to take up, not the cross of Christ, but the mantle of privilege. Francis has been calling for a renewed sense of ecclesial mission since he became pope six years ago. He, clearly, sees the need to lance the boil of clericalism. Will the bishops of the U.S. follow his lead? The sex abuse crisis may force them to do so, but addressing a symptom does not always heal the underlying cause. Do not underestimate the significant number of bishops who do not support the pope in this deeper effort to rid the church of the clericalism that is killing it.

The bishops will vote on these proposals Thursday and they will pass. Everyone realizes they cannot walk away empty handed. No one can predict what amendments will be put forward along the lines suggested by Cesareo and whether they would pass. But, it is shocking that there was apparently no effort to build a consensus among the bishops before they got to Baltimore. It is past time for new leadership at the bishops' conference. The lack of such leadership was both obvious and profoundly disappointing.