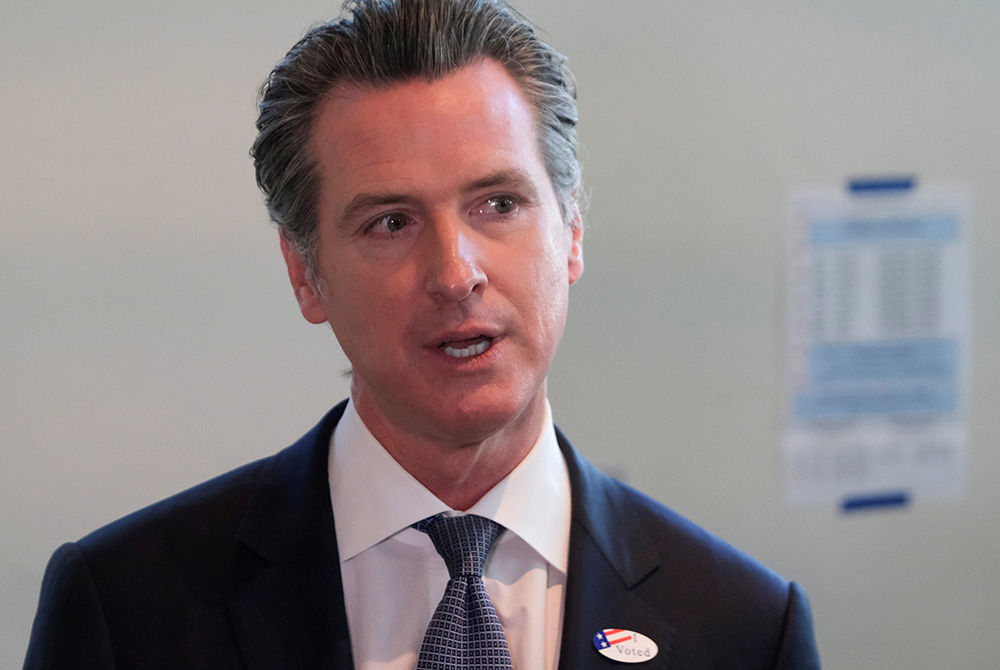 California Gov. Gavin Newsom is seen in Sacramento in this 2020 photo. (CNS/Reuters/Gabriela Bhaskar)

In The New York Times, a short documentary about Jason Berry and his groundbreaking coverage, much of it published here at NCR, about the clergy sex abuse story. It is very well done. Not sure it is going to win an Oscar like "Spotlight" but it should, not least for the photo of a very young Tom Fox!!! Congrats to Berry for this overdue recognition.

At Yahoo News, Apoorva Mandavilli looks at the ways the U.S. public is learning — or not learning — about the degree of uncertainty involved in the scientific method. As new data comes in, forecasts change. That is the way it works. One of the most despicable things Fox News host Laura Ingraham has done throughout the pandemic is charge public health leaders like Dr. Anthony Fauci with hypocrisy because their advice has changed as the pandemic unfolded when doctors like Fauci have been merely adjusting their recommendations as research warrants.

At the UK Tablet, Joanna Moorhead looks at the forthcoming "Root and Branch" synod in Bristol. The "Root and Branch" moniker makes one wonder if this is really a Catholic event, although it is an event planned by and for Catholics: Even Martin Luther left some of the root in place. One of the featured speakers at this "synod" is James Carroll, the former priest who has called for abolishing the priesthood, exhibiting the quintessential quality of the late '70s boomer white male: the ability to jump from personal whim or anecdote to an ontological claim in the twinkling of an eye. There will not be a lot of listening, except to those who already agree with the progressive agenda being put forward. This is an anti-synod, not a synod.

In The Washington Post, David Von Drehle looks at next month's California recall election. The mechanism, which originated as part of the early 20th-century progressive era reforms along with primary elections, is a case study in the need for prudence in establishing constitutional arrangements: Incumbent Gov. Gavin Newsom can booted from office if a majority vote to do so, but his replacement only needs a plurality to then claim the governor's mansion. It is time to rescind this specific provision, and to ask searching questions of contemporary progressive proposals at constitutional reform.

At CBS' "60 Minutes" this week, they had a segment on the volcanic eruptions in Iceland. Bill Whitaker traveled to the Geldingadalir volcano and the video he sent back was amazing.

At Religion News Service, Mark Silk looks back at the seminal career of pastor Carl McIntire, the renegade Presbyterian who staked out a version of Christian fundamentalism that was open to alliance with different religious groups in order to serve political ends, but fought with the likes of the Rev. Billy Graham, whose theology was close to McIntire's, because they had a different view of politics.

At Architecture Daily, a look at how some architects, and the communities that hire them, are refurbishing and repurposing some Brutalist architecture from the mid-20th century. There are sound environmental reasons to avoid tearing down these structures, many of them eyesores, most especially the fact that half of their carbon footprint is made during construction. And the results can be quite beautiful.