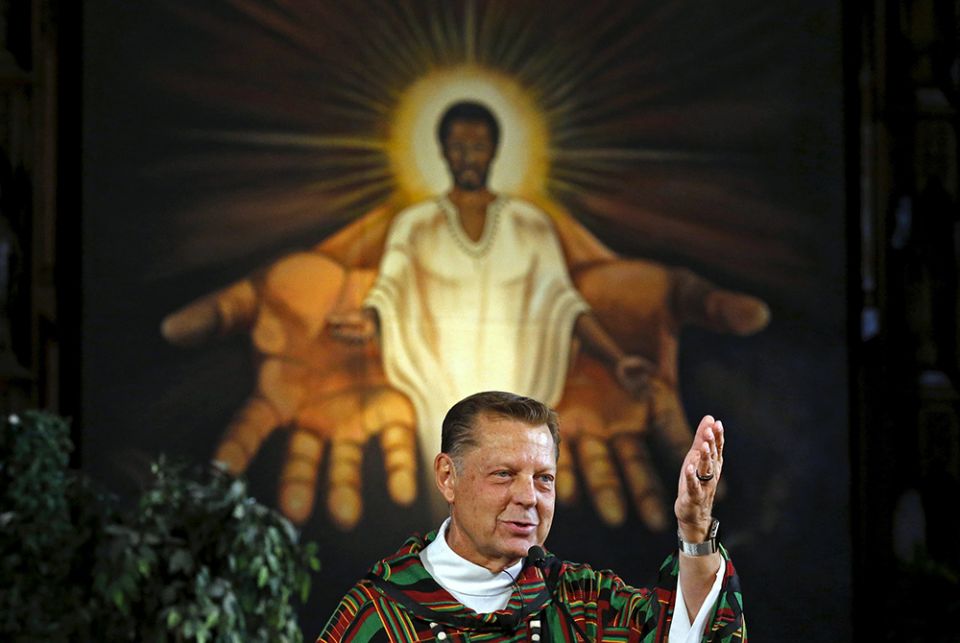 Fr. Michael Pfleger, pastor of St. Sabina Church in Chicago, is seen in this 2015 file photo. Cardinal Blase Cupich of Chicago asked the priest to step aside from ministry Jan. 5, after the Archdiocese of Chicago received an allegation he sexually abused a minor over 40 years ago. (CNS/Jim Young, Reuters)

The Catholic Church's struggle to eradicate the cancer of clergy sex abuse is on trial today. The community at St. Sabina church in Chicago is trying to obstruct the investigation of their much-beloved pastor Fr. Michael Pfleger on charges he sexually molested minors, according to a report in the Chicago Sun-Times.

"Once again this week, there was an organized effort through the St. Sabina website to employ inappropriate and intimidating tactics to put pressure on the Archdiocese of Chicago and the Independent Review Board (IRB) as the case of Father Michael Pfleger is being processed," Chicago Cardinal Blase Cupich wrote in a letter to the administrators of the parish.

Evidently, Pfleger's supporters flooded the archdiocesan phone lines dedicated to reporting clergy sex abuse. The cardinal said that "tactics of intimidation…must immediately cease." He said the investigation would be turned over to the review board of a different diocese, and the process would have to start from the beginning, if the efforts to obstruct the investigation did not cease.

Pfleger stepped aside as senior pastor at the parish in January when a letter from Cupich informed the congregation that an allegation had been received from 40 years back. In March, additional allegations surfaced. Most of the allegations of clergy sex abuse that are lodged now come from incidents that occurred a long time ago. As Peter Steinfels demonstrated conclusively in an exhaustive examination of the Pennsylvania grand jury report, almost all the cases dated from decades past, despite efforts by Attorney General Josh Shapiro to elide that fact. Long ago or not, the crime remains horrific and the damage to the victims never goes away.

Pfleger has long been one of the more controversial pastors in the city. In 2011, he had a public row with Cupich's predecessor Cardinal Francis George, who asked the priest to take a break for a few weeks after some unfortunate remarks on the radio show. He was reinstated as pastor by George the next month.

What is not in doubt is that Pfleger's work in the South Side community he serves has made him a hero to his flock, a champion, someone on their side. Many of the poor people in that part of the city are not used to having someone on their side, let alone an older white man. I find his sermons histrionic and overwrought, but there is no doubting he connects with his flock as few pastors do.

Cupich spoke highly of Pfleger when he first arrived in Chicago in 2014, telling an interviewer, "He really is a loving pastor of his people, he cares deeply about them. He works hard every day on behalf of folks who many times would be neglected or on the margins." There is no personal animus between the two, and conservative critics of Pfleger tend to be critical of Cupich too.

Which is why the current situation is so critical. The community at St. Sabina, in seeking to divert or obstruct the investigation, may not realize it, but they are doing exactly what used to be done by monsignors in the 1970s and 1980s when a friend of theirs was accused of sexually abusing a minor. "I know him," they would say. "We were in seminary together. He is a good guy. Give him another chance." In 2002, the U.S. bishops enacted the Charter for the Protection of Children and Young People, known as the Dallas Charter, its most essential feature being the "zero tolerance" approach to sex abuse. Such an approach is not fair. It fails to distinguish between inappropriate touching and a rape. And it ruined men who otherwise were outstanding pastors and gifted human beings.

None of that matters when you are eradicating a cancer, and clergy sex abuse is a cancer. Just this week, Cupich removed two other pastors on charges of sexual abuse of a minor that occurred long ago. The shadow of the clergy sex abuse crisis is still with us even if the incidents themselves happened decades in the past.

We can sympathize with the people of St. Sabina, and I am not entirely surprised by their reaction. No one wants to believe the worst about someone they love. I remember when a priest friend of mine was sent to become pastor of a parish at which the previous pastor had been removed under the terms of the Dallas Charter. There was no doubt of the man's guilt: Several accusers at different parishes, years apart, related the same modus operandi by the priest. Yet many in the parish refused to believe the allegations and they were exceedingly hostile to my friend, their new pastor. Some eventually left the parish. But that was 2003, and this is 2021. We have come too far in the effort to end the scourge of clergy sex abuse to start making exceptions for pastors we admire.

I do not know how this will all play out. Pfleger threatened to leave the Catholic Church rather than surrender his pastorate back when he clashed with Cardinal George. What is certain is that Cardinal Cupich's determination to insist that no one interfere with the investigation is appropriate. The protocols the church has created to confront the scourge of clergy sex abuse have been implemented at tremendous cost and effort, because failure to end the scourge threatened to destroy more young victims and the church as well. It is time for Fr. Pfleger to tell his former parishioners to stop obstructing the investigation.