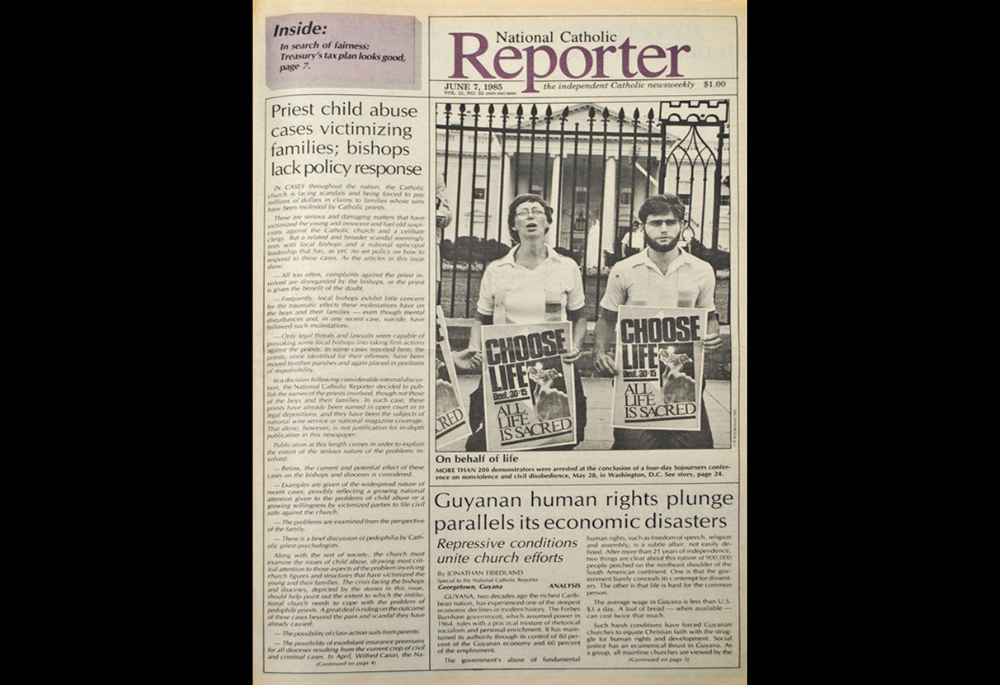 Survivors of clergy sexual abuse gathered with supporters June 4 to mark an important anniversary and, even more importantly, to reenergize their solidarity.

It was 20 years ago that the Boston Globe exposed the cover-up of predatory priests by the Boston Archdiocese, journalism that earned a Pulitzer Prize and inspired the Oscar-winning film, "Spotlight."

At one point during the program, an NCR front page from 1985 appeared on the screen at the front of the room. The headline above the Page 1 editorial read: "Priest child abuse cases victimizing families; bishops lack policy response."

I admit to having something to do with the display of that page, not to diminish the extraordinary work of the Globe and its courageous sources but to underline the longevity of the scandal and to reflect NCR's 37-year commitment to bringing it to light.

That June 7, 1985, issue included Jason Berry's groundbreaking coverage of a pedophile priest in New Orleans and Arthur Jones' detailed report about predatory priests around the country.

NCR was able to play a leadership role in the sex abuse story as a result of two attributes that remain central to the organization all these years later: our independence and our focus on stories that matter to our readers.

At the June 4 event, conducted at a hotel south of Boston, survivors provided sober reminders of the lifelong impact of the abuse it took the bishops so long to acknowledge and address. Even now, as Anne Barrett Doyle of BishopAccountability.org documented in a recent NCR commentary, the church is still falling short of "hold[ing] bishops and religious superiors accountable for abuse they commit or cover up."

In the early days of sex abuse crisis, most publications — Catholic or otherwise — regarded the story as too hot to handle. At one point, the coverage prompted a member of the NCR board, Jesuit Fr. Joseph Fichter, to call for the resignation of then-editor Tom Fox. (The board instead supported Fox, prompting Fichter's resignation from the board.)

In addition to the survivors, there have been some unsung heroes in keeping the abuse story alive. Kathy Shaw, the religion reporter at the Worcester Telegram, documented the crisis nearly every day for more than 15 years at the Abuse Tracker. NCR took over the tracker from the Poynter Institute in 2003 and published it until turning it over in turn in 2006 to BishopAccountability.org, where it has thrived ever since. (Shaw staffed the tracker for all three organizations until shortly before her death in 2018.)

Neither the Globe nor The Pilot, Boston's diocesan paper, was on hand for the recent anniversary event. But NCR staff writer Brian Fraga was there, and you can read his account here.

I hope Brian's presence and his subsequent coverage resonate for you the way they do for me: After all these years, NCR is still on the story. Still listening. Still digging for the truth.

A version of this story appeared in the June 24-July 7, 2022 print issue under the headline: Sticking with the stories that matter.