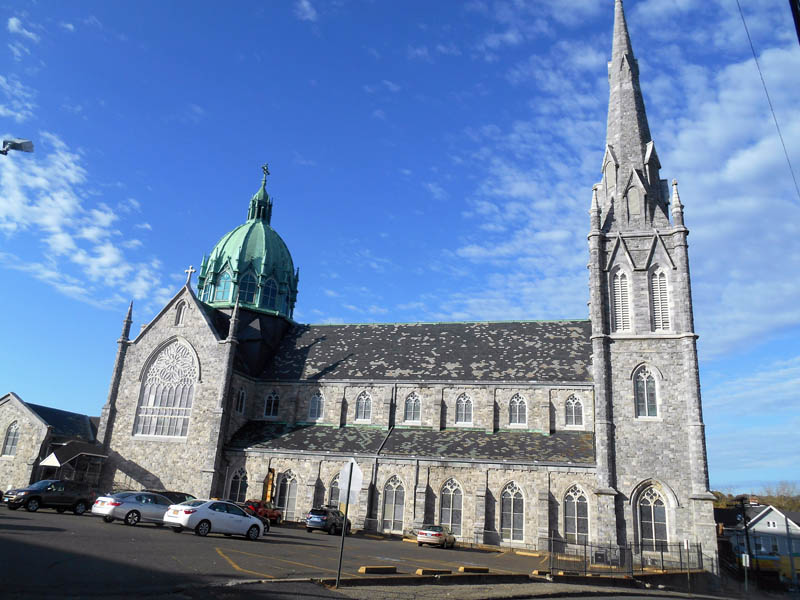 The epicenter for the massive church consolidations in the Northeast can be found here, in the newly refurbished yet spare office of Fr. Diego Jimenez.

Jimenez, 35, is the pastor of All Saints Parish, in this once-bustling industrial city of about 100,000, a part of the Archdiocese of Hartford, Connecticut. It was once called the Brass City for its major product, but most of its factories have long since departed.

At the moment, in Jimenez's office there is little but a desk, a few chairs and a phone. But Jimenez has a vision that it will soon be bustling, part of a newly renovated former school building. It now offers space for 400 children who come for religious education classes and 65 adults who are preparing for baptism and confirmation. The building stood empty for three years until it was revived last year.

The All Saints parish office is adjacent to St. Anne's Church, a massive church that towers over the modest Waterbury skyline. On Sundays the church is filled with up to 650 worshipers for Mass in Spanish and in English. It is one of two Catholic worship sites left in town as the parish, formed in June, combined its six churches under a new title, All Saints, intended to link the churches together. 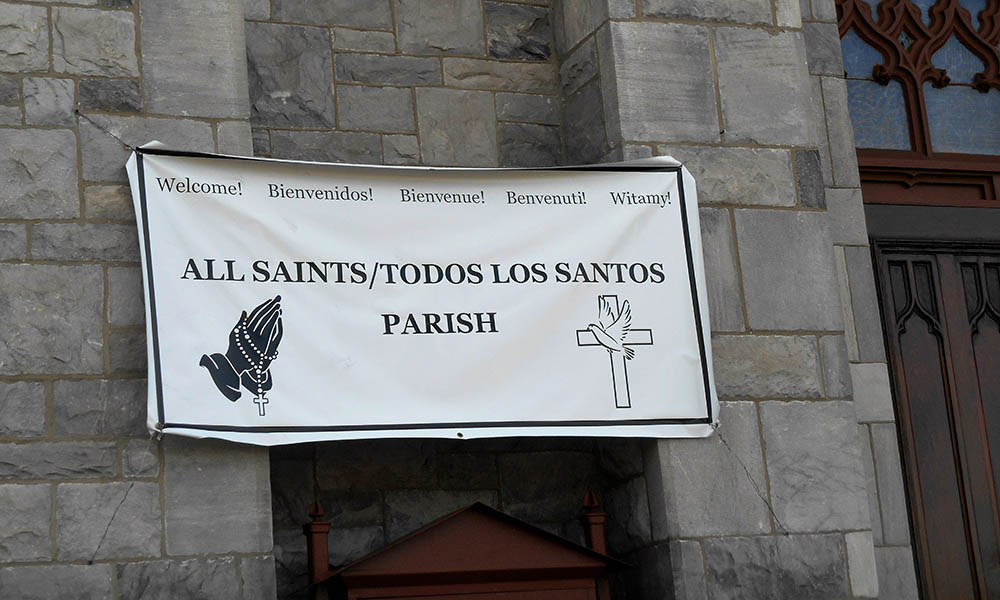 While a striking piece of architecture, St. Anne's is far from a model of modern efficiency. The giant dome leaks when the rains come. The paint is peeling. It needs literally millions of dollars of repair, but that will have to wait till the money comes, if ever.

St. Anne's was built for French-speaking Catholics beginning in 1906, with its dedication not until 1922, as construction ceased at times and then went through spurts. It is one of 16 churches that once dotted this ethnically balkanized community. Until the recent parish merger, a crowded church was a rarity in the town in recent decades, as most of its Catholic population left what became a declining industrial city.

The developers of Catholic Waterbury created an ethnic shrine for each of the city's Catholic groups. Now those 16 churches have been cut down to six, serving Irish, French, Italians, Lithuanians, Poles, and Latinos, the most recent immigrants. Literally down the hill from St. Anne's is Our Lady of Lourdes, an Italian parish whose altar sits atop a grotto featuring statues of the French peasant girl Bernadette and the Virgin Mary. It is the parish's second remaining worship site.

Waterbury's Catholic European-centric dynamic is dissipating. Devotion to Our Lady of Lourdes is giving way to Our Lady of Guadalupe. Those who come to St. Anne's each weekend are mostly Mexicans, Dominicans, Puerto Ricans, Peruvians, Ecuadorans and other Latino immigrants. They are joined by the now aging French population, absorbed enough through generations that they almost all speak English. 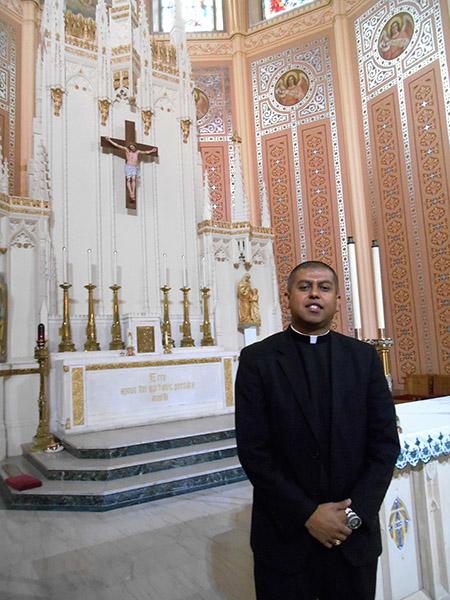 Jimenez, a native of Colombia, is a priest of the Archdiocese of Hartford. His task since last June has been the consolidation of Waterbury's six churches into one parish, served by St. Anne's and Our Lady of Lourdes, with the other churches used only occasionally for funerals and rare special occasions. The Waterbury consolidation was part of a merger process in the archdiocese that took effect June 29, 2017, overseen by Archbishop Leonard Blair.

The consolidation took 212 archdiocesan parishes and transformed them into 127 over three counties. Some mergers consisted of two parishes coming together; others featured three. Waterbury's six-into-one was the largest transformation.

The slogan for the planning process was to move "from maintenance to mission," signaling parishes to put more resources into evangelizing and de-emphasizing the maintenance of buildings. The goal is fuller pews, even if contained in a vastly smaller number of churches.

It is an ambitious project and has generated opposition, as similar consolidation efforts have in dioceses in the Northeast and Midwest. Hartford's approach has been more radical than most, as other dioceses have generally taken a more piecemeal approach to parish consolidation. In 2017, Hartford took most of it on all at once.

In suburban communities, Connecticut Catholics have been hit with a harsh reality that most millennials are no longer a part of parish life. The state had the sharpest drop in the percentage of people who identify as Catholic, according to a 2007-2014 Pew Research Center study.* 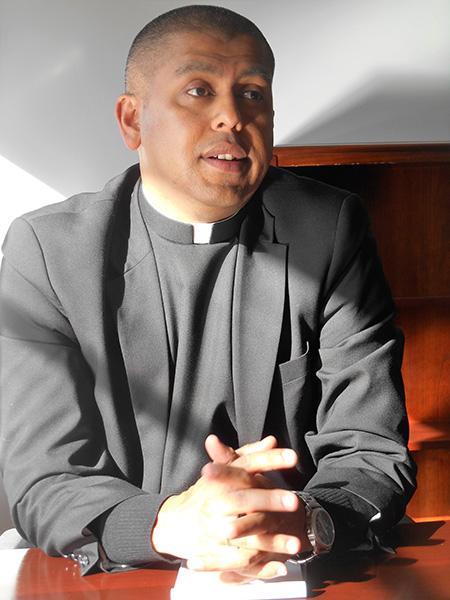 Here in Waterbury, the situation is different, and, despite straitened economic circumstances amid a largely prosperous state, more hopeful. Waterbury's 40 percent Latino population has created a ready-made Catholic community. The process of mission is already moving along.

The result is intense activity at St. Anne's. But the other churches, with the exception of Our Lady of Lourdes, have been left empty. "We don't have the people attending Mass," said Jimenez. Before the merger, it was not unusual for fewer than 20 worshipers to gather together on Sunday morning at St. Lucy's, a church which no longer features regular Sunday Mass.

Jimenez has heard the complaints from parishioners that their historic churches are now largely unused. "Why did my parish close?" "I made all my sacraments here," are some of the comments he's heard about the unused churches.

The planning process to consolidate took over two years, including parish meetings throughout the archdiocese. The conclusion in this city became self-evident. For Waterbury, "es necesario," said Jimenez, adding in English, "It is necessary."

He continued, "The faith is not the building. The faith is in the community." The stark choice is between maintaining unaffordable buildings or creating ministry for new generations. Jimenez said the best choice is the latter. 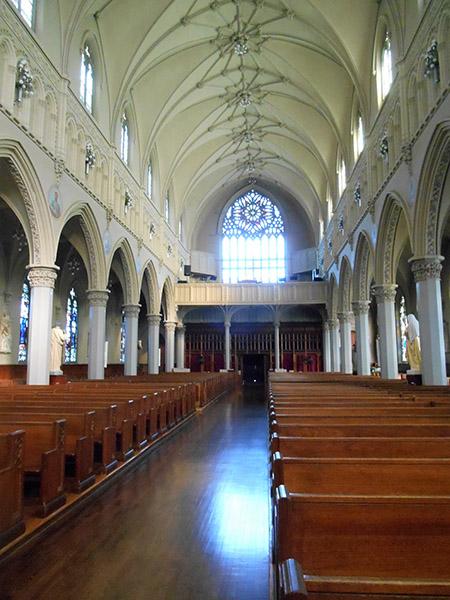 The increased attendance at St. Anne's Church, a result of moving liturgies around town to the centrally located historic church, is heartening, said Jimenez, who is assisted by two parochial vicars. The consolidation of Catholic activity in the city is taking place. The excess buildings, however, remain an albatross.

Jimenez was trained to pastor souls but now spends much of his time as a manager of architecturally impressive yet impossible-to-maintain buildings.

All the buildings in the massive parish are now under evaluation, with the help of archdiocesan experts. Church law is another obstacle. It requires churches that are deconsecrated — those buildings that can be turned over for a secular purpose — not be used in what the church would consider a profane manner. In a declining city like Waterbury, that is another obstacle put in place for eventual sale.

But, said Jimenez, "We have to reach decisions for the buildings. We don't have the money."

Offertory collections are on a slight but steady rise. Jimenez worries when the collection baskets weigh heavy, a sign that they contain many coins instead of lighter paper dollars or checks. Waterbury's Latinos are not, for the most part, a prosperous demographic. Collections now are around $6,000 weekly, a jump from what was around $4,000. It's still not near enough to keep up with the needs of even the consolidated parish.

On weekends, St. Anne's has a strong Latino flavor. But on quiet weekdays, many of the small groups meeting in the nooks and crannies of the giant church consist of older parishioners of French heritage, generations removed from the immigrant experience.

Jeanne LaPrada came to Waterbury in 1963 from Canada. She raised her four children here, and now has nine grandchildren. She plans to stay through the changes in parish life.

"This is the most beautiful church in the city, or anywhere I've ever been," she said. "It's my home."

She said that there is a sense among the older parishioners of French heritage that the parish has been taken over by Latinos. While there has been resentment, few can argue with the numbers. "The church is now filled with children. That's nice," she said of the Latino presence. At the same time, she said, there is still a place for people like her who have been here for generations.

The intercultural awareness is nurtured via an occasional food festival. Sharing European and Latino food recently brought people together for a parish festival, uniting Waterbury's Catholics from all its varied ethnic groups around common meals.

Extending that good feeling to the wider Eucharistic community is a hope that Jimenez will struggle to achieve, perhaps signaling the beginning of a revived Catholic presence in this struggling city, radiating out from the dome of its historical domed church. Even if the dome leaks.

* An earlier version of this story referred to Connecticut's number of "nones," or religiously unaffiliated people.

This story appears in the The Field Hospital feature series. View the full series.
A version of this story appeared in the Jan 26-Feb 8, 2018 print issue under the headline: 'The faith is not the building'.