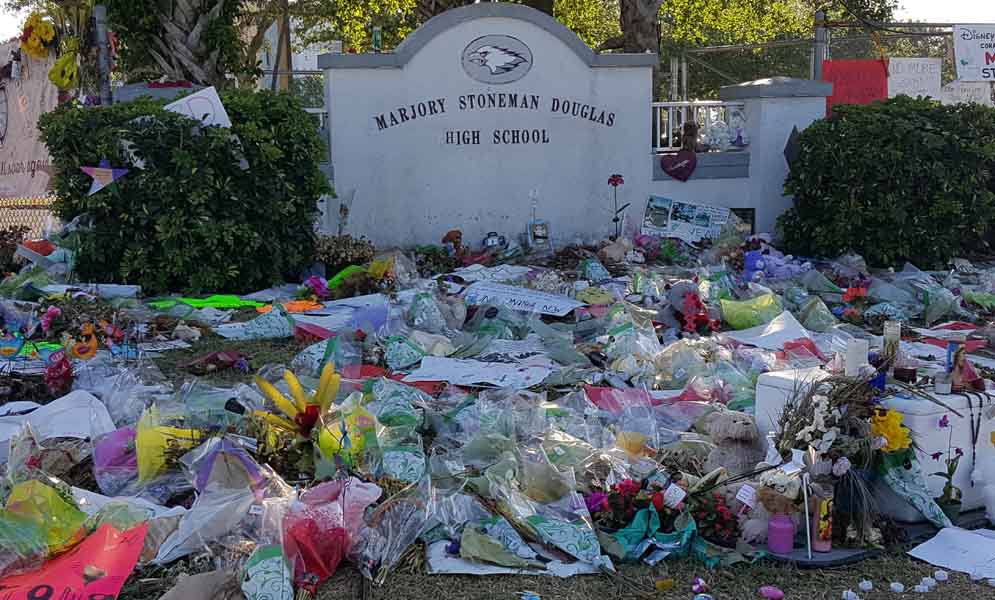 Miami Archbishop Thomas Wenski knows too well the tragedy of mass shootings. As an altar server at age 15, he served at the funeral for Charles Whitman and his mother, Margaret, who was one of Whitman's first victims before he climbed the University of Texas tower on Aug. 1, 1966, and opened fire. Whitman, who was from Lake Worth, Florida, killed 14 people and wounded more than 30 others, according to the Palm Beach Post. The incident was one of the deadliest mass shootings on a school campus in the U.S.

More than 50 years later, Wenski presided at the funeral Mass of Gina Montalto, among the 17 victims killed in the Marjory Stoneman Douglas High School shooting in Parkland, Florida, on Feb. 14. Her father, a United Airlines pilot, gave a eulogy and read the letter he'd written for her Confirmation day. "It was a beautiful letter — on keeping the faith — it was very touching," Wenski said.

"It's been a long-time issue," Wenski said of gun control and mass shootings in a recent interview in South Florida, just days after the state had passed new gun control measures. Among its provisions, the law created a "risk protection" process in which guns can be confiscated from those deemed a risk to themselves or others. 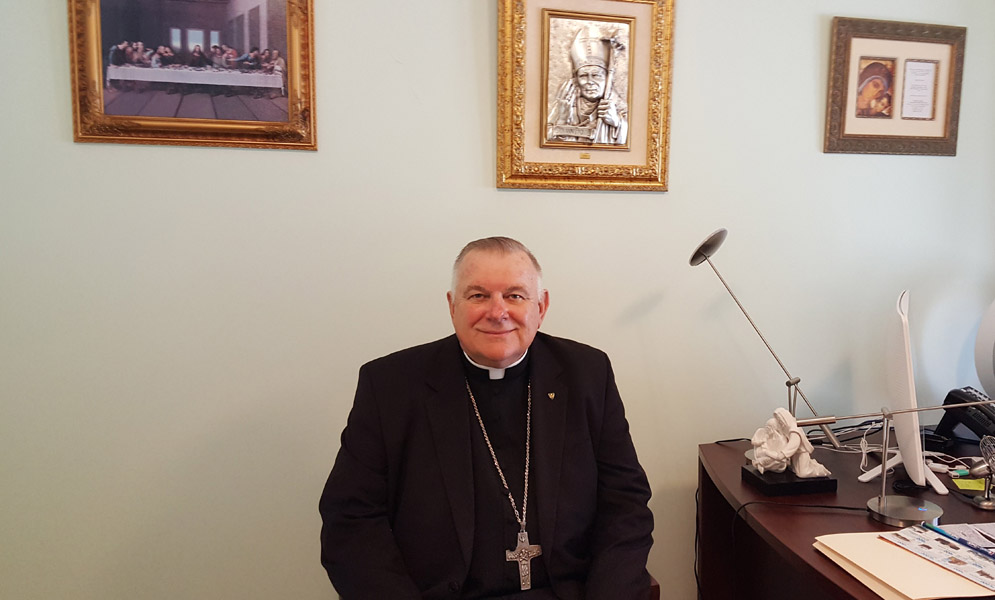 Archbishop Thomas Wenski, in an office at St. Coleman Parish, in Pompano Beach, Florida, March 11, where he presided over a confirmation Mass (Gail DeGeorge)

"Florida in three weeks did some gun control legislation," Wenski noted. "Gov. (Rick) Scott said it all when he said both sides are not happy with it but both sides had to give something."

According to the Sun Sentinel, the new law also raised the minimum age to buy rifles and shotguns from 18 to 21, applied a three-day waiting period for handguns to also include long guns and banned "bump stocks" that allow guns to mimic automatic rifles. It also allows arming of some school staff. The National Rifle Association sued to block the provision raising the minimum age.

U.S. Catholic bishops have issued several statements on gun control in recent years, Wenski said, recalling that he had written letters when serving as the chair of the Committee on Domestic Justice and Human Development. The most recent statement on March 5 by current committee chairman Bishop Frank Dewane and Bishop George Murry, chairman of the Committee on Catholic Education, referenced the Parkland high school shooting.

"Generally we say we want sensible gun control," Wenski said. "I do definitely think that bishops will continue their advocacy for a ban on assault weapons," he said in an e-mail follow-up. "The Florida law is the result of compromise — but a step in the right direction though we would not support the arming of teachers."

Yet Wenski acknowledged that the bishops have not taken the same focused, vocal stance as with abortion and immigration. In part, he said, that's "because it's hard to nationalize the issue in a way that makes sense. When you look at people who live in rural areas, they see their need for guns as a means of protection. But we continue to encourage people to move toward some gun control."

Just weeks after the shooting in Parkland, "there's a lot of strong emotions but the contours of policy are not that apparent yet because you can see where both sides are digging in," he said. "The middle ground is what was done in Tallahassee in three weeks."

"Dramatic gestures" such as gun turn-ins or buy-back programs may also be helpful, he said. "Sponsoring a 'gun turn-in' would be a 'parable in action' like Jeremiah and other prophets in the Old Testament," Wenski said. 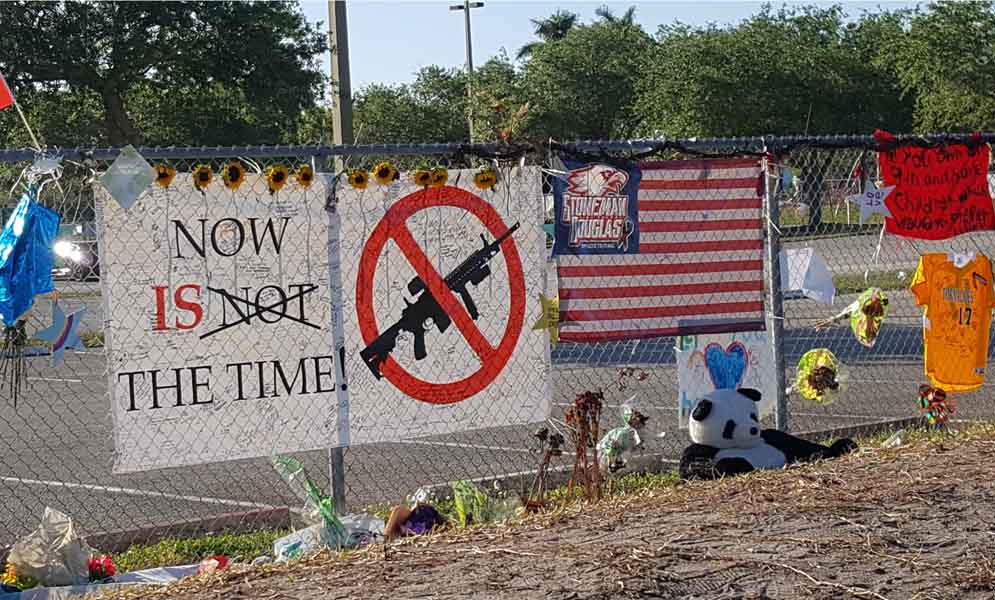 He recalled that in the late 1980s, a priest in the Miami archdiocese, Fr. David Russell, then pastor of St. Louis Parish in Pinecrest, Florida, had brought his gun to the altar and invited parishioners to turn in their own guns.

"Those are dramatic gestures," Wenski said. "Maybe we ought to do something like that." A parish in the Detroit archdiocese sponsored a gun buy-back program in 2012 in which 365 guns, including six assault weapons and a handful of sawed-off shotguns, were turned in and $16,820 handed out.

Given heightened tensions and sensitivities, such a program would have to be carefully run to not frighten people in the congregations, he said.

In an interview, Russell said he was preaching on Palm Sunday about the vulnerability of Jesus "coming into Jerusalem unarmed in any way. And if we're going to walk with the Lord, we need to walk with a sense of vulnerability. I took my gun from under the altar and invited people on Good Friday to join in the vulnerability and nonviolence of Jesus by bringing their weapons and placing them on the altar."

Russell said he'd carried a small pistol for years for protection, but in preparing his homilies and reading about the nonviolence in the life of Jesus, was inspired to take this dramatic step. "He told the disciple to put his weapon down — he knew what kind of violence was going to confront — his only weapon was love and forgiveness."

On Good Friday, "It was almost piled high to the altar with weapons that people brought in and all those weapons we turned over to the police," Russell said. He never replaced his own pistol. As to whether other parishes should undertake similar programs, he said, "anything that encourages people to enter into the nonviolent heart of Jesus is worth pursuing. It's the kind of thing people can be invited to do — and people who do it make a statement for their families and themselves." 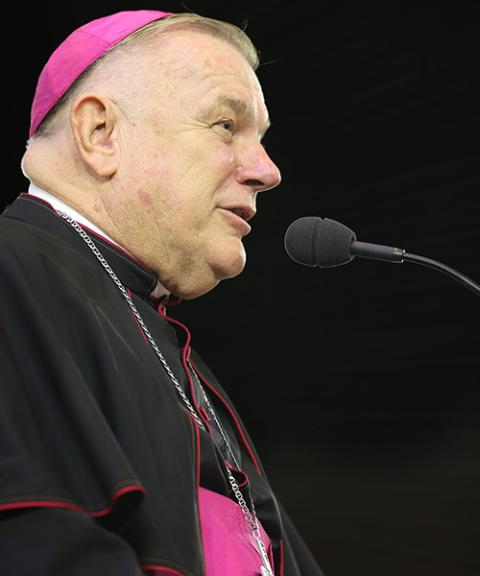 Miami Archbishop Thomas Wenski speaks July 2, 2017, during the "Convocation of Catholic Leaders: The Joy of the Gospel in America" in Orlando, Florida. (CNS/Bob Roller)

Addressing mental health issues is also key, Wenski said. "Thirty or forty years ago we de-institutionalized and shut the big asylums down but we never did what they said they were going to do which was to move people into community-based, supportive housing. So they moved them right out to the streets and they became the homeless. You don't want to stigmatize all the people with mental illness because most people with mental illness don't kill people either. But this is also a mental health issue," he said.

The Parkland shooter, Nikolas Cruz, "gave more than ample signals that there was something wrong with him." Trying to get help for parents who are dealing with children with schizophrenia or bipolar disease is hard, Wenski said.

Wenski recalled serving as an altar boy at the funeral for Whitman and his mother, who were from Wenski's hometown of Lake Worth in South Florida. "One of his brothers was in the seminary for a few years and taught me how to be an altar boy; another brother was in the class behind me at school," he said.

Whitman, 25, was a former Marine sniper and an architect and engineering student at the University of Texas in Austin. He stabbed his wife, Kathy, and his mother, Margaret, before heading to the tower and firing at people below with a high-power rifle. The rampage was stopped by police officers who climbed the tower and killed Whitman.

"What impressed me most was the fact that both he and his mother (whom he murdered) were brought to the church for the funeral liturgy," Wenski said in a follow-up email. "This left a profound impression — that the Church in her mercy accepted to celebrate funeral rites of both a murderer who, I believe, committed suicide. I don't remember this as being controversial — but in any case, it was remarkable — and laudable."

[Gail DeGeorge is editor of Global Sisters Report. Her email address is gdegeorge@ncronline.org.]