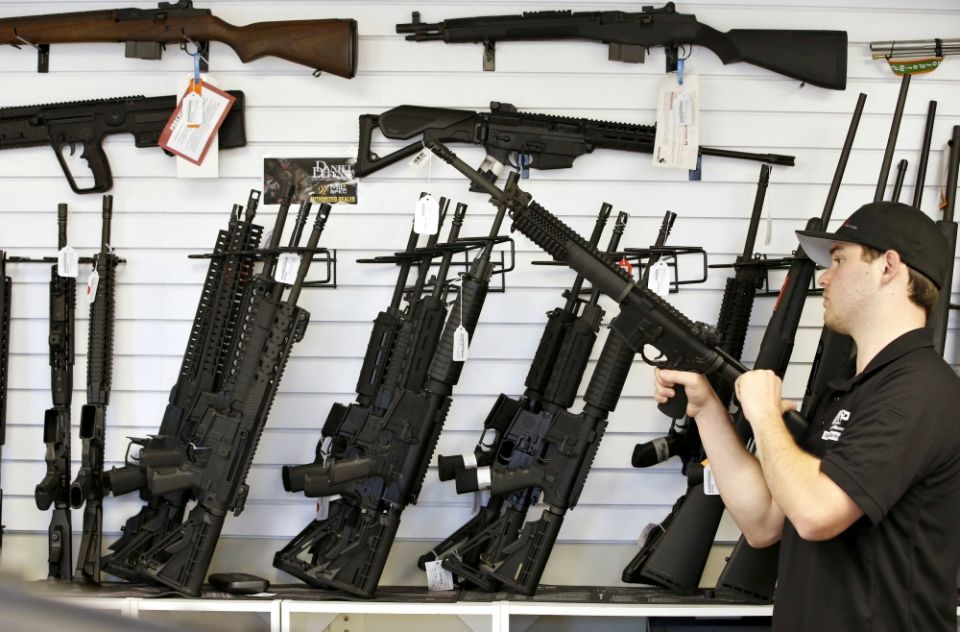 A salesman clears the chamber of an AR-15 in 2016 at a gun store in Provo, Utah (CNS/Reuters/George Frey)

The U.S. bishops' conference entered its voice Monday into the nation's latest gun reform debate, renewing past support for gun control measures like an assault weapons ban and universal background checks while expressing concern with the idea of arming teachers as a deterrent of future shootings.

"Once again, we are confronted with grave evil, the murder of our dear children and those who teach them," said Bishop Frank Dewane and Bishop George Murry, chairs of the U.S. Conference of Catholic Bishops' committees on Domestic Justice and Human Development and on Catholic Education, respectively, in a statement referencing the Feb. 14 mass shooting at Marjory Stoneman Douglas High School in Parkland, Florida.

The two committee chairmen offered prayers for those who died and "those suffering with injuries and unimaginable grief," while also reasserting the bishops' "decades-long advocacy for common-sense gun measures as part of a comprehensive approach to the reduction of violence in society and the protection of life."

"This moment calls for an honest and practical dialogue around a series of concrete proposals — not partisanship and overheated rhetoric," said Dewane, bishop of Venice, Florida, and Murry, bishop of Youngstown, Ohio.

"The Church recognizes that recourse to self-defense is legitimate for one’s own safety. In today’s world, however, weapons that are increasingly capable of inflicting great suffering in a short period of time are simply too accessible." Read more: https://t.co/4LlaqWBPzR pic.twitter.com/4m7m3p2rvh

In that vein, they reasserted the Catholic bishops long-held support for a federal ban on assault weapons, and limiting access to certain handguns and to high-capacity weapons and ammunition magazines.

The bishops also pushed against the idea of placing armed, trained teachers or other professionals into schools as a means to deter a shooter — a concept that President Donald Trump has repeatedly advocated in the aftermath of the Stoneman Douglas massacre.

"The idea of arming teachers seems to raise more concerns than it addresses," the bishops said.

Legislation addressing bump stocks and background checks has been introduced in Congress, though no bill has gained much momentum. A bill introduced earlier Monday by a bipartisan group of eight senators, including both senators from Florida, would require federal agencies to report to state law enforcement within 24 hours individuals who try to buy a gun but fail a background check. A previous version of the bill was proposed in the House of Representatives in January 2016.

The bishops also called for increased safety measures for storing guns and more steps to criminalize gun trafficking. They stressed that while most people with a mental illness rarely commit violent acts, there is a need to increase mental health resources as well as implement earlier intervention strategies.

"We must explore ways to curb violent images and experiences with which we inundate our youth, and ensure that law enforcement have the necessary tools and incentives to identify troubled individuals and get them help," the committee chairmen said.

The statement from the U.S. bishops' conference joins multiple other calls from Catholics in the 19 days since the Valentine's Day mass shooting at Stoneman Douglas, where a former student armed with an AR-15 semi-automatic assault rifle killed 14 students and three school officials.

But it's been Stoneman Douglas students, as well as other teens, including from Catholic schools, who have taken on a central role in the national discussion on how to prevent future mass shootings and curb gun violence in America.

Over the weekend, students from St. Sabina Academy in Chicago — a city that has faced its own issues with gun-related homicides — met in Florida with Stoneman Douglas students to discuss ideas to address gun violence.

In an effort to keep the gun debate from dissipating, as it has following past mass shootings, the students have planned a "March for Our Lives" in Washington, D.C., and other cities nationwide on March 24. School walkouts have also been planned for March 14 and April 20, the latter the anniversary of the 1999 school shooting that killed 13 students at Columbine High School in Littleton, Colorado.

"The advocacy by survivors of the Parkland shooting — and young people throughout our nation — is a stark reminder that guns pose an enormous danger to the innocent when they fall into the wrong hands," the bishops said in their statement. "The voices of these advocates should ring in our ears as they describe the peaceful future to which they aspire."

"We must always remember what is at stake as we take actions to safeguard our communities and honor human life," they said. "In the words of St. John, 'let us love not in word or speech but in deed and truth.'"

Justice | US bishops back assault weapons ban, are leery of arming teachers

'Transformation' or no, Gillibrand's candidacy is underwhelming