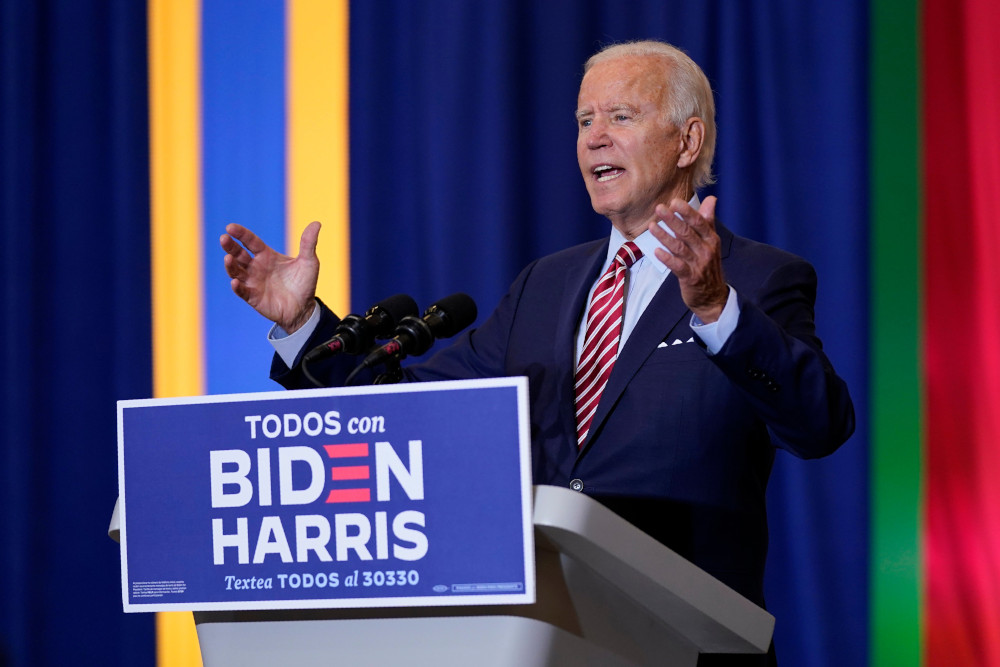 To Andrés Chong-Qui Torres, growing up in an evangelical Pentecostal household and studying at a Jesuit prep school led him to not only develop "an intense love for the Word of God," but to embrace public service and social justice.

His faith grounds him and informs the way he makes everyday decisions, including how he votes. The separation of families at the border, immigrant children held in cages and restrictions to health care access do not reflect Christian values, he said.

That's why Chong-Qui Torres, 32, is voting for the Democratic nominee, former Vice President Joe Biden, and encouraging other Latinos of faith to do the same through the newly launched Creyentes con Biden, which translates to Believers for Biden. Chong-Qui Torres is a volunteer who helped launch the group.

"Now more than ever it's time for people of faith to reconcile our values with the leaders that we choose," he said.

Creyentes con Biden is a subgroup of the Believers for Biden initiative led by Josh Dickson, an evangelical Christian and former Republican who oversees faith engagement for the campaign. The initiative seeks to engage Latino voters from a faith perspective and underscore that Biden, a Catholic, and running mate Kamala Harris, who grew up in a home with both Christian and Hindu religious practices, are aligned with the values of people of faith.

In an interview with Univision, Julie Chávez Rodríguez, granddaughter of farm labor leader César Chávez, referred to Biden as "un hombre de fe," a man of faith. Rodríguez is a senior adviser for the Biden campaign.

The group, leaders say, is necessary as faith and Latinos are expected to play key roles in Florida, Pennsylvania, Texas and Arizona. President Donald Trump, for example, launched Evangelicals for Trump in January by visiting El Rey Jesús Global, a megachurch in Miami led by Latino pastor Guillermo Maldonado.

Creyentes con Biden is focusing on the idea of "loving your neighbors" and being "your brother's keeper." The group is juxtaposing itself against Trump's family separation policies at the border and the dehumanizing language it says he's used when talking about Latinos and immigrants.

The group plans to spotlight Latino Catholic and evangelical voices through virtual events it will be hosting every two weeks. Weekly bilingual phone banks are in the works.

Creyentes con Biden launched their first virtual event just days before more than 50 Latino faith leaders on Sept. 21 publicly endorsed Biden. The faith leaders represent a range of denominations and include the Rev. Elizabeth Rios, the Rev. Salvador Orellana, Pastor Arturo Vargas and Lydia Pena. The endorsement was posted on the Medium platform by Faith 2020, an external group of faith leaders organizing in support of the Biden-Harris campaign.

"We have Latino voices not just represented and included, but really spotlighted," said Dickson.

"For so many Latinos in our country, they look to their faith when making key decisions," he added.

The group held its first event Friday with a Zoom panel that featured U.S. Rep. Juan Vargas of California, a Catholic with a Jesuit background; former Colorado state Sen. Polly Baca; the Rev. Walter Contreras, an evangelical pastor in California; and the Rev. Eli Valentin, a Pentecostal pastor in Pennsylvania.

Valentin, in a Believers for Biden event in August, endorsed Biden for the presidency. It was his first time publicly endorsing presidential candidate. In an article by Faith 2020, Valentin said it was customary to avoid partisan politics "to prevent any awkwardness with parishioners who view things differently."

But it's a moral imperative to vote for Biden, Valentin said, given the treatment of immigrant detainees and the lack of COVID-19 leadership under the current administration.

"Awkwardness is no longer an excuse," he said.

But to others, such as Adriana Maestas, a California-based writer and political observer, faith shouldn't have to be such a central factor.Maestas learned of Creyentes con Biden through Twitter.

"As somebody who watches politics and who probably leans a little bit more on the progressive side, I kind of am not very comfortable with any candidate that needs to announce their faith in such a way, where it's very in your face and real apparent," Maestas said.

To Maestas, who was raised Catholic, displaying Christian values through action should be enough.

"You should just act accordingly, try to project Christ-like qualities and follow the golden rule," she said.