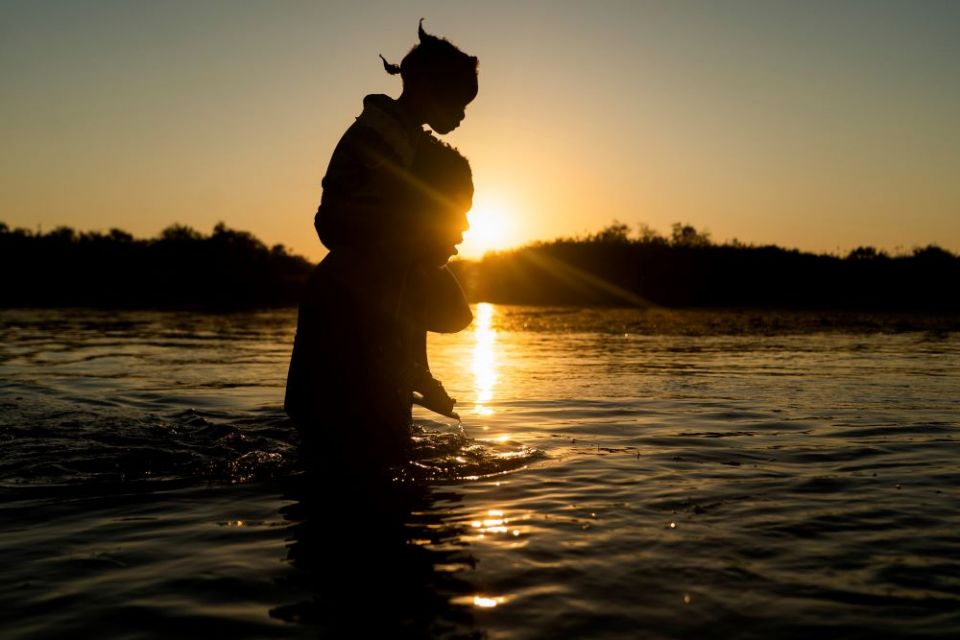 A migrant seeking asylum in the U.S. carries a child on his shoulder Sept. 20 as they cross the Rio Grande back into Mexico near the International Bridge between Mexico and the U.S. (CNS/Reuters/Go Nakamura)

The building crisis at the border threatens to dominate all other news stories as graphic, heart-rending images of desperate people hiding under a bridge or crossing a barren desert lead the news. President Joe Biden needs to reset his approach to immigration and he can start by leaning into his Catholic faith.

It is difficult to characterize what exactly Biden's approach is. At a Sept. 21 Senate hearing, Homeland Security Secretary Alejandro Mayorkas testified to his disgust at the images of border control agents whipping Haitian refugees. "We do not tolerate any mistreatment or abuse of a migrant. Period," he intoned. But in interviews in the past few days, for example this one at NBC, he coldly defended sending Haitians back to that country, ravaged by hurricanes, an earthquake and civil strife.

Criticizing a bureaucrat like Mayorkas for sounding too bureaucratic is a bit unfair. It is the president's job to articulate a vision, a moral framing of an issue, and then explain how the policies he or she is pursuing will help achieve that vision. The political problem now is that in the absence of such a vision, the administration is getting hammered from all sides because it is not clear what they are trying to do, they appear defensive and reactive, and administration officials like Mayorkas end up sounding dispassionate while the images on the nation's TV screens evoke powerful passions.

"Biden ran on a promise to end the inhumanity at the border and reform our immigration laws but on this issue the administration has proven frustratingly skittish at every turn," Dylan Corbett, executive director of the Hope Border Institute, told me in an email.

"Sometimes politicians have to make hard strategic calculations and sometimes the moment demands leadership and courage. This is one of those moments," Corbett said. "Biden needs to marshal a robust moral vision of what protection for the most vulnerable at the border can be and have the gumption to make it happen. This starts by restoring asylum at the border and working hard to get reform done this year." (Emphasis in original.)

It is a shame Biden did not attend a conference this week in Chicago sponsored by the Catholic Extension Society. The conference focused on Pope Francis' vision for the church, but it also offered some insights the Biden team would do well to heed.

Cardinal Michael Czerny, undersecretary of the Migrants and Refugees Section of the Vatican's Dicastery for Promoting Integral Human Development, delivered a keynote address that offered the kind of moral vision the administration lacks. He cited the four things Pope Francis called for when encountering migrants: "to welcome, to protect, to promote and to integrate."

"Biden needs to marshal a robust moral vision of what protection for the most vulnerable at the border can be and have the gumption to make it happen."

The cardinal explained each item, putting a human face and a social context for the activity. For example, in discussing the need to welcome migrants, he discussed the moral significance of borders:

In Catholic Social Teaching terms, we can link welcoming to the virtue of solidarity—the notion that we are all responsible for all, not just people within our own borders. Those borders can be national frontiers, but also the dividing lines between adjacent communities – think of the people from the so-called 'wrong side of the tracks'….

Let's think for a moment about all those borders. They are human contrivances, and we have to be careful. God did not draw those lines. God did not say "I want everyone with this skin color over here and everyone with that accent over there." God does not indulge in us versus them distinctions.

The cardinal’s moral vision allows him to easily situate the human challenges faced by migrants at the border alongside the moral claims of those at the margins in our own society, sowing seeds of empathy:

Welcoming, protecting, promoting and integrating apply to engagement with all the peripheries. The insight comes from migrant and refugee work but it applies to making our society right for people with disabilities, to overcoming barriers against full inclusion of minorities, to overcoming intergenerational poverty in our cities and so on. I would be grateful to hear your examples.

The cardinal went on to discuss the challenges posed by the pandemic and to show how confronting the crisis of migration and the crisis of COVID-19 both illustrate the call to ecclesial conversion Pope Francis has articulated since the beginning of his pontificate, how the peripheries call us to become a field hospital and, in so doing, will renew the wellsprings of our ecclesial identities

At the same conference, Jesuit Fr. Allan Figueroa Deck spoke about "Pope Francis and the Challenge of Ecclesial Introversion." Deck said, "If there is one phrase that captures the Second Vatican Council's and this Pope's project of renewal it is pastoral conversion." And he concluded with a quote from Pope Francis' programmatic text Evangelii gaudium:

I dream of a "missionary option" that is, a missionary impulse capable of transforming everything, so that the Church's customs, ways of doing things, times and schedules, language and structures can be suitably channeled for the evangelization of today's world rather than for her self-preservation. The renewal of structures demanded by pastoral conversion can only be understood in this light: as part of an effort to make them more mission-oriented, to make ordinary pastoral activity on every level more inclusive and open, to inspire in pastoral workers a constant desire to go forth and in this way to elicit a positive response from all those whom Jesus summons to friendship with himself. As John Paul II once said to the Bishops of Oceania: "All renewal in the Church must have mission as its goal if it is not to fall prey to a kind of ecclesial introversion."

Allowing for the differences of church and state, this is what Biden needs to do. He needs to break out of the stale “us vs. them” way of thinking, and the only way to do that it to ask the American people what it means to be an American, what it has always meant to be an American. We do not share a common racial or ethnic heritage. Our cultural heritage is plural, combining distinct and different foods, stories, songs and celebrations with Americanized versions and cross-cultural interpretations, as well as with uniquely American cultural creations.

We are a people who have always been a people becoming. Our roots are intertwined and our goals varied. Our striving after our ideals of freedom and equality are never fully attained. We are a nation of immigrants, not just in terms of our history but also because our ideals still inspire people around the world to come to our shores. Turning our backs on the desperate people of Haiti and Central America and Afghanistan is to deny who we are.

The late Cardinal James Hickey, archbishop of Washington, when asked why the church committed so much time and energy to those on the peripheries in the capital city, famously said, "We shelter the homeless, educate those hungry for knowledge, and care for the sick, not because they're Catholic, but because we’re Catholic."