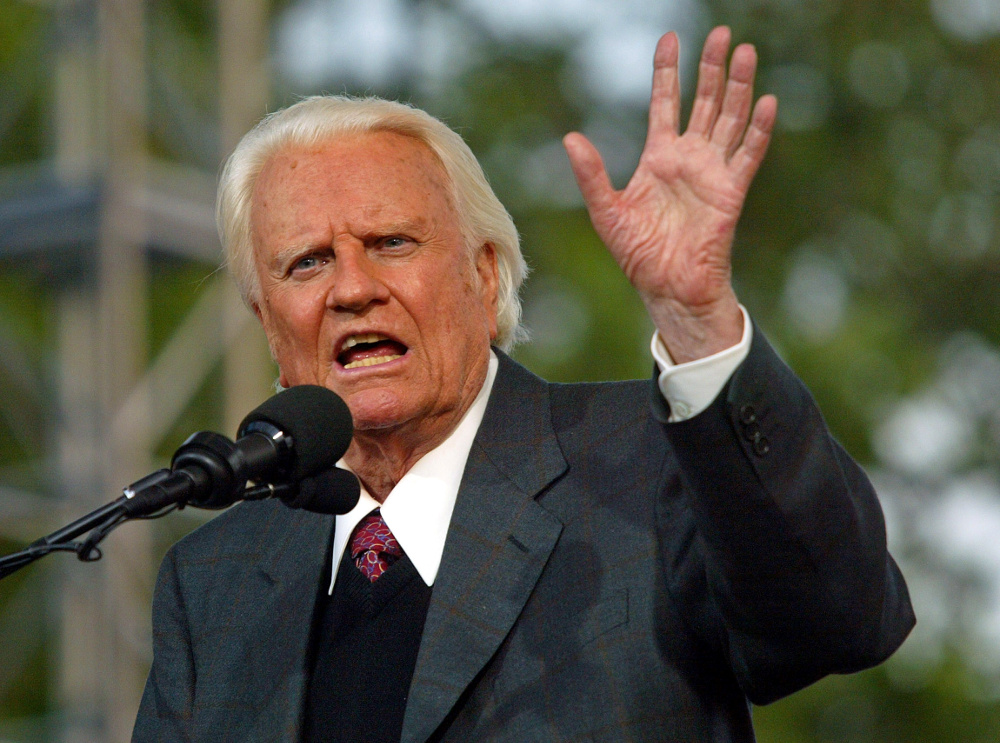 The Rev. Billy Graham, famed preacher who was best known for his televised evangelism broadcasts, died Feb. 21 at his home in North Carolina at age 99. He is pictured in a 2005 photo in New York. (CNS/Shannon Stapleton, Reuters)

When the National Archives released audiotapes in 2002 that revealed evangelist Billy Graham making anti-Semitic remarks during a conversation with President Richard Nixon, the incident was a rare tarnish on the otherwise rosy history between the prominent evangelical leader and the Jewish community.

As Jewish and other non-Christian religious leaders remember Graham, who died on Wednesday (Feb. 21) at age 99, the Nixon tape is on a very short list of blemishes on the relationship between the evangelist and his non-Christian colleagues.

Jewish leaders describe Graham as someone who set Jewish-evangelical relations on the right course.

"What I believe Billy Graham did was he put a positive face on evangelicalism and on evangelicals," said Rabbi Yechiel Eckstein, founder and president of the Chicago- and Jerusalem-based International Fellowship of Christians and Jews.

"He did so without ever compromising his integrity as an evangelical Christian who believed that what all people need is to be saved," said Eckstein, who corresponded during his 30-year career with Graham but never met him face-to-face. "When it came to the Jewish people, he exhibited incredible sensitivity," he said.

Through the years, Graham received numerous awards from Jewish organizations for his work on interfaith relations and on behalf of Soviet Jewry and the state of Israel.

In the early 1970s, when Christian-Jewish dialogues were beginning to strengthen, Graham worked "behind the scenes" on many political issues of great importance to Jews, said Rabbi A. James Rudin, the American Jewish Committee's former director of interfaith affairs. Rudin, who is also a regular Religion News Service commentator, has met with Graham three times since 1973, and has corresponded with him between those meetings.

Graham's advocacy included bringing the issue of the persecution of Soviet Jews to the attention of key Nixon White House officials, including at the State Department, as well as working with leaders to support the state of Israel.

It was during his relationship with the Nixon administration, however, that Graham had a conversation with the president in the Oval Office in which Nixon said he perceived that Jews had a strong influence over American life.

"This stranglehold has got to be broken or the country's going down the drain," said Graham at the time. He later added that though he is friendly with Jewish members of the media, "They don't know how I really feel about what they're doing to this country."

When the tapes were released, they were greeted with universal outrage and confusion, with Rabbi Marvin Hier of the Simon Wiesenthal Center calling the comments "unconscionable" and University of Chicago historian Martin Marty calling them "inexcusable."

Graham quickly apologized for the comments, saying, "They do not reflect my views, and I sincerely apologize for any offense caused by the remarks. Throughout my ministry I have sought to build bridges between Jews and Christians."

Rudin lists the episode as one of two times he was ever deeply disappointed in Graham. The other was when Graham offered a prayer at President Clinton's 1997 inauguration "in the name of the Father, the Son and the Holy Spirit."

In the Oval Office with Nixon, said Rudin, "I expected him, with the moral authority he had by 1972, to say, `I can't agree with you, Mr. President.' "

Though most accepted Graham's apology and consider the incident to be out of character for the evangelist, the episode, Rudin said, "could tarnish his lasting reputation."

Eckstein agreed, saying in 2005: "People are going to remember that two-minute segment that happened 30 years ago."

Discouraged with politics after the Watergate scandal ravaged the Nixon White House, Graham distanced himself from the public policy arena in the 1970s and continued his focus on winning hearts through his evangelical crusades.

Never, however, did Graham single out Jews — or any other ethnic group — for proselytization. In a 1973 Christianity Today article, Graham explicitly articulated his rejection of evangelical efforts that specifically targeted Jews.

"I believe God has always had a special relationship with the Jewish people, as St. Paul suggests in the Book of Romans," he wrote, "In my evangelistic efforts I have never felt called to single out the Jews as Jews nor to single out any other particular groups, cultural, ethnic or religious."

His comments were in response to "Key '73," a major U.S. evangelical initiative that included a specific push to convert Jews. By responding as he did, Graham won the trust and admiration of many Jewish leaders.

"He wouldn't go door to door looking for signs on the door saying `Goldberg,' `Sternberg' or `Cohen,' " said Eckstein.

Graham again spoke against efforts to single out Jews for evangelization in 2000, when the Southern Baptist Convention, the denomination in which he was ordained, launched a proselytizing effort in Chicago.

In addition to thinking highly of Graham for his avoidance of targeted missionizing, non-Christian religious leaders admired Graham as a man of moral integrity and faith.

Graham was "held in high regard by people of all faiths, Muslims included," said Ibrahim Hooper, spokesman for the Washington-based Council on American-Islamic Relations.

But unlike with the Jewish community, Graham did not leave a legacy of interaction and relationship with the Muslim community.

Some Muslim leaders said they wished Graham had reached out more to their community. Many Muslims read Graham's columns and listened to his sermons, said Sayyid Syeed of the Indianapolis-based Islamic Society of North America.

But when a Graham crusade came to Indianapolis in 1999, Syeed was disappointed when his invitation to have Graham visit the organization went unanswered.

However, at what was certainly a challenging moment for American Muslims, in the wake of the Sept. 11, 2001, terrorist attacks, Graham did connect with a Muslim leader at a crucial moment.

At the National Day of Prayer and Remembrance service at the National Cathedral in Washington, Graham shared the stage with Imam Muzammil Siddiqi, chairman of the Islamic Law Council of North America.

"He expressed understanding and sympathy for the Muslim people and for Islam," Siddiqi recalls of his conversation that day with Graham. "I explained to him that what had happened does not represent Islam, and we as Muslims condemned it. He accepted that," he said.

Following the terrorist attacks, and the outcry President Bush received when he used the word "crusade" to describe the war on terrorism, Graham briefly began calling his evangelical gatherings "campaigns" instead of "crusades," something Syeed says he appreciated. Graham's association revived the term "crusade" in 2004.

But Muslims were disappointed when Graham's son and heir to his organization, Franklin Graham, said in 2001 that "the God of Islam is not the same God" worshipped by Christians and Jews. Though Muslims are concerned about the future relationship with the Graham organization, they say the younger Graham's comments do not affect their views of the elder.

"I don't think anyone would blame the father for what the son has said," said CAIR's Hooper.