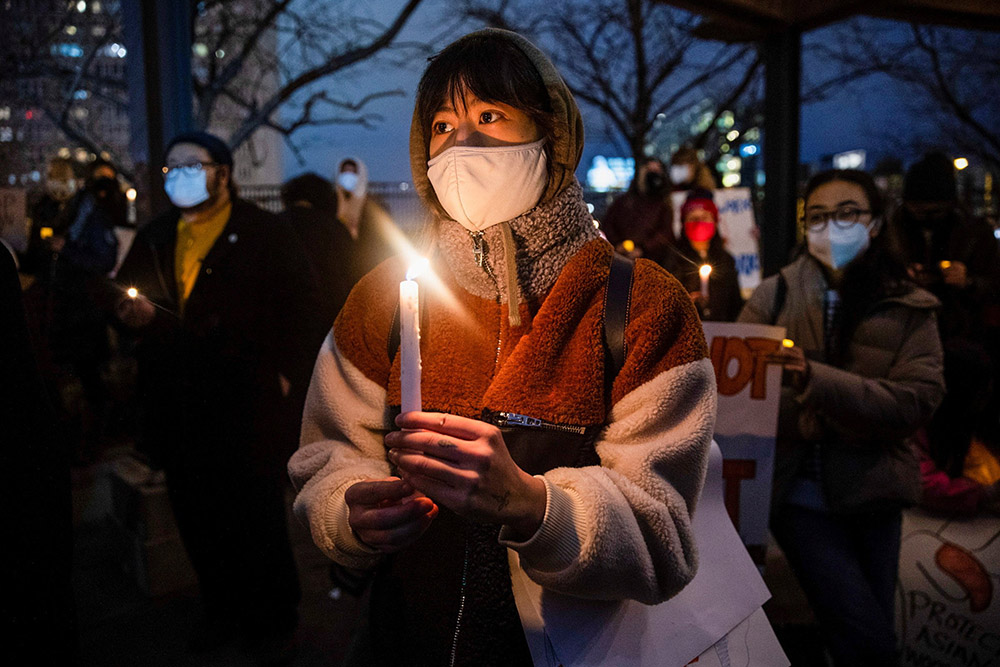 People in Philadelphia attend a vigil in solidarity with the Asian American community March 17. (CNS/Reuters/Rachel Wisniewski)

In the days since a white gunman killed eight people, including six women of Asian descent, in shootings at two spas in the Atlanta area on March 16, several U.S. bishops have released statements condemning violence against Asian Americans, which has spiked during the pandemic.

"When an attack of this kind happens, we have to be aware of the possibility that it could, tragically, lead to more violence. We don't know the circumstances of this case, and that work is better left to civil authorities, but we do know members of the Asian community have found themselves the object of hateful speech and actions in the past year," Atlanta Archbishop Gregory Hartmayer said in a statement.

Anti-Asian hate crimes surged by 149% in 16 of the country's largest cities in 2020, while the total number of hate crimes decreased by 7%, according to the Center for the Study of Hate and Extremism at California State University, San Bernardino.

"We pray for all who suffer racist violence and hate speech. There can be no place for either in our society, and it is incumbent on all of us to resist language, culture and acts that denigrate Asian Americans and all people of color — because they have deadly consequences," Cupich said in a Mar. 18 statement.

"When people make racist comments or jokes, it normalizes bigotry, reinforces racism and risks encouraging those who would commit hate crimes," Cupich said. "It is incumbent on all Christians, all Americans, to resist subtle and overt acts of bigotry, to build up the common good through acts of love for all our neighbors, near and far."

The national Catholic peace activist group Pax Christi condemned the Atlanta shootings as a result of ongoing "racial hatred and our nation's inability to address gun violence" in its statement.

"A recent study by Stop AAPI Hate documents the rise in violence against Asian Americans and Pacific Islanders over the past year, marked by a pandemic which some of our leaders have not only politicized for their own agendas but racialized as well. It is in that context that we see clearly where fanning the flames of racism leads," Pax Christi said.

Bishop Mark Brennan of Wheeling-Charleston, West Virginia, has also issued a statement condemning violence against Asian Americans and linking it to the United States' history of prejudicial policies against people of Asian descent, including the Chinese Exclusion Act and Japanese internment during World War II.

"Along with millions of other Americans, I deplore and condemn the recent deadly attacks on Asian Americans in Georgia and other incidents of violence against them elsewhere," Brennan wrote.

Last May, Philadelphia Archbishop Nelson Pérez, chair of the U.S. Conference of Catholic Bishops' Committee for Cultural Diversity in the Church; Salt Lake City Bishop Oscar Solis, chair of the bishops' Subcommittee on Asian and Pacific Island Affairs; and Houma-Thibodaux, Louisiana, Bishop Shelton Fabre, chair of the Ad Hoc Committee Against Racism, issued a statement expressing alarm about "the increase in reported incidents of bullying and verbal and physical assaults, particularly against Americans of Asian and Pacific Island heritage."

Between March 2020 and February 2021, the nonprofit group Stop AAPI Hate received reports of more than 3,700 hate incidents. The March 16, 2021, shootings have been the most deadly and widely reported instance of violence against Asian Americans during the pandemic, but other attacks have occurred even this week. On March 17, a white man attacked two elderly Asian Americans in San Francisco.

On Friday, March 19, President Joe Biden addressed the "skyrocketing spike" in violence against Asian Americans in a speech given in Atlanta.