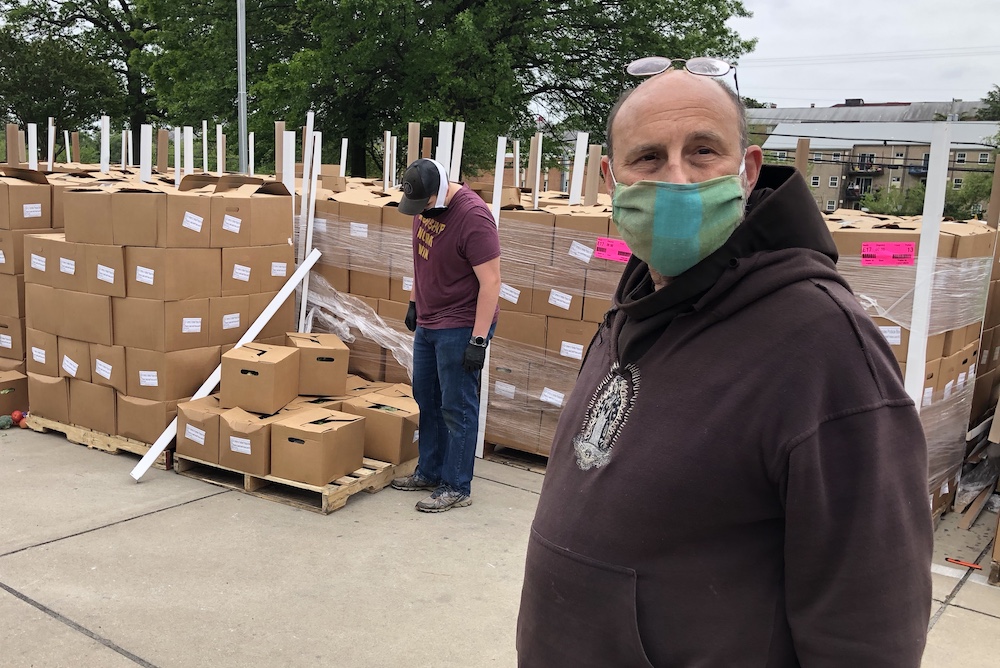 Franciscan Fr. Chris Posch, a longtime advocate for minority communities and the pastor at the largest parish in the Washington Archdiocese, passed away July 5 at the age of 58.

"With deep sadness, we share with you that Br. Chris died very quickly this morning from bilateral pneumonia and septic shock. Chris and his doctors battled his pneumonia for a month," St. Camillus Parish in Silver Spring, Maryland, announced in a July 5 newsletter.

Posch, who went by "Brother Chris," became pastor of St. Camillus in May of 2016 after being transferred from the Diocese of Wilmington, Delaware, where he led the diocese's Hispanic Ministry for nearly 18 years.

Members of Posch's community described him as a humble, approachable and hardworking leader who saw himself, above all else, as a servant.

"Brother Chris is probably the purest and most genuine Christian I've ever encountered in my life," said Toby Harkleroad, principal of St. Francis International School, St. Camillus' parish school. "He just exuded a joy for the Gospel in ways that were never pretentious."

Posch was ordained in 1995 and began working in Wilmington three years later when the late Bishop Michael Saltarelli looked to establish a Hispanic Ministry for a growing Latino population in Delaware, according to Delaware Online. During his tenure there, Posch was credited with expanding the number of U.S. churches that offer Mass in Spanish, as well as making newly arrived Latino immigrants feel welcome in their new diocese.

"He didn't care if he had to drive two hours or three hours just for a Mass. He just wanted people to know that God was there," Junior Ortega, a member of St. Paul's Catholic Church in Wilmington, told Delaware Online in 2016. "He was communicating with everyone. Remember that love is a way to communicate with people."

Posch brought that same level of devotion to service and drive to connect with others to St. Camillus, where he listed himself not as "Pastor" in the parish bulletin, but as "Servant."

St. Camillus is a Franciscan parish with about 80 countries represented in its congregation of roughly 2,300 registered households. In March, Posch told NCR that number is likely an undercount because "we suspect that many of our parishioners don't register because that's not the custom in their home countries," which include states in Latin America, Europe, Africa and Asia. 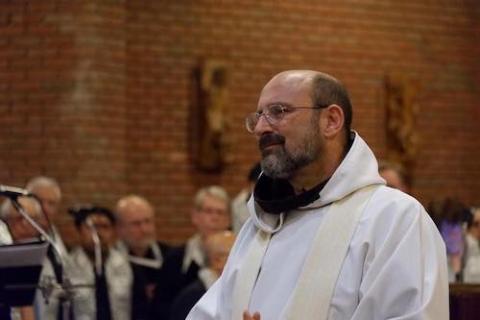 Harkleroad said Posch brought an "intercultural mindset that really carried St. Camillus and St. Francis International School into another level in terms of our ability to live the diversity that we have."

Harkleroad described Posch's leadership style as one rooted in collaboration and dialogue. He was always encouraging others to share their stories and perspectives, Hackleroad said.

Posch was also an ardent listener — a trait epitomized by the little notebook he carried everywhere he went, used to take notes on conversations he had and remember the names of people he met. Posch prayed for every one of those names in his book, Harkleroad said.

"I think people did not realize all the time how much he was listening," Harkleroad said.

Harkleroad saw Posch's habit of turning listening to action in his first week as pastor. Maryland had just launched a new tuition scholarship program for students to attend non-public schools, and Posch had only been at the parish for a day when Harkleroad excitedly told him how the new program could help many local Latino families cover huge portions of their tuition at St. Francis International School. 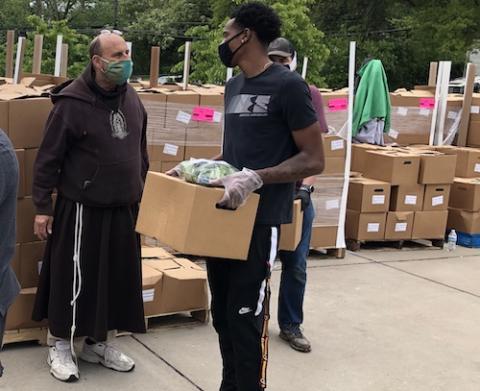 Franciscan Fr. Chris Posch, left, talks to a man at the food distribution center at the Langley Park Community Center in Hyattsville, Maryland, in 2020 (Courtesy of St. Camillus Parish)

"Within days of arriving in the parish, he came back to me with handwritten notes of families that he had talked to, at houses that he had gone to, that would potentially have new children come to our school if they could get the scholarship," Harkleroad said. "By the end of that summer, we became the largest recipient of those scholarships of any school in the state."

Parishioner Mayra Mejia said she will always remember Posch's "love for community" and passion for uniting the parish's many diverse ethnic groups into "one multicultural community."

According to Mejia, Posch fostered this sense of unity by forming an Intercultural Group consisting of lay leaders from across St. Camillus' diverse backgrounds. Launched in July of 2016, the new ministry's task was to organize and lead multicultural events at the parish.

Parishioner Seikor Bundu, an immigrant from Sierra Leone and the former president of the African Catholic Association of the D.M.V. (for Washington, D.C., Maryland and Virginia), joined the Intercultural Group two years ago. He said the group's mission to build real acceptance between cultural groups, rather than just tolerance, is an example of Posch's leadership.

"He made us disciples of the way he saw church, and we should pick up that vision and continue with it," Bundu said. "Going to church is one thing, but leaving the church to go and interact with one another in communities and ministries makes you more effective as a Christian."

"He was just so encouraging," said Harkleroad, the principal. "He was overjoyed in a way that I haven't experienced from anyone else, as if he really understood the call and what it means to follow your vocation."

Franciscan Fr. Jacek Orzechowski, who worked with Posch at St. Camillus for a year and has since remained a parishioner, called Posch a "good administrator and hard worker." Important qualities for the pastor of a parish with 160 working ministries, including a parish mission that supports low-income immigrant families in nearby Langley Park.

But Orzechowski told NCR he thinks Posch's joy might be what the community will miss most of all. Right now, the community is certainly grieving, yet Orzechowski believes that "the time and effort and love that [Posch] invested into helping the community grow and mature" by empowering others is sure to have a lasting impact.

At the entrance of St. Camillus, there's a welcome sign with a quote from Luke's Gospel draped across it. "I will be among you as the one who serves," it reads. Orzechowski said he can't think of a more appropriate quote to reflect Posch's legacy.

"[Posch] is going to be here as the ones who serve," Orzechowski said. "He has enabled so many people from this parish to wake up and to take ownership of the Gospel."

A version of this story appeared in the July 24-Aug 6, 2020 print issue under the headline: A joy-filled servant pastor remembered.