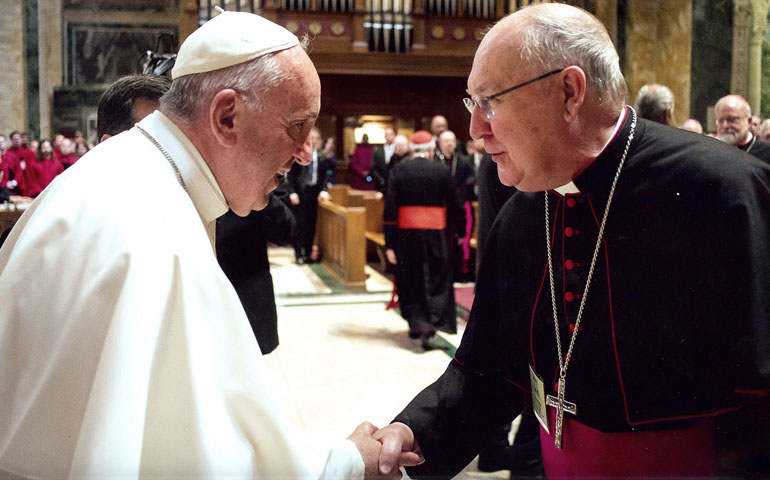 Emboldened by Pope Francis, church reformers are endorsing a call by the Brazilian bishops for a Year of the Laity, expanded to include conferences and observances around the world from November of this year until November 2018.

The meetings will focus on why "the people of God need to be treated equally in the church" and "the people taking the Gospel out into the world," Rene Reid, director of Catholic Church Reform International, told NCR.

Groups lining up in support of the Year of the Laity include Catholic Church Reform International as well as Call to Action, she said. Participants from those groups will be urging an increased role for the laity in the church. They will promote lay participation in the selection of bishops, an end to mandatory celibacy for clergy and openness to allowing the Eucharist for divorced and remarried Catholics as well as the LGBTQ community.

Reid said the impetus for the movement comes from Pope Francis. "He wants the people of God to step up and take a leadership role, and we are," she said.

Catholic Church Reform International began in 2013, after Reid took a pilgrimage to Spain, walking the Camino de Santiago and reflecting upon Pope Francis' call for change in the church. A writer, former religious and director of religious education, Reid, based in Reno, Nevada, was inspired to connect church reform groups around the world. Thanks to the internet, she has made extensive connections.

She said that priorities for discussion during the Year of the Laity gatherings will focus on concerns of local churches. In Brazil, that can mean an interest in land reform. In India, Reid said, Catholics are concerned about the roadblocks to interfaith marriages placed on Catholics. In Kenya, there is interest in allowing ordination for lay people to lead the Eucharist in isolated communities where priests rarely go.

The meetings planned for the Year of the Laity are to take place in 2018 in Londrina, Brazil, in January; near Dallas, Texas, in October; and in San Antonio, Texas, and Aparecida, Brazil, both in November, to close out the official year.

The Catholic Church Reform International website promoting the Year of the Laity says that its purpose is to "have the People of God from around the world actively supporting Pope Francis's vision for a decentralized Church that addresses the needs of the local dioceses and is universally more welcoming and less judgmental. But for the renewal of the Church to actually come from the People, the People must become more active in Church governance."

Catholic Church Reform International has asked Cardinal Kevin Farrell, who heads the newly established Vatican Dicastery for the Laity, Family and Life, to encourage bishops to endorse the Year of the Laity. So far, there has been no formal endorsement.

Astrid Lobo Gajiwala, a member of the planning committee from India, said she hopes that the conferences will explore ordaining women as deacons. She also said that the situation of the Dalit, a tribe in India among the poorest of the poor, and who constitute the majority of Catholics in the country, should be addressed.

Christina Reymer, a member of the planning committee from Hamilton, New Zealand, said she is concerned about her five adult children and their relationship to the Catholic faith, and hopes that the planned Year of the Laity will make the church more relevant for millennials.

"I hope for a new church to emerge out of the ashes of this crumbling edifice we are witnessing — one that is inclusive, and welcoming of all, one that my children could feel connected to, relevant and inspiring," she wrote in an email to NCR.

Her children, she said, reflect the diversity of young Catholics. One is a rocket scientist, who believes God is a human construction and no longer relevant. Another she described as a traditional, pre-Vatican II Catholic, who prefers the Latin Mass and is an attorney. Another is a gay man, pursuing a career in international politics. The other two are in business. All have an international perspective.

The Year of the Laity is needed, she said, because "we are treated by church hierarchy as children who are never allowed to grow up. The old model of 'pray, pay and obey' is all that we are expected to be satisfied with. It simply is not good enough."