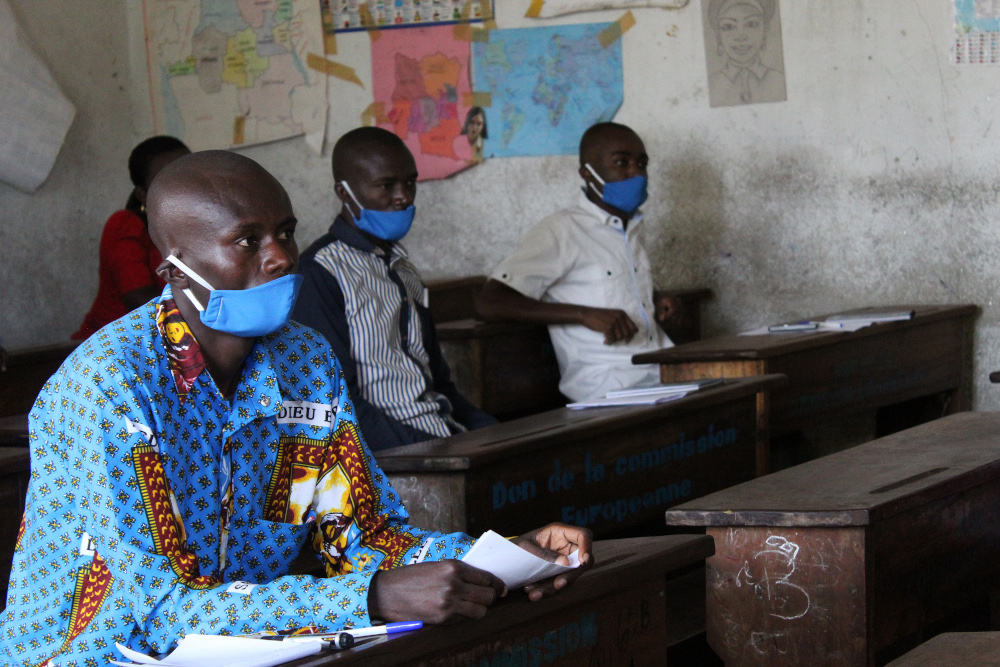 Teachers take part in a training program in Goma, Congo, June 5, 2020, for the preventive measures to avoid the spread of COVID-19. As Congo battles the pandemic, a new Ebola outbreak has resurfaced in the northwest, as authorities prepared to declare the end of the main Ebola epidemic in three eastern provinces. (CNS/Carolina Meroni, courtesy AVSI)

As Congo battles the COVID-19 pandemic, a new Ebola outbreak has resurfaced in the northwest, just as authorities were prepared to declare the end of Ebola in three eastern provinces.

The cases were confirmed in Mbandaka, a port city on River Congo May 31. By June 8, there were 12 cases, nine of which had been confirmed and three considered probable. Eight people have since died, including a 15-year-old girl, in the region where another outbreak ended about two years ago.

He said in the east and in northwest Congo, the existing coordination structures and response teams fighting Ebola were also the same leading the fight against COVID-19.

"The number of outbreaks and health emergencies faced by these structures poses a great challenge," said Mukuna.

Ebola is named after a river in Congo, where it was discovered in 1976. Key symptoms include fever, bleeding, weakness and abdominal pain. It is transmitted through contact with sick or dead people or animals.

The virus has killed nearly 2,300 people out of more than 3,400 infections since August 2018, when the latest outbreak began. The outbreak is considered the largest in the country and the second-largest in the world after the 2014-2016 outbreak in West Africa.

"I don't think the new outbreak in Mbandaka will spread," said Fr. Arsene Masumbuko, who works for Caritas in North Kivu. "Teams have been swift in responding. The people are also well educated to prevent and care for themselves against Ebola. The church has been part of the process."

Carolina Meroni, external relations manager of the AVSI Foundation in Congo, said for several years, the country had faced a serious and acute humanitarian crisis.

"From a health point of view, the country is characterized by the presence of diseases such as measles, cholera, malaria, Ebola and now also COVID-19," Meroni told Catholic News Service June 10.

The last person with Ebola in eastern Congo was declared cured May 15, and no new cases were identified for 26 days.

But Meroni said the numerous epidemics in the country had generated mistrust toward humanitarian workers.

"We often hear that NGOs bring Ebola into the communities or that the virus does not exist and was invented for business reasons. This attitude is also true of the coronavirus," said Meroni, whose Catholic-founded organization works in education and child protection in Congo.

The country recorded its first COVID-19 case in March and, by June 11, the country had more than 4,500 confirmed cases, with the highest concentration being in Kinshasa, the capital. Just like Ebola, the disease has been greeted with doubts and superstition.

"Some people claim that this virus (COVID-19) does not exist, but that it is a way for those who worked in the Ebola response in the east of the country not to lose their jobs. They, therefore, claim that COVID has come to replace Ebola," said Meroni.

She explained that the people are heard frequently claiming that certain categories are immune to the virus (e.g. people in economic difficulties), while others are extremely at risk (white and rich people, for example).

"This obviously poses serious problems when trying to contain the spread of the virus," said Meroni.

Foundation officials said one of the biggest lessons learned from the Ebola outbreak was the need to improve communication with communities.

"I believe that one of the mistakes made was to only give priority, at the beginning of the epidemics, to the medical response, without taking into account the community acceptance of the activities," said Meroni.