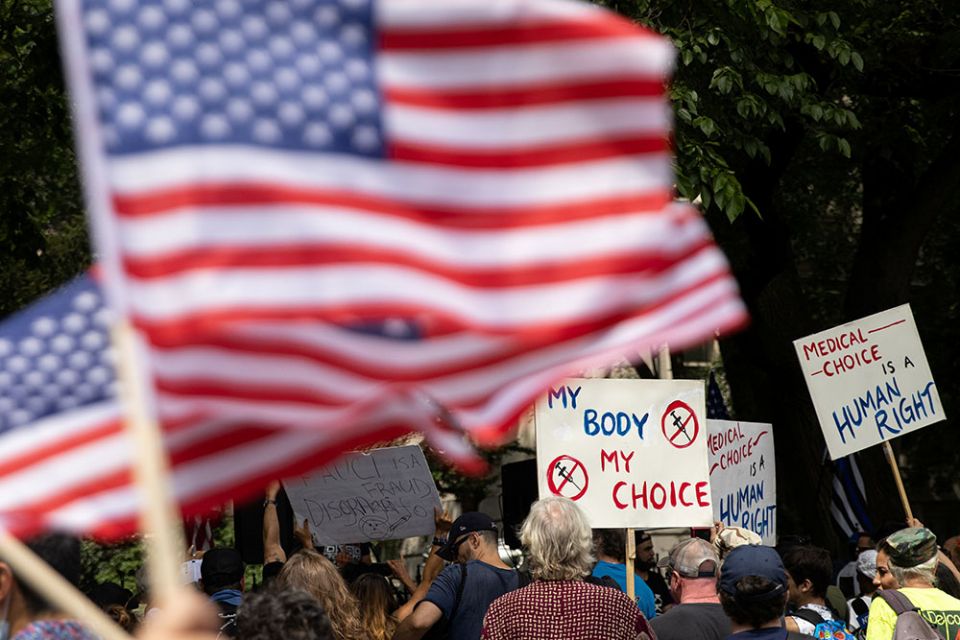 People are seen outside New York City Hall in Manhattan during a protest against mandating COVID-19 vaccines Aug. 16. (CNS/Reuters/Jeenah Moon)

Oh, my! Did I hurt the feelings of the experts at the National Catholic Bioethics Center? Last week, I called attention to its foolish defense of "vaccine hesitancy" and, more importantly, its flirtation with the idea that there are well-grounded moral reasons to object to getting the vaccine.

Now, the center has issued a statement that, among other things, says, "The NCBC notes with great sadness the increasingly heated rhetoric and even violence associated with the vaccine mandate debates."

You know what makes me sad? Watching people die from COVID-19 unnecessarily because culture warriors insist that the vaccines are morally compromised because of a very remote connection to an abortion that happened decades ago.

The statement goes on to affirm, more clearly than the organization had done previously, that the Catholic Church "encourages" everyone to get the vaccine and that the relationship of the vaccine to an abortion-derived stem cell line does not establish moral qualms about the vaccine.

The center's statement is still more wishy-washy than the situation — this is a pandemic! — demands. After saying the church encourages the vaccine, it states: "The NCBC noted in our Vaccine Exemption Resource for Individuals that the Church permits people to use any of the currently available COVID-19 vaccines."

Related: Catholics have no grounds to claim exemption from COVID vaccine mandates

Permits? The verb is not inaccurate, but it is not exact either. It is grudging and grudging in a way that reflects the individualistic approach to the issue that has plagued the center's analysis from the beginning: the idea that a conscience need only wrestle with its own concerns, and not also consider what a moral agent owes to other persons.

Can you imagine the National Catholic Bioethics Center adopting this kind of wishy-washy language in regard to, say, drunk driving? "The Church permits the consumption of alcohol, and it permits driving a car, so while we don't recommend doing the two things at the same time, we believe people have a right to conscientious objection from laws that punish drunk driving."

The center's ambiguity about the vaccine sounds a great deal like the stance taken by former President Donald Trump and his acolytes. In an interview on Fox News this week, Trump began by praising the vaccines but he couldn't stay on script, bashing the idea of "booster shots" and criticizing the CEO of Pfizer for looking to make money. "You know, when these first came out, they were good for life," he said, apparently unaware that the Delta variant was not around when the vaccines "first came out."

Govs. Ron DeSantis of Florida and Greg Abbott of Texas have similarly offered only lukewarm encouragement to their citizens to get vaccinated, and never miss an opportunity to defend the rights of those who do not wish to get vaccinated. DeSantis has now stopped vaccine promotion efforts in his state. In Austin, Abbott has been diagnosed with the virus.

Of course, the politicians have to keep an eye on fundraising for their campaigns. Is that one of the reasons the bioethics center is so ambiguous? Do its funders demand ambiguity?

If not the funders of the center, what about the bishops on its board?

You did not find these ambiguous statements in the recent video call for people to get vaccines that featured Pope Francis, several cardinals and the president of the U.S. bishops' conference, Archbishop José Gomez. Gomez, along with several other U.S. bishops, has told his priests not to sign form letters stating that parishioners should qualify for a religious exemption from the vaccines.

Cardinal Blase Cupich sent a letter this week to his priests that was a study in clarity:

Therefore, if you are asked to offer such testimony, please politely decline and explain that doing so would mean that you would be endorsing something that is not in keeping with Catholic teaching. Parishioners surely can determine their own actions, but it would be important to clarify that they cannot use the teaching of the church to justify such decisions, which in their essence, are a rejection of the church's authentic moral teaching regarding Covid vaccines.

The National Catholic Bioethics Center had drafted a sample form letter for parishioners to ask their pastors to sign.

Two facts about moral theology stand out from this imbroglio about vaccines and vaccine mandates. First, there might well be religious reasons to decline a vaccine, but none of those reasons are Catholic reasons. You cannot isolate the church's teachings on the evil of abortion from the rest of our teaching, and you can't distort the church's teaching about what does and does not constitute complicity with evil in order to achieve a result that pleases your culture warrior base. Yet, that is exactly the kind of distortion of Catholic moral teaching that is essential for those arguing that President Joe Biden should be denied Communion.

No one, so far as I know, is arguing that people who do not want to get vaccinated should be strapped to a gurney and given a vaccine against their will. What many of us are arguing is that if you want to continue to participate in our society, to dine in common spaces, learn or teach at schools, work in a shared office space, you need to show sufficient respect for the health of your co-workers, and sufficient self-respect, that you get vaccinated against the deadly threat to all.

I suppose in some legal sense, a person has a right to refuse a vaccine and go live in the wild, but there is nothing in the Catholic moral tradition that supports that kind of a choice, and our moral tradition explicitly contradicts the libertarian idea "My body, my choice."

Second, bioethics has become for some what religious liberty is for others, a hyper-individualistic moral enterprise that focuses only on one's own personal preferences. The center acknowledges that Catholics have an obligation to promote the common good, but it only spills ink about the abortion-derived stem cells. Religious liberty zealots tend to focus only on what others cannot make us do, and rarely on what we owe fellow citizens with whom we disagree. Both distort the Catholic tradition that is rich and supple, quite different from the state of perpetual conflict the culture wars demand.

We can all hope that the bishops will take an increasingly united stance following the lead of Francis, encouraging people to get vaccinated as an act of charity for themselves and for the commonwealth. Perhaps we should say for the commonhealth!

If this happy result is achieved, and more and more people get vaccinated, there will be time enough to ask the question about what the word "Catholic" means to the leaders of the National Catholic Bioethics Center.