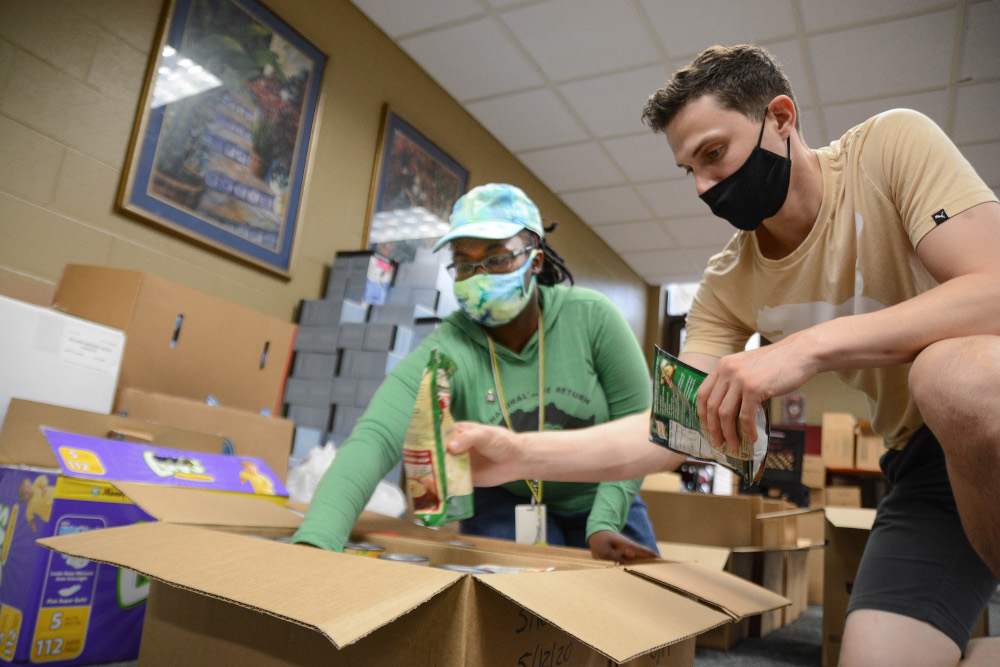 Andrea Dowlen, left, an Americorps worker with Catholic Charities of Tennessee, and Matthew Grimes, a Catholic Charities volunteer, fill emergency food boxes July 7, 2020, for people who have been affected by the COVID-19 pandemic and the March 3 tornadoes. The boxes contain enough food to feed two people for five to seven meals. (CNS/Tennessee Register/Andy Telli)

Middle Tennessee's immigrant and refugee communities have been hit particularly hard by the COVID-19 virus.

In response, parishes and Catholic Charities of Tennessee have been trying to provide the spiritual and material support they need to persevere through the pandemic.

"We have some parishioners, they are very, very sick," said Fr. David Ramirez, the director of the Diocese of Nashville's Hispanic Ministry, who also ministers at Sagrado Corazon Church at the Nashville Diocese's Catholic Pastoral Center.

Ramirez and Fr. Alejandro Godinez of the diocese's Hispanic ministry also minister to several other Spanish-speaking communities around the diocese.

Several of the affected families at St. John Vianney included members who worked at a Gallatin nursing home, where the virus swept through and left more than two dozen residents dead.

Ramirez has presided over three funerals for parishioners who have died from the virus.

"People are afraid," Ramirez told the Tennessee Register, Nashville's diocesan newspaper. "They are taking care of their families."

Some of his parishioners are afraid to get help because of their immigration status, Ramirez said. And others are afraid that if they go to the hospital they will die.

"I had one family who told me, 'When my brother went to the hospital he was OK. ... But the next day he died.' The hospital told them it was the virus," said Ramirez, who told his parishioner to trust the doctors. "If somebody feels bad, you have to go quickly to the doctor."

The staff at Sagrado Corazon prepared a video for the church's Facebook page explaining all the precautions people should take when attending Mass to avoid spreading the virus. "At every Mass, Father Alejandro and I, we talk to the people about that."

Fr. Anthony Lopez, pastor of Our Lady of Lourdes Parish in Springfield and St. Michael Mission in Cedar Hill, also has also had a parishioner die of the COVID-19 virus.

The parishioner who died was 89 and a member at St. Michael. Lopez was able to visit her in the hospital before she died.

Dressed in protective equipment, he stood in the doorway of her hospital room and administered the prayers for the dying.

"Normally, I like to anoint all the senses, but I couldn't do that," Lopez said. "I thought, Lord, you have this. ... Let's give this lady this precious sacrament so, when her journey is completed and the transition is made, she will be ensured of her eternal salvation."

Lopez also saw several cases of the virus hit families in the large and active Hispanic community in his parish of Our Lady of Lourdes. One man who tested positive for the virus had attended a parish council meeting, and two families had members test positive after they attended a birthday party, Lopez said.

Although Nashville Bishop J. Mark Spalding allowed parishes to resume public celebrations of Mass beginning May 18, Lopez waited to start at Our Lady of Lourdes and St. Michael until Pentecost Sunday, May 31.

After discussing it with Deacon Michael Morris, who is in a high-risk category, Lopez took his advice to go slow with reopening Mass to the public.

"I decided perhaps he's right because we don't need to expose people when Robertson County has so many cases," Lopez said. The county has at least 859 cases, the 11th most among counties in Tennessee; at least 11 have died from the disease.

"But one never knows," Lopez said. "That's the scary thing about this whole thing is that one simply does not know."

The Hispanic parishioners who had tested positive have all recovered, and Our Lady of Lourdes and St. Michael have resumed the public celebration of Mass. "Everyone has been super ultra-cooperative' following the guidelines for social distancing and wearing masks, Lopez said. "That is very, very encouraging to me."

Yet, some of his parishioners still have reservations about gathering in public places like a church, he said. "And I completely, completely understand that."

"I think the Lord is going to provide and take care of us," Lopez said. "We're trusting in him that the numbers (of people at Mass) will increase as time goes on. We see people are getting out."

Both Lopez and the parish office manager were tested for the virus and both were clear of the disease.

"We need to be here for our people," he said. "We need to make sure we're healthy and we give them what they need, which is the blessed sacraments, especially the holy Eucharist, which is the source and summit of our faith."

The Hispanic community is not the only group that has been hit hard by the COVID-19 virus.

Others affected have included the Bhutanese community, which had over 130 families who had a family member who tested positive, according to said Kellye Branson, director of refugee and immigration services for Catholic Charities of Tennessee.

Many immigrants and refugees "work in settings where they've had large outbreaks," Branson said. "One person gets sick at work and infects other family members."

It's common among immigrant families to have three generations living together, Branson noted, and if family members get sick, "they're not really able to isolate at home."