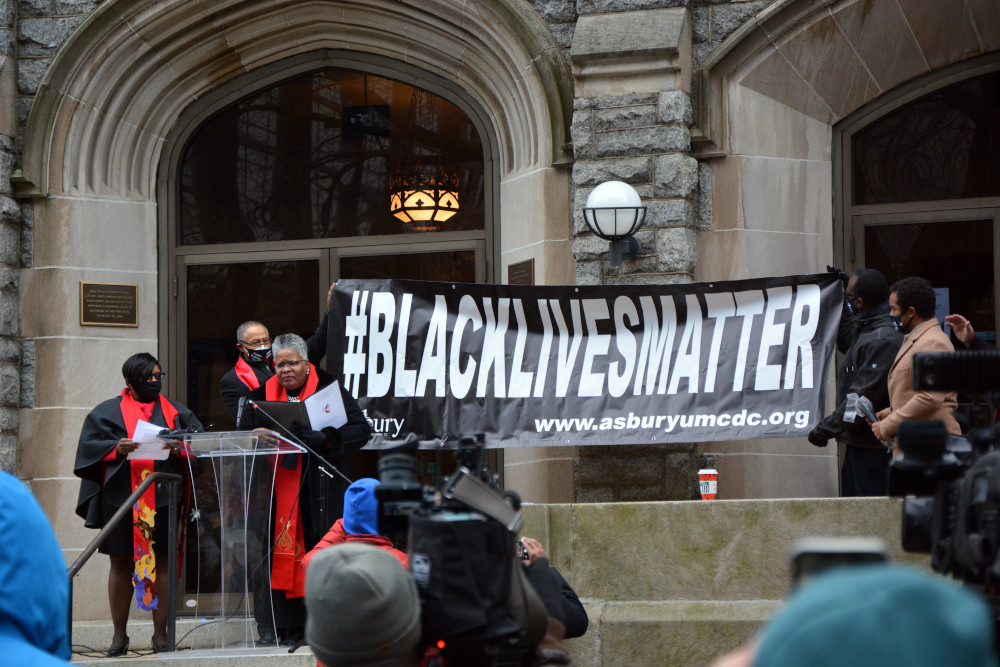 Asbury United Methodist Church in Washington replaced a Black Lives Matter sign Dec. 18 that was taken from its grounds and set aflame the previous weekend by members of the Proud Boys.

According to police, Asbury was one of four churches that endured property destruction the weekend of Dec. 12 and Dec. 13 after supporters of President Trump descended on the city to protest President-elect Biden's victory.

The Rev. Ianther M. Mills, Asbury's pastor who characterized the sign burning as "reminiscent of cross burnings," opened up the event, framed as a defiant rejection of racist hatred. Before a crowd of religious leaders and journalists, she declared her historic Black church remains "committed to continuing our stand for social justice and racial justice."

She was later followed by Bishop LaTrelle Easterling, who oversees the Baltimore-Washington Conference of the UMC. Citing Jesus' teachings to stand with the oppressed, she decried the destruction of the original banner.

Police announced during the week they are investigating the incidents as possible hate crimes and noted in a press conference that nearby Mt. Vernon Place United Methodist also reported property destruction.

"We will bless this sign, the one that will be in our midst, in the name of our God of mercy who sent Jesus to set the captives free," she said.

"[We are] blessing this banner as a visible sign of our commitment to Black Lives Matter." 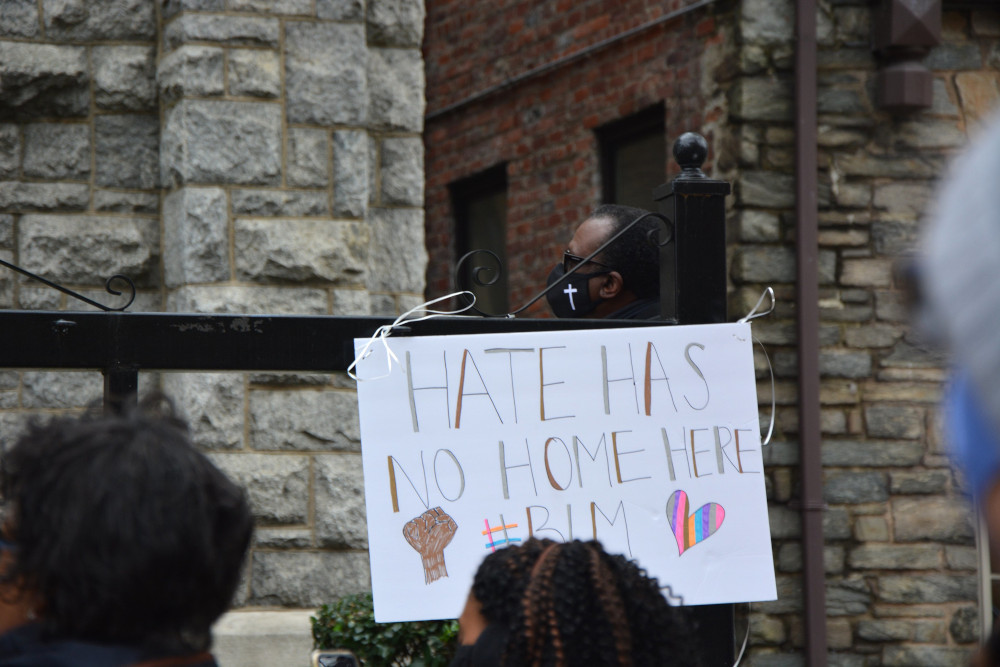 Black Baptist leaders and local city officials also spoke at the event, as did the head of the National Council of Churches, which encompasses 38 member communions and over 40 million individuals.

Meanwhile, a growing chorus of religious groups have spoken out against the sign destruction. On the evening of Dec. 17, the National Association of Evangelicals published a statement condemning the acts.

"The National Association of Evangelicals (NAE) condemns the recent destruction of property outside historic Black churches in Washington, D.C., and stands in solidarity with their leaders and members to combat attitudes and systems that perpetuate racism," the statement read.

The Washington National Cathedral and the bishop of the Episcopal Diocese of Washington also railed against the attacks earlier in the week, saying they "reject the version of Christianity that seeks to provide a mantle of spiritual authority to the poison of White nationalism." They also suggested the culprits were guilty of "idolatry," or "the worship of someone other than God as though he were God."

Wesley Seminary President David McAllister-Wilson appeared to make reference to Trump when he spoke at the sign unveiling on Dec. 18, saying those who destroyed the original banner were "led by a ringleader who cannot be charged, but who nonetheless instigated this act."

When Religion News Service asked White House spokesman Judd Deere about the sign-burning and McAllister-Wilson's remarks, he responded: "President Trump condemns violence in all forms and any group that expounds hate and bigotry."

The sign destruction by Proud Boys came several hours after the religiously themed "Jericho March" on the National Mall, where faith leaders and others prayed for Trump and repeated widely discredited claims that voter fraud cost the president reelection.

The Jericho March was emceed by evangelical commentator Eric Metaxas, who was filmed punching an anti-Trump demonstrator off his bike earlier this year. The event did not feature speeches from members of the "Proud Boys."

At least three men who spoke at the Jericho March — including conspiracy theorist Alex Jones — addressed a crowd outside Washington's JW Marriott Hotel later that same evening. Footage of the event showed a number of men in Proud Boys attire among the crowd. As they began to leave, Jones praised them for "marching off to take this city's streets back."

He then added: "We pray for them, and we salute the Proud Boys!"

Despite the attacks, faith leaders in Washington appeared undeterred in their commitment to racial justice on Dec. 18. Just before a group of clergy erected a new Black Lives Matter banner outside Asbury, Easterling led the crowd in the loudest chant of the day.

They shouted, over and over: "Black Lives Matter!"