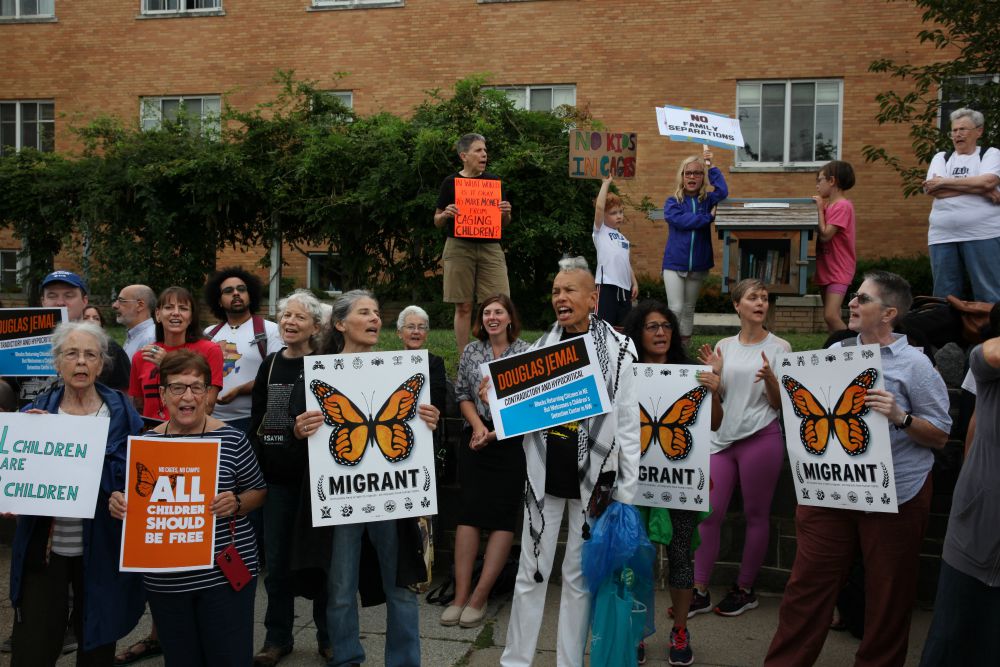 Hundreds of immigrants' rights activists rallied outside a building in the Takoma neighborhood of Washington, D.C., Aug. 28 against the creation of a new migrant child detention center on the site. They were joined by many African American activists, too, because developer Douglas Jemal had backed out of leasing his building as a re-entry center. (Rick Reinhard)

Residents from across the metro area gathered Aug. 28 in the District's Takoma Park neighborhood to oppose a proposed 200-bed child migrant shelter. Activists voiced a range of concerns, from the safety of children in this specific facility to wider problems with the Trump administration's immigration policies.

"We stand united against the hate and the madness of this presidential administration that is trying to make criminals out of 2-year-olds," Montgomery County (Maryland) Councilmember Gabe Albornoz told the crowd, estimated at 600 by organizers, that filled much of the street directly outside the proposed shelter's front entrance.

"We will not be, as a community, complicit in this madness," Albornoz said.

Speakers at the rally connected the proposed shelter to what they see as broader local, national and international injustices against immigrants and people of color. Event emcee and organizer, Ronald Moten, said the event was planned in a matter of days by a group of 20 organizations.

WAMU, Washington's public radio station, among other local news outlets reported Aug. 16 that the U.S. Department of Health and Human Services awarded Dynamic Service Solutions, a Maryland-based contractor, a $20.5 million contract to operate a shelter in Washington, D.C., for undocumented and unaccompanied immigrants ages 12 to 17. According to The Washington Post, D.C. Mayor Muriel Bowser, a Democrat, had attempted to stop the shelter by enacting emergency regulations to block any facility housing more than 15 children, but that rule expires in December.

Attempts to obtain comment from the building's owner were unsuccessful.

On Aug. 23, The Washington Post editorial board criticized local politicians for "NIMBYism masquerading as humane concern for children." (NIMBY is an acronym that means "not in my backyard.") The article argued that in blocking shelters, "local officials would become part of the problem by contributing to future logjams and inhumane conditions at the border."

Abel Nuñez, the executive director of Carecen, a Latino resource and justice center that works with immigrants primarily from Central America, expressed frustration with how the shelter and subsequent community resistance has been portrayed in the media.

"A lot of the articles have portrayed this as elected officials who are democrats trying to do a hit on Trump, but for us it wasn't that way," Nuñez told NCR in a pre-rally interview.

Nuñez said that the issues at stake are more nuanced than simply a "not in our neighborhood" situation that flat out rejects the presence of any migrant shelters in the D.C. area. His grievances, and those of his organization's partners, are tied to this specific proposal and how it relates to children's safety.

"This is a 200-person shelter, and we know for a fact that when you have that many people it elevates the probability of kids being abused. We actually have reports now from the shelters at the border where that has happened, particularly when private companies are part of this," Nuñez said. "What this is about is a private company receiving a $20-million grant to run this shelter that is not accountable to the community or to anybody else."

Nuñez said that there are other organizations, including religious ones, that work on sheltering and resettling migrants that have much higher levels of accountability, but "private companies have historically not shown that." He added that his organization is willing to talk to the Department of Health and Human Services to discuss how to restructure their contracts to make sure they are awarded to organizations with more layers of accountability to ensure the protection of children.

Immigration and Customs Enforcement (ICE) currently holds about 50,000 immigrants each day in approximately 200 facilities under contracts with private prison companies and county and local jails, according to the National Immigrant Justice Center.

Nuñez and a number of other speakers at the rally also pointed to American foreign policy's role in influencing migrant flows from Central America.

Other activists tied the proposed shelter to issues relevant to the local community surrounding the building, which is owned by the firm Douglas Development and was once the Washington Theological Union.

Organizer Ronald Moten from Don't Mute D.C. — a grassroots movement aimed at protecting the legacy of historic D.C. culture from gentrification — told NCR he found it ironic and hypocritical that the building's owner, Douglas Jemal, backed out of leasing what would be the city's only half-way house for returning citizens but is now willing to lease for, what he called, a "detention center for youth."

"Douglas Jemal is a millionaire, but guess what?" Moten said to the crowd. "He still needs you and our city and our money to develop all these properties, and we have the power to hold him accountable and stop him."

Deni Taveras, a Council Member from Prince George's County which borders the D.C. neighborhood where the proposed shelter is located, said that she represents an area that is "90% immigrant, foreign born."

Joan Conway, a parishioner at St. Camillus Church in Silver Spring, Maryland, told NCR her experiences with immigrant friends at her parish and working with migrant children in McAllen, Texas, motivated her to attend the rally despite having bad knees.

The rally lasted about an hour and included multiple musical performances, including from a Native American group and a Mexican protest-music group.

To kick off the event, primary organizer Rev. Graylan Hagler of Plymouth United Church of Christ referenced the diversity in race and age among the crowd, saying, "We didn't want to have a rally that was just angry but one that, we believe, reflects what our city needs to look like, that our whole area needs to look like."

That "reflection of Washington" included a live go-go concert, a percussion-heavy funk style of music said to have originated in the region decades ago.