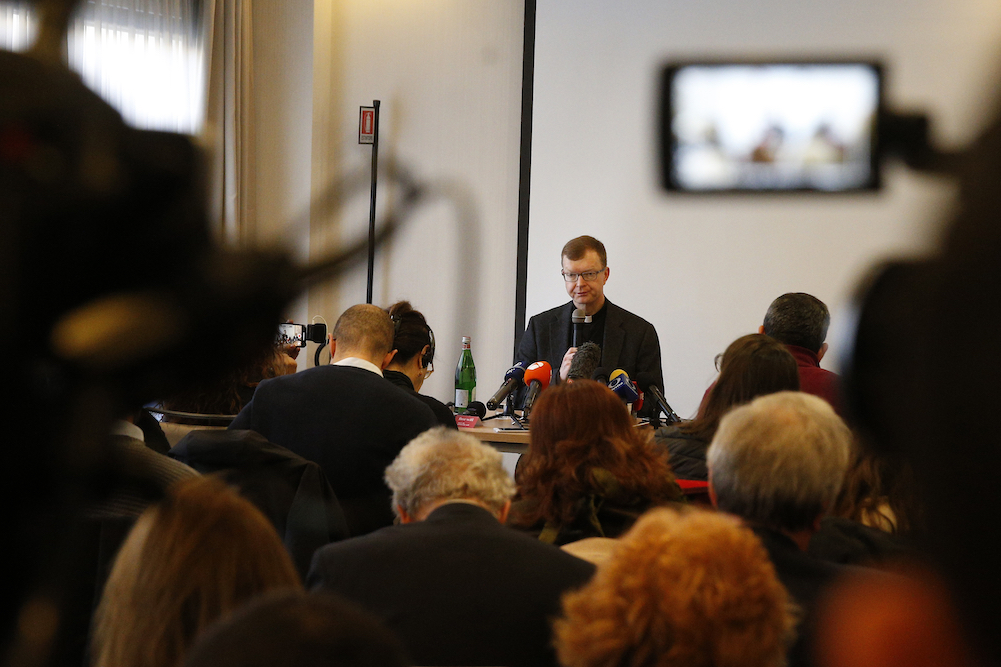 Jesuit Fr. Hans Zollner, a professor of psychology and president of the Centre for Child Protection at the Pontifical Gregorian University in Rome, leads a briefing for journalists in Rome Feb. 12. The briefing was to prepare for the Feb. 21-24 Vatican meeting on the protection of minors in the church Zollner is on the organizing committee for the meeting. (CNS/Paul Haring)

One week from tomorrow, the presidents of the world's bishops' conferences will begin a four-day meeting in Rome to discuss the church's response to clergy sex abuse. What can we reasonably expect from such a short meeting and on such a complex issue?

Most prognosticators think the meeting will fall short of expectations. I suppose that depends on what those expectations are. Take for example, my colleague Jesuit Fr. Tom Reese, who offered five reasons he thought the meeting would fail, the last of which was this:

Nonetheless, the meeting will also fail because, in order to succeed, Francis will have to lay down the law and simply tell the bishops what to do, rather than consulting with them. He'll have to present a solution to the crisis and tell them to go home and implement it.

Francis will not do that. He does not see himself as the CEO of the Catholic Church. He has a great respect for collegiality, the belief that the pope should not act like an absolute monarch. At his first synod of bishops, he encouraged the bishops to speak boldly and not be afraid to disagree with him.

I think the stark choice Reese presents misses the most likely outcome of the meeting. Yes, the pope will demand that all bishops' conferences enact policies akin to the 2002 Dallas Charter for the Protection of Minors that the U.S. bishops adopted, demanding zero tolerance for this crime and sin. But, I also anticipate the Holy Father will recognize the need for each episcopal conference to develop its own policies, mindful of the varying legal and cultural situations in each country. Those policies will likely have to receive a sign-off from Rome to make sure they are robust enough, the same way the Vatican signs off on liturgical translations and other matters.

In addition to the cultural and legal differences of each country, local churches are at different stages of confronting sex abuse by its clergy. We in the U.S. have been dealing with this for more than three decades. In some countries, the bishops may not even think they have a problem. The problem in overwhelmingly Catholic cultures is likely to manifest itself differently from the way it did in the U.S. where the culture is Calvinistic and Catholics are a minority. When the Catholic Church runs most of a country's social services, including orphanages, a pedophile can do more harm in an orphanage than in a parish, and to whom can an orphan child turn for protection or to object? I hope that, whatever happens next week, every country is able to take a giant step forward from where it is now in its commitment to confronting this sin and crime.

In writing that last sentence, at first I used the verb "eradicating" instead of "confronting." We Americans like our solutions, but the iniquity of the human heart is one of the mysteries of Creation. Pope Francis recognized this when he said on the plane back from Panama, "The expectations need to be deflated. The problems of abuse will continue. It is a human problem, everywhere." I again refer the reader to my favorite quote about humility, from Winston S. Churchill's Marlborough: His Life and Times, as he looked back at the extraordinary events of the year 1706:

The victories of Ramillies and Turin: the relief of Barcelona; the capture of Antwerp and a dozen famous fortresses in the Low Countries; the French expelled from Italy; Charles III entering Madrid; the complete suppression of France upon the seas and oceans — all these prepared a broad, an easy road along which the signatory states of the Grand Alliance, who had striven so hard against misfortune, could walk to peace and plenty. But by the mysterious law which perhaps in larger interests limits human achievement, and bars or saves the world from clear-cut solutions, this second revival of the allied cause led only to a second decline.

We may be forgiven for wanting a "clear-cut solution" to the scourge of clergy, or to any adult's sexually abusing a child, but the urge to "total" solutions is itself the source of the greatest crimes in human history.

I anticipate that there will be some discussion next week about the degree to which homosexuality is a cause of clergy sex abuse. It isn't, but some people continue to spread the myth that it is the problem. My colleague Jesse Remedios reported on a conference about the crisis held last week at The Catholic University of America. "I think the deeper issue here, beyond the narrow question of child sex abuse, is to what degree do child sex abuse, or what went on with Cardinal McCarrick, reflect a larger culture of 'don't ask, don't tell,' " said CUA theology professor Michael Root. "The laity, if that's the case, need to say that really needs to end."

Of all the examples of systemic hypocrisy to be invoked, why did Root choose one that involved homosexuality? It struck me at last year's plenary meeting of the U.S. bishops' conference that the conservative bishops were all in a lather about McCarrick, but less so about the Pennsylvania grand jury report. Yet, none of them wanted to pinpoint the very obvious source of the McCarrick problem, the fact that St. Pope John Paul II and his closest collaborators looked the other way while they promoted McCarrick through the ranks. Santo troppo subito, as one wag told me last week.

The real source of the crisis is the clerical culture which brings us to the related, but distinct, issue that will be addressed but not resolved at next week's meeting, the issue of episcopal accountability. We all use the phrase "clergy sex abuse crisis" to refer to the events of 2018, but that is not accurate. We did not find out that there were thousands or even hundreds of new cases of clergy abusing children. What we found out is that some bishops still did not feel the need to be minimally accountable by publishing the names of those credibly accused of abuse, so that other victims might be encouraged to come forward. Others could not speak about the sacramental harm their negligence had caused to the community of believers, or they tried to blame other bishops as if the U.S. bishops stand second only to the Army and Navy officer corps in maintaining a sense of corporate identity. Why was it necessary for Catholic journalists to suggest rituals of repentance? What we found out is that too many bishops were still more concerned about the reputation of the Church — or their own reputation — than anything else. 2018 exposed the degree to which the clerical culture remained focused on the wrong things. 2018 was not a sex abuse crisis but an ecclesiological crisis.

Here the issue is not what protocols the various episcopal conferences will adopt but what procedures the Roman curia will enact. Pope Francis, in his motu proprio letter "As a Loving Mother" made quite clear that he intended to hold bishops accountable for negligence in protecting children and would remove those who are so negligent from office. "The diocesan Bishop or Eparch can only be removed if he is objectively lacking in a very grave manner the diligence that his pastoral office demands of him, even without serious moral fault on his part," that document states.

I do not know why the relevant congregations in the curia have not published their procedures for investigating cases of negligence. I do not know why there has been no canonical development in this area, although it seems the pope was hoping for such legislation when he said in that same press conference on the plane back from Panama that he wanted the protocols regarding vigilance to be clear. In the most notorious case of negligence, which did not go to a congregation but came directly to the pope's desk, we know how decisive he was: He demanded the resignations of the entire hierarchy of Chile.

There is one way he can convince the relevant dicasteries to get the lead out of their efforts to develop such policies. The pope could say that until such policies and canons are adopted, he and the Council of Cardinals will examine all cases of episcopal negligence. If you know anything about bureaucracies, you know they are turf-conscious, and the thought of losing control over something so important would spur the dicasteries to devise the necessary procedures pronto.

My expectations for the summit, then, are not dismal at all, but they also are not extravagant. I hope that each bishop will go home with a clear sense of what has to be done at the local level to protect children and, what is more, convinced of the need to reexamine the clerical culture that served as the petri dish for this sin and crime. The successors of the apostles can't farm out the task of revitalizing that culture in ways that bring it closer to what Christ intended when he constituted the apostolic college. They must, as the Master said, take up their cross and follow him.