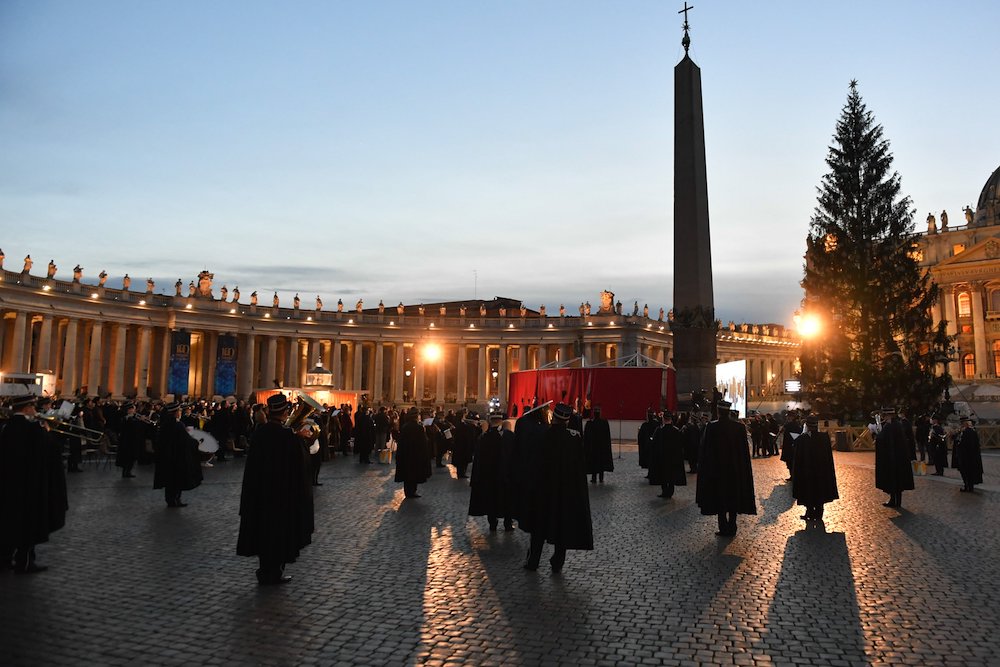 The Vatican band plays during a ceremony to unveil the Nativity scene and light the Christmas tree in St. Peter's Square at the Vatican Dec. 11. (CNS/Vatican Media)

Yesterday was Gaudete Sunday. Like its Lenten twin, Laetare Sunday, Gaudete Sunday anticipates the coming feast, breaking through the penitential season to remind us what is in store at the end of our period of fasting, prayer and almsgiving. The rose-colored vestments alert us to the light at the end of the tunnel.

Advent, however, has largely lost its penitential character. Indeed, an argument could be made that Advent has itself been lost. All the way back in 2013, I argued that while Fox News was complaining about a non-existent "war on Christmas," there really was a war on Advent. Who remembers that Christmas starts on Dec. 25 anymore?

The commercial possibilities of Christmas are the obvious culprit in the disappearance of Advent. But, more generally, Advent is about expectancy, and our societal commitment to instant gratification has produced a spiritual psychology that has a hard time appreciating the longing we hear in the voice of an Isaiah or a Baruch. They were not expecting a new blender or a nice sweater. (I really do need a new blender, hint, hint.) They were expecting deliverance from their suffering and their exile. They were expecting a savior. They wanted their burdens lifted, and they knew that their salvation could only come from outside, that their only hope of reclaiming their identity would be found not in the imaginings and workings of their own minds, but from the God of Abraham, Isaac and Jacob. He could lift their burden, end their exile and save his people.

I am profoundly cognizant of the sufferings of many people in our own time: Black Americans and other minorities who experience racism in persistent and varied ways, the struggles of the working poor of all races, the abject circumstances of the desperately poor, the daily challenges faced by those who wrestle with addiction.

Yet, as a culture, post-World War II America is the land of plenty. Ours is the society of the "self-absorbed promethean neo-pelagianism" that Pope Francis warned against in Evangelii Gaudium. We are a people unburdened by want, too often unburdened by conscience. If we want something, we buy it. If we tire of something, we toss it. The world is our oyster here in America, the "greatest nation in history" and "last, best hope for humankind." We like to be our own saviors. If there is a burden to be lifted, we will figure out how to do so.

This year has been different. This year we, as a people, have been afflicted by COVID-19. We have encountered a burden that we could not lift on our own. We look to a vaccine to save us from it. Expecting a medical cure is not the same as expecting a savior, but it is closer than anything our nation has experienced in my lifetime. Yes, we wanted an end to the Vietnam War, but the burdens of that war did not fall on us all. Yes, we wanted an end to the various economic recessions through which we passed, but millions of Americans weathered those recessions without so much as a change in lifestyle. The burdens of COVID-19 have been uneven, to be sure, with the poor and marginalized suffering in ways the affluent have not, but COVID-19 has been a burden to everyone in some way. It has affected us not simply in large or systemic ways, but in quotidian ways, too. This year, like the ancient Israelites, we know something of the solidarity of suffering.

Will it matter? The prophets, remember, called the people of Israel to return to their truest selves, to be obedient to the Lord. They urged them to conversion. The Holy Father, in his encyclical Fratelli Tutti also called us to conversion:

As I was writing this letter, the Covid-19 pandemic unexpectedly erupted, exposing our false securities. Aside from the different ways that various countries responded to the crisis, their inability to work together became quite evident. For all our hyper-connectivity, we witnessed a fragmentation that made it more difficult to resolve problems that affect us all. Anyone who thinks that the only lesson to be learned was the need to improve what we were already doing, or to refine existing systems and regulations, is denying reality.

This Advent, the virus reminds us what it feels like to be expectant, to feel the need to have a burden lifted. Apart from those few doctors and researchers who have worked so hard to develop a vaccine, the rest of us will experience this lifting as something brought to us, as something of a gift, a gift from outside.

For Catholic Christians, the gift of Christmas, the Christ child, is yet more wonderful, curing not only a virus, but the original plagues of humankind, sin and death. He is pure grace, and nothing we can do can merit the salvation he brings. In Advent, then, our job is to follow in the footsteps of one the great saints of Advent, St. John the Baptist, and let ourselves become less so that the Lord Jesus can become more, to make our hearts ready for so great a savior, to prepare the way, making the rough places plain and the crooked way straight.

This is never easy, not for us protean Americans, but there is one surefire method: Go to confession. That always makes us realize how badly we need a savior. Of all the outrageous things Donald Trump has said about religion, the most outrageous was when he was asked if he had ever sought forgiveness from God, and he replied: "I am not sure I have. I just go on and try to do a better job from there. I don't think so. I think if I do something wrong, I think, I just try and make it right. I don't bring God into that picture. I don't."

This Advent, don't be like Trump. Be like Francis. If we recognize how badly we need a savior, we will recognize that we really have something to celebrate this Christmas — and every Christmas. Then, and only then, we can make our own the words we heard at Mass yesterday:

The spirit of the Lord GOD is upon me,
because the LORD has anointed me;
he has sent me to bring glad tidings to the poor,
to heal the brokenhearted,
to proclaim liberty to the captives
and release to the prisoners,
to announce a year of favor from the LORD
and a day of vindication by our God.