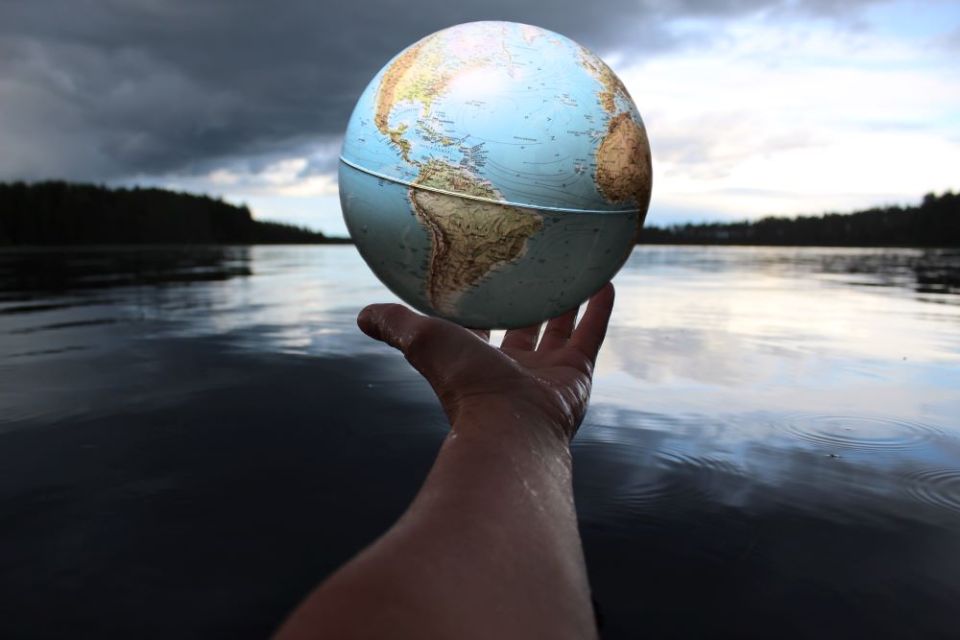 As nations work this year to reach agreements on safeguarding the world's oceans and biodiversity, Catholic groups in Africa and Oceania have raised their voices on behalf of their regional biomes, pressing for strong actions to conserve creation in light of accelerating threats.

Separate gatherings in June brought together Catholic organizations and leaders in an effort to shine a light on the dangers facing oceans and biodiversity around the globe and to outline church positions in defense of both.

The latest event came during the United Nations Ocean Conference, held June 27–July 1 in Lisbon, Portugal. The summit was the second hosted by the U.N. focused on protecting the world's oceans, which together cover 70% of the Earth's surface, house 80% of all species on Earth, generate half of all oxygen and serve as a vital carbon sink of heat-trapping emissions causing climate change. More than 3.5 billion people rely on the oceans for food, with another 120 million people, mostly in small islands and developing countries, depending on the seas for work.

Despite playing such vital roles, the oceans are often an afterthought in international environmental talks, said Antonio Gueterres, U.N. secretary-general.

"Sadly, we have taken the ocean for granted, and today we face what I would call an 'ocean emergency,' " he said in a speech opening the conference June 27. "We must turn the tide. A healthy and productive ocean is vital to our shared future."

A day later, Catholic groups held a panel discussion in Lisbon on the importance of oceans. Modeled as a Talanoa dialogue — a Pacific approach to deep, inclusive communication — participants, many from islands like Fiji, Tonga and the Philippines, shared personal stories of their relationship to the ocean. Several speakers became emotional as they spoke about the critical roles the seas have played for their families and local communities, whether as sources of food and work or as vital in transportation, relaxation or their culture.

Teresa Ardler, director of an aboriginal cultural center in Australia, described how her Gweagal community dip their newborns into the ocean shortly after bringing them home from the hospital, "just like baptism," as a way to connect with their totem, the humpback whale, and as a reminder that they came from the ocean and one day will return to it.

"It's actually quite beautiful to still have that strong connection with the ocean. And I'm very proud, it's very much in my heart," Ardler said.

Panelists also spoke to the present threats facing the seas and communities that live near them.

Roughly 11 million tons of plastic enter the ocean each year. UNESCO estimates 30-35% of critical marine habitats, like seagrass, mangroves and coral reefs, have been destroyed, and the combination of pollution and climate change has put half of marine species at risk of extinction by the end of the century. 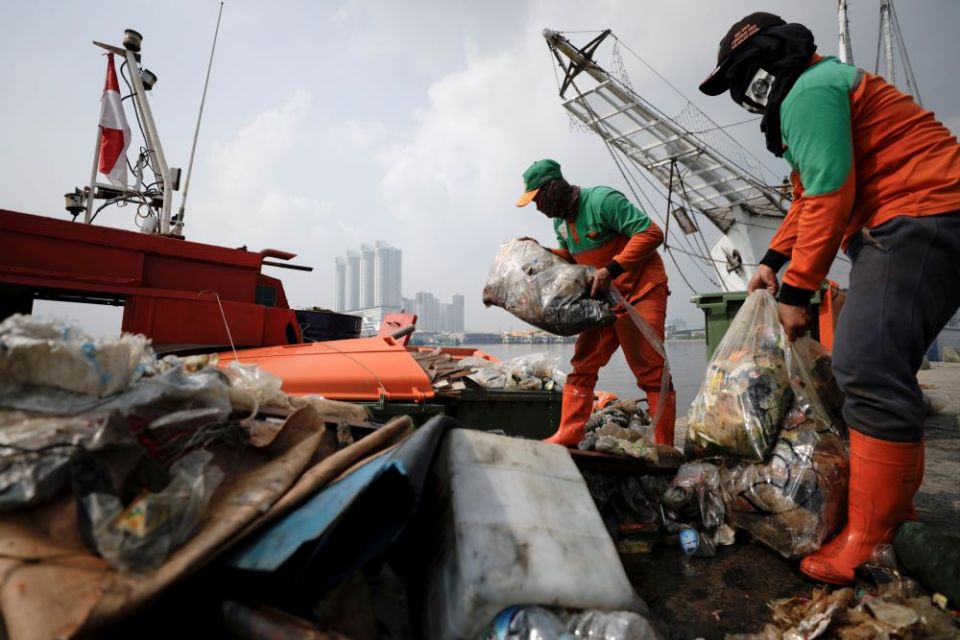 Municipal workers unload bags of garbage collected from the shore during World Oceans Day at Kali Adem Port in Jakarta, Indonesia, June 8, 2021. As designated by the United Nations, World Oceans Day is celebrated to inform the public of the impact of human actions on the ocean and to develop a worldwide movement of citizens to protect them. (CNS/Reuters/Willy Kurniawan)

The oceans have been rapidly warming, and ocean acidity has increased 26% since pre-industrial times. Rising temperatures have led to rising seas, placing the more than 680 million people living in low-lying coastal areas at risk of flooding or even losing their homes altogether.

The potential of relocating communities — a reality already in some places — makes loss and damage payments to island nations especially critical, said Jesuit Fr. Pedro Walpole of the Philippines, coordinator of the River Above Asia and Oceania Ecclesial Network.

Archbishop Peter Chong, head of the Suva, Fiji, Archdiocese and president of the Federation of Catholic Bishops Conferences of Oceania, said much attention has rightly focused on preventing deep-sea mining but also urged people not to lose sight of other mining already destroying environments.

Chong also called for greater space for discussions of spirituality in deliberations about protecting oceans and the planet.

"The ecological crisis is because there's an inner crisis. So there has to be a language that reaches the heart, and that's the limitation of the scientific and academic language," he said.

Panelists also called for Indigenous people and youth, especially from Oceania, to have a larger voice in the international deliberations, as those with deep knowledge about ways to live in harmony with oceans and as the generations who will inherit today's world and waters.

"The youth are picking up this problem already. They should be able to practice their skills and their integrity, because at this stage they have integrity. They haven't been bought off," Walpole said.

The U.N. Ocean conference concluded with leaders of 20-plus nations agreeing to a joint declaration that called for a global response to reverse ocean degradation. Work also took place on treaties on the conservation of marine biological areas beyond national jurisdiction and addressing plastic pollution in the oceans.

Improving the health of oceans is one piece of a wider global pursuit to safeguard the planet's biodiversity. More than 70 nations, including the U.S. and European Union, have signed onto the "30x30" campaign to conserve at least 30% of the world's lands and seas by 2030. That target will garner additional attention later this year at the 15th U.N. Convention on Biological Diversity, COP15.

Originally scheduled for 2020 in Kunming, China, but delayed by the coronavirus pandemic, COP15 is now set to be held in Montreal, Canada, Dec. 5–17. Along with the 30x30 campaign, the conference is expected to negotiate a post-2020 Global Biodiversity Framework to reverse biodiversity loss and outline a roadmap for humanity to live in harmony with nature by 2050.

'The ecological crisis is because there's an inner crisis. So there has to be a language that reaches the heart, and that's the limitation of the scientific and academic language.'
— Archbishop Peter Chong

A preparatory meeting, held mid-June in Nairobi, Kenya, yielded little progress, prompting NGOs to warn that a deal is "in peril."

During that pre-COP15 negotiating session, Catholic organizations from Africa's Congo Basin also gathered in Nairobi to devise and deliver a Catholic position on protecting biodiversity.

A statement issued by the Symposium of Episcopal Conferences of Africa and Madagascar, or SECAM, said that the Earth is suffering due to "irresponsible use and abuse" by humans, with nature declining at increasing rates. In the Congo Basin, the world's second-largest tropical rainforest and a critical "lung" of the Earth, land grabs, industrial agriculture, illegal logging and conflict over natural resources have destroyed wildlife habitats, damaged local communities and fueled climate change.

"The science is clear: an extractive, unsustainable economy is causing the climate emergency and biodiversity crisis, which is destroying God's creation and harming the most vulnerable among us, those who have done little to cause the crisis, the poor and the Earth," the statement said.

SECAM, joined by the Ecclesial Network on the Congo Basin Forest, or REBAC, and the Laudato Si' Movement, called on governments to commit to at least protecting half of all lands and oceans by 2030. They also pressed nations in the Global North to deliver long-promised financing, urged the protection of Indigenous peoples' rights, and demanded an immediate stop to construction of the East Africa Crude Oil Pipeline.

"We strongly urge all our brothers and sisters to understand that we humans are uniquely created in God's image and likeness and are called to exercise responsible stewardship over creation on behalf of our loving Creator," the statement read.

A copy of the statement was given to Iyad Abumoghli, director of the U.N. Environment Programme's Faith for Earth initiative, who attended a panel discussion where it was presented.

During the discussion, Catholics described the importance of safeguarding areas like East Africa's Lake Victoria; Lake Albert on the border of Uganda and the Democratic Republic of Congo; and Murchison Falls, Uganda's largest national park, for their roles in sustaining human and nonhuman life and as valued parts of God's creation.

Jesuit Fr. Rigobert Minani, head of REBAC, described Earth as the only source of biodiversity in the known galaxy, and thus a gift from God.

"This degradation of biodiversity is a major challenge for environments of our time," he said. "We have then historic responsibility to stop the decline and to reverse the trend."

Related: Faith leaders reassert critical role in confronting climate change ahead of Stockholm+50
A version of this story appeared in the July 22-Aug 4, 2022 print issue under the headline: Pushing to save global biodiversity .