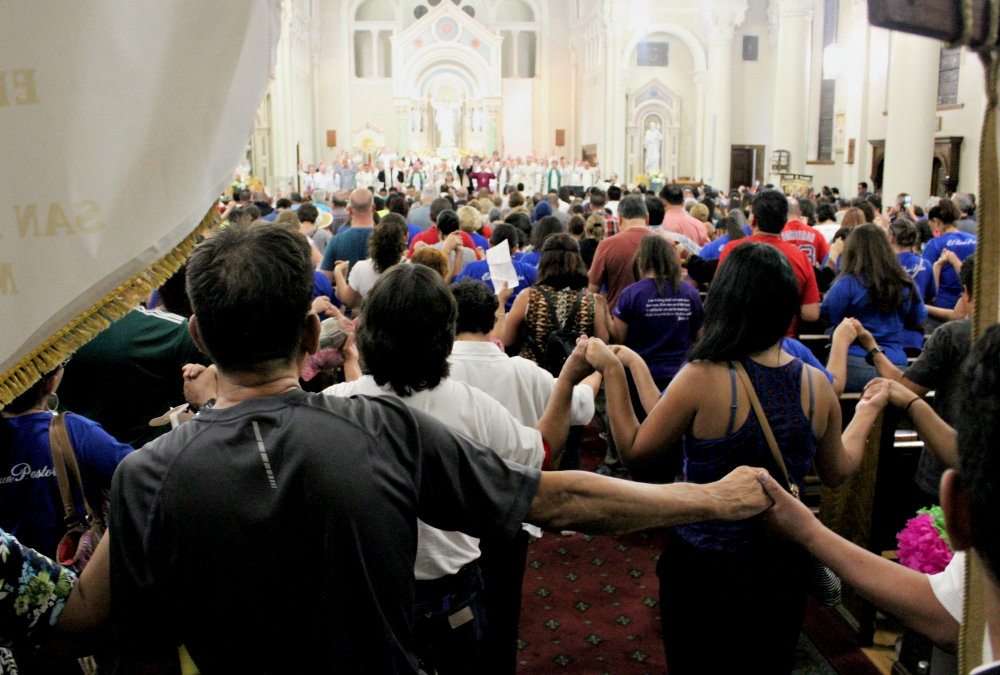 Interfaith leaders alongside Catholic bishops led a July 20 procession 900-strong through downtown El Paso, ending in a candlelight vigil for the plight of migrants and refugees.

The interfaith service, held at St. Patrick Cathedral, kicked off a "Weekend of Solidarity with Migrants." Blessed Sacrament Fr. Robert Stark, of the Vatican's Migrants and Refugees Section, offered the keynote address at a July 21 "teach-in," which was titled "A Place at the Table: Faith, Migration and the Future of Our Border Communities."

Catholics, joined by other Christian denominations and religions, created an overflow crowd at the cathedral, with many sitting in the aisles as they listened to testimonies from immigrants and heard prayers from religious leaders in the Episcopal, Presbyterian, Lutheran, Muslim and Baha'i faith traditions.

In a powerful sermon, Stark reiterated Pope Francis' support of migrants and refugees.

"What is going on today is the illegalization of legal migration," Stark told the crowd. "It is immoral to criminalize people seeking asylum, to separate families. Asylum is a basic instrument of protecting life."

Using Francis' words, he invited the congregation to use a "contemplative gaze" to see all migrants as a gift.

"Here at the border, you know that every stranger who knocks on the door is an opportunity to have an encounter with Christ," he said. "We miss that opportunity when we don't accompany the migrant and refugee. It's our loss."

The Rev. Deborah Clugy-Soto, chair of the Interfaith Alliance-El Paso and Southern New Mexico, offered the final benediction. She said she was pleased with the message and the "very impressive turnout." 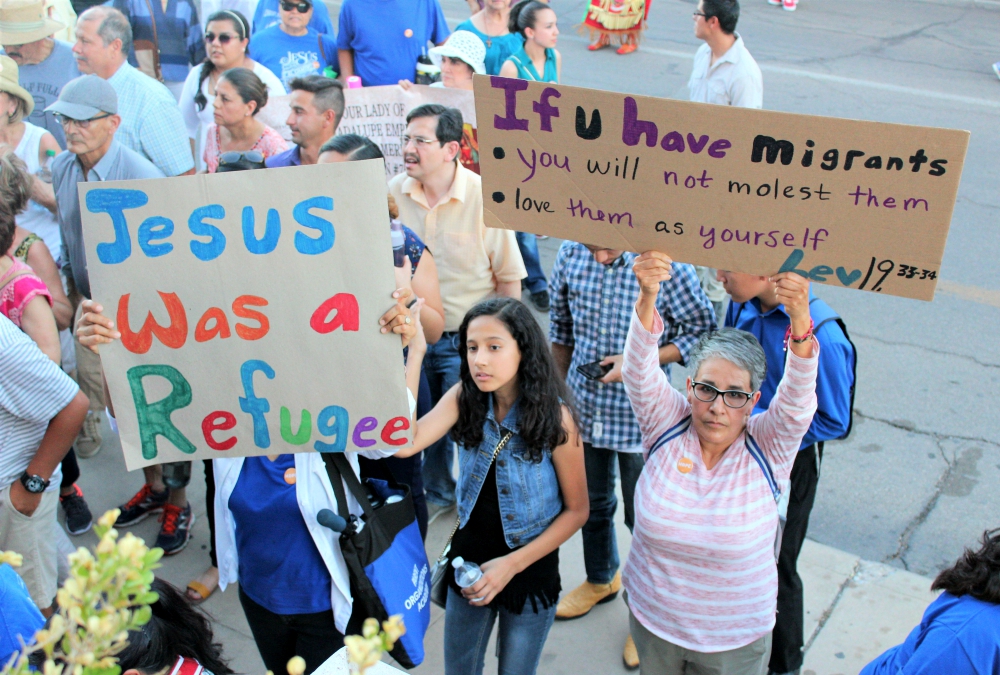 Although the majority of El Paso residents are Catholics, Clugy-Soto noted that "all faith traditions are concerned about what's happening here on our border. We are seeing a lot more collaboration on migration and other issues."

Organized by the El Paso Diocese's Commission on Migration and the Catholic-based grassroots organization Hope Border Institute, the idea originated with Bishop Mark Seitz, long an outspoken supporter of accompanying migrants and refugees.

"We wanted to have this vigil because it struck us that, as Catholics, we don't have to do this alone," Seitz said. "Every major religion has a deep appreciation for the poor, the powerless, those who are showing up at our door. It's a fundamental message, not only of Catholicism and Christianity, but of all religious groups, so it's special that in the midst of this difficult issue we're finding that we're united despite the many things that still separate us in terms of our beliefs."

Seitz noted El Paso's proximity to Juárez, Mexico, its bustling three ports of entry, and interconnected economies. "Very few families here in El Paso don't have relatives on the other side of the border," he said. "Our sense of what a border community is is so different, even from other border communities." 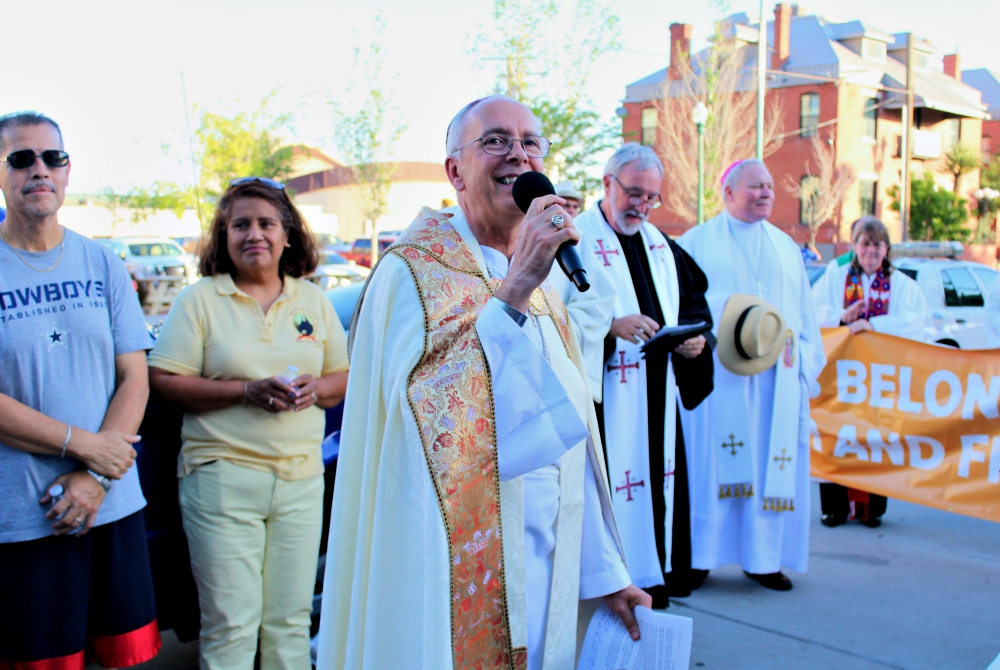 In a community where many either are first-generation immigrants or have family members who are, "this question of how we treat migrants and refugees is not abstract," Seitz added. "It's something that touches upon our daily living. I believe it touches upon what kind of Christian we're going to be, how much you are like Christ and recognize Christ in the vulnerable and the weak."

Seitz, who recently marked his fifth anniversary as bishop of El Paso, wanted this event to happen on the one-year anniversary of his pastoral letter on migration, "Sorrow and Mourning Flee Away." The event also coincided with the Trump administration's "zero tolerance" family separation policy and opening of the nearby Tornillo tent city.

"On the borders, there's a particular living out of the Gospel that is important for us to understand more deeply," Stark said. "We believe an encounter with migrants and refugees provides an opportunity for an encounter with God, and we want to find out more about that encounter and share that around the world, so we try to go to those places where that's happening."

Related: Dispatch from a parish on the El Paso-Juárez border

El Paso is one of those places.

Bringing a video message from Francis, Stark offered the Vatican's gratitude, support and affirmation of El Paso residents living out the Gospel. He also focused on Francis' message of encountering God through one's vulnerability. 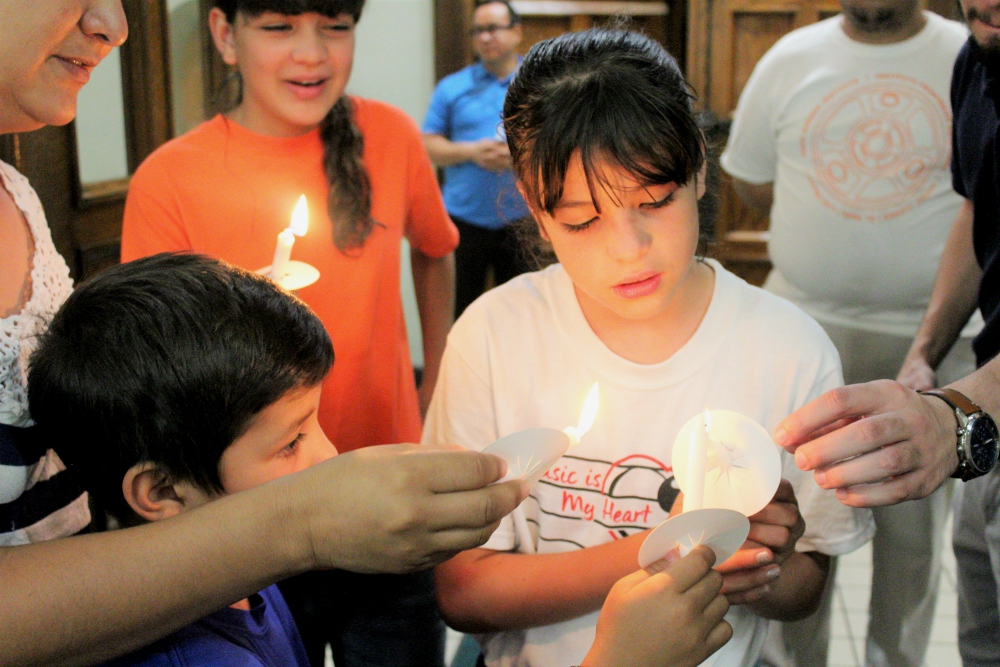 Many of the July 21 teach-in attendees already accompany migrants in some capacity. Some volunteer at temporary shelters, visit the detained or are involved in a parish ministry. Yet they need support in doing what is viewed as "countercultural."

"Many of the people here are getting pushback from those who live in fear of the migrant and who see every move to care for the migrant as a threat to them, so we have to counter that narrative and say this fear is more like a phobia, an irrational fear," Seitz said. "We have to help the people in our churches respond and reflect on what it is that our faith teaches us."

The 230 mostly Catholic attendees expressed a desire to better live out their faith.

"I believe it is a moral responsibility for our country to address migration and it has to start with me as a Christian," said attendee Elba Stell.

Maureen de la Rosa wanted to know more about what her diocese is doing and be able to speak more intelligently about this issue in the workplace.

"I believe we do have a right to limit the number of people who come to our country, but we can do it more humanely. Attending this teach-in made me look at this more thoughtfully," she said, adding, "After learning today more about the reasons people are leaving, I would almost like to retract that statement, because I believe everybody should be able to live in a safe environment. If my community of El Paso was bombed, I'd certainly want to find a safe shelter for my family, and I have a right to do that."

Stark called the El Paso community "an amazing, inspiring example of church trying to live out the call of the Gospel and the call of Pope Francis to be church."

"People here are struggling to make sense of this call to be a church — not a country, but a church — without borders, and a church that literally welcomes, protects, promotes and integrates the migrant as a gift," he said. "And in doing so, they have a message for us. What's happening here in El Paso is an important experience for the United States and the rest of the Americas, and the world, about what it means to be Christian" in the face of massive migration.

As for what the weekend accomplished, Seitz said, "I hope more than anything that it reanimates the people of our diocese, and many others, who are stepping out to serve the migrant, so they will understand it's not about politics, it's about how we live out our faith." 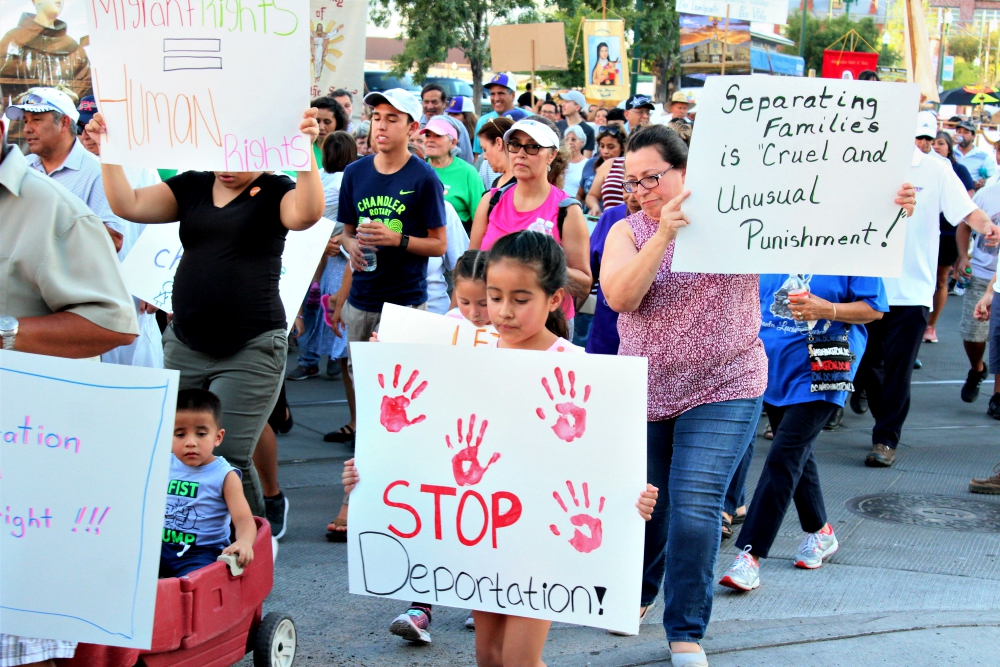 [Pauline Hovey is a writer living in El Paso where she accompanies migrants and refugees at a hospitality center.]