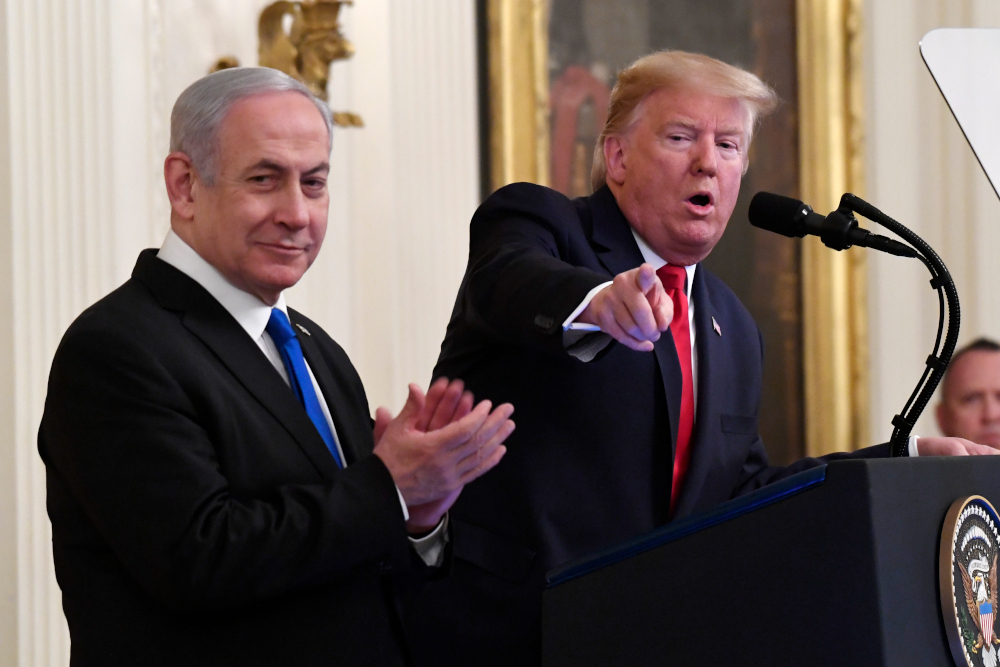 To many evangelicals and ardent Christian Zionists, God promised the land of Israel to the Jews and to the Jews alone.

The belief comes, at least in part, from the Book of Genesis which recounts of the covenant God made with Abraham:

“The whole land of Canaan, where you now reside as a foreigner, I will give as an everlasting possession to you and your descendants after you" (Genesis 17:8).

Yet on Jan. 28, when President Donald Trump unveiled his long-awaited plan for peace between Israel and the Palestinians, which calls for some land swaps with Palestinians and a Palestinian capital in East Jerusalem, his evangelical advisers congratulated him for it.

Robert Jeffress, pastor of First Baptist Church in Dallas who attended the unveiling in Washington, called the proposal " courageous and compassionate."

The Rev. Johnnie Moore, another evangelical adviser, said it was "nuanced, realistic and comprehensive."

Pastor John Hagee, chairman of Christians United for Israel, said it was “the best peace proposal any American administration has ever put forth.”

For years, Hagee has defended Israel’s right to make decisions free of international interference or pressure.

But Trump’s plan, developed with adviser and son-in-law Jared Kushner and announced alongside Israeli Prime Minister Benjamin Netanyahu, is as close to the biblical ideal as Israel is likely to get, evangelicals said.

The plan would allow Israel to keep all the settlements it has already built in Palestinian territory annexed in the 1967 Six-Day War. Even more, it allows for the application of Israeli law in parts of the West Bank that have never been subject to it. In exchange, it gives Palestinians parts of the West Bank and some land in Israel's Negev Desert along the Egyptian border. The plan, which falls short of giving Palestinians full statehood,  also proposes a Palestinian capital in East Jerusalem.

Joel C. Rosenberg, an evangelical with dual U.S.-Israeli citizenship who has a large following among U.S. evangelicals — mostly for his bestselling fiction about Bible prophecy, but also for his views on Israel — said evangelicals are not about to turn on Trump.

“Evangelicals in the United States trust President Trump on the issue of Israel because he’s been so supportive,” Rosenberg told Religion News Service from his home in Israel. "They’re not dealing with a hostile president, like President Obama. They’re dealing with a friend who has been enormously helpful to Israel.”

Many American Jewish leaders were critical of the plan.

Rabbi Rick Jacobs, president of the Union for Reform Judaism, said he was troubled by Netanyahu’s statement at the White House saying that he will establish Israeli law over all of those West Bank settlements and the Jordan Valley, calling that approach “dangerous for Israel’s future.”

J Street, the liberal pro-Israel advocacy group, was even more blunt, calling it the “president’s ‘peace sham.'” Jeremy Ben-Ami, president of J Street, said it was “the logical culmination of repeated bad-faith steps this administration has taken to validate the agenda of the Israeli right, prevent the achievement of a viable, negotiated two-state solution.”

(The much larger American Israel Public Affairs Committee said it appreciated the effort and urged the “Palestinians to rejoin Israelis at the negotiating table.”)

Evangelical leaders who were briefed on the proposal during the three years it took to draft it said the plan was close to biblical, mindful that even Abraham divided his property with Lot, his nephew, after a quarrel.

“From our perspective what he’s done is recognize the Bible as legal,” said Mike Evans, a Christian Zionist who heads the Jerusalem Prayer Team, referring to Trump’s plan to apply Israeli law to parts of the West Bank.

Evans, who attended the unveiling ceremony, said he had talked beforehand to Kushner as well as Jason Greenblatt, Trump’s Israel adviser; David Friedman, the U.S. ambassador to Israel; and Avi Berkowitz, another Trump adviser.

Evans pointed out that the peace plan does not really call for a two-state solution, since it does not allow Palestinians an army or air force and gives Israel overriding security responsibility. As for the plan’s call for a Palestinian capital in East Jerusalem, Evans said it was a small neighborhood called Abu Dis, which is already inhabited and controlled by Palestinians.

“We’re all sophisticated enough to realize that reality is going to be the prominent factor that controls everything,” Evans said. “The Palestinians won’t accept this generous offer but the Muslim world will appreciate it.”

No Palestinians attended the White House preview and none were consulted on it. Ambassadors from the United Arab Emirates, Bahrain and Oman attended the ceremony.

Evans said evangelicals care about Palestinians and hope they will eventually come to embrace the deal.

“As Christians we care about these people,” he said. “We want them to have hope and dignity but not at the expense of Jewish lives.”