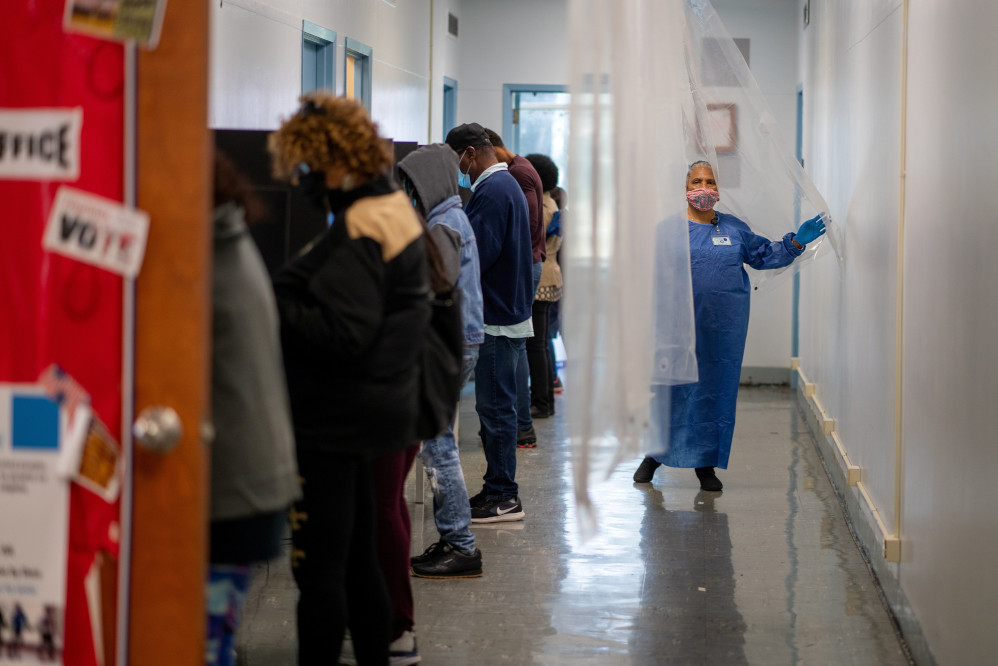 A poll worker in New Orleans walks past people casting their early votes Oct. 16, 2020, for the upcoming presidential election. Released the afternoon of Oct. 19, the results of a poll conducted by EWTN News and RealClear Opinion Research showed that 52% of "likely Catholic voters" support former Vice President Joe Biden, a Catholic, while 40% support Trump. (CNS/Reuters/Kathleen Flynn)

Less than two weeks before the presidential election, a new poll indicated President Donald Trump has lost the so-called "Catholic vote" and that his nomination of a Catholic to the Supreme Court, Judge Amy Coney Barrett, did nothing to change that equation.

Released the afternoon of Oct. 19, the results of a poll conducted by EWTN News and RealClear Opinion Research showed that 52% of "likely Catholic voters" support former Vice President Joe Biden, a Catholic, while 40% support Trump.

In the EWTN/RealClear poll, Barrett's nomination was popular with Catholics overall, with 46% supporting it and 28% opposing it. Her strongest approval percentage, 54%, came from those who identified as weekly Massgoers.

In 2016, a Pew poll taken after the election indicated that Trump, running against Hillary Clinton, received 52% of the Catholic vote, while Clinton got 45%. In 2004, Massachusetts Sen. John Kerry, the last Catholic presidential candidate before Biden, also lost the identified Catholic vote to George W. Bush.

If Trump's reversal is "true on Election Day, there's no way the president can win," said Carl Cannon, Washington bureau chief of RealClearPolitics, at a news conference.

Trump's position among Catholic voters has been steadily falling. The Pew poll taken in July and August gave him a huge lead, 59%-40%, among white Catholics. But the last one from Pew showed that Trump's advantage there had dropped to just eight points, 51%-43%. Among Hispanic Catholics, Biden's numbers more than double Trump's at 67%-26%.

The gap between Biden and Trump narrows, cautioned the EWTN/RealClear poll report, "to within the margin of error" in the swing states of Arizona, Florida, Michigan, North Carolina, Pennsylvania and Wisconsin.

The gap, they added, "also tends to narrow or flip to support for President Trump among Catholics who go to Mass more often, while support for Biden increases among those who attend church less frequently." 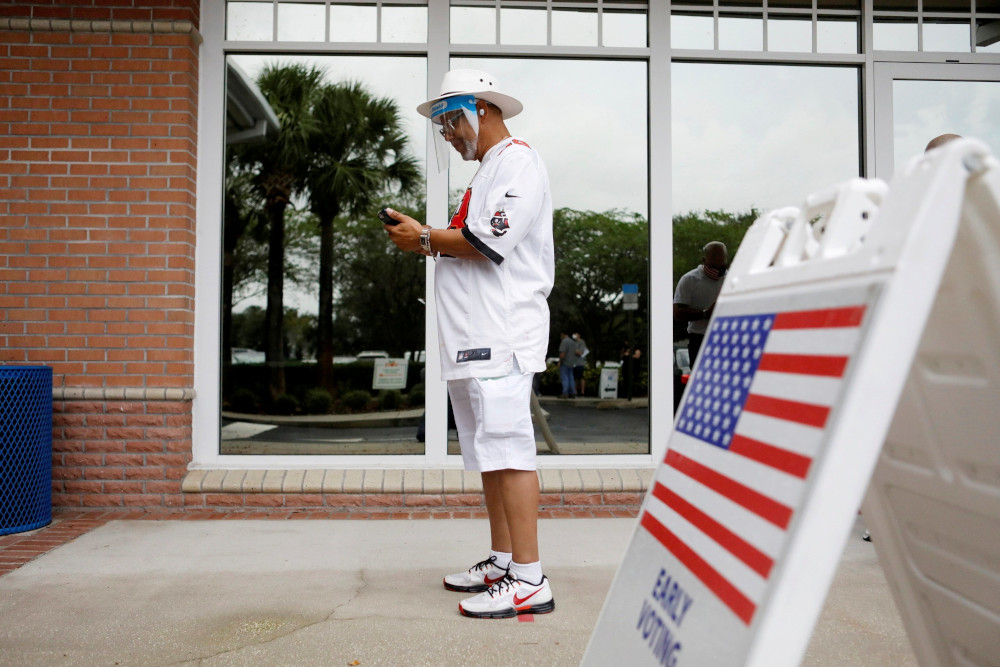 A person in Orlando, Fla., waits in line to cast a ballot Oct. 19, 2020, as early voting begins ahead of the November election. Trump's position among Catholic voters has been steadily falling, according to Pew polls. (CNS/Reuters/Octavio Jones)

Sixty-four percent of likely Catholic voters said a nominee's religion should not be considered when confirming a nominee to the Supreme Court, while 23% said it should be a consideration.

Forty-three percent of likely Catholic voters say practicing Catholic politicians should follow the teachings of the Catholic Church and oppose abortion, while 29% disagree.

Biden has said he'd like to see the Supreme Court's 1973 Roe v. Wade decision, which legalized abortion on demand, codified into law. He also says that as a Catholic, he is personally opposed but doesn't want to impose his view on the electorate.

Trump would like to see Roe overturned and the Hyde Amendment codified; each year it is a rider on an appropriations bill and bars the use of federal funds to pay for abortion except to save the life of the woman or in case of rape or incest. Until 2019, Biden supported Hyde, but now says the amendment would obstruct his health care proposal from covering low-income women.

The EWTN/RealClear Opinion Research poll of 1,490 likely Catholic voters was conducted online in English and Spanish from Oct. 5 to Oct. 11. The poll has a margin of error of plus or minus 2.79 percentage points.

It was the fourth in a series of four polls by the two outlets looking at American Catholics' voting habits and practices.

USA Today in reporting midday Oct. 20 on just-released results from other polls show it is "an overwhelmingly tight race" between Biden and Trump in a number of key battleground states, including Iowa, Georgia, Ohio and North Carolina.