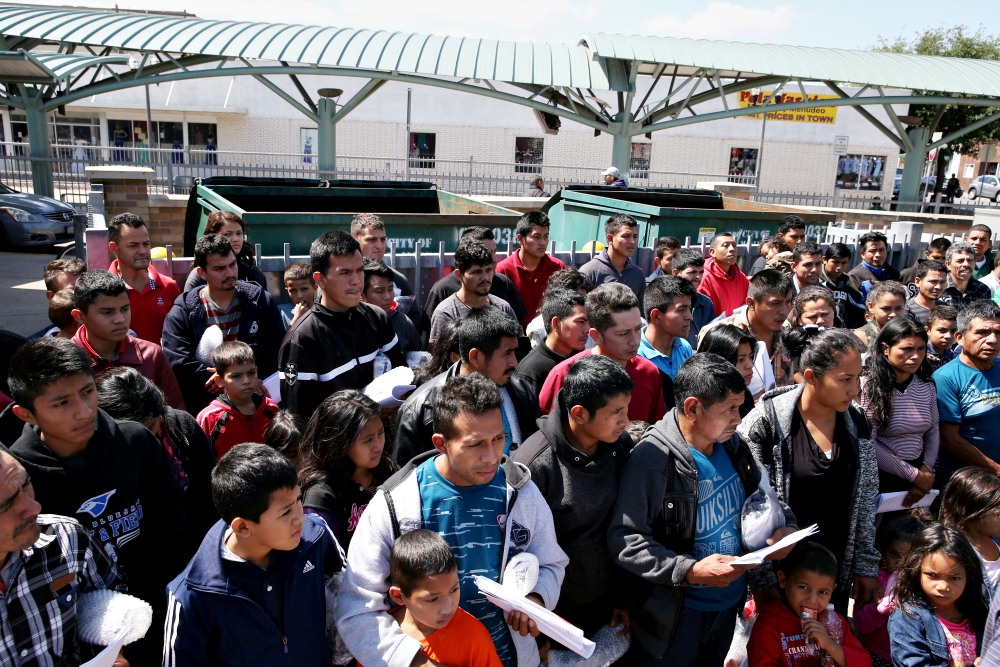 Immigrants just released from detention via a U.S. immigration policy known as "catch and release" stand at a bus station April 11 before being taken to the Catholic Charities relief center in McAllen, Texas. "Catch and release" allows immigrants in detention for entering the U.S. without legal permission to be released while they wait for their cases to be processed. (CNS/Reuters/Loren Elliott)

Three years ago, Donald Trump traversed down the gilded escalator of his New York skyscraper and identified Mexican immigrants as murderers and rapists, with an allowance that some, perhaps, might be "good people."

Trump's central campaign pledge was to build a wall on the southern border paid for by the Mexican government. While the wall has not been built, the heat on immigrants has not let up. Trump and Attorney General Jeff Sessions have publicly been at odds over other matters, but they agree that immigration, both legal and illegal, should be curtailed.

In the middle of this immigration crisis stand more than 400 American Catholic bishops. The bishops of the U.S. have long defended immigrant rights, seeking a long-term immigration reform, supporting the Deferred Action for Childhood Arrivals program (DACA) and an end to massive deportations.

In a little more than a year, the Trump administration has put its mark on immigration policy. Arrests of those charged with violating immigration laws have gone up 40 percent. The definition of who should be eligible for deportation has expanded to anyone in the country illegally, not just those who have committed felonies. Trump has suggested that legal immigration be restricted to those with needed job skills, with family reunification taken away as a reason for citizenship.

President Barack Obama's DACA program, which provided legal residence for young adults brought here illegally by their parents, was quashed by Trump with an unfulfilled promise to have Congress decide its merits. The administration threatens to break up families of immigrants who have crossed the border illegally, placing children in foster care until cases are decided.

And the U.S. Citizenship and Immigration Services changed its mission statement this year to delete references to the United States as a nation of immigrants.

Beyond the rhetoric, fear permeates immigrant communities. A regular part of church life with large Latino congregations is the designating of foster parents for American citizen children born to immigrant parents threatened with deportation. 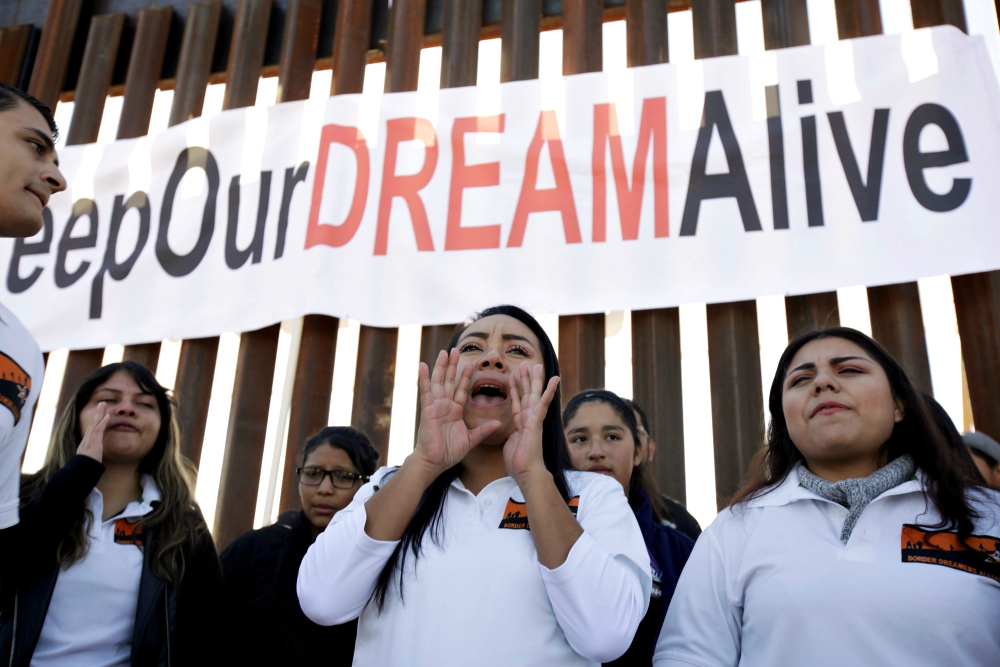 Beneficiaries of the federal Deferred Action for Childhood Arrivals program attend the "Keep Our Dream Alive" binational meeting in 2017. The Dreamers, as DACA recipients are known, gathered at a section of the U.S.-Mexico border wall in Sunland Park, New Mexico. (CNS/Reuters/Jose Luis Gonzalez)

One of the few places immigrants can gather peacefully and without danger are churches. Many of those churches are Catholic.

Still, in some ways, the U.S. bishops are stuck in the middle. Many, if not most, of their white parishioners voted for Trump and his anti-immigrant platform, while Pope Francis has stood for the opposite when it comes to immigration issues. The pope even questioned the president's Christian bona fides over Trump's insistence on a border wall.

While they stand together, bishops retain their individuality. They differ on strategies, approaches and how much of a priority they put on the issue of immigration.

One group could be called the activist bishops. They go beyond signing statements with their fellow bishops and stand up for immigrants in their communities threatened with deportation.

Among them is Cardinal Joseph Tobin of Newark, New Jersey, a prominent Francis appointment, who within months of his installation in 2017 joined street demonstrations for Mexican immigrant Catalino Guerrero, who has been threatened with deportation.

Besides direct action, Tobin has perhaps been the most vocal of the bishops in attacking the Trump administration.

"You really have to believe in inflicting cruelty on innocent people to choose to support the policies we've seen in recent months," Tobin said during a May 2017 address to journalists in Brooklyn, New York. During a radio podcast in September 2017, Tobin described Trump's actions on DACA as "bullying" the most vulnerable.

Cardinal Joseph Tobin leads a "Jericho Walk" in solidarity with immigrants at the Federal Building in Newark, New Jersey, May 3. (YouTube/Currents News)

With Tobin, and most other bishops, Atlanta Archbishop Wilton Gregory has supported DACA, arguing, "Our Dreamers are blessings for our country."

He has also offered public support for Felix Garcia, whose daughter, a DACA recipient, is now attending medical school. Garcia was arrested by ICE agents in Georgia while at his carpeting factory job.

Bishops with direct experience of the immigration crisis are those whose dioceses lie on the southern border.

As a group, these bishops, both with traditional and more liberal reputations, are animated on the issue. They live in places with long histories of border travel and cooperation. Now the region is the focal point of immigration enforcement, including routine roadblocks within 100 miles of the border. Bishops there have joined in occasional liturgies with their Mexican counterparts across border fences to dramatize the Catholic commitment to immigrant rights. 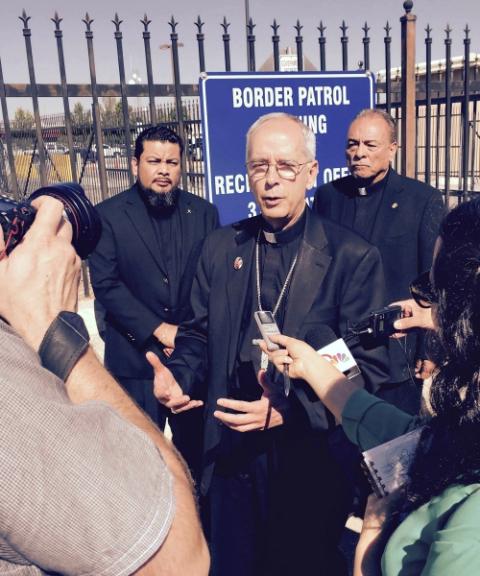 Bishop Mark Seitz of El Paso, Texas, speaks to reporters before attending an Aug. 7, 2017, meeting with immigration officials to try to stop the imminent deportation of a mother whose 8-year-daughter was in a Texas hospital being treated for bone cancer. (CNS/Hope Border Institute/Courtesy of Dylan Corbett)

One such border bishop is Mark Seitz of El Paso, Texas. A Midwest native, Seitz came to El Paso in 2013 and has made immigration concerns a priority. He has made parallels between just immigration policies and the bishops' opposition to abortion, calling for more humane treatment of children caught crossing the border.

"Like the unborn, these children are vulnerable to violence, both on their journeys and in their home countries, and the church is obligated to defend the least of these," Seitz said in 2014.

In a 2017 pastoral letter, Seitz called for an end to militarizing the border and argued for a moratorium on deporting nonviolent immigrants.

Bishop Daniel Flores of Brownsville, Texas, has called cooperating with immigration policies that unjustly deport immigrants comparable, for Catholics, as cooperating with intrinsic evil. In an interview with Crux, he said that supporting unjust immigration laws makes Catholics complicit, as in the case of a person who drives a woman to a clinic to undergo an abortion.

Across the Midwest, small towns and rural communities have been transformed by the presence of Latino and other immigrants who are attracted to work in meatpacking and other industries.

This month, Archbishop Michael Jackels of Dubuque, Iowa, participated in a prayer service commemorating the 10th anniversary of an ICE raid on a meatpacking plant in Postville, Iowa, that resulted in hundreds of deportations.

The raid disrupted life in Postville. The jobs at the meatpacking plant were later taken by Somali refugees after Mexicans working in Postville were deported.

"We should weep as a form of prayer, tears that will wash hearts, soften hearts," said Jackels at the anniversary prayer service.

'They are our people'

Bishops with conservative reputations have sometimes provided a boost for immigration supporters. San Francisco Archbishop Salvatore Cordileone supported Jesuit parishes that have designated themselves as immigrant sanctuaries, and he publicly backed an immigrant who was threatened with deportation in his archdiocese.

Archbishop José Gomez of Los Angeles, a Mexican immigrant himself and a member of Opus Dei, has been outspoken in defending immigrants in the nation's largest archdiocese. 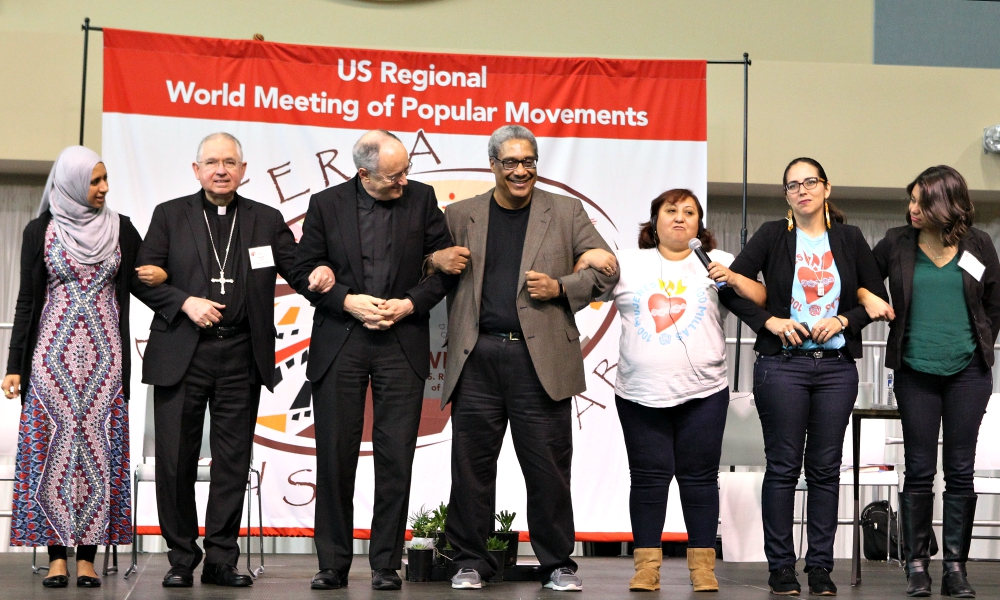 New York Archbishop Timothy Dolan, who holds a doctorate in American church history, was an early critic of Trump's campaign rhetoric, seeing it as a return to historic American nativism, both anti-immigrant and anti-Catholic.

"I can tell you the Dreamers are not criminals, aliens, problems, or intruders. They are us. They are our people," he said.

When former Trump administration official Steve Bannon argued on CBS' "60 Minutes" that the Catholic Church was supportive of immigrants because it was concerned about filling its pews, Dolan hit back hard, calling Bannon's remarks "insulting" and "ridiculous."

Dolan has his critics, who say he has not been as vociferous in criticizing Trump administration immigration policies as he has in criticizing Democrats. The cardinal offered the public prayer at Trump's inauguration. He invited Speaker of the House Paul Ryan to speak at a charity dinner, despite protests that Ryan has been unwilling to allow a vote in support of Dreamers.

In a Wall Street Journal column, Dolan castigated Democrats for slamming the door on Catholics concerned about abortion. He has not used similar language about Trump's hold on Republicans and immigration.

Caution, some argue nuance, permeates the statements of some bishops on immigration.

Bishop Peter Jugis of Charlotte and Luis Zarama of Raleigh issued a statement on immigration for North Carolina Catholics this year. That statement carefully noted, "There is room for disagreement and discussion with respect to immigration policy," a space that is rarely part of Francis' comments on the subject.

The discussion of sanctuary

While there are differences in nuances and commitment, the subject of sanctuary for undocumented immigrants is one that has raised substantial policy differences among bishops.

The sanctuary movement has largely been confined to urban Protestant churches that have opened up their buildings to house those in danger of deportation. So far, federal authorities have left those churches alone, although there is no law saying they need to respect church property in enforcing immigration law.

Most Catholic bishops have either avoided the discussion of sanctuary or spoken out against it as an ineffective tactic. Seitz, for one, said that he could not support sanctuary churches because it would raise false expectations for immigrants that they could be permanently protected by the church.

Bishop Peter Libasci of Manchester, New Hampshire, in April 2017 said his diocese would not allow for sanctuary churches. "Sanctuary is not a designation respected by law," he said in a statement to his priests. A similar objection was raised by Cardinal Donald Wuerl of Washington. 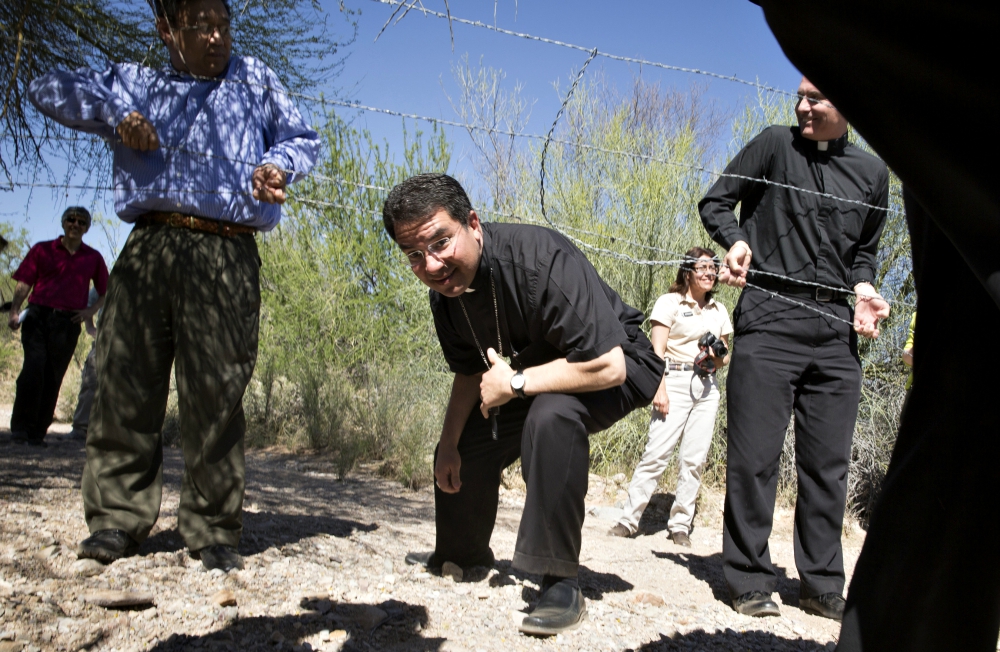 Bishop Oscar Cantú of Las Cruces, New Mexico, ducks under a barbed wire fence as a group of U.S. bishops tours an area of the Arizona desert north of Nogales in 2014. (CNS/Nancy Wiechec)

Other bishops have disagreed.

Among them is Bishop Oscar Cantú of Las Cruces, New Mexico, who supported the decision of a Catholic retreat house in his diocese to offer sanctuary to immigrants threatened with deportation.

Dolan said he derives inspiration from the example of Archbishop John Hughes, his New York predecessor known for his fierce defense of Irish immigrants in the 19th century, including issuing threats against nativists who attacked church property and people.

Hughes drew criticism from many leaders of his time, including poet Walt Whitman, who called Hughes a "mitred hypocrite" because he supported immigrant "dregs of foreign filth."

Even with that Trumpian-type rhetoric, Whitman remained a poet, not a politician. Hughes, in retrospect, is largely credited with drawing Irish immigrants into an alliance with the Catholic Church that rarely wavered. Those immigrants knew that Hughes had their backs, even in the face of massive anti-immigrant violence.

Whether today's Catholic immigrants and their children will feel the same way about their church may well depend upon whether they get a similar sense about their bishops at a time of comparable immigrant angst.

This story appears in the Families Separated at the Border feature series. View the full series.
A version of this story appeared in the June 15-28, 2018 print issue under the headline: Defending immigrants.