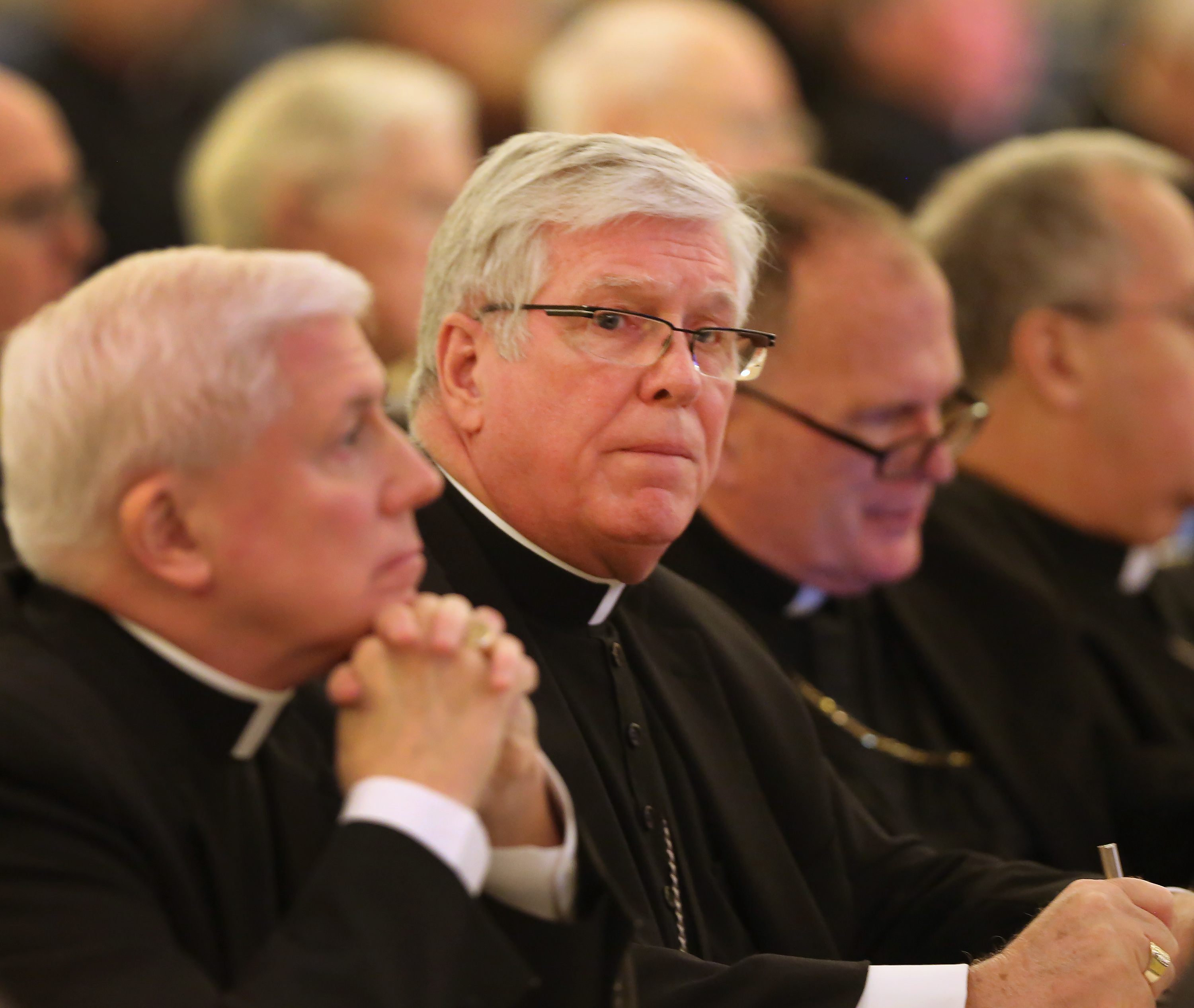 Bishop Frank J. Dewane of Venice, Florida, second from left, is pictured during the Nov. 14, 2017, fall general assembly of the U.S. Conference of Catholic Bishops in Baltimore. (CNS/Bob Roller)

An investigation taking more than two years is closed, with an authority offering a redacted version of a ruling, leaving behind confusion and anger in its wake.

The place is the Diocese of Venice, Florida, where Bishop Frank Dewane has imposed penalties on Fr. Christopher Senk, 70, a pastor accused of exploiting a wealthy heiress, while much of his parish pleads to have him restored to full ministry.

Senk was pastor of St. Isabel Church on Sanibel Island, Florida, a wealthy resort community, until he was ousted by Dewane in October 2016. For the past two years, he has been suspended with pay while awaiting the results of a case brought against him by Dewane with the Vatican Congregation for the Clergy.

In imposing sanctions on Senk, Dewane said that a decision by the Vatican's Congregation for Clergy, parts of which he made public in late March, proved that Senk was guilty of "impropriety and even exploitation" when he received thousands of dollars from Marion McIntyre, who has since died. Family members of McIntyre charged Senk with using undue influence on his parishioner, whom they claim suffered from dementia. Parishioner supporters of Senk argue that was not the case.

The congregation offered no public report and, according to Fr. David Deibel, Senk's canon lawyer, enjoined subjects from publicly commenting on its findings, which were read to the parties via a phone conference.

A group called Parishioners for Justice has supported Senk, arguing that the pastor has been railroaded because he was a signer of a petition to the apostolic nuncio questioning the bishop's leadership style as autocratic and non-collegial.

Senk is one of 10 priests to sign a petition in 2014 accusing Dewane of bullying priests and failing to observe canonical rules regarding consulting advisory bodies on the sale of church property and other diocesan business. The petition was sent to then-Vatican nuncio Archbishop Carlo Maria Viganò, and while the signers requested anonymity, at least some of the names became known.

"There is no financial transparency in the bishop's office," the petition said, adding that Dewane leads the diocese via "intimidation, use of fear, shaming, bullying and other non-Christian behaviors." The petition said that the bishop, who was named to Venice in 2006 and now serves as chairman of the Committee for Domestic Justice for the U.S. bishops' conference, is prone to outbursts of rage and "blasphemous language."

Senk was cleared of criminal wrongdoing in the McIntyre case by the state of Florida. His supporters issued a statement April 4 which said that the "decisions communicated by the Bishop are unwarranted and unjust, and the Bishop's letter itself is, unfortunately, misleading."

The parishioners' group, which has organized demonstrations and prayer vigils in support of their ousted pastor, said that Senk was the beneficiary of a gift, and did not connive or exploit McIntyre, or solicit gifts from other parishioners. The demonstrations of support for Senk on the parish grounds have been banned by the acting pastor.

"For the Bishop and the Congregation to order Fr. Christopher to move to a remote facility for a year of 'prayer and penance,' when he has done nothing warranting any punishment, is unwarranted and cruel.  It disregards the fact that he already has been excluded from his home at the rectory, banished from the parish, and forbidden to celebrate the Sacraments publicly for two and a half years," the statement said.

It added, "The actions and activities of the Bishop of Venice are abusive and require assertive reactions that call for an end to this behavior," the group statement said, adding that parishioners "cannot stand by while a good priest is vilified and attacked."

Dewane is not commenting publicly beyond his statement to the parish. In that statement, he described his actions as consistent with his obligation as a bishop.

"Please understand it is my objective to execute careful vigilance. This objectively ensures that in serving parishioners, the highest standard of prudence and moral behavior is observed," he wrote.