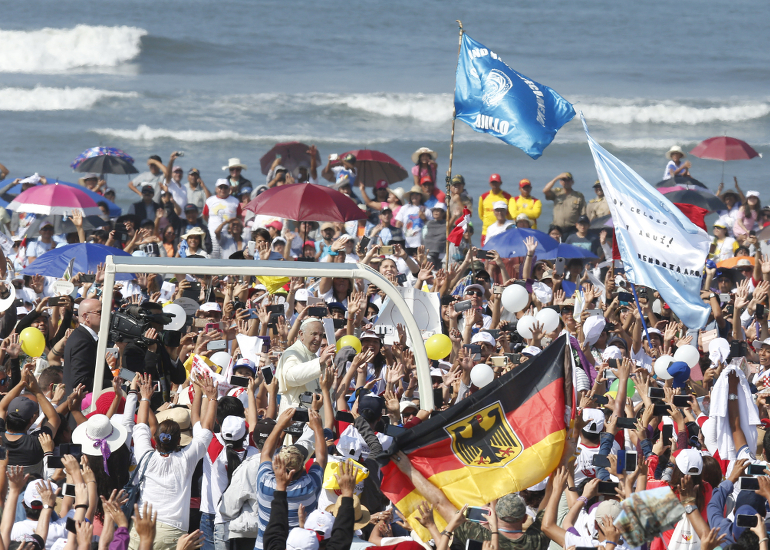 Pope Francis has called attention to gang-related killings in Peru's northern regions, lamenting the "devastating effects" of the violence during a Mass Jan. 20 with hundreds of thousands on the country's Pacific Coast.

The pontiff named in particular contract killings, saying they breed insecurity in the local population and "make us question ourselves as a community and test the strength of our spirit."

"At this moment in time, Peruvians do not have the right to lose hope," Francis told 200,000 people gathered on the beach in Huanchaco, a small resort town famous for its ruins of pre-Incan civilizations and its popularity among surfers for having some of the longest waves in the world.

But the area, about 350 miles north of Peru's capital Lima, has also seen increasing violence related to drug trafficking in recent years. Just last month five people were killed during an evening birthday party in Trujillo, the larger city just to the east of Huanchaco.

Francis spoke about the violence as part of a homily in which he also mentioned the area's susceptibility to dangerous flooding during the El Nino season, when the surface sea temperatures in the Pacific rise, leading to an increase in heavy downpours.

Trujillo suffered an especially difficult season last March, when deadly rain put much of the city center underwater, killing dozens. The Peruvian government estimates that some 293,000 across the country needed temporary shelter in 2017 due to the flooding.

The pope said the "painful consequences" of El Nino "are still present in so many families, especially those who are not yet able to rebuild their homes: This is also why I wanted to be here and to pray with you."

"In the midst of darkness, you ... were like living candles that lighted up the path with open hands, ready to help soothe the pain and share what you had, from your poverty, with others," Francis told those gathered, some holding umbrellas to keep off the sun as they stood on the sand with the backdrop of crashing waves.

The pontiff said that having faith includes practicing a "concrete" love, one that "can build and rebuild hope when it seems that all is lost."

"In this way, we share in God’s own work, which the apostle John describes in showing us a God who wipes the tears of his children," he said. "What a beautiful question the Lord will ask us: how many tears did you dry today?"

Francis is visiting Peru through Jan. 22 on the second leg of a weeklong journey abroad that started in neighboring Chile.

Later Jan. 20, the pope will meet with priests and religious at Trujillo's college seminary and take part in a Marian celebration at the city's Plaza de Armas, where Peru's independence from Spain was first announced on Dec. 29, 1820.

Earlier in the trip, Francis traveled Jan. 19 to Puerto Maldonado, a small city near Peru's southeastern border with Bolivia that sits at the edge of the Amazon Rainforest.

Meeting with some 4,000 of the Amazon's indigenous peoples, the pontiff criticized the ramp-up of the global extraction industry in the world's most biodiverse region and decried Peruvian national policies that he said "strangle" its some 350 native tribes.

The pope also met Jan. 19 with President Pedro Kuczynski at the country's executive mansion in Lima. In a speech to the him and country's political leaders less than a month after Kuczynski narrowly escaped impeachment over bribery charges, Francis exhorted them to fight what he termed the "social virus" of corruption.

Francis will continue his visit Peru Jan. 21 with a meeting with the country's bishops in Lima and then will celebrate an open-air Mass before heading off to Rome. The pope will arrive back in the eternal city in the afternoon of Jan. 22.