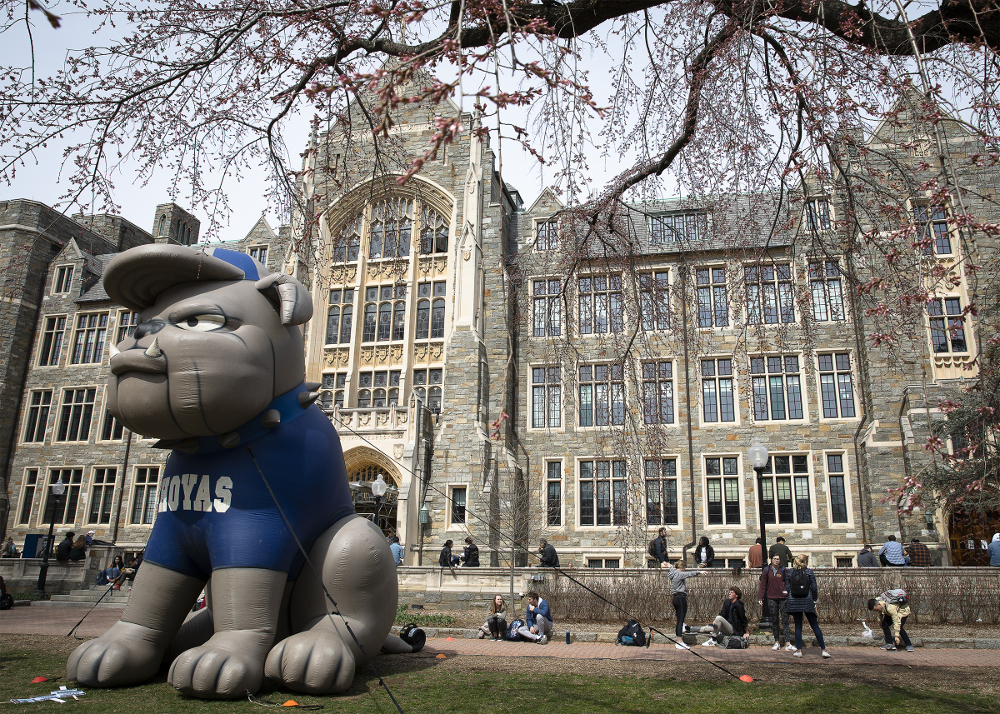 Students are seen on the campus of Georgetown University in Washington March 20, 2019. (CNS/Tyler Orsburn)

Undergraduate students at Jesuit-run Georgetown University voted overwhelmingly April 11 to pay a new student fee that would be for reparations to the descendants of slaves owned and later sold by the school.

The fee would be $27.20 per semester and the figure represents the 1838 sale of 272 enslaved individuals by the Maryland province of the Society of Jesus province for the benefit of Georgetown University.

According to the Georgetown University Student Association Elections Commission, which announced the results April 12, of the nearly 60 percent of undergraduates who voted, 2,541 supported the measure and 1,304 opposed it.

The vote was part of a nonbinding student referendum. Approximately 66% of students voted in favor.

USA Today quoted a statement from university administrator Todd Olson, who did not commit to the fund's establishment but said the vote provided "valuable insight into student perspectives."

The College Fix, an online national college news website run by students, reported that proponents of the measure hosted a rally on campus, "chanting, 'When they don't act — we fight back' and encouraging students to get out the yes vote."

The Fix also reported that opponents of the measure who handed out fliers explaining their arguments against the measure had those fliers "torn and discarded."

The university has collaborated with descendants in its work to remember its history of slavery and to work toward reconciliation, and it announced a couple of years ago that descendants' families will receive the same admissions benefits as other members of the Georgetown community, including faculty, staff and alumni.

In the fall of 2016, Georgetown announced that it will establish an Institute for the Study of Slavery and its Legacies. The university also has established a Department of African American studies and offers two courses that deal with the university's ties to slavery.

Georgetown University President John DeGioia has apologized for the university's role in slavery. "We express our solemn contrition for our participation in slavery and the benefit our institution received,” he said. "We cannot hide from this truth, bury this truth or ignore this truth."

The university also renamed a building as Isaac Hawkins Hall, after a 65-year-old slave who was sold in 1838 along with 271 other enslaved men, women and children by the Maryland Province of Jesuits to benefit Georgetown University, which was then facing financial difficulty.

It renamed a second building — the oldest on campus — as Anne Marie Becraft Hall, in honor of a free woman of color and pioneer educator who in 1820 founded a school in Georgetown's neighborhood to teach African American girls.

After the vote on the fee, student Alyssa Lisbon, who is from Missouri, said: "The human capital that we gained from the sale of these people is still benefiting us. Georgetown would have shut down without these people giving this kind of unwilling sacrifice, and so I think as a student who goes hear I am benefiting a lot from this education, so I owe it to these people and their descendants to kind of pay that back."

Another student, Flo Martinez from Uruguay, said that she empathized with the idea of paying reparations, "but I don't think it should be coming from the students."

A version of this story appeared in the May 3-16, 2019 print issue under the headline: Georgetown students vote for fee to pay reparations over slavery.