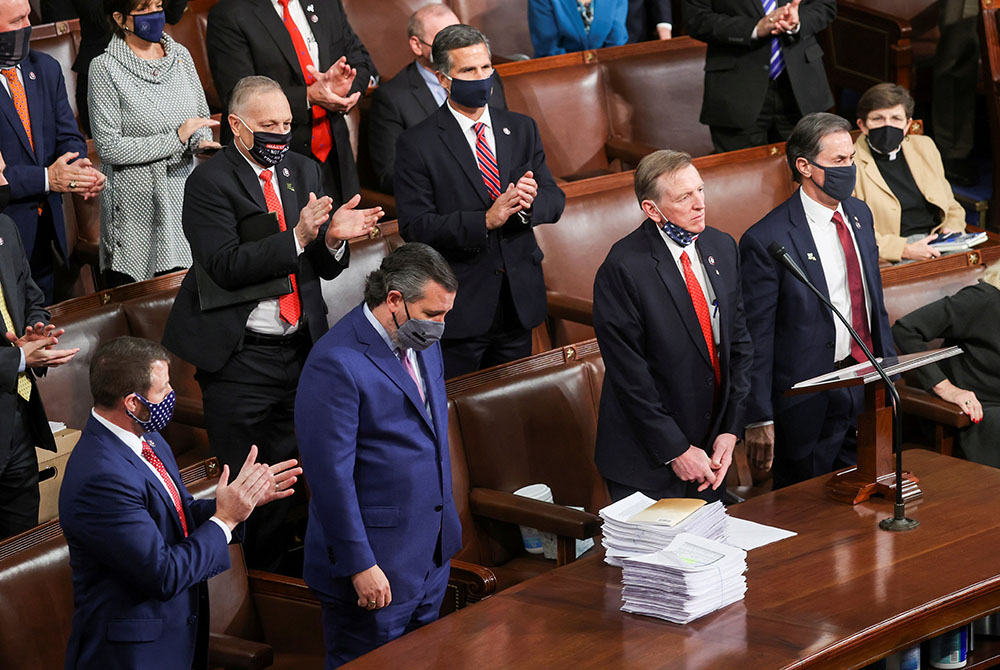 Rep. Paul Gosar, R-Ariz., right, and Sen. Ted Cruz, R-Texas, receive applause from Republicans inside the House Chamber on Capitol Hill Jan. 6 in Washington, for objecting to Arizona's votes during a joint session to certify the 2020 presidential election. Three of Gosar's siblings have called for his expulsion from the House. (CNS/Jonathan Ernst, Reuters)

While many Catholic families across the United States have struggled with ideological and political division in our increasingly polarized democracy, few have received as much national and international attention as the Gosars.

"The U.S. government is as fractured as my family," Bernadette Gosar, an 87-year-old mother of 10 adult children from Pinedale, Wyoming, told NCR. "This has been the most hurtful part of my life."

In recent weeks, three of Bernadette and her husband Antone Gosar's children have called for their brother Paul, who represents Arizona's 4th Congressional District, to be expelled from the House of Representatives. They allege that their brother, a Republican and staunch supporter of Donald Trump, played a role in inciting the Capitol riots on Jan. 6.

According to Newsweek, Paul Gosar, a Trump ally, was identified by activist leader Ali Alexander as being one of three lawmakers who helped plan the attempted coup.

"We see this as our duty as citizens," Paul's brother, David Gosar, a lawyer living in Jackson, Wyoming, told NCR. "We cannot have our Capitol attacked and see no one pay the price except for the little boys playing soldier with their military gear. The people who instigated this also need to be held accountable."

Jennifer and Tim Gosar also told CNN's Alisyn Camerota that they were not surprised by their sibling Paul's involvement due to his "pretty right-wing to extremist" background. "He peddles in rumor, he peddles in propaganda and he lies consistently to the American people and to his constituents," Tim said on CNN.

David hopes his speaking up gives others the courage to stand up to their own family members. "If everyone gives their racist family members a pass, racism gets perpetuated," he said.

This is not the first time that David and some of his siblings have tried to end their brother's political career. In multiple congressional elections, they have publicly endorsed his Democratic opponent.

"People say we have a political divide in our family, but that is not the case," said David. "Tax policy is a political issue, but not this. Paul is associated with every white nationalist group in the country — the Oath Keepers, the Proud Boys, people like Steve Bannon. The garbage he's trafficking in is not politics. Racism and anti-Semitism are never excusable, and they shouldn't be sanitized as 'political differences.' This is about right and wrong."

David believes that his brother became radicalized over time and notes that he and his siblings waited seven years before publicly speaking against him. "My siblings and I do not want to get attention. We get nothing out of this. For seven years we held our peace. But when he supported anti-Semitic accusations against George Soros, that was too much. And now we just want to expel traitors from Congress," he said.

When asked how he believes his brother adopted his staunch pro-Trump views, he blames the Catholic Church he was raised in and which he left as a teenager. "The church is an authoritarian structure. Look at the authoritarians in the US government now — Barr, Bannon, Kavanaugh — and you'll see they're all Catholic. Republicans and Catholics were radicalized in the 1970s around the abortion issue, trying to go against the liberalization of the 1960s. Paul got radicalized in that way and went down the slope until becoming the fascist he is now."

Catholicism has played a role in Rep. Gosar's career. He was the sole legislator to boycott Pope Francis's 2015 speech at the U.S. Capitol, criticizing the pope's views on economics.

Related: Congressman to sit out pope’s address due to expected climate message

Bernadette, again, has a different perspective from her son David.

"I always loved children, and I wanted mine to become their best selves. They were exemplary students who grew up to have exemplary careers. Besides Paul, I have two lawyers, a doctor, an engineer, an interpreter, a private investigator and a former candidate for governor of Wyoming. They were all raised Catholic, but when they went to university, they lost their faith. I think that's why there's this bitter animosity. When you take God out of the picture, there's a void."

She stated that the last time she saw her children getting along was in 2014, when her son Pete — a self-described progressive who chose not to denounce Paul — ran for governor of Wyoming. "I campaigned for him and voted for him. He's a Democrat, but he had a lot of ideas I supported. He's a good person. Actually, Paul was running at the same time in Arizona. I put on a large family reunion, and it went all right. But there has not been another one since," said Bernadette.

"I will defend my son Paul," Bernadette told NCR. "He's a conservative and I am too. The ones who came out against him have nothing on him. He acted within his constitutional rights. They will find no proof that he incited the Capitol riots because no such proof exists."

She added that her son is well respected in his district. "He does very little campaigning because he doesn't need to," she said. "When he comes home from Washington, he holds free coffee hours and listens to people's concerns. His right-to-life voting record is 99%. He is open about his activities. People love him because they know they matter to him."

David disagreed. "He has lied throughout his congressional career. He lives in Flagstaff, not in his own district. He told people he'd move there when his daughter finished high school, but he hasn't done it."

Though he was the best man at Paul's wedding, David no longer considers him a brother. "I am no longer related to him because of who he is and what he stands for. I don't care if he changes — he's not welcome near me. He deliberately supported putting kids in cages, arresting DACA kids [referring to the Deferred Action for Childhood Arrivals program]. He has peddled in hate," David said.

It was not always this way. "We had a good relationship when we were young. We had a wonderful childhood. We played sports, had parties, climbed the mountains. We talked about current events, always in an amicable way. It was fun. Even when he first ran for office, we did not have a falling out."

Mike McGillicuddy, a Chicago-based social worker who leads workshops on political polarization among family and friends, sees this story as a tragedy. "There is deep sadness here. The first level is with the parents. All parents want harmony among their children and hope their children to support one another when they are gone," he told NCR.

While McGillicuddy stressed that he in no way deems Paul Gosar's far-right stances and actions acceptable, his next level of sadness is for Paul and the siblings who have publicly denounced him. "To me it seems like there is dogmatism on both sides. I think we make a huge mistake in focusing on differences rather than similarities."

"Labeling people allows us to redline them out of empathy," he said. "To me there is no question that Paul Gosar should be held accountable and maybe removed from Congress. ... But it's not true that he should be exiled from his own family, just as it's not true that all Trump voters are 'deplorable' – it's unfair and un-Christian to see people that way, and it often further solidifies extremist views."

McGillicuddy's third level of sorrow is for the members of the family who are silent in this story: the siblings who did not voice opposition, as well as Paul Gosar's wife and children. "I don't want to be a voice in favor of Paul Gosar. I am a voice for saying that interpersonal relations and family relations are complicated. There is a great deal we will never know about this family,"* he said.

"I'm sure Paul believes he is a prophet. My approach is to say, 'Hmmm — what is going on with that? Why do some Trump supporters do that?' Without slipping into 'it's not so bad,' let's try to understand what is going on and recognize there's a lot we cannot know," he said.

McGillicuddy agrees with Bernadette Gosar that when faith is lost, something else must fill the void. "The idea of lament jumped out at me — 'My God, my God, why have you abandoned me?' I am imagining that some of the siblings and the mother feel abandoned. There is a deep hurt," he said.

Rep. Gosar's rejection of Pope Francis reflects a troubling division within the U.S. Catholic Church, said Mike Lewis, founder of the blog Where Peter Is and a longtime observer of conservatism within the church.

"I think the Catholic Church in the US is in danger of de facto breaking," Lewis told NCR. "There is a lot of healing that needs to take place. Most Catholics around the world have a positive view of Francis, but a lot of very sincere Catholics in the U.S. are being fed a false narrative about him."

Lewis said that conservative Catholics such as Paul Gosar have become comfortable with the anti-abortion GOP's entire platform — including its stances for the death penalty and against immigration — and in this they are in error.

"Francis has made it harder to ignore certain issues. Writing an encyclical on climate change and urging the global community to come up with regulations to care for our common home goes against the Republican Party," Lewis said. "Also, when Francis said that economic inequality is the root of all social evil ... you can imagine this idea seemed foreign to a small government, 'pull yourself up by your bootstraps' mentality. Francis has challenged many ideas that U.S. conservative Catholics have become comfortable with just because Republicans were closer to Catholic teaching on abortion."

For McGillicuddy, the answer to these divisions is to focus on what we share.

"The story of the Gosars reveals how families are strained at this time. And in general, we have a hard time managing ambivalence and ambiguity. Certainties pull on us because they are totalizing and simplify our lives," he said. "I'm not invalidating Paul's siblings' views or casting judgment on their decision to denounce him. But we need to remember that we are all looking for community and belonging."

*This story has been updated to remove an inaccurate quote.