US Catholics cope with political divides among family, friends 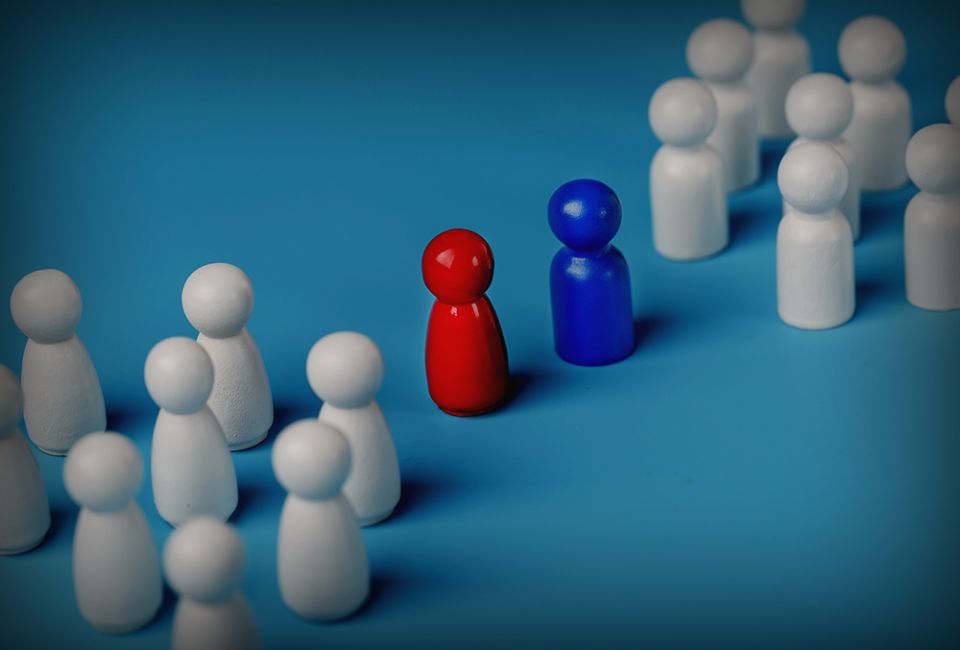 When Elizabeth Kale and Susan Miller met five years ago in East Dubuque, Illinois, while sharing an hour of eucharistic adoration, they immediately connected.

"I love Elizabeth's children, and if ever I'm having a bad day, I just step onto their porch, and they treat me like I'm the best thing since cream cheese," says Miller, an artist and married mother of grown children who has come to think of Elizabeth as a second daughter.

"I love Susan. There's something very motherly about her, very peaceful," says Kale, a married mother of five children and home schooler. "She heals herself by loving others."

It was only after four years of friendship that their opposing political views came to light.

"I discovered it just this year when I saw the Trump signs in her yard. Her small daughter asked me if I loved Trump. Feeling some discomfort, I replied, 'No. I love Jesus,' " says Miller. "Later, when I shared my views with Elizabeth, I felt heard and respected. I am not going to compromise friendship for political beliefs."

"Susan is my family's first Catholic friend who is a Democrat," says Kale. "You can't be mad at someone for the party they belong to, though it's difficult when Biden identifies as Catholic but supports abortion. In general, I find it easier to not discuss politics, unless we can sit down and speak one at a time while the other person listens."

Unfortunately, such friendships across party lines are becoming rarer in the current political climate. Anna McLellan, a pseudonym for a Bay Area educator who does not affiliate with any party, has felt alienated from her large, predominantly Trump-supporting family. She wants to remain anonymous because the family emotions remain too raw.

"It's been hurtful to feel that some of my family ties have been broken over politics. It's so odd to see such a huge rift between what it means to be Catholic Christian for some people," she says.

"I really try to understand the other side, but I can count on one hand the number of family members who have stayed in touch," she says. "It's not that my Trump-supporting family has written me off, but there is always tension, always an elephant in the room."

People on both sides often feel they must be watchful of what they say. Michael P., from Dallas, voted for President Donald Trump twice due to the abortion issue as well as concerns about the economy. He wants to remain anonymous because the divisions in his mostly pro-Democratic family is a point of contention. He says he is an anomaly among his close friends and family, including his wife.

"I've gotten to the point where I can talk about politics, but I've learned to not get emotionally worked up, to be somewhat guarded about what I say. With liberal friends I don't think I'm ruining relationships, but they look at me differently. I wasn't going to put a Trump sign in my yard — I'd be afraid of negative attention." 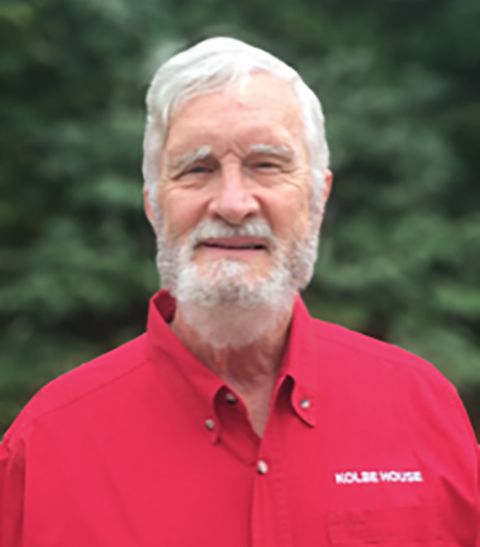 Mike McGillicuddy is a Chicago social worker who leads workshops on overcoming ideological divisions. For him, polarization in the Catholic Church did not begin in the past five years, but with the Second Vatican Council.

"From 1965 to 1970, there was an explosion; we were blown into the air and landed in different places," says McGillicuddy, who grew up in a conservative Catholic family, joined the Christian Brothers at 18, and lived with them for five years of dramatic change in the church and the world.

"Most people found their way to either a conservative place or a liberal place. I was always in between. It's as if there were two ice floes, and I have a foot on each. They are pulling apart from each other, but I want to stand on both."

McGillicuddy is particularly upset when people construe the other side in the worst possible light. "All the contested issues in the church are complicated, and there are reasons consistent with a person's worldview why they hold the beliefs they do. Having contempt for those people absolutely solidifies them in those viewpoints. How are we so attentive to the wounds we experience and unaware of the wounds we inflict?"

People on both sides agree that our current technology has intensified divisions.

"The internet has a distancing phenomenon that brings out the worst in people," says David Cruz-Uribe, a secular Franciscan, Knights of Columbus member and University of Alabama mathematics professor living in Tuscaloosa. 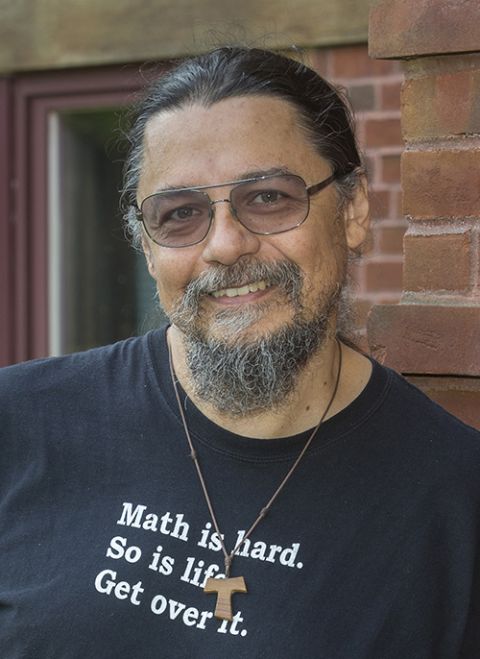 "When my wife and I moved to Alabama from Connecticut five years ago, we joined a Facebook group for area Catholics. It was great at first, but I quickly discovered the moderator could not handle any conflict, even closing off comments when there was disagreement," he says. "The whole ethos in the South is conflict-averse, but weighted toward certain cultural cues. And my experience has been that any attempt to discuss issues of race, unless you are with a small group of like-minded people, is very hard."

Rusty Lee, a mental health counselor and fellow member of the Knights of Columbus in Cruz-Uribe's parish, also sees the internet as a contributor to division. "There are individuals who may not be that radical, but they start regurgitating a controversial platform on social media just to get attention and feel more powerful," he says. "Also, there are politicians acting hypocritically, like Nancy Pelosi going to the hair salon and deflecting the criticism that followed. That hypocrisy is not good for society, especially if no one is holding politicians accountable."

For Dominican Sr. Quincy Howard, the divisions put forth by social media are about much more than personal choices to self-isolate in echo chambers. "There's a massive system that is really broken in many ways. From voting rights to gerrymandering to money in politics, the power structures are distorted," says Howard, a Washington, D.C.-based government relations specialist for the Catholic social justice lobby Network.

"We see a lot of macro-level forces pitting people against each other to maintain power. The reforms we're working on include things like disclosure rules for campaign finance, shifting the power to small donors rather than big donors, getting people to understand where messaging is coming from, and holding standards for truth. That is how I see myself contributing to this struggle for reconciliation — to even the playing field at the federal level," she says. "Reforms of the political system are critical to move past the impasse that we are currently seeing."

But for many Catholics, change begins at an interpersonal level. Matt Kappadakunnel, an investment banker from Los Angeles, comes from a politically mixed family and has friendships with Catholics of different political persuasions. 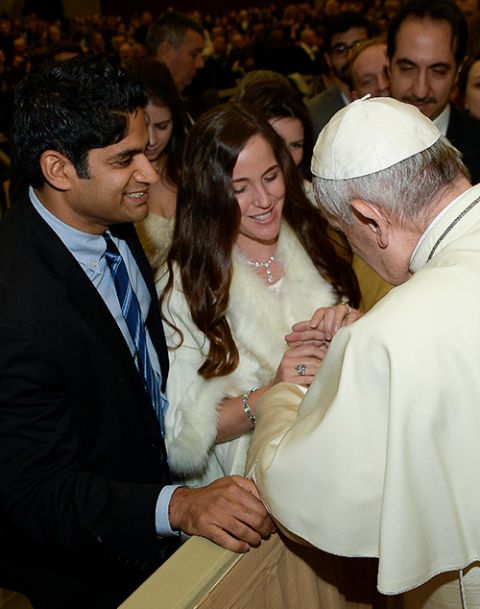 Matt Kappadakunnel and his wife, Bryana, meet Pope Francis at the Vatican in December 2017. (Provided photo)

"I try to practice what Pope Francis teaches: accompaniment," he says. "I try to recognize that both I and the other person stand on holy ground. I recognize that people's desire to support the unborn is a holy desire, and I have it, too. I also urge respect for people on death row, people of color, people who need health care but can't afford it," he says.

"The idea of evangelization can be very top-down, but Francis is advocating a Jesuit model of exchange, dialogue and sharing. I don't necessarily have to agree with what the other person says, but I must begin by knowing this is another child of God as a way of not demonizing them or putting them in a box," he says. "We are called to be bridge-builders in these circles, as Christ is a bridge between heaven and earth. I think it will be a radical call and challenge in the coming years."

Julett Broadnax, an 88-year-old Ignatian spiritual director from Kempner, Texas, who identifies as a centrist, tries to practice this accompaniment with her Trump-supporting son and daughter-in-law, with whom she lives.

"There's a lot my son and I agree on, but our way to get there is different," she said. "We both want the needs of people in poverty to be taken care of, for example; we think there should be programs to educate and train people, but he thinks these should not be a giveaway. We try to share our views using 'I' statements, as 'you' statements can be divisive."

Cruz-Uribe has crossed the divide in his Franciscan community. "Last fall, we read the writings of Archbishop Oscar Romero together and watched the biopic about his life. I think it was really powerful, getting middle-class U.S. Catholics to wrestle with notions that really lie outside of their comfort zones," he says.

"I am sure that there are people who voted for Trump due to the abortion issue," he said. "But we never talked about partisan politics; we discussed the common good, which in some ways is a more profitable conversation. As hard as it is for me to say this, I think those in my community who voted for Trump did so for the right reasons."

For McGillicuddy, crossover relationships are essential. "I suggest people ask if they have any Ginsberg-Scalia relationships in their life, and if not, would they want them?" he says, referencing the long-term friendship between the late Supreme Court Justices Antonin Scalia and Ruth Bader Ginsburg, who were ideological opposites but shared a passion for opera and intellectual discussion. "Many people don't, as it's a lot of work to connect with someone who's not like-minded. But we need these relationships to make sure we can talk to each other."

A version of this story appeared in the Jan 8-21, 2021 print issue under the headline: US Catholics cope with political divides among family, friends .

People | US Catholics cope with political divides among family, friends

Polarization is damaging the prospects for the 2016 campaign