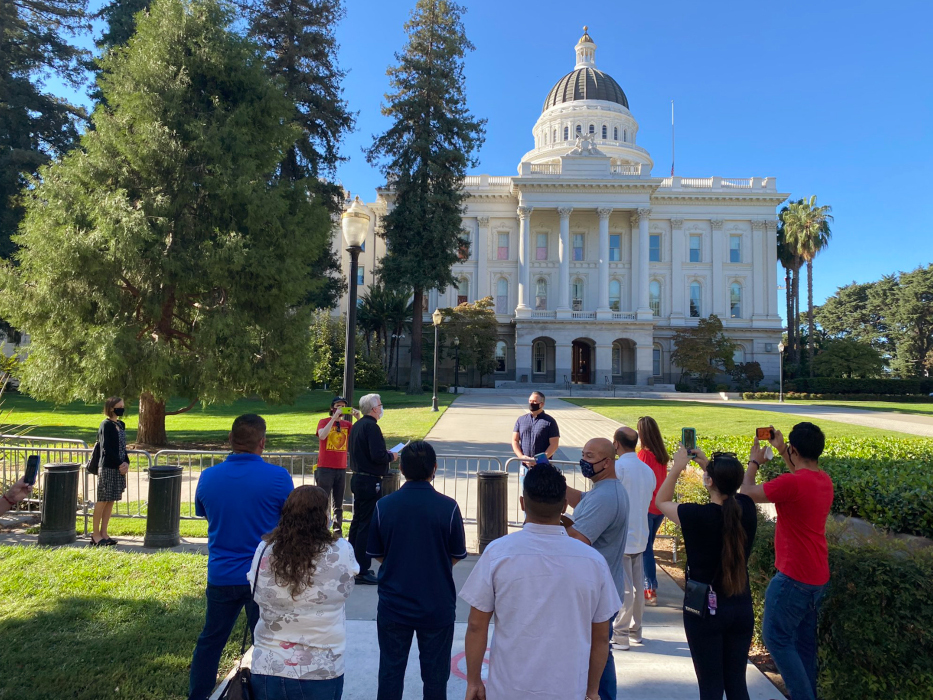 The Rev. John P. McGarry, center left, speaks outside the California State Capitol after leading a procession of laid-off hospitality workers from Sacramento's Cathedral of Blessed Sacrament to the Capitol. (Courtesy of Unite Here 11)

In March 2020, after the novel coronavirus started to spread in Southern California, Aimee Cazares was furloughed from her job as a chef at Loews Coronado Bay Resort, where she's worked for the past five years. Her own health insurance ran out in May, and with her father the only immediate family member working close to full-time hours, Cazares has spent much of her savings on hospital bills for her aunt, who was in a coma caused by COVID-19.

Now Cazares is one of thousands of hospitality workers who are urging California Gov. Gavin Newsom to sign a bill ensuring that those laid off due to the pandemic will be able to return to their jobs when the positions become available. The workers are organizing with the help of Unite Here Local 11, a union that represents 30,000 workers in Southern California and Arizona.

For good measure, Cazares, 26, and her family gather every weekend to pray the rosary, thinking of others who, like them, have struggled with job loss and health issues in the wake of COVID-19.

But she is not the only one praying.

In a letter Sept. 24, the Very Rev. Scott Santarosa, provincial of the Jesuits West province, based in Portland, Oregon, asked Newsom to "honor the often invisible labor of those who clean and care for our public spaces" by signing the measure into law. More than 50 Jesuit leaders and priests from across California, the state of Washington, Kenya and Mexico signed the letter.

Santarosa's letter quoted a homily by Pope Francis delivered on May 1, the feast day of St. Joseph the Worker. "We do not get dignity from power or money or culture. We get dignity from work," the pope said.

By calling workers back to their jobs once the economy improves, Santarosa wrote, "California will show the world the path we must take to recover from the economic disruption of this pandemic — honoring the dignity of working people." He also noted that the virus "has disproportionately affected the poor, people of color, and immigrants" and that the economic fallout has devastated "the lowest-paid workers who service our public spaces."

"This work is sacred, and we must treat it as such," Santarosa said. 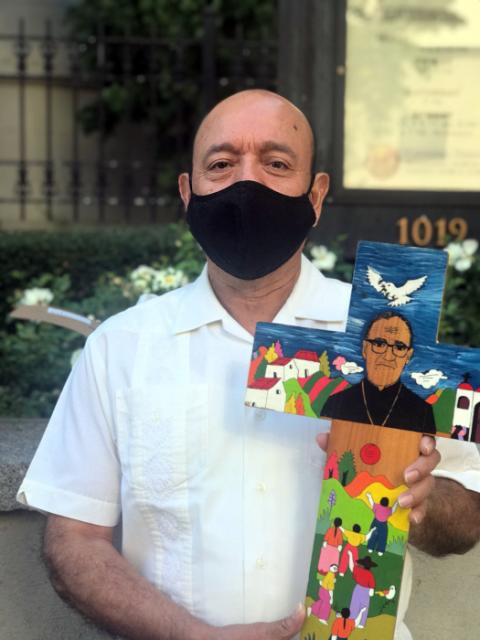 Carlos Barrera, 62, holds a cross with an image of St. Óscar Romero. Barrera, a native of Guatemala, lost his job working valet at the luxurious Chateau Marmont in Hollywood. He had been there 40 years. (Courtesy of Unite Here 11)

The letter was delivered to the governor's office in person by the Rev. John P. McGarry, president of Jesuit High School Sacramento, who led a procession of laid-off hospitality workers to the state Capitol.

Cazares, who is Catholic, is hopeful that the religious leaders' help will convince the governor — who has invoked his Catholic faith and Jesuit values in the past — to listen to their pleas. Newsom is an alumnus of Santa Clara University, a private Jesuit university.

Being a Catholic, Cazares added, is about standing up for the "small people."

Cazares, who has a degree from the Culinary Institute of America, has submitted several job applications while receiving unemployment. She hasn't received an email or callback from any employers. Nobody is currently hiring so it would be a very big stress not knowing where my future stands," she said.

Others in her situation are older and have devoted their lives to their work. Unite Here 11 has highlighted the stories of workers like 62-year-old Carlos Barrera, a native of Guatemala who lost his job working valet at the luxurious Chateau Marmont in West Hollywood. He had been there 40 years.

She fears that as businesses begin to reopen, hospitality employers will hire younger people for their posts and pay them less.

Sergio Sorza, a union organizer with Unite Here Local 11, said the group's workers represent a range of faiths, and support from religious leaders means a lot to them.

For the past seven days, as organizers and faith leaders have rallied outside the state Capitol to urge the governor to sign the bill, many have offered prayers at an altar set up for the workers.

For Newsom to endorse the bill, Sorza said, would show "he is staying true to his values."

The bill, known as AB 3216, benefits laid-off workers in hotels, private clubs, event centers or airports, or who provide services to office, retail or other commercial buildings. Newsom has until Wednesday to veto or sign the bill.