Morality and the meltdown 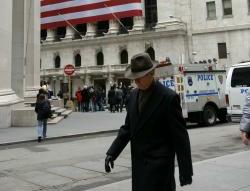 What’s a Catholic to think? Americans, Catholic and otherwise, look at the economic meltdown, at Madoff, at bonus bandits, get-rich-quick-bankers and subprime mortgage packagers and ask: Where’s morality? Where are ethics, when everything appears corrupt and crooked? NCR put these and other questions to Christopher Lowney, an author with an unusual background whose latest book, Heroic Living: Discover Your Purpose and Change the World (Loyola Press), leads toward some answers. Lowney was a Jesuit for seven years, then for 17 years a J.P. Morgan banker and managing director in New York, Singapore, London and Tokyo. He left the corporate world to volunteer and write.

NCR: Is what we’ve been seeing on Wall Street merely business as usual, with the curtain ripped open?

Lowney: It’s not an easy position to defend, but many of the most principled people I’ve ever worked with were at J.P. Morgan on Wall Street. And I’ve no doubt that continues to be the case: people who had plenty of opportunities every day to make dreadful -- from a moral perspective -- choices and [instead] made very tough choices.

What we’ve gone through in the last couple of years is very complicated -- people driven by greed, but call it self-interest. Environments where a lot of money’s at stake, a lot of power at stake, are very attractive to people who care only about themselves.

In Heroic Living you write about developing skills for a meaningful life. By implication you are referring to life in the corporate mainstream. But what is a Catholic to do if she or he is in the executive suite and realizes what’s happening when toxic assets are bundled, or in a mortgage firm where the unwary and unsuitable are being granted impossible mortgages? Does the Catholic become the whistleblower? Is that the responsible action? Or just take the risk of the unknown and resign?

For a Catholic in the executive suite that should be unambiguous. No legitimate company wants to be part of those things. To someone with executive power and responsibility the only question is: Do they have the courage to leave? Frankly, we saw people who preferred to leave rocks unturned rather than ask the difficult questions. When things are going apparently well in terms of earnings and your own bonus, there can be a strong incentive not to have the moral courage to ask these difficult questions. For executives those are straightforward, or should be straightforward, calls.

The rather more painful circumstance is that of people much further down the line. There, speaking truth to power can involve a huge amount of personal risk and people aren’t sure what the calculus will hold for them. It is in people in those situations we see our real moral heroes.

You write of the need to look and listen and thereby find God within us. At the book’s conclusion you return to your Jesuit roots and the examen, the deep ordering of our selves and our lives through the prism of conscience. You speak of the intuitive simplicity of it. Does it, though, require a degree of self-assurance and self-confidence, and a fairly high level of maturity to do this? The 22-year-old may come to different conclusions 10 years later.

The hope of the book is that you don’t have to learn it all the hardest way: realizing you’ve sacrificed your family to keep getting ahead in the company, or your life has finally fallen apart because you’ve been forced to confront the way you’ve behaved. The book’s point is that before we are forced through crisis to scrutinize what our life is about, we can and should take a moment to think about those things. [Given] the seductions of corporate life, it is a kind of a rat race. At a normal subconscious level you can give yourself over to this idea that “I will measure my whole life in a comparative basis: Am I getting ahead of that guy? Is my bonus bigger than that guy? Do I have more power and prestige in the company than that guy?” To me, that’s a very dangerous way to stake out one’s meaning and satisfactions in life.

I feel like I had a pretty well-thought-out sense of what is right and wrong and what makes life meaningful. But that doesn’t mean I was in any way an exemplar of living the things I cared about. You get into these environments where there’s a lot at stake, there’s a lot of upside, there’s a lot of fun, and it can be very hard to live according to what your better self tells you.

Business is risk-taking. Trading ratchets risk-taking to the level of gambling. You speak of appropriate risk, how we risk failure with every marriage proposal, job change, relocation, often where the odds of failure are greater than the odds of success. You said St. Ignatius of Loyola took risks founding a new order. But success isn’t a Christian injunction. Doesn’t Jesus just require us to “do,” with the outcome immaterial to the end result? It isn’t failure that’s the opposite of success, it’s not doing anything. Failure is just a good effort that didn’t work out -- at its core a Christian activity nonetheless. Success isn’t really a Christian injunction, is it?

At a certain level we could look at part of Jesus’ own earthly ministry as a kind of failure. His core team didn’t stand up at the moment of truth. That human part of Christ’s life is an interesting statement. In school particularly [you notice] conventionally smart people become very risk averse: able to master a narrow finite set of facts or tasks that have to be completed. But one of the things about life is you never have the same certainty about the right answer. And none of the answers may be right. [What’s required] is the courage to make the choice.

Acting in any arena of human life, in large, important matters, almost always involves risk and risk of failure. And in a way, maybe we come back to the point that if we worry, if we let the possibility of failing be our metric, therefore I won’t even try, it certainly works against the possibility of success, but it’s perhaps also an unchristian way of thinking about the world.

There’s that great line in your book about the “I want it so badly virus.” Bill McKibben, writing in Resist!: Christian Dissent for the 21st Century, asks: “How did we turn into a people who build houses the size of junior high schools yet still require storage lockers?” Would you care to hazard an answer?

I grew up in an apartment. Five of us shared one bathroom. I realize that even having a bathroom, even nowadays, makes us far better off than more than half the world. When I think about my own life, the idea of five of us sharing a bathroom doesn’t seem like the kind of thing we could manage any more. Life expectations have risen across the whole culture.

I do think this has something to do with the comparative versus contributive way of thinking -- about what my whole life is about. Unfortunately we don’t really bring it to consciousness, we get swept along: I need the bigger house, the better car, more money, or whatever the thing is, without really saying, “Wait a minute, why does this make sense? Why is this important?”

I lived in Tokyo in a geijin [foreign resident] apartment, kind of like my New York apartment -- average, by no means large by New York standards, two bedrooms, living room. Yet in Tokyo, more than once, the first instinct of a Japanese coming to my apartment was, “Don’t you feel lonely?” [The implication] was he wouldn’t want that much space. We [in America] are in an odd spot about money and all kinds of things.

You write: “No chief executive is consciously choosing to broker foolish deals in order to see his or her name in the paper, or to collect a big bonus (well, virtually no chief executive) ... Rather greed or pride infects us far more subtly.” There doesn’t seem to be much subtlety about some of the egregious money-grubbing and taking care of the boys by way of very foolish deals of late. Care to revisit that?

There may be some quotes in the book I’d be willing to die on the hill to defend. But I’m not sure this is one of them. In a way, I guess I’m trying to say these demons work in our lives: greed, desire for power and prestige, winning, wanting to be in control. All of these things can take hold of us in a way to sometimes have us make very dumb decisions.

Finally, quoting you again: “Rather than hunker down with the 60 percent of Americans who despair that their children will have a worse life than they have, can we be visionary enough to struggle for something better?” Can we? What would constitute “better”?

Early in the book I make the point that as a culture there’s a risk we’re getting a little bit lost, off on the wrong track -- for the reasons we’ve discussed -- about the things that are being valued and prized. Through an examen we get ourselves pulled on to a better track, each in so far as our own sphere of influence is able to help turn the culture a tiny way.

I suffer no illusions that I myself in any way will change the mainstream of the culture. I’m not suggesting anyone else could either. But if each us of plants our own stake in the ground, that’s how culture is changed.

Justice | Morality and the meltdown

After the Supreme Court's latest decision, who would want to work in a church?