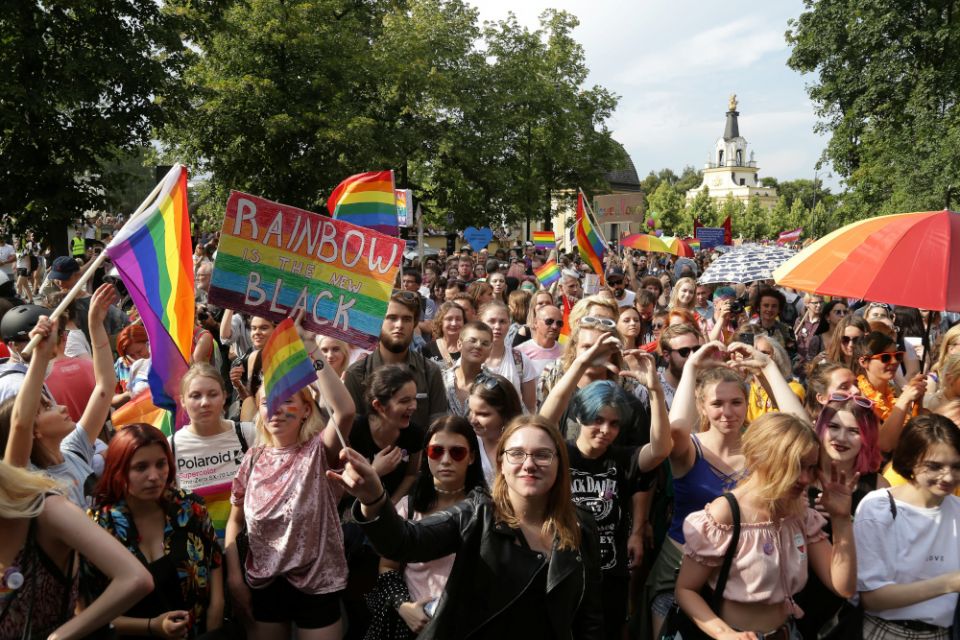 Warsaw, Poland — A Polish archbishop has condemned attacks on a gay pride rally by protesters claiming to be defending his cathedral.

Some, however, said his remarks were too little, too late, and that his earlier remarks incited violence against the LGBT community.

"Acts of violence and scorn are incompatible with the attitude of a Christian and disciple of Christ," Archbishop Tadeusz Wojda of Bialystok said July 22. "At the same time, I encourage prayer and care for the family and its internal purity, so our families, strong in God, can offer an example of beautiful love in the pattern of the Holy Family. These latest incidents show we still have much to do."

The archbishop issued the brief statement following violent reactions to a July 20 "Equality March" in the eastern city. Several marchers and at least 20 counter-protesters were arrested.

A commentator in Poland's Gazeta Wyborcza daily, Agnieszka Sadowska, accused Wojda of "blessing hatred," and said his earlier message, calling on Catholics to resist "the depravation of youth," had been "a disgrace."

In his July 7 pastoral message, Wojda told Catholics that LGBT campaigners had "insulted Christian values, profaned sacred symbols and uttered blasphemies against God," adding that the Equality March was "an initiative alien to our land and society" and "an act of discrimination against Catholics."

"The Gospel teaches respect and love for every person, and we try to follow this – but we cannot accept the deriding of our faith and depraving of our youth," the archbishop said.

Anna Dryjanska, a Warsaw-based campaigner for equal rights for LGBT people, said the archbishop inflamed "the faithful to violence against LGBT people" and said she feared the consequences if the "two-faced incitement" continued.

"There was a pogrom atmosphere in Bialystok – if the police hadn't been there in force, something truly dreadful would have happened," she told Catholic News Service July 24. "When it turned out people had been beaten and injured, the Catholic bishops washed their hands with banal statements about opposing violence."

Police used stun grenades and pepper spray to prevent several thousand aggressive counter-protesters from reaching the two-mile march, which was attended by around 800 LGBT campaigners from across Poland.

TV news reports showed demonstrators hurling bottles and rocks and spitting on marchers outside Bialystok's cathedral, while chanting "God, honor, homeland" and "Bialystok free of perverts." The media coverage drew reaction from government officials, including Prime Minister Mateusz Morawiecki, who said Poland should provide "a place for everyone."

In a July 21 statement, the Polish bishops' conference spokesman, Father Pawel Rytel-Andrianik, said the Catholic Church condemned "every form of aggression." He added, however, that the conference president, Archbishop Stanislaw Gadecki of Poznan, had warned the church also must continue speaking out against the "deadly sin" of homosexuality.

LGBT groups have frequently complained of discrimination in Poland, where the Catholic Church has rejected repeated requests for a pastoral service for homosexuals, opposed same-sex partnerships and backed the exclusion of LGBT staffers from Catholic schools.

Archbishop Stanislaw Gadecki, president of the Polish bishops' conference, told the Catholic Niedziela weekly July 21 that previous rallies had included the parodying of images of the Virgin Mary and Christian symbols in Czestochowa, Krakow and other cities, suggesting those demanding tolerance often incited "hatred for the church and its clergy," and turned their meetings into "places of blatant intolerance, obscene presentations and scorn for Christianity."

He added that recent revelations about sexual abuse by Catholic priests were being "used for attacks against the church with the aim of stripping away its moral credibility" as "the last voice in society not compromising with contemporary demoralizing trends."

NCR Podcast: A conversation on sexuality, gender and the Catholic Church