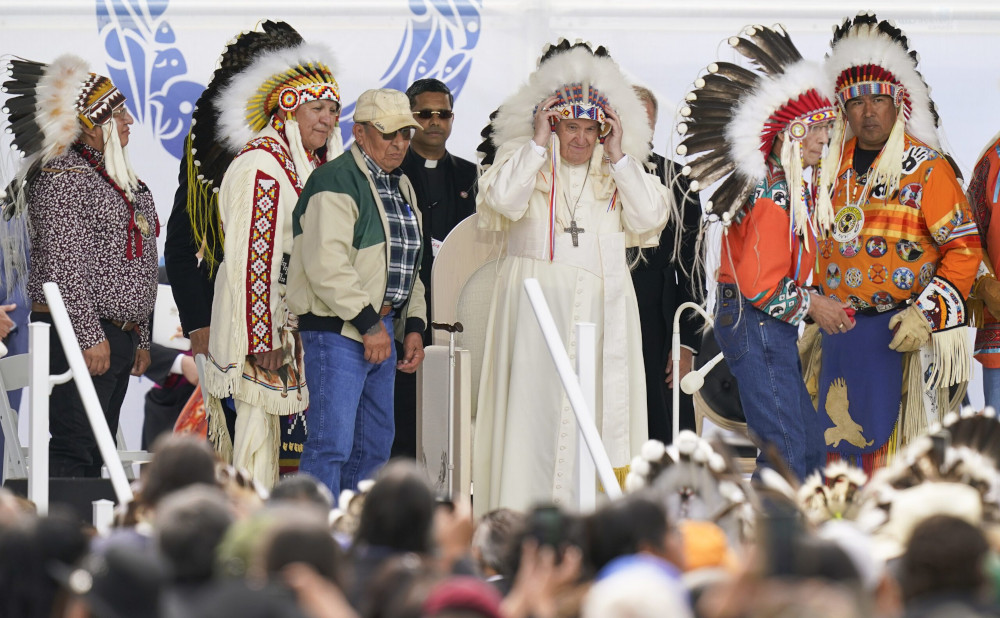 Pope Francis delivers his speech as he meets the Indigenous communities, including First Nations, Metis and Inuit, at Our Lady of Seven Sorrows Catholic Church in Maskwacis, near Edmonton, Canada, July 25, 2022. Francis was on a “penitential” visit to Canada to beg forgiveness from survivors of the country’s residential schools, where Catholic missionaries contributed to the “cultural genocide” of generations of Indigenous children by trying to stamp out their languages, cultures and traditions. (AP Photo/Gregorio Borgia)

In 2009 Pope Benedict XVI met with Indigenous leaders and expressed sorrow for the experiences of survivors, though not an apology. Now 13 years later, Pope Francis has traveled to the Indigenous communities of Maskwacis and Lac Ste Anne in Alberta to apologize for the Church’s role in the residential schools.

The apologies have been met with some relief and much outrage as survivors and their descendants balance their competing needs for resolution and reparation and as we analyze what was said and what was excluded.

But first: let’s talk about Junipero Serra, an 18th-century Franciscan priest, whose canonization was fast-tracked by Francis to coincide with a visit to the U.S. Serra founded nine of the 21 missions in California. The Spanish missions, much like the so-called English praying towns of the Northeast and not so unlike the residential schools that would follow, were closed communities for Indigenous people who agreed to convert.

Six years ago I went to the Gathering of Nations, a powwow in Albuquerque, New Mexico, that draws in thousands of participants and spectators from across what is currently the Americas. We took a circuitous route there and back that brought us through much of the Southwest, and that is how I found myself going from mission to mission in San Antonio.

Plaques tell the story of these missions, how the Catholic Church provided work and shelter for the local native people. How the missions were a place of safety for some tribes against the violence of others. The website says: “after 10,000 years the people of South Texas were faced with drought, European diseases, and colonization. In the early 1700s, many Native people of Southwest Texas foreswore their traditional life to become Spanish, accepting a new religion and agrarian lifestyle in hopes of survival.”

This history is as whitewashed as those buildings. The Church, too, was something we had to survive.

The missions were just one way Christians worked with the government to gather Indigenous peoples off of the land and into places where they could be transformed into citizens, into Christians, while making the land available for mining and agriculture and white settlement.

Around the same time as these Spanish missions took hold on the Gulf and West Coasts, praying towns on the East Coast filled villages with converts who were given access to housing and education. Then, in the late 1800s, Indian boarding schools (called residential schools in Canada) began when retired Civil War General Richard Pratt saw them as a way to “kill the Indian and save the man.” These schools proliferated across the U.S. and Canada. They were government funded and mandated but run mostly by churches — many of which were Catholic.

According to an article in Vox, historians looked at the birth and death records on these missions and found that more natives were dying than being born in the missions under Serra’s control. There were reports of physical violence and forced labor. Conversion wasn’t mandatory, but refusal had consequences, and soldiers were dispatched to find and return runaways. The more I read about these Spanish missions, the more they sound like the residential schools that would follow a century later.

Francis’ current trip was in response to pressure from survivors and one of many calls to action from a report published in 2012 by the Truth and Reconciliation Commission, a Canadian process that began in 2009. Yet, three years after the release of the TRC Report, which contained the demand for an apology, Francis rushed to canonize a man who perpetrated very similar harms.

Will he apologize for the missions and for Serra, too?

In his first apology, delivered at Maskwacis, the pope apologized for the wrongdoings of individuals, for those who abused those entrusted to their care. In Lac Ste Anne he acknowledged the Church’s role in these schools and that the Church had “defended the institution rather than seeking the truth and preferred worldly power over serving the gospel.” This is what institutions do. They protect themselves at the expense of the people who inhabit them. They assure themselves that the institution serves some greater good.

And what is the “greater good” that was served by Spanish missions and praying towns and residential schools? Because it wasn’t education. It wasn’t training in useful skills. It wasn’t agriculture or the building of communities or the development of relationship.

These prison camps, if we are looking for some commonality between them, served to disrupt Indigenous communities by severing our relationships to each other and to our beliefs. The Doctrine of Discovery, that collection of papal decrees and bulls that provided the theological basis for dispossession, had declared the lands and the people empty and ready to be filled with good Christians and Christian beliefs.

Is Francis prepared, as increasing numbers of Indigenous people are demanding, to rescind this doctrine that still impacts legal rulings? (In 2005 Ruth Bader Ginsburg cited it in her decision against an Oneida land claim.)

Throughout the Global South, in countries exploited by extraction industries and capitalism, impoverished governments rely on churches and denominations from Canada and the U.S. to fund schools for their children.

Churches are still imposing religion under the guise of education.

It is too easy to say they weren’t really Christians. Indeed, most atrocities done by the church are dismissed in this way. On one hand it does call people’s attention to the apparent contradiction between the Bible’s admonishments of love and care, but it also works to absolve the church of the harms it perpetrates. Structures like missions and residential schools are filled with people who, in carrying out the tasks of the institution, are capable of compassion and cruelty. But it is the institution that gives them the theology through which they justify their cruelties, and it is that theology that must be examined for where it can lead.

It is too easy to say they weren’t really Christians when, for the most part, it is not their theology you disagree with, only their methods.

I walked through those missions with my experience of the Gathering of Nations lingering in my mind, being in the stands while dancers streamed in on all sides. Normally at a powwow the dancers will come in through a single entry point, one style following another, but at this powwow, with hundreds, if not thousands, of dancers, they had to devise another way to get everyone in. The traditional dancers came in the traditional way, but the others came down the stairs all around the stadium.

As I stood among the seats with fancy dancers streaming in to my right and jingle dancers on my left, I was overwhelmed by the sounds and colors of the drums and dancers. It took at least 15 minutes for the dancers to enter the area, and the floor was a whirling, thumping mass of color, the sound of the drums a tangible thing in my chest.

We are still here.

Despite the best efforts of the Church and the governments who funded it, we are still here. Although many of us did not survive, as peoples we did. We regrouped and reformed. We are rebuilding language and ceremony. We are remembering who we are and how we connect to the places that still bear our names.