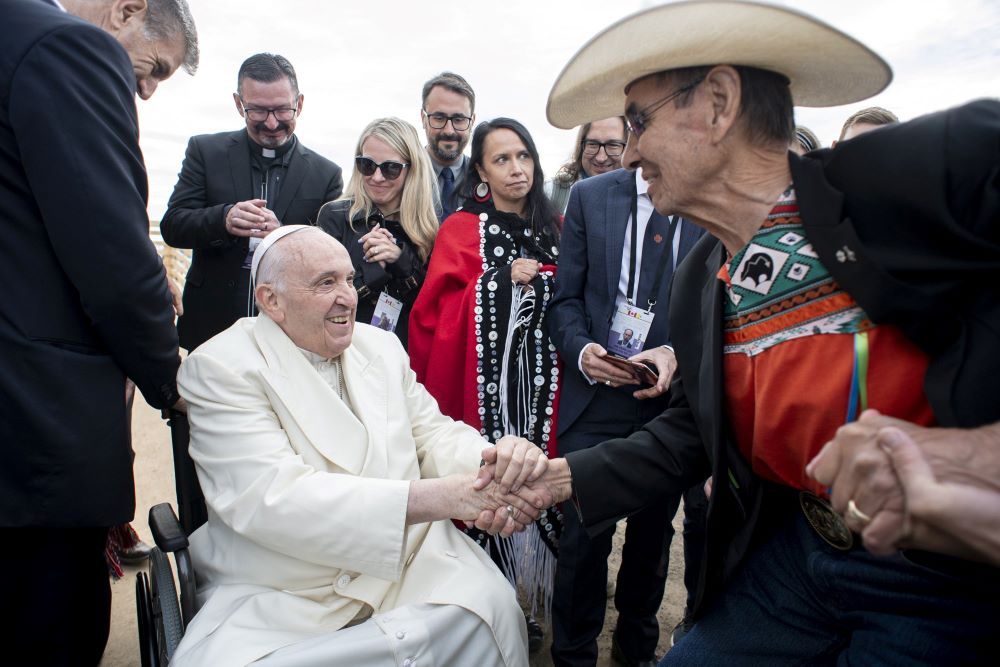 Pope Francis and Chief Wilton Littlechild say farewell July 29 in Iqaluit, Nunavut, as the pope prepares to return to the Vatican after a six-day visit to Canada. Littlechild, a 78-year-old lawyer, survivor of abuse in a residential school and former grand chief of the Confederacy of Treaty Six First Nations, had lobbied hard for the pope to visit Canada and apologize to residential school survivors. (CNS photo/Vatican Media)

"I was an angry man most of my life because society didn't understand us survivors... When you are abused that is all you think about. You think about it over and over again. Forgiveness is not about rewarding a perpetrator."

Amen to that. These words come from a survivor of a Canadian residential school. They were recorded by Miles Morrisseau, a citizen of the Métis Nation, and special correspondent for ICT (formerly Indian Country Today). And this is part of what Pope Francis tried to demonstrate in his penitential journey to Canada: Reconciliation is not a "get out of jail free" card. Reconciliation is a challenging, painful, messy and unpredictable journey.

Francis has heard the call for reconciliation. The pontiff set an example for all Christians, Catholic and otherwise, in his journey of penance for the sins of many of our spiritual ancestors, who were taught that discipleship and colonizing were compatible.

It is exceedingly rare that the leader of any large institution, let alone the largest transnational institution in the world, attempts to answer a call to reconciliation initiated by the survivors of a horrible evil perpetrated by that very institution.

Rarer still, is a religious leader who then freely responds to those calls with an authentic journey of contrition that includes truth-telling, accepting guilt, and begging pardon at places of significance for survivors and the vanquished for horrifying sins that previous generations carried out in God's name. The same sins — cultural genocide, dismantling of families, abuse of youth — whose effects upon the sinned-against have generated centuries of intergenerational trauma within First Nations, Innuit and Métis peoples.

For those of us who watched the pope's trip from a distance, it is alright to be skeptical. We have seen halfhearted attempts at reconciliation from many bishops in the wake of the clergy sexual abuse scandal. For those of us watching from a distance, then, how do we know that the pope's is an authentic attempt at reconciliation? How do we know he is not just participating in damage control or "brand management"?

Robert J. Schreiter, a Missionary of the Precious Blood, theologian, and peacemaker of blessed memory, delineated five distinctive characteristics of reconciliation from the Christian tradition. When these five are present in some way, it may be interpreted as an authentically Christlike attempt to walk the path of reconciliation

First, reconciliation is the work of God in which we are called to participate. God is the author and mover, and ministers of reconciliation seek to harmonize with how God's Spirit moves. In his remarkable July 25 address at Maskwacis, Francis invoked God's assistance, forgiveness and asked for prayers for the journey. The next day he deepened this resolve to this truth in his remarks at the pilgrimage site, Lac Ste. Anne (the sacred place the Dakota call Waka Mne, or "Holy Water," and the Cree call Manitou Sakahigan, or Spirit Lake).

Second, reconciliation begins with the victims. Perpetrators are unlikely to ever seek true reconciliation because they hold the power and greatly fear what they may lose. Therefore, God begins with the healing of victims, the restoration of their violated humanity, and their empowerment to envision and create a different world. They have power and agency in the process. Francis accepted the invitation from representatives of First Nations, Innuit and Métis peoples to Canada and we see God has begun with the victims. 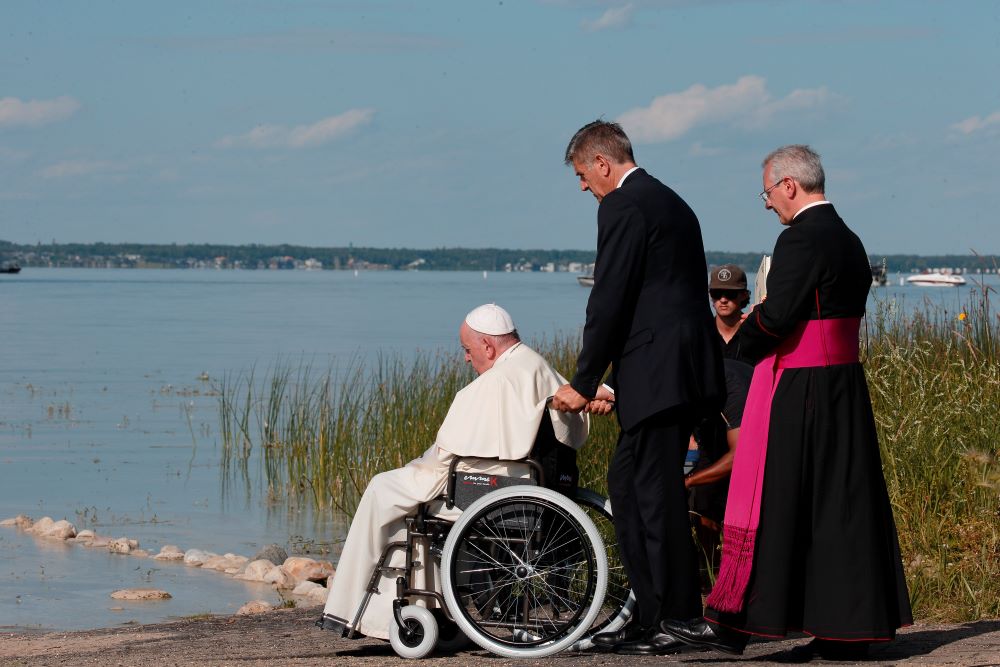 Pope Francis visits the lake as he participates in the pilgrimage and Liturgy of the Word in Lac Ste. Anne, Alberta, July 26. The visit came during his weeklong trip to Canada. (CNS/Paul Haring)

Third, God molds a new creation out of victims and wrongdoers. The past cannot be changed and it must not be forgotten. Through the movement of God's Spirit, victims learn to remember in a different way, one in which the domination of the wrongdoer's violence no longer controls their lives. They become a survivor with fresh scars rather than a victim with a mortal wound. Their relationship with the wrongdoer is transformed.

Fourth, this process of reconciliation finds its narrative home in the Paschal Mystery—the life, death and resurrection of Jesus. Survivors learn to unite their own pain and suffering with that of the tortured, crucified Jesus, follow his descent into hell and into all that is not God, and rely upon God's Spirit to bring about a kind of resurrection. The victim's story becomes part of God's story in Jesus' Passion. This integration of victims' and survivors' "small stories" into God's own story often precipitates the healing of memories and a new meaningfulness that arises out of the traumatic experiences that can lead to a new commission in life. This is not something that we can observe from afar.

Fifth, reconciliation will always be fragmentary and unfinished until God is "all in all" at the end of all things. It is a process and spirituality more than a well-managed plan or strategy. It has real results and healing indeed does occur. But the scars of survivors, like the wounds of the Risen Christ, are indelible. They do not disappear, they are not forgotten, but they can be transformed into healing wounds even though they may be unintentionally reopened at times by a known or unknown trigger or cause. A survivor is a reconciled person who has made progress in the healing process and in doing so often receives a commission to assist in the healing of others.

The orientation to the future is important because there is no returning to the status quo ante before the harm was inflicted. Colonialism, attempted cultural genocide and the specific evils of the boarding schools are facts of history. Time cannot be turned backwards to undo the sins of the past. 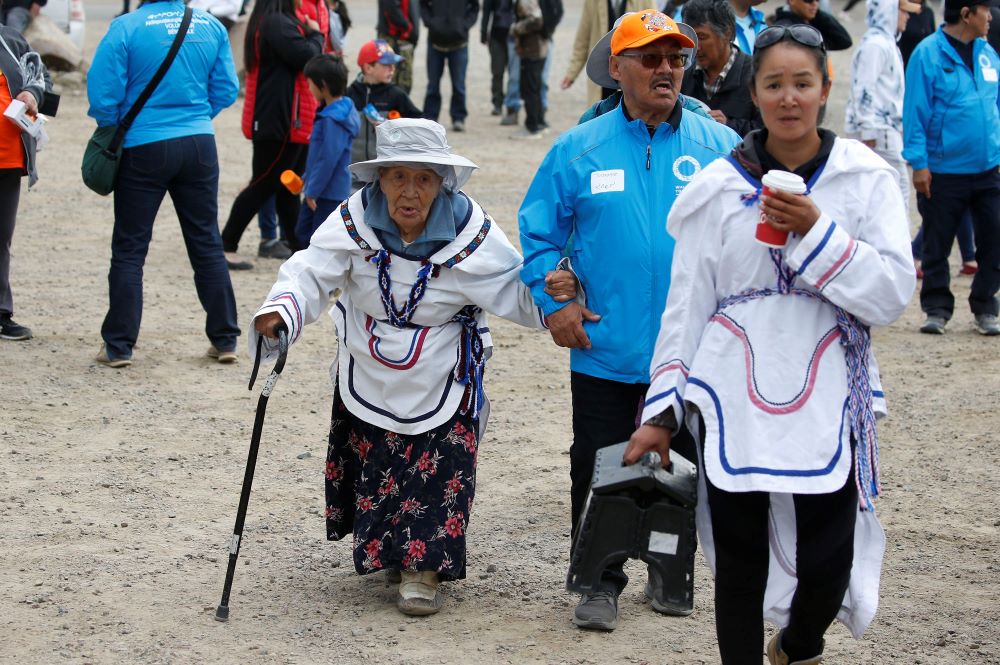 An older woman arrives for Pope Francis' meeting with young people and elders outside the primary school in Iqaluit in the Canadian territory of Nunavut July 29. The pope made the weeklong trip, which he called a penitential pilgrimage, to meet with Indigenous peoples and apologize for the church's role in residential boarding schools and cultural genocide. (CNS/Paul Haring)

Again, reconciliation is an uncertain process with no preordained outcome. Just like Jesus' ministry seemingly ended in failure at his execution, so too can reconciliation, even when authentically undertaken, be seen as a failure. After all, the victims, survivors and carriers of the trauma are not monolithic. Responses to the pope's initial apology on July 25 were as varied as the peoples who were harmed.

Morisseau's reporting in ICT offered a variety of responses. For some leaders, like Wilton Littlechild, Cree chief and former grand chief of the Confederacy of the Treaty First Six Nations, who is himself a survivor of residential schools and who heard the testimony of hundreds of survivors while serving as a member of Canada's Truth and Reconciliation Commission, the pope's apology on Canadian soil was important, necessary and could open the door to real healing for countless First Nations, Innuit and Métis peoples.

For other leaders, like Assembly of First Nations National Chief RoseAnne Archibald, it was a welcome start but insufficient. The pope did not renounce the 15th-century Doctrine of Discovery, which gave the Catholic theological justification for colonial violence, and the apology seemed vague. She observed: "I know that this today is about forgiveness for some people and there are people have come with that love and forgiveness in their arms, and there are other people who just don't feel like we quite got there today. I'm one of those people."

Many others had different reactions. Chief Rosanne Casimir of Tk'emlúps te Secwépemc, previously known as the Kamloops Indian Band, observed: "coming back here, and having a more lengthy, meaningful apology, was definitely something that really resonated, because he elaborated on colonialism. He talked about absolute regret and remorse and some meaningful steps moving forward."

Finally, Morisseau wrote: "Sandi Harper, of Saskatoon, Saskatchewan, who attended the papal event in honor of her late mother, a former residential school student, said healing will take time. Some Indigenous people are not yet ready for reconciliation. 'It's something that is needed, not only for people to hear but for the church to be accountable,' she said. 'We just need to give people the time to heal. It's going to take a long time.'"

In the aftermath of great evil, there is no "one size fits all" remedy. Reactions from victims, survivors, their families and their peoples were and will continue to vary. This is why Schreiter's work is useful here. The outcome will be God's ongoing work and will remain ambiguous for many, especially outsiders observing the process. Clarity is not a guarantee because reconciliation is more a spirituality than a strategy whose effects can be quantified. Reconciliation is God's work in which we are called to participate.

A Christian understanding of reconciliation encompasses the victims, their families, communities and webs of relationships. It then eventually extends to wrongdoers, accomplices, bystanders and the whole of creation and subsequent generations. For Christians, the painstaking and uncertain process is crystallized in narrative in the paschal mystery — the life, death and resurrection of Jesus.

With this in mind, Francis' penitential pilgrimage is a wonder. The promise of reconciliation is vast and precarious. So, let us keep everyone in prayer. And may Francis follow God's Spirit so that healing may occur and the journey indeed bear fruit.

This story appears in the Pope Francis in Canada feature series. View the full series.
A version of this story appeared in the Aug 19-Sept 1, 2022 print issue under the headline: The promise of reconciliation is precarious.