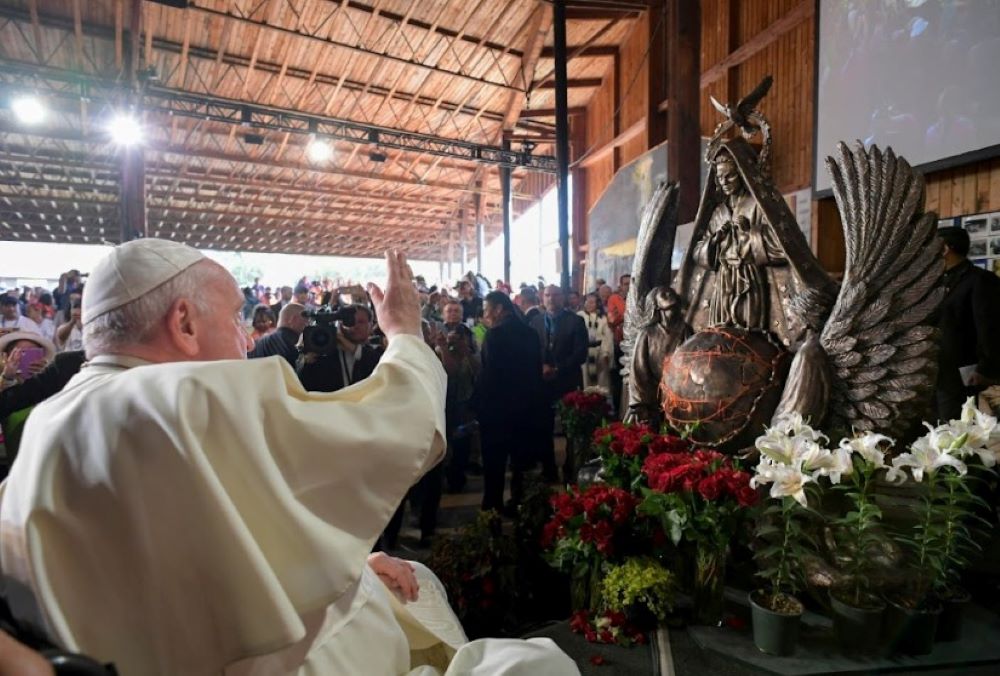 Pope Francis blesses Timothy Schmalz's bronze sculpture. Mary, Untier of Knots, on his second day in Canada, while visiting Lake Ste. Anne, the most popular pilgrimage site for Indigenous peoples in North America. The sculpture will be permanently installed there. (Courtesy of Timothy Schmalz)

In the same way that the 16th-century Renaissance artists left an indelible mark on the Vatican through work that still manages to communicate centuries later, in recent years, it's been the work of Schmalz, a Canadian-born sculptor, who has taken the messages of Francis' papacy and chiseled them into permanent form.

A year ago this week, Schmalz was putting the final touches on a new work inspired by one of Pope Francis' favorite devotions to Mary: Undoer of Knots.

When Schmalz heard that the pope was planning to visit his home country, he approached the Canadian bishops with images of his new bronze sculpture. Those images were sent to the Vatican and, according to Schmalz, it was Francis who said he wanted to give it as a permanent gift to the Indigenous peoples of Canada during his visit. 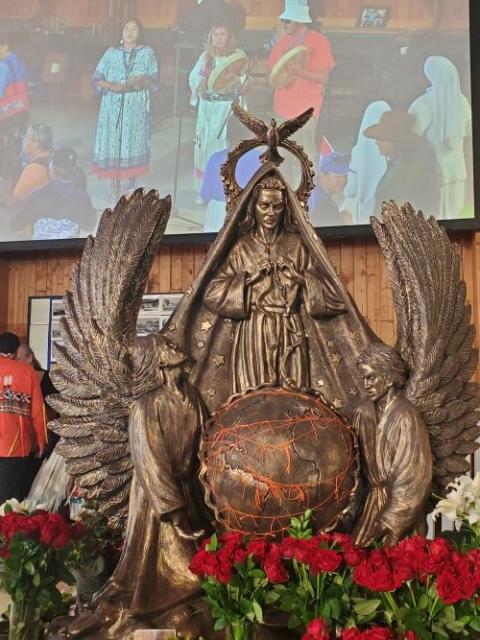 Timothy Schmalz's Mary, Untier of Knots, is seen during Pope Francis' weeklong trip to Canada, where he met with Indigenous peoples and apologized for the Catholic Church's role in residential schools. (Courtesy of Timothy Schmalz)

In some respects, Schmalz has become the in-house sculptor of the Francis papacy.

In 2019, his 20-foot bronze Angels Unawares,  which depicts migrants and refugees crammed aboard a boat as they flee war, persecution, slavery and other societal ills, found a home in St. Peter's Square.

The sculpture, the first installed in St. Peter's Square in several centuries, became an instant favorite of pilgrims crossing through the iconic piazza, and now replicas have toured the world.

Since then, Schmalz has gone on to create sculptures of human trafficking, which Francis has lamented as a modern form of slavery, and the unborn, often described by Francis as victims of the "throwaway culture."

And on the pope's second day in Canada, while visiting Lake Ste. Anne, the most popular pilgrimage site for Indigenous peoples in North America, the pope blessed Schmalz's latest, Mary, Untier of Knots, which will be permanently installed there.

The image, based on a popular Marian devotion and a baroque painting that captures Mary untying individual knots, has often been invoked by Francis in times of trouble and crisis and when divine help is needed to help undo difficult situations.

Schmalz told NCR that in his view, there's no better symbol for the current tightrope Pope Francis is walking in trying to right historical wrongs by apologizing to the Indigenous peoples in Canada for abuses at Catholic Church-run residential schools.

In Schmalz's bronze sculpture, Mary stands behind a globe, untying a chain of knots around the world.

"It's a portrait of his heart," Schmalz said, referring to Francis. "That is what he is doing, by traveling across the world to be here." 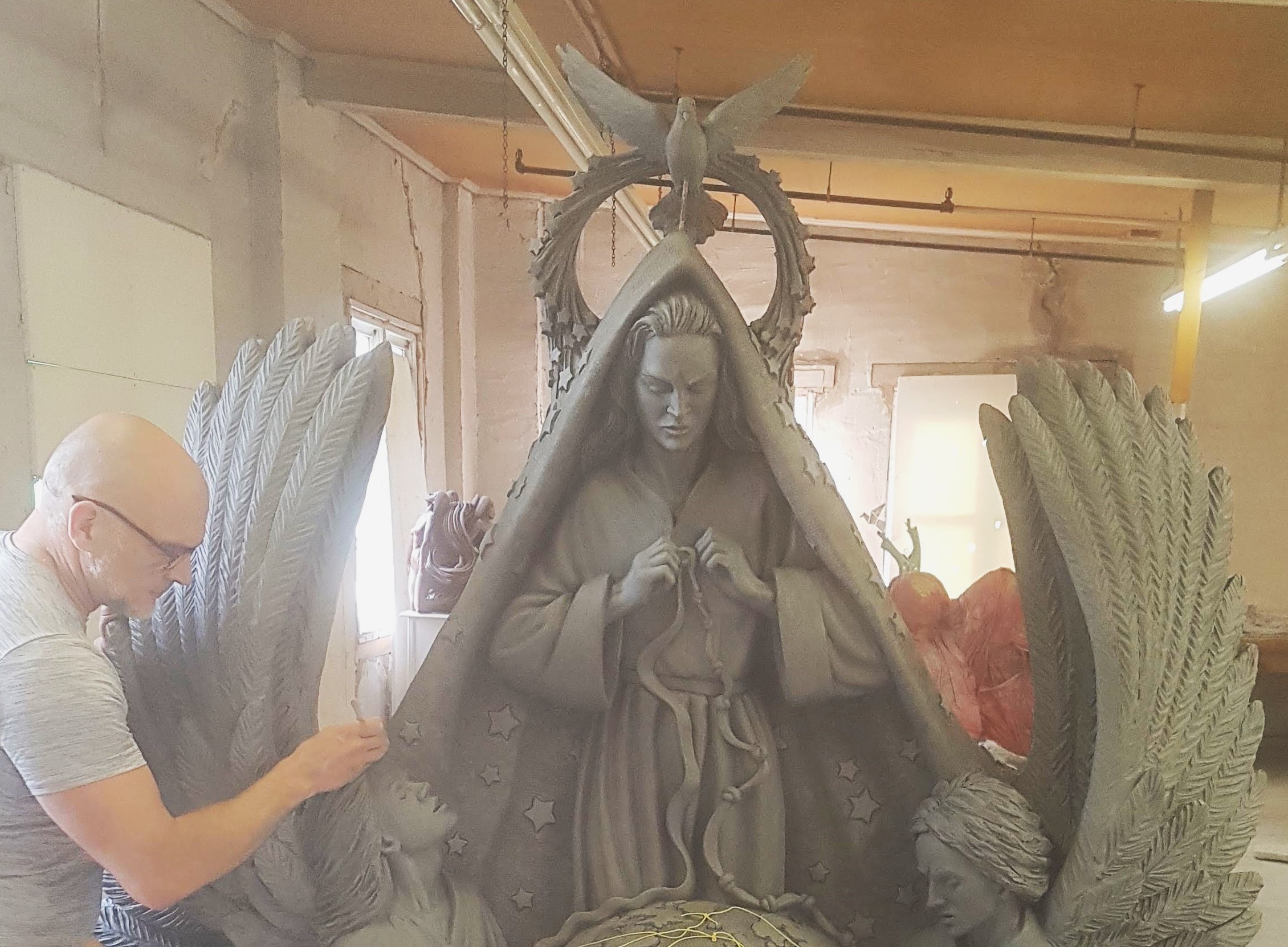 Timothy Schmalz works in his studio on the statue Mary, Untier of Knots. His 20-foot bronze Angels Unawares, which depicts migrants and refugees crammed aboard a boat as they flee, found a home in St. Peter's Square. (Courtesy of Timothy Schmalz)

The sculpture captures Mary not gazing outward, but looking — with furled brow — directly at the knots.

Schmalz says he sees it as a parallel for what the pope is doing in his weeklong tour here by "looking directly at the church's historical problems" and trying to right them.

"Everything about the piece is of frail, human imperfections and them having to be addressed and fixed," he added.

Francis, who left Canada July 29 to return to Rome, repeatedly said during his visit that the church's work of reconciliation with Indigenous peoples is only just beginning.

Schmalz said he hopes his sculpture will help in that process, saying that if the pope can apologize for the church's historical sins, so, too, can everyday Catholics in their own lives.

He hopes that when the sculpture is permanently installed, it will include real ribbons and real knots that individuals can undo as they journey to Lake Ste. Anne and pray.

"I feel like I am an artistic soldier for Pope Francis," Schmalz admitted. "And that's a great type of soldier to be. We need these symbols out there."