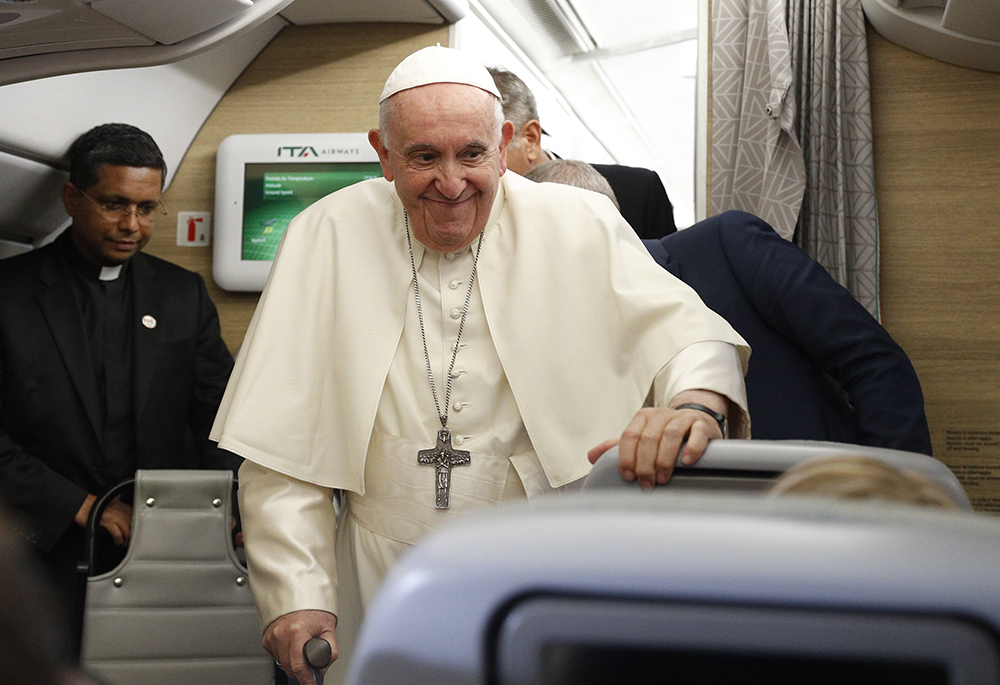 Pope Francis arrives to answer questions from journalists aboard his flight from Iqaluit, in the Canadian territory of Nunavut, to Rome July 29, 2022. (CNS/Paul Haring)

Pope Francis' six-day pastoral visit to Canada was a great success. It wasn't until the news conference on the plane back to Rome that it became clear he wasn't properly briefed for his visit.

Francis, in Canada on what he called a penitential pilgrimage, apologized to the Indigenous peoples of the country for the Catholic Church's cooperation in their forced assimilation to colonizing Europeans' culture over the centuries, especially in residential schools run by the church.

People from the First Nations, Métis and Inuit communities who listened to the pope's apologies responded for the most part positively. Many, however, regretted that it took so long for the pope to apologize, and some wanted him to say more.

Some Indigenous leaders wanted the pope to denounce the Doctrine of Discovery, a 15th-century theory enshrined in the papal bull, Inter Caetera, that allowed Christian nations to conquer and colonize "barbarous" nations in order to convert them to Christianity. At that time, Christians believed that those who were not baptized could not go to heaven.

The first question addressed to the pope on the plane returning to Rome was from an Indigenous reporter for CBC Radio, Jessica Ka'nhehsíio Deer.

"As a descendant of a residential school survivor, I know that survivors and their families want to see concrete actions following your apology, including the rejection of the 'Doctrine of Discovery,' " she said. "Considering that this is still enshrined in the Constitution and legal systems in Canada and the United States, where Indigenous peoples continue to be defrauded of their lands and deprived of power, was it not a missed opportunity to make a statement to this effect during your trip to Canada?"

The pope's response was shocking. "I didn't understand the second part of the question. Could you explain what you mean by Doctrine of Discovery?"

What? The pope does not know what the Doctrine of Discovery is? There isn't an excuse for this lapse.

How could the pope make a trip to Canada to apologize for the church's role in forced assimilation without knowing about the Doctrine of Discovery? Why was he not briefed on this?

Certainly, there are people in the Vatican, especially in the Secretariat of State, and among the Canadian hierarchy who know that this doctrine is of concern to the Indigenous leaders in Canada and elsewhere. How could they let the pope go to Canada without a thorough briefing on this topic? If he had been briefed, he probably would have been happy to reject it.

Somebody dropped the ball.

True, this was not the most important issue of the trip. What the Indigenous people wanted was an apology for what happened in the residential schools and the church's role in forced assimilation. Of the 50,000 people who attended his Mass in Edmonton, probably fewer than 1,000 knew about the doctrine. But this is an issue of great concern to Indigenous leaders and scholars. The pope should not have been caught flat-footed by a question from a journalist.

The issue has been well covered by the press. Using the search function at the Religion News Service website, I found 390 results mentioning the Doctrine of Discovery just since 2020. Catholic publications like the National Catholic Reporter and America, published by the Jesuits, have also discussed it thoroughly.

Indeed, at the United Nations Ninth Session of the Permanent Forum on Indigenous Issues in April 2010, the Vatican said that the doctrine had been abrogated as early as 1494 and that "circumstances have changed so much that to attribute any juridical value to such a document seems completely out of place."

In short, the Vatican said, "The Holy See confirms that Inter Caetera has already been abrogated and considers it without any legal or doctrinal value." 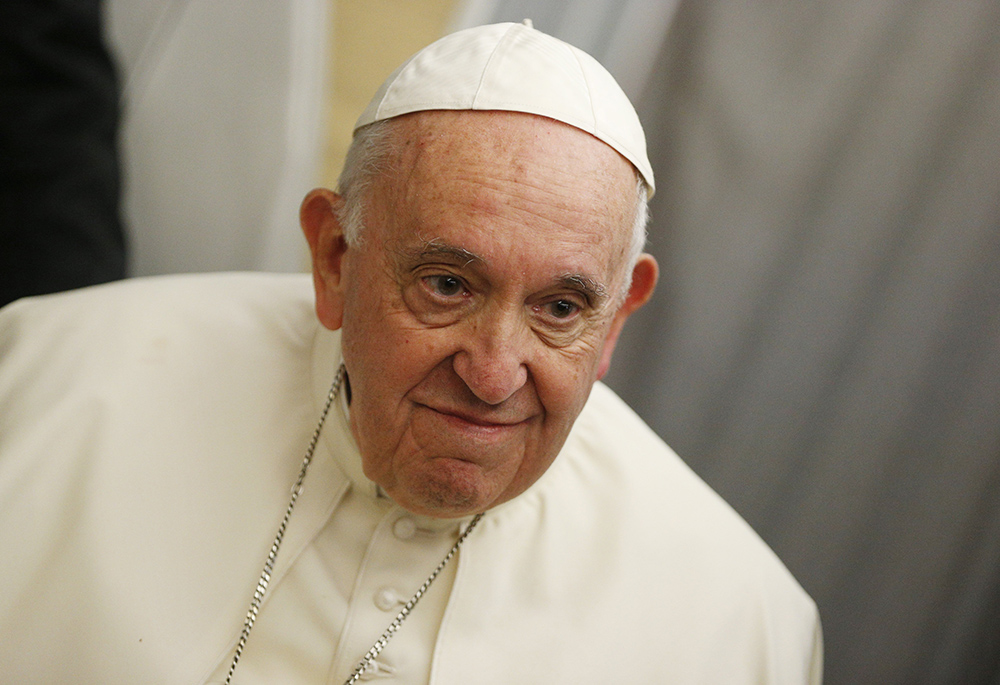 Pope Francis looks on as he answers questions from journalists aboard his flight from Iqaluit, in the Canadian territory of Nunavut, to Rome July 29. (CNS/Paul Haring)

When reporters ask the Vatican about the doctrine, they get a similar response and are told that the topic is under study. The pope should have been prepped on what the Vatican has been saying so he could have at least said the same.

Vatican officials should have known that this question was coming, and they should have prepared the pope to respond. Instead, he was left looking like a student who had not done his homework.

The pope's response to a second question was also embarrassing. Here the pope was asked about genocide.

"The people who heard your words of apology this past week expressed their disappointment because the word 'genocide' was not used," said Brittany Hobson of The Canadian Press. "Would you use that term to say that members of the church participated in genocide?"

Here the pope quickly embraced the idea. "It is true," he said. But then he added, "I didn't use the word because it didn't come to my mind."

What? None of his advisers suggested that he might refer to what happened to the Indigenous peoples of Canada as "genocide"? You got to be kidding. The Canadian Truth and Reconciliation Commission described the residential school system as genocide, so this is nothing new.

If one of the pope's speechwriters had suggested using the term "genocide," it is clear from the pope's response that he would have included it in his speeches.

Again, someone dropped the ball.

The pope's responses on the plane back to Rome are beyond embarrassing; they are scandalous. The pope needs better staffing or people will begin to think that perhaps he is no longer up to the job.