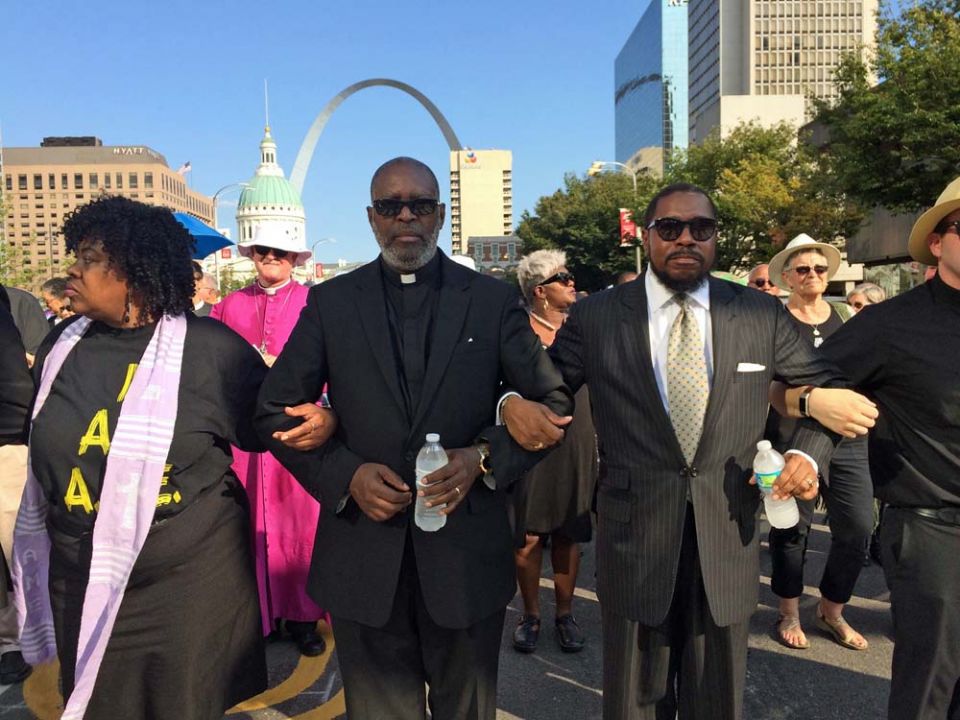 Story updated at 11 a.m. CDT, Sept. 20, to include reporting from the Sept. 19 interfaith prayer service and march to City Hall.

ST. LOUIS —  Archbishop Robert Carlson led an interfaith prayer service for "peace and solidarity" this afternoon, Sept. 19, in St. Louis, a city on edge from the acquittal of a white police officer who was charged with first-degree murder in the shooting death of a black man in 2011.

He was joined by nearly a dozen other faith leaders who prayed and spoke before a crowd of hundreds on a sweltering day in downtown's Kiener Plaza Park, blocks away from the St. Louis Circuit Courts building where veteran Circuit Judge Timothy Wilson issued a ruling in the case Friday, Sept. 15. In a 30-page decision, he acquitted former St. Louis Police Officer Jason Stockley of first-degree murder in the shooting death of Anthony Lamar Smith. Prosecutors had argued Stockley planted a gun in the victim's vehicle, and a video shows the officer threatening to kill Smith. But Wilson said the evidence was not sufficient to find Stockley guilty.

"We want to remember, affirm and hope that we are not a divided people, but one human family," said Carlson, who had organized the event. "We must affirm that peace is not an unrealistic dream. Our affirmation of peace is a public commitment to justice."

The Rev. Dr. Linden Bowie, president of the Missionary Baptist State Convention of Missouri, who had sought Catholic leaders' support in the days leading up to the verdict, thanked Carlson for his leadership, and announced that "we'll march to City Hall in the name of solidarity, not just praying together but moving together." 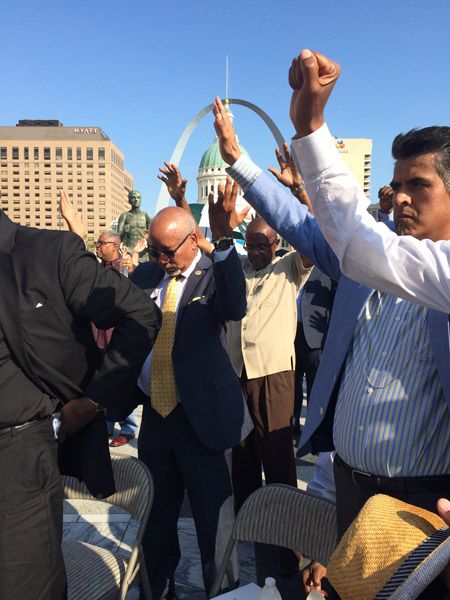 Speaker after speaker, from the African Methodist Episcopal Church, the Episcopal Diocese, the Islamic Foundation of Greater St. Louis, the Congregation Shaare Emeth and St. Louis Rabbinical Association, Jesuits and other faith leaders, drew on Scripture, the Quran, and the Torah to show how they inform human struggle and deliverance, and action for justice.

"It says justice you shall pursue; it does not say you should wait for it," said Rabbi James Bennett of Congregation Shaare Emeth. "Jews are about to enter the high holy days, a time of reflection, accountability and repentance. For the sin we have committed, the injustice we support, for our inaction, grant us atonement."

Weeks before the verdict, on Aug. 28, a coalition of black ministers and supporters both black and white pledged in a news conference to disrupt life in St. Louis, with one black minister saying "If you kill our kids, we will kill your economy."

The Right Reverend George Wayne Smith, bishop of the Episcopal Diocese of Missouri, spoke to that sentiment, telling the crowd, "We are witness to a people raging with anger."

"Some of us want to say, 'it's not our fault,' " he said. "The idol of racism makes life easier for some of us and unbearable for others."

Largely peaceful and organized protests since the Sept. 15 verdict have devolved into nighttime violence and property damage to businesses and shops, the St. Louis Public Library, even Mayor Lyda Krewson's home in the city's toney Central West End neighborhood. The Saint Louis Symphony cancelled a performance, and U2 and Ed Sheeran cancelled their weekend concerts. Police are working 12-hour shifts to control nighttime crowds that emerge after the peaceful protests have ended for the day.

Protests have been staged daily, either in the downtown area, the Central West End, the western suburbs, or in the entertainment district of suburban University City, where rock legend Chuck Berry performed monthly well into his 80s. 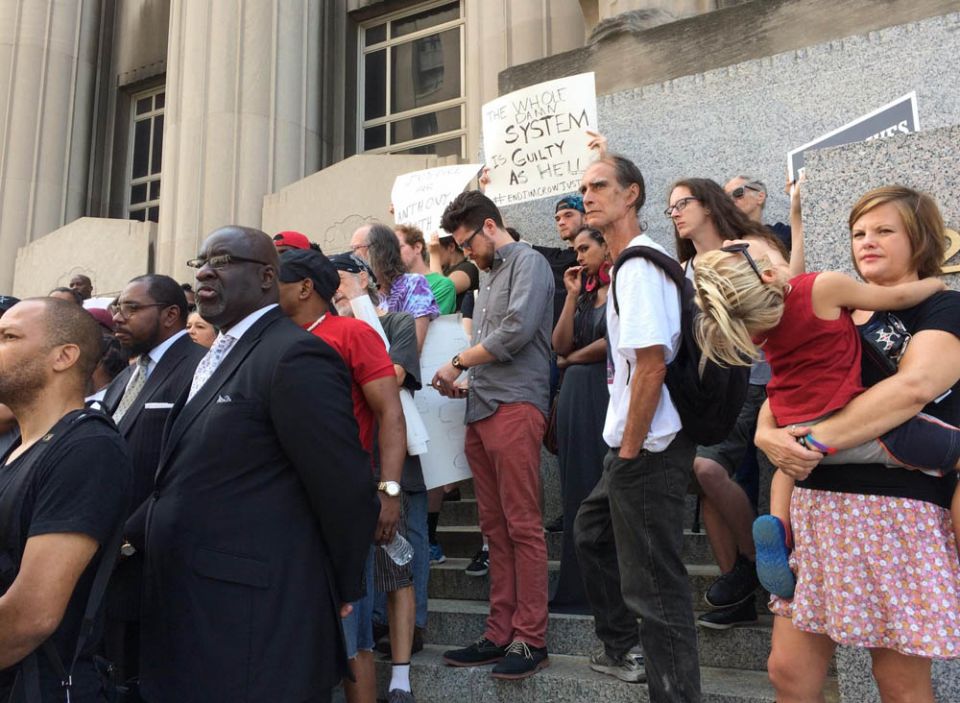 After the Sept. 19 prayer service, faith leaders, their arms locked in solidarity, led a march of several hundred followers to City Hall. Once they arrived, participants were asked to raise their arms, and keep them raised for six minutes — one minute for each of the six years that elapsed between the shooting death in 2011 and a verdict in 2017.

Bowie said the disruption — which is already having an economic impact — will continue until justice is attained. A community whose image was already tarnished in the Michael Brown shooting in suburban Ferguson in 2014 can't seem to shake its race problem.

"The reason I have my job is because of kids in the streets," said attorney Marie Kenyon, who directs the archdiocese's two-year-old Peace and Justice Commission. In May 2015, Carlson appointed 27 people to the commission that include laypersons, clergy, religious sisters, attorneys, educators and police.

Kenyon said Ferguson was a wake-up call to the region, and although the church has always worked in the community, church leaders knew they had to pay attention to factors that caused the uprising after Brown's death. "We're working on a lot of things," including racial equity, she said. "We're leaders in the community who happen to be Catholics."

She said the choice to hold the Sept. 19 interfaith prayer service at Kiener Plaza Park, rather than in a worship space, was strategic. The message of peace and solidarity can be delivered more broadly. 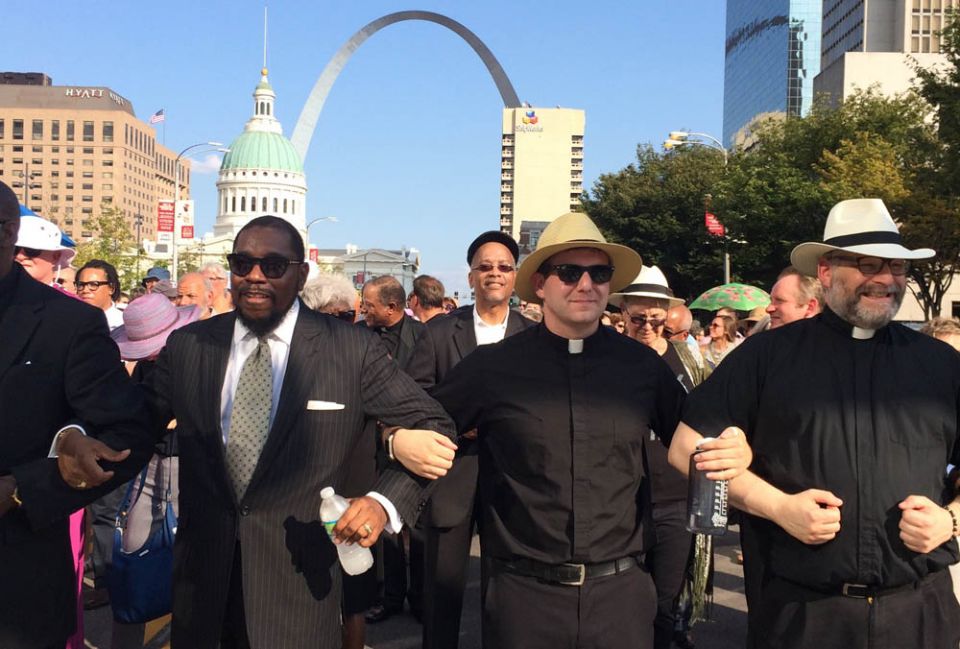 Kiener Plaza Park is within view of one of the city's most famous landmarks, the Old Courthouse, where slaves were auctioned in the 1860s, and where slave Dred Scott and his wife sued for their freedom, but later lost in the U.S. Supreme Court.

Carlson called for peace in the moments after the Stockley verdict.

"If we want peace and justice," the statement said, "we must come together a community through prayer, mutual understanding and forgiveness. While acknowledging the hurt and anger, we must not fuel the fires of hatred and division. We must ask God for peace in our own hearts and share it with those around us. Violence does not lead to peace and justice – they are opposing forces and cannot co-exist. I implore each of you to choose peace! Reject the false and empty hope that violence will solve problems. Violence only creates more violence. We must work together for a better, stronger, safer community, one founded upon respect for each other, and one in which we see our neighbor as another self."

On Sept. 15, several parishes in the archdiocese offered opportunities for prayer and conversation about the verdict, and St. Francis Xavier "College Church" on the campus of Saint Louis University in midtown St. Louis extended an invitation for people to join in its Sunday evening vigil on the steps of the church, which it has been hosting for years.

The college church also offered opportunities for people to join small-group social-justice readings and for white people to engage their children in potentially uncomfortable conversations about race. 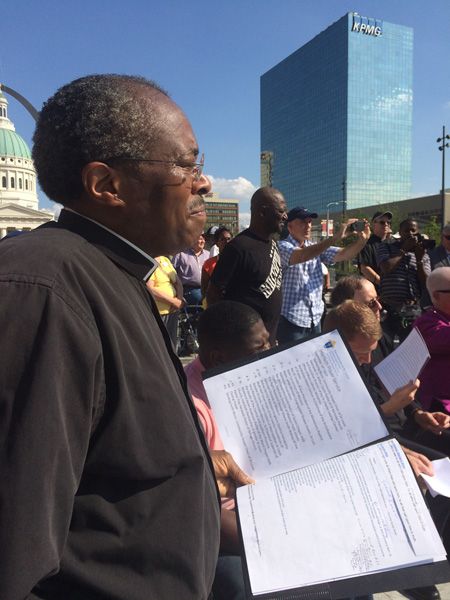 Fr. Art Cavitt, the African-American pastor of St. Nicholas Parish downtown, who also is executive director of the St. Charles Lwanga Center of black ministries, emceed the event. He said the death of Michael Brown in Ferguson and the verdict brought out sores that have been festering for a long time. He said they pushed buttons that caused some people to pull the grenade pin. He doesn't endorse the violence and property damage.

"This is long and difficult and very tiring," he said. "They want it to be over. They don't like the long hours and they want to get back to normal operations.

"I pray with them that all officers remain safe, that no one gets hurt."

[Cheryl Wittenauer is a freelance writer based in St. Louis.]