Be inspired to vote, learn about voting rights with 'All In' 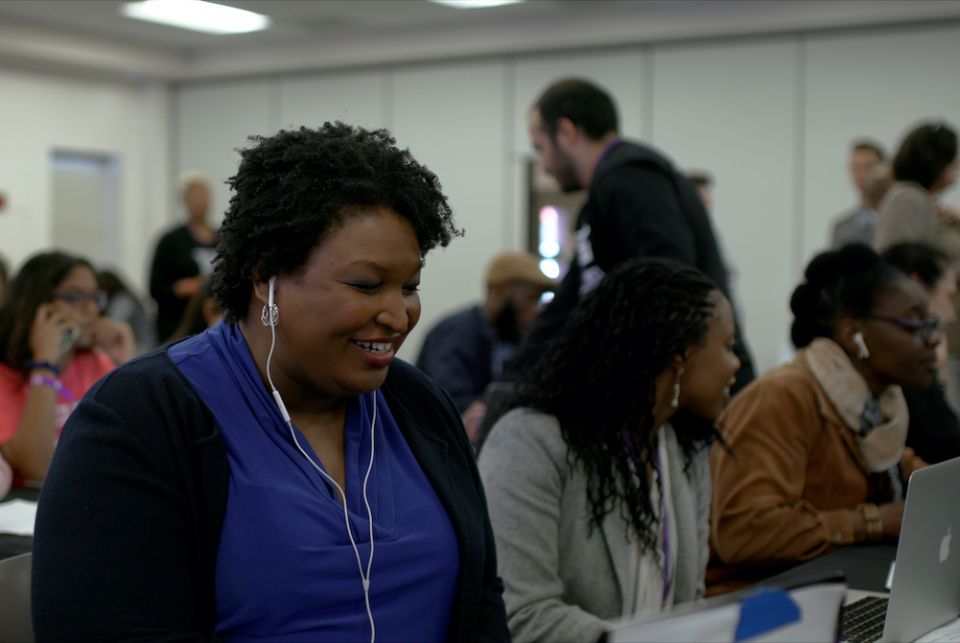 Stacey Abrams works a phone bank in "All In: The Fight for Democracy." (Amazon Studios)

The most frightening film of 2020 is Amazon's "All In: The Fight for Democracy."

In this documentary, Stacey Abrams, 2018 Democratic candidate for governor of Georgia, acts as our guide to tell the shameful history of voter suppression in the United States — but most disturbing, it reveals ongoing voter suppression for African Americans primarily, but also for Hispanics, Native Americans, Asian Americans, the poor, and college students.

How is this happening?

Most recently, in 2013's Shelby County v. Holder, the Supreme Court gutted the heart of the Voting Rights Act of 1965 by declaring unconstitutional the part that required 16 states, with practices of racial discrimination that prevented access to voting to all citizens, to obtain federal pre-clearance before redistricting. The film notes that Chief Justice John G. Roberts cast the tie-breaking vote. He had been a law clerk for former Chief Justice William Rehnquist, who as a lawyer in the 1960s participated in an Arizona effort to challenge voters in minority Democratic districts with literacy tests and to ensure voters were U.S. citizens.

The film looks at new efforts emerging in several states, including Kansas and Wisconsin, to suppress voting. The film asserts and makes a case that it's easier to win an election when fewer people vote. The means for voter suppression include gerrymandering, mandatory voter identification, closing precincts, and roll purging. In North Dakota, voters must have an ID with a street address, but Native Americans living on reservations use post office boxes. They must petition state and federal offices to obtain a street address, which seems to be an ordeal most people are not willing to undertake.

There is one success story. In Florida, in 2014, citizens voted to allow convicted felons who had served their sentences to be allowed to vote. Because no legislator would take on this initiative, a grassroots effort got the issue on the ballot, and it passed by a wide margin. Now about 1.4 million more people in Florida have the right to vote. The United States is the only country in the world where people who have repaid their debt to society are not returned automatically to full citizenship when they complete their prison terms.

In Abrams' case, when election day came in Georgia, there were fewer polling places, and some voting machines were not working. People were forced to stand in line for hours to vote. She did not concede the race to her opponent Brian Kemp. She dropped out after filing numerous lawsuits to have provisional and mail-in ballots counted in order to reach the numbers needed for a recount, as the race was so close. Most egregious of all was the fact that Kemp was the state official in charge of the state election process that had cut the number of polling places, purged names from voter rolls without notifying people, failed to provide for training for poll volunteers, and so forth.

Going back to the election of George Washington as president in 1789 by white male property owners (about 6% of the population then), the film moves ahead to Reconstruction after the Civil War when freed Black slaves were given the right to vote and be elected to office. But then Jim Crow laws spread across the South, including a poll tax, which was a burden on the poor because it meant that people had to choose between feeding their children or paying to vote; a literacy test; and a requirement that the voter's grandfather had to have been a landowner, which was impossible for former slaves. The Voting Rights Act of 1965, signed by President Lyndon B. Johnson, that was subsequently renewed by succeeding presidents, repealed these state laws and dealt with redistricting as well. The documentary also revisits women's suffrage and the role of African American women in the movement.

All In historic footage cc.jpg

Historic footage used in "All In: The Fight for Democracy" (Amazon Studios)

The filmmakers have social justice projects in their resumes. The documentary is directed by Lisa Cortes, an executive producer for "Precious," and Liz Garbus, who produced "The Innocence Files" on Netflix. It was written by Jack Youngelson, who also wrote "The Ghosts of Abu Ghraib."

"All In: The Fight for Democracy" tells a chilling story that wants to motivate citizens to use our voices and vote, because when we do not vote, we lose our voice. At the end of the film, viewers are encouraged to make sure they are registered to vote now, ahead of Election Day, to save receipts from registering and voting, to make sure registration is current and valid, to know their states voting requirements and obtain the necessary ID — especially students.

I really liked how Abrams' intelligence and her natural steady and serene personality are shown throughout the film, in scenes from her student days on through to her running for governor. She grew up poor, but her parents made sure her family served others. "Having nothing," they told her and her sister, "is not an excuse for doing nothing." From a young age, they took Abrams with them to vote.

Some scenes in the film are animated, such as when Abrams tells the story of visiting her grandmother who told her about the first time she went to vote in the 1960s. Her grandmother was terrified, thinking there would be police with batons and dogs. But she went anyway and never missed an opportunity to vote as long as she lived.

Abrams also recalls that as high school class valedictorian, she and her parents were invited to the governor's mansion in Atlanta. They did not have a car, so they took the bus. The guard at the gate saw them coming and told them they did not belong there. He would not even look at the list of guests in his hands. Finally, her father convinced the guard (it is not clear how) to let them in to meet the governor. It is the only part of that day that Abrams remembers.

Seeing "All In: The Fight for Democracy" will be an hour and a half well spent. It is a clear, honest clarion call to work for justice through non-violent means: voting.

ALL IN: The Fight For Democracy – Official Trailer | Prime Video

Trailer for "All In: The Fight for Democracy" (YouTube/Amazon Prime Video)

Culture | Be inspired to vote, learn about voting rights with 'All In'