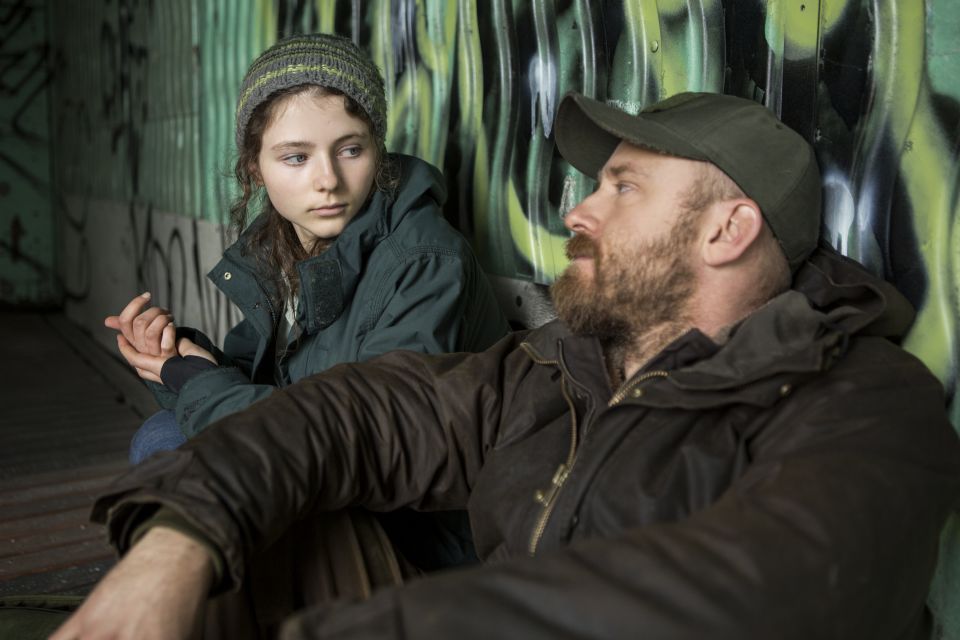 This past week I screened three films, now in theaters, about the relationships between fathers and daughters. Two are smaller, independent films that have great artistic power, and one is a summer action thriller that is proficient on all levels, but goes for box office receipts and brutality over a good script and a chance to probe the depths and mysteries of the human heart. It's grace over grit.

What's noticeable about these three films is that mothers are absent, and that the bonds between fathers and daughters can be strong and loving. The violence in "Leave No Trace" plays in the background; we imagine it as we witness Will's distress and try to read the tattoos on his body. The violence in "Hearts Beat Loud" is that of an accident that took the life of a mother in an aging, urban neighborhood. The violence in "Sicario: Day of the Soldado" is pervasive, destroys families and is pandered to us as fear-mongering entertainment.

In "Leave No Trace," Tom (Thomasin McKenzie) is an adolescent girl who lives off the grid with her military veteran father Will (Ben Foster) in a state park in Oregon. Will teaches his daughter how to live off the land and homeschools her. For cash, Will goes to the veterans' hospital for prescriptions for his post-traumatic stress disorder-induced nightmares and other issues and sells them for cash to other vets living in a nearby camp. Tom's mother seems to have died.

Although they carry out escape drills should authorities discover them, Tom and Will are eventually seen, reported and tracked down by dogs. Although social workers try to be kind, they only want to normalize Tom and Will. A man (Jeff Kober) who owns a Christmas tree farm reads about the pair in the newspaper and offers them a home and work for Will. Social worker Jean (Dana Millican) brings them to a trailer on the property where they live for a while.

Eventually it becomes too much for Will, and they strike out again, this time hitchhiking to Washington state. When Will is injured going for supplies, people from a veterans' RV commune take them in. This is when the film takes on a sense of ineffable human kindness as they experience unconditional caring and generosity from this community that lives on the margins of society. The woman who owns the camp shows Tom where she has hung a bag of groceries every week for decades for a hermit veteran who cannot handle society. She has never seen him or met him. Another woman shows Tom the beehives she cares for, and Tom, in an almost mystical moment, shows her dad how he does not have to be afraid of bees.

At first, Tom, played exquisitely by McKenzie, follows her father like a shadow, but little by little, as she meets new people and discovers a life beyond the forest, she becomes her own person. She begins to resist the cold, rain and discomfort of constant moving. Will is a good man and father, but unable to integrate the trappings and requirements of social living and rules with his instinct for survival. Foster is completely believable as a father giving every inch of his life for his daughter in the best way he can.

This very gentle film was co-written with Anne Rosellini and directed by Debra Granik who gave us "Winter's Bone." "Leave No Trace" is almost perfect. It draws tight the ties that bind father and daughter while showing the brittle fragility of those ties that connect broken spirits with sanity. Benevolent people populate the film. The horror of war that a government inflicts on its own citizens generation after generation in the name of patriotism overshadows everything. If awards were being given today, this would get my vote for best film, actors, the whole ballot.

In "Hearts Beat Loud," Sam (Kiersey Clemons) is taking a class on the anatomy of the heart as she prepares to leave her Brooklyn home and her dad, Frank (Nick Offerman), to study pre-med at UCLA. Frank, whose mom, Marianne (Blythe Danner), is a shoplifting grandmother, decides to close his vintage vinyl record shop after 17 years. The landlord, Leslie (Toni Collette), likes Frank and wants to help him keep the shop open. Frank confers with his pal Dave (Ted Danson), a lush who owns a bar, but neither Leslie or Dave is able to come up with what Frank needs to stay in business. 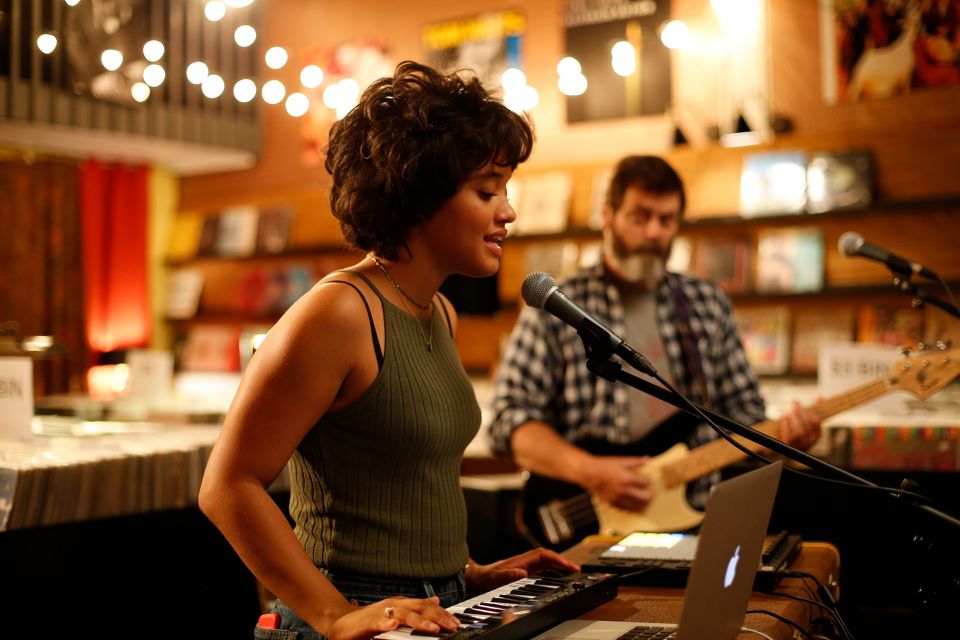 Sam's mom, an African-American singer and musician, was killed in a bike accident when Sam was very young. Frank has raised a strong, talented daughter who knows her own mind — and is very musical. Although father and daughter don't communicate very well, Sam shares a song she has written and Frank jams with her, as they had done often over the years. It's a love song, as Sam has recently fallen for an artist, Rose (Sasha Lane). They record the song, and when Frank wants to publish it, Sam is annoyed and says, "We're not a band." Frank uses this as the title of their band, uploads the song online and soon a record label executive comes calling. All of a sudden, Frank and Sam have an unexpected decision to make.

Filmed on location in Red Hook, Brooklyn, and New York City, there is a nostalgic feel to "Hearts Beat Loud" and a gentle feel of impending change. The hearts beating the loudest are between father and daughter as the day for Sam's departure draws near. Brett Haley and Marc Basch (the same team who gave us "The Hero" last year) wrote the script, which Haley directed. There is a feel-good quality to the film punctuated by good music and an ending that is reminiscent of a 1950s film. The camera loves Offerman's expressive eyes and Sam's beautiful, determined face. This is a coming-of-age film for dads as much as it is for daughters.

"Sicario: Day of the Soldado" is a kind-of sequel to the 2015 U.S. war on Mexican drug cartel franchise that began with the film "Sicario." The main cast is back, but without Emily Blunt (who must have been busy remaking "Mary Poppins"), and with Italian director Stefano Sollima (known for the raw "Gomorrah" television series) replacing French-Canadian director Denis Villeneuve. Taylor Sheridan penned both scripts. I found the inner logic of the first difficult to follow, and the second upholds the franchise's tradition of a wild, confusing celebration of brute force and violence within the context of the war on drugs, with a touch of terrorism. 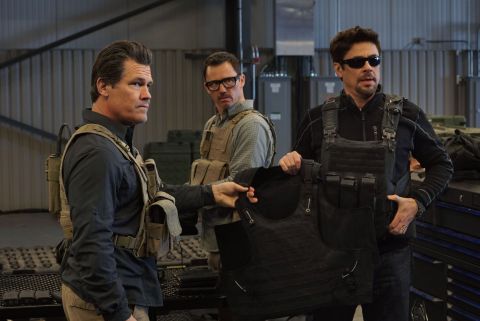 Josh Brolin, Jeffrey Donovan and Benicio Del Toro star in a scene from the movie "Sicario: Day of the Soldado." (CNS photo/Lionsgate)

Let's start with the title: Sicario (hitman): Day of the Soldado (soldier.) About which hitman and which soldier is this film speaking?

The film opens with CIA operative Matt Graver (Josh Brolin) interrogating a Somali pirate about how Middle Eastern terrorists made it to Mexico without the benefit of an airline. After bombing out his entire family in front of him (using drone optics), the pirate confesses. Cynthia (Catherine Keener) brings in Graver to see James Riley (a ghostly-looking Matthew Modine), secretary of defense. Graver is given carte blanche to whatever millions he needs to start a war between the Mexican cartels and frustrate, one supposes, the flow of terrorists by sea through Mexican ports.

Graver contacts Alejandro (Benicio del Toro), the lawyer whose wife and hearing-impaired young daughter one of the cartels killed and whose desire for revenge drove the first film. They agree that the best way to start this war between cartels is to kidnap Isabela Reyes (Isabela Moner), the 16 year-old daughter of cartel kingpin Signor Reyes (whom we never see), but return her safely after whatever is going to happen.

The extraction backfires, there are no secrets in Mexico, the U.S. abandons the operation and Isabela must die to cover up U.S. military involvement.

Suddenly, Alejandro, who is guarding Isabela, turns into a gentle giant. He truly protects her and refuses to kill her; he is determined to bring her back to the U.S. safely. Much fighting, shooting, killing, several helicopters and recriminations ensue. Alejandro in this mode is the father-hero.

There is another storyline to mention. Back at the beginning, a human smuggler, also known as a "coyote," brings his nephew in El Paso, Texas, into the migrant trafficking trade. At the end, it all comes together in a totally incomprehensible way, other than it must be a set up for the next Sicario movie.

While Del Toro plays a good father figure, and Moner a formidable teenager who weathers danger as the daughter of a cartel leader would, their relationship, while a brief calm in the middle of chaos, doesn't make sense in the overall story. So enjoy it while you can.

I might add that this film shows how easy it would be for terrorists to come to the U.S. via Mexico and supports the current administration's fears about everything Mexican. There is no sexual violence in the film; there is only the disregard of human life (except for white people) and the use of violence to get what you want. But then you end up with Del Toro's Alejandro again. Oh, I don't know. See it if you want to.