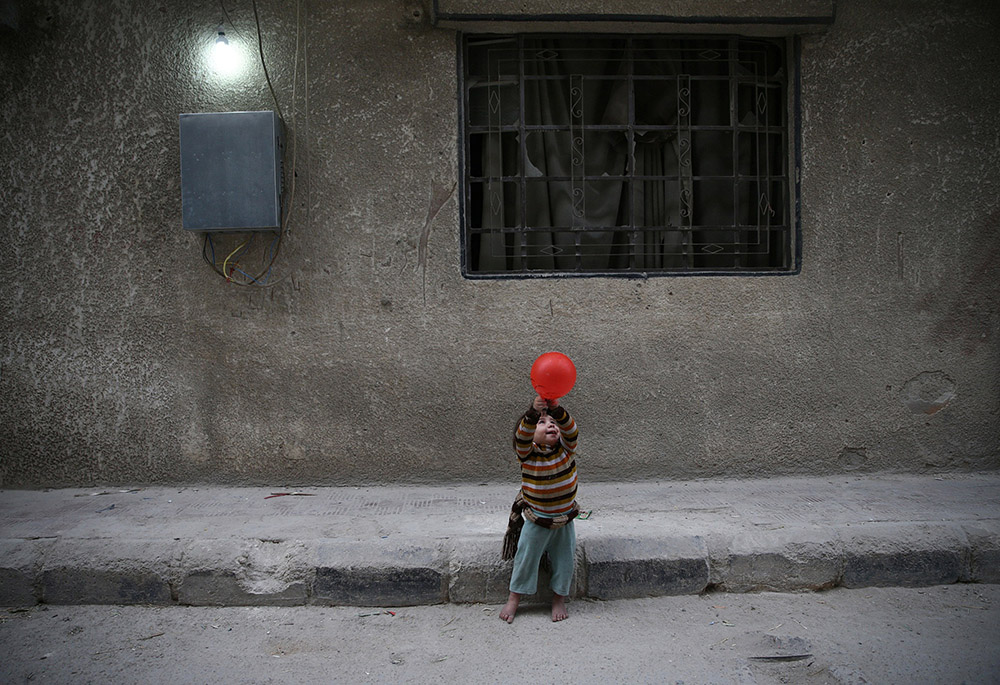 A child plays with a balloon Nov. 13, 2016, in Douma, Syria. In previous years, sanctions by the United States denied industrial parts to Syria and crippled its airline industry. (CNS/Reuters/Bassam Khabieh)

The spiritual scorecards of the last month are, at best, distressing.

The virus is still here while some of the population refuses to get vaccinated for the sake of the rest of the country if not for themselves. One politician stands between the stability of middle-class families and the education of their children. Polarization remains the name of the current American Congressional game. (Who's winning, who knows?) Democracy teeters on its edges as it twists back and forth.

So what is the Christian answer to all of that?

If we're poor of spirit, we're supposed to accept life as it? Answer: No.

If the circumstances of life are difficult for us, we're meant to welcome its sadness and go on anyway? Answer: No.

If a system is unjust, we're required to make the best of it? Answer: No.

Or, if people are undermining the pillars of society, we're supposed to be merciful to them and forget it's happening? Answer: "Blessed are the merciful," the fifth beatitude contends, "for they shall receive mercy."

For those for whom that fifth beatitude is seen as a kind of recess, a relief, a break from the rest of Jesus' concerns about hunger, righteousness, meekness, mourning, poverty of spirit — all of them somehow entwined with justice — hold it. Not so fast. The question is, what do we have here, a confused Jesus? A confused you? Or a bad case of holy inconsistency?

Is mercy really meant to be a mitigation of justice?

The moral problem is a serious one and, as a matter of fact, is plaguing this society at this time in its development in frightening new forms. Ever since the United States invented one-easy-way-to-hold-the-global-village-captive to nuclear bombs, the whole question of justice has become fogged. Now what does the world do to bring evil to heel when, clearly, nuclear attacks are not an answer to global tax fraud, for instance, or underground cyberattacks, possibly?

Or even less certain, when a country's only major export is held up by international sanctions and its citizenry reduced to poverty as a result, how just is that? Syria, for instance, was denied industrial parts by the United States that crippled its airline industry. What would seem to have been a very targeted response to civil corruption created a ripple effect that touched the economy of the entire country. And the dictator that set off that silent attack is still in power, and the people are still poor.

Related: Happy are those who hunger and thirst for righteousness — for they shall boil over

In our own situation, the failure of China to produce more automobile chips is now affecting our own capacity to produce cars and so protect the automobile industry here, as well as raising prices for workers who can't get to work without a personal vehicle.

What happens to justice when mercy takes over has never been meant to be anarchy or destitution, or economic collapse, or regional destruction. And so?

Then the fifth beatitude, mercy, raises major political, civil and moral issues. Is mercy a function of politics at all? Is mercy a civil obligation that overrules the civil law? Is mercy a pillar of society — and who says so?

The kind of mercy we give, Jesus says, will be the kind of mercy we get when we need it. Which means that mercy is clearly not an event; mercy is a way of being in the world. It is the ability to identify with the sufferings of another and then accompany them while they struggle with them.

Mercy is not so much some kind of quickly compassionate act for another as it is the foundation of an ongoing relationship — if not with this one particular person as it is with the many caught in the same darkness. It is not so much a commitment to law as it is coming to understand the struggles of the other.

Most of all, mercy is the beginning of a movement of the soul. To become merciful, we must first become aware of injustice and how it happens. It is beginning to see what we have failed to understand before: that the frequency of gun violence in the bowels of the city, for instance, comes from the lack of all manner of life's needs there.

The second step of mercy is a call for justice by the just, by those who have failed to see for centuries now that justice is often the most unjust system of them all. On the other hand, the percentage of minorities incarcerated for life while the wealthy had lawyers who got them deals are clear signs of our own failure to see the difference.

The third dimension of mercy lies in its commitment to compensation for the injured who have been left behind by society for generations as well as support for those whose social rank serves them well.

The fourth criteria of genuine mercy is the acceptance of those whose lives do not match our own for status and dignity, for education and ability and bright, shiny couth.

From where I stand, the polarization of the dignified and urbane from the average and the suffering is greater than ever. In the 1960s, we could hear the heartbeat of equality beating under our feet as it rose up to claim its place one generation after another. Now over 50 years later, what we hear is the slamming of solid doors against those others we never expected to see on our side of town.

It is the Beatitudes that call us beyond ourselves to the best of ourselves. But until the leadership of the country does the same thing, it will be unconscionably too long until "mercy" becomes the icon of the land again. Let us pray.

Read this next: Happy are peacemakers who wake up the rest of us
A version of this story appeared in the March 4-17, 2022 print issue under the headline: Blessed are the merciful — for our sakes.