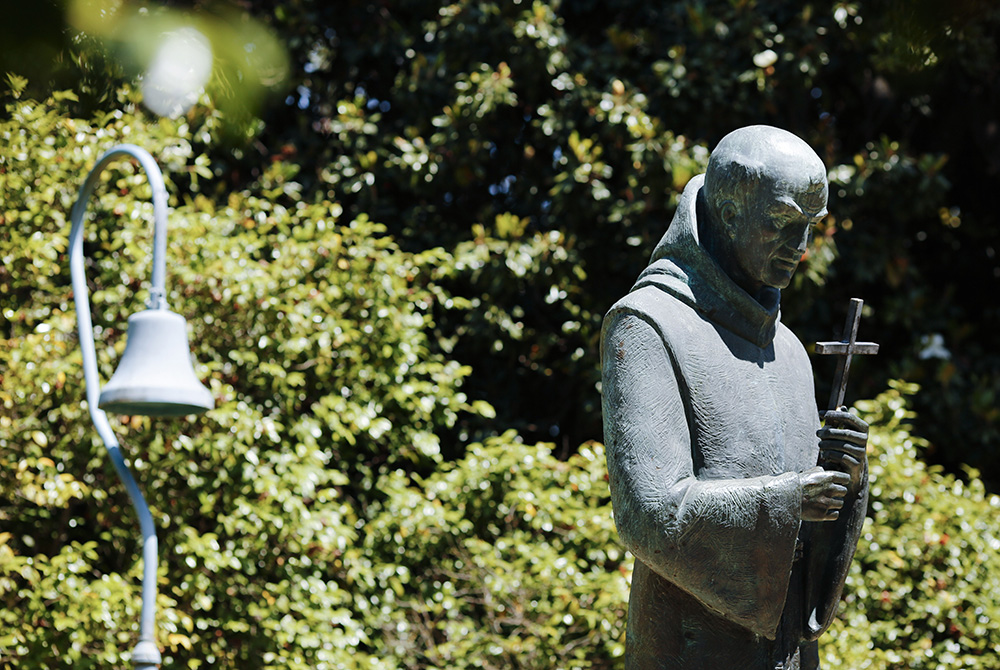 A statue of St. Junipero Serra in Sacramento, California, is seen in this 2015 file photo. It was torn down by a group of demonstrators late July 4, 2020. (CNS/Nancy Wiechec)

Junipero Serra, a Franciscan priest canonized by Pope Francis in 2015, has become the center of a firestorm in California, where he was a Spanish missionary for 15 years beginning in 1768.

Catholic bishops portray him as a holy man who brought Christianity to California's Indigenous people, while Indigenous activists see him as an instrument of the Spanish Empire that brought destruction and death to Indigenous peoples.

His statues have been vandalized, and some politicians are treating him like a Confederate general — removing his name and statues from public spaces and replacing them with monuments to Native Americans.

Last year, in San Rafael, five protesters were arrested after his statue was torn down from the grounds of a mission on Indigenous Peoples Day. His statue has also been attacked in San Francisco and Sacramento.

Bishops defend Serra and have labeled these attacks as anti-Catholic. Archbishop Salvatore Cordileone of San Francisco called on the district attorney to "press charges to the full extent of the law." He urged the vandals be charged with a hate crime.

I think the California bishops should pause, take a breath and ask, "What would Serra do?"

Judged by contemporary standards, Serra clearly does not reflect the ideal standards of missionary activity today. This is why I thought his canonization a mistake.

Although considered a good man in his time — whose motivations revealed in his writings appear loving — he is no model for modern missionaries. He, like other Europeans, viewed the Indigenous peoples of California through a paternalistic lens. They saw the people they were to convert as living in a state of "natural infancy," saw their mission as turning them into citizens of the empire as much as of the kingdom of God.

As Serra biographer Robert Senkewicz explained to me in a 2015 interview for the National Catholic Reporter, "That meant learning European-style agriculture, becoming a Catholic, and living in a congregated pueblo-type arrangement, just like people in Spain."

Serra believed that if the California Indigenous experienced living in a Christian community they would find it so attractive they would readily embrace the faith. And because he saw them as children, he did not respect their autonomy. Once they joined, they could not leave.

In truth, the Indigenous people had few alternatives to the missions. "The presence of the Spanish colonial enterprise very quickly rendered it almost impossible for the traditional Indigenous ways of life to be maintained," explained Senkewicz. Spanish cattle destroyed the acorns, berries and plants the Indigenous ate and chased off the game they had hunted. Without the missions, they would have starved.

In the missions, some locals learned how to farm and be cowboys. They learned from Mexican craftsmen and became blacksmiths and carpenters, skills they passed on to their children.

What Serra did not understand, because of the age's ignorance of germ theory, was that bringing together Indigenous people would expose them to diseases for which they had no immunity, resulting in thousands of deaths.

His defenders note that Spain was going to invade California with or without the missionaries. The missionaries, they argue, tried to protect the Indigenous from Spanish soldiers and settlers. Serra was constantly writing Mexico with complaints about the local governor. Later American policies toward the California Indigenous were much harsher than those of the Spanish.

There is evidence that some California Indigenous liked Serra, whom they referred to as Padre Viejo, the old priest. "I think some of them sort of adopted him almost as a mascot," said Senkewicz.

But others revolted against the mission system.

In 1775, there was a rebellion in San Diego that destroyed the mission and killed one of the priests. This episode led Serra to write to the viceroy and ask that, if he were to be killed by a Native American, that person not be executed but forgiven.

Would he object if his statues were replaced by monuments to the California Indigenous he loved and to whom he dedicated his life? I think not. Senkewicz believes Serra would say, "The story of the California missions should not be about me, it should be about the Indigenous people."

So, the real question the California bishops should ask is, "What would Serra do?"

Related: Junipero Serra: saint or not?