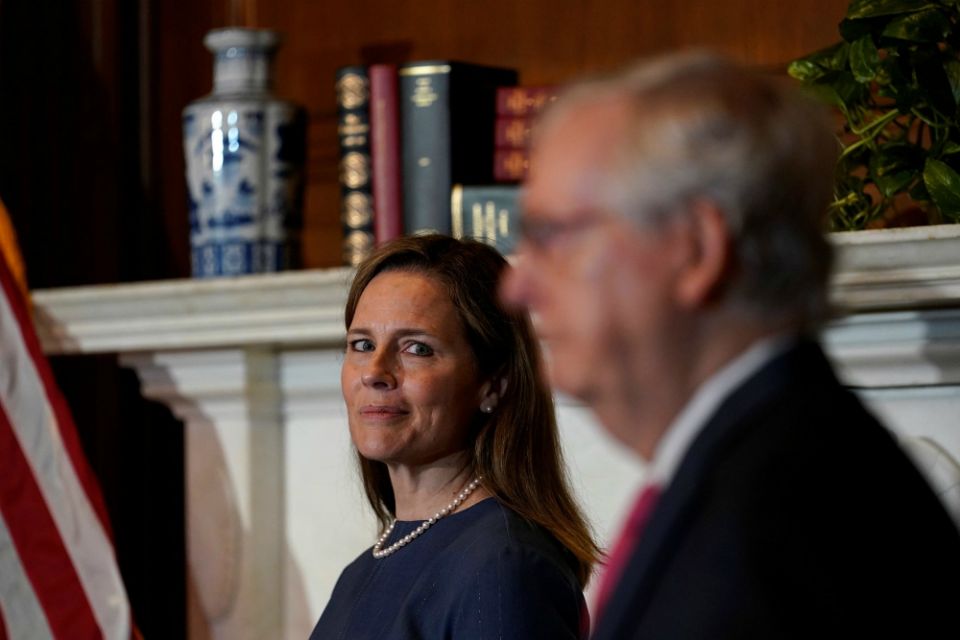 The confirmation hearing for Supreme Court nominee Amy Coney Barrett begins today. This formalization of the discussion that began soon after Justice Ruth Bader Ginsburg died will hopefully help rid that discussion of some of the foolishness that has attended it. Does anyone else find it remarkable that more than 230 years since the ratification of our Constitution, we are still so unclear about how the system of governance it erected related to religion? And, for that matter, how simply silly some of the norms governing confirmation hearings have become?

Let's look at religion. Writing in his archdiocesan paper, Milwaukee Archbishop Jerome Listecki complained that Barrett was subjected to a litmus test because of her faith:

Since Judge Barrett is a practicing Catholic, her litmus test as a Supreme Court nominee will be how well she has followed the Church's teachings. Was there a litmus test for those who claim to be practicing Catholics and either occupy or wish to occupy public governing offices before this? (I'm thinking of Joseph Biden, Nancy Pelosi or Andrew Cuomo.) Of course, any religious litmus test is against the Constitution of the United States. There may be other issues, but I believe that the pro-life issue is hidden in the subtle questions that will be asked to Judge Barrett. The religious litmus test, which is now required of other political candidates, is secularism.

If there is a litmus test for Catholics to join the court, someone must have given away the answers. If confirmed, Barrett will become the sixth Catholic on the court, and a seventh was raised Catholic. Out of nine. I guess we really should be terrified about the future of our religious liberty when we only have two-thirds of the highest court in the land.

Besides, it is Barrett's supporters who bring up her religion, and her big family, as often as do her critics. If it matters to conservatives, why is it not permitted to matter to liberals?

At the annual Red Mass at St. Matthew's Cathedral in our nation's capital, Bishop Michael Burbidge of Arlington, Virginia, preached the homily. He encouraged the assembled members of the court and other jurists and lawyers to "strive daily to bring Christ into the public arena. Be authentic witnesses of his saving work." If a Catholic is supposed to bring her faith into the public arena, surely non-Catholics are entitled to ask questions about it, as I pointed out when Barrett was first nominated.

That said, given the ridiculousness of the conversation so far, Democrats are ill-advised to focus on Barrett's religion. If last week's vice presidential debate is any indication, the Democrats understand that questioning Barrett about her faith is likely to backfire. Some questions in that regard are undoubtedly bigoted and others may be legitimate, but politically, it doesn't matter: Questioning another person's faith is bad politics. As Melinda Henneberger helpfully pointed out, "All faiths are at least a little bit weird to those outside of them."

My objection to confirming Barrett remains her judicial philosophy, specifically her commitment to textualism, a kissin' cousin of the originalism espoused by her hero Justice Antonin Scalia, for whom she clerked. She defined textualism in a 2010 Boston University Law Review article:

The defining tenet of textualism is the belief that it is impossible to know whether Congress would have drafted the statute differently if it had anticipated the situation before the court. The legislative process is path-dependent and riddled with compromise. A statute's language may be at odds with its broad purpose because proponents accept less than they want in order to secure the bill's passage. The language may appear awkward because competing factions agree "to split the difference between competing principles." To respect the deals that are inevitably struck along the way, the outcome of this complex process — the statutory text — must control. A judge who reshapes statutory language to alleviate its awkwardness risks undoing the very bargains that made the statute's passage possible.

Law review articles are not easy reading, although this one was more interesting than most. I saw no flashes of that "brilliance" with which she is so often credited. (Nor have I discerned it in anything else I have read of hers.) But, reading the article, what you realize is that originalists and textualists also have to decide which interpretive canons to apply, and why, and with what limits.

The problem with textualism, then, is not that it holds that the text is essentially self-interpreting, that the meaning of the words is fixed, even though the meanings of words are never fixed. The deeper problem is that textualists present their theory in such simplistic ways for popular consumption — who wants a judge who undermines the text of the Constitution? — but in fact the reasonings they apply are just as complicated and open to personal adjustment as those deployed by the court's liberals.

Put differently, do you think a conservative scholar like Scalia or Barrett would continue to adhere to textualism or originalism if it repeatedly yielded results they did not like? They can all point to the case or two that prove the rule, for example, Scalia's vote to defend flag burning in the 1989 Texas v. Johnson case. But that was a one-off. If it had become habitual, don't you think Scalia would have gone looking for a new judicial theory?

Like originalism, textualism permits judges to state, as Barrett did in her 2017 confirmation hearings, that personal beliefs matter not a whit to the interpretation of the law. When asked by Sen. John Kennedy of Louisiana about her reaction to the court's 1965 Griswold decision that married couples had a constitutional right to procure and use contraception, Barrett first noted that she had not been born when Griswold was decided.

Here is the problem. Former Supreme Court Justice David Souter never said, "To hell with what the text says. I am going to present my own personal conviction and make it the law." He also thought he was faithfully interpreting the law. Souter was appointed by President George H.W. Bush, but he ended up siding with the court's liberal justices more often than not.

Do Barrett's many defenders want us to believe that she might prove to be another Souter on the bench? Why not? After all, her personal beliefs and judicial philosophy will not matter a whit.

But if there is even the remotest possibility that a Justice Barrett could become a second Souter, do you think conservatives would be so thrilled at the prospect of her confirmation? Yet she will spend the better part of the next few days trying to convince us that she is open-minded when the only reason her supporters are so excited is that they know her mind is made up and it is decidedly and reliably conservative.

Barrett will likely avoid answering any questions about cases that might come before the high court, which are most of the interesting ones. In his confirmation hearing, Chief Justice John Roberts addressed the issue of why answering a senator's questions at a hearing differed greatly from the process by which a justice would reach his or her conclusions.

Will Gorsuch Own Schumer Just Like John Roberts Did in 2005?

In one sense, of course, Roberts was right but I think he was fibbing about the number of times the judicial process causes a judge or justice to change his or her views. He definitely was fibbing when he said that "judges are not politicians."

In fact, judges are politicians in robes. And they bring some of their own special causes to bear on their jurisprudence. The chief justice had it in for voting rights and Justice Samuel Alito had it in for labor rights. Why is it wrong to try and find out what issues Barrett is likely to make her special cause?

I wish — oh, how I wish — our culture was sufficiently sophisticated in its understanding of religion that we could look forward to senators asking intelligent, legitimate questions about how Barrett's religion has informed her judicial philosophy. When pigs fly.

So I hope the senators let her religion alone and focus instead on the contradictions latent in her judicial philosophy. It won't matter to the outcome; Barrett is going to be confirmed. But at least the senators can start laying the groundwork for a popular rejection of this intellectual nonsense and the Kabuki theater confirmations that such nonsense has spawned.

Column | Barrett's theology may be out of bounds, but not her judicial philosophy

Order in the court: Amid drama, Supreme Court gears up for new session