Can we turn to our 'better angels' after this election? 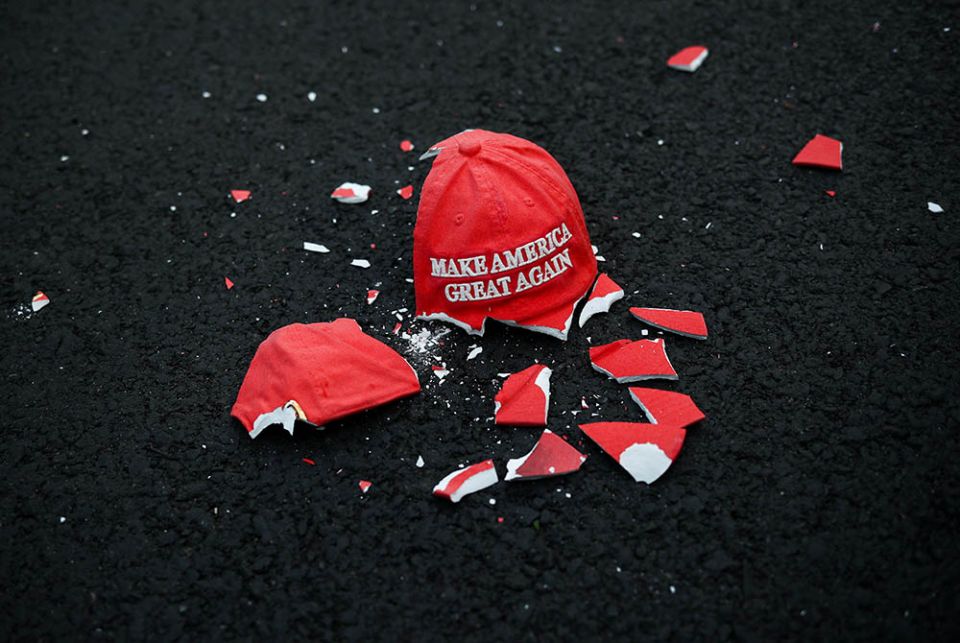 Editor's note: Like the rest of the country, we at the National Catholic Reporter have been intensely focused on the run-up to the U.S. elections. The coronavirus pandemic, economic devastation and a political polarization that may even threaten the existence of our democracy have made it one of the most consequential elections in our lifetimes, if not in the history of the United States. But where do we — as a country and a church — go from here? We asked four of our columnists and one bishop to reflect on that question in essays that will run daily during election week. This is the fifth installment. Read yesterday's commentary from Olga Segura, NCR opinion editor, here.

Admit it. Like me, you were hoping you would be able to start calling your friends around midnight as the election results came in, and ask them what kind of champagne they were drinking.

Instead, by midnight, one reality had become increasingly clear: Not only would it be days before we know who would serve as president for the next four years, but the country is divided more grievously than at any time since the Civil War. The great historian of that war, Shelby Foote, famously said that "it made us an 'is.' " Before the Civil War, Americans would say that "the United States of America are …" but after the war, it became "the United States of America is."

As I write, we do not know who won the election yet, but there is much we do know. The divisions in America today run through the states, not between them, but it is clear that those divisions run deeper than mere political differences. As always, different Americans think different issues are more important and support different approaches to issues all think are significant.

But, each half of the country now entertains opposing narratives about what threatens our democracy, who is really looking out for the average person, what values matter most, and what totems shape their belief systems. Internet algorithms guarantee our information is always serving to reinforce our prejudices by feeding us information that confirms them.

It is impossible to deny that one half of the country is, to put it charitably, less concerned with the veracity of what they are told than the other half. The whole point of talk radio is not to enlighten but to demonize. Roger Ailes created a news network, Fox News, that peddles propaganda. If you watch that network, you thought America's cities were all on fire this summer, that COVID-19 was virtually cured, and that President Donald Trump had done more for racial minorities than any president since Abraham Lincoln. The triumph of the shrill. We in the media have to consider, and consider deeply, how to function in this fact-free environment.

Trump is a uniquely gifted politician. He knows how to speak to his base and get them fired up. A man of enormous wealth, he refashioned himself the champion of the working man. His years in reality TV proved an ideal preparation for politics in the age of social media, when lies travel faster than truth and, if you tell enough of them, the truth never catches up.

The results Tuesday do not tell us as much about the president as they do about ourselves. In his first inaugural address, as the specter of civil war loomed, Abraham Lincoln concluded:

We are not enemies, but friends. We must not be enemies. Though passion may have strained it must not break our bonds of affection. The mystic chords of memory, stretching from every battlefield and patriot grave to every living heart and hearthstone all over this broad land, will yet swell the chorus of the Union, when again touched, as surely they will be, by the better angels of our nature.

Trump craves enemies. Bonds of affection are not his thing. He knows no chords of memory, mystic or otherwise. He has built his political career by giving the American people permission to be touched by the lower angels of our nature. It may have worked again, but even if former Vice President Joe Biden ends up winning, the result is frightening. Half the country was only too willing to let those lower angels run amok in their minds and hearts.

There are large swaths of this country where the people who have flocked to Trump deserve not a word of censure. In those old mill towns where there are no jobs, the opioid epidemic is both a metaphor and a symptom of the pain that is felt by the people. The vicious downward cycle of declining property values, lower tax base and fewer funds for schools can be found throughout parts of the Midwest. Who wants to grow up in a "Rust Belt"?

Trump did nothing for those people and their suffering communities. But he provided a narrative that allowed them to channel their anger and their frustration, and it contained just enough truth to make it believable. Bad trade deals like NAFTA really did help ship jobs overseas. Globalization resulted from a series of decisions, not from the laws of nature. The Democrats lost their way in the post-Reagan years, thinking they had to mimic the GOP's laissez faire approach.

Trump's performance art does not actually help struggling communities, but just as a junkie thinks that this time his opiate will help him, not harm him, half the country thought Trump, a kind of walking opiate, would cure their ills. At least he paid attention to them, talked to them, and both stoked and shared their sense of grievance. 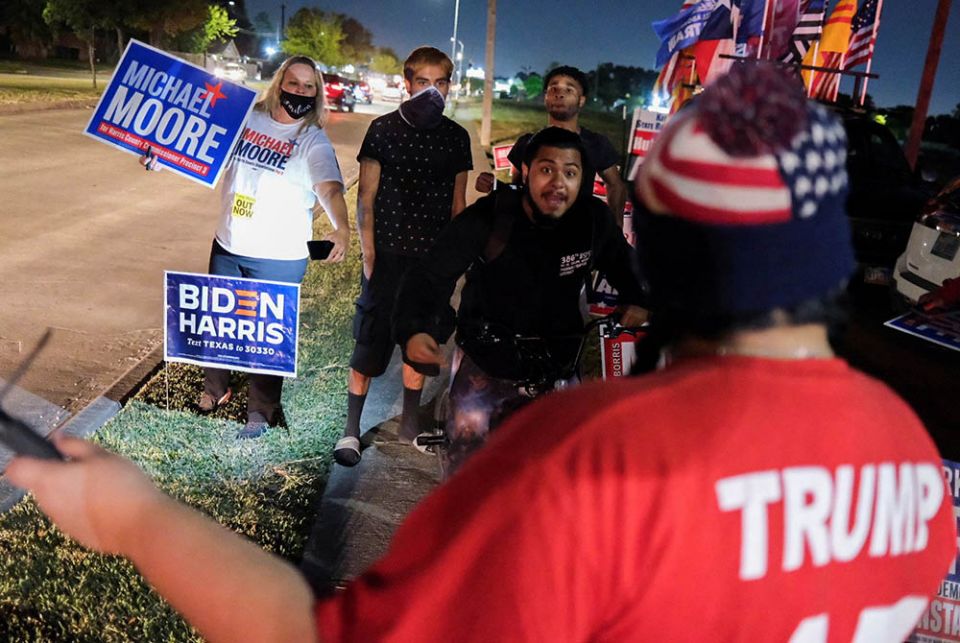 If Biden manages to win, he will need to resist the pressure he will get from the base of his party and remind them that he ran a campaign that promised to try and unite the country. During the final debate, Biden's scored his highest marks from a focus group of undecided voters when he responded to the president's vilification of "Democrat-run cities" by reminding the president that "They are all Americans." He campaigned on themes of human dignity and the common good, staples of Catholic social teaching which embrace everyone. Poll after poll shows that Americans are tired of being so divided, and Biden needs to at least try to unite the country.

Biden should consider making visits to five or six of the states in which he lost badly, and just listen. Do a town hall in Oklahoma, meet with farmers in Iowa, attend a church service in rural Alabama and stay to talk to the congregants over coffee afterwards. Explain that you promised to try and be a president for all Americans but mostly listen, just listen.

The presidency brings a great deal of symbolism with it. All presidents go to a religious service the morning of their inauguration at historic St. John's Episcopal Church on Lafayette Square across from the White House, but I would not be surprised to see Biden talk with the press when he leaves his own church on Christmas Day, or even on every Sunday. He might only share what he heard in one of the readings or the sermon, or any special prayer intentions he had at Mass that day.

In the days ahead, and once we know the final result, we will start looking at what this all means for policy.

Each morning, when I walk my dog, we stop and say a prayer at the shrine to Our Lady and then, as we continue our walk down Cedar Swamp Road, we sing the "Salve Regina." I had hoped that this morning, when I got to the words "Eia, ergo, advocata nostra, illos tuos misericordes oculos ad nos converte" — "Turn then, our most gracious advocate, thy merciful eyes toward us" — I would have the sensation of a prayer answered, that with the inspiration of the Blessed Mother, the American people in their goodness would have delivered us from Trumpism, and done so resoundingly.

Alas, even if Trump finally loses, election night did not feel like a deliverance. Half of my fellow countrymen witnessed this narcissistic charlatan, his indifference to the sufferings of immigrants and those afflicted with this deadly virus, and wanted four more years of him. It is a chilling thought but a true one. Anyone who genuinely cares about the future of our country needs to think and think hard about how we can be about the business of building a culture that is not built on vitriol and propaganda. It is a tall order but there is no alternative. 2016 was no fluke. America is gravely ill.

Column | Can we turn to our 'better angels' after this election?