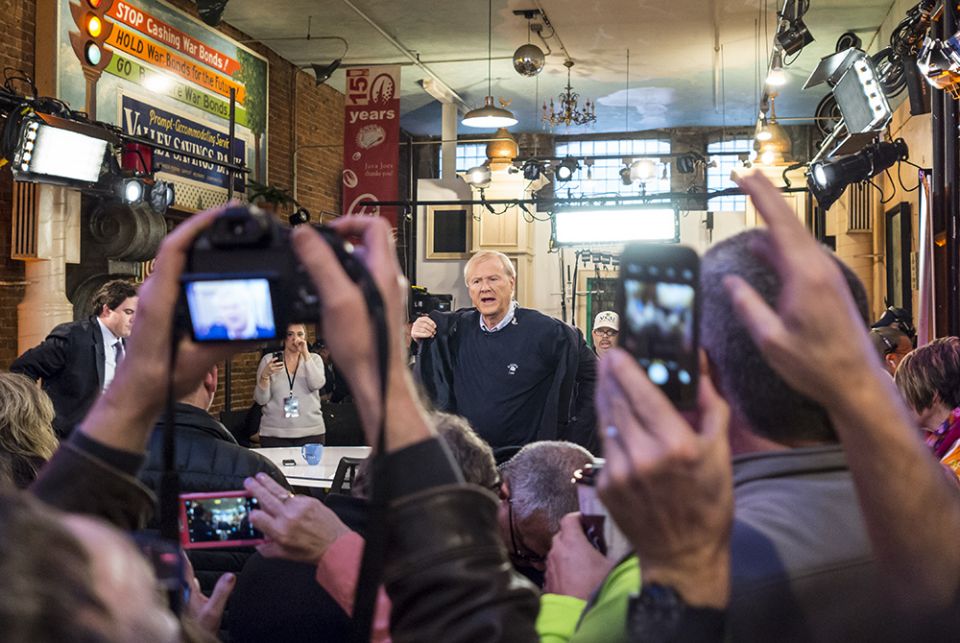 Chris Matthews, former host of MSNBC's "Hardball," has a new autobiography out, This Country: My Life in Politics and History. It reads like you would expect — and want — a book by Matthews to read, that is, it is rambunctious, smart, attentive and fearless.

Full disclosure: I have known Matthews and his wife, Kathleen, for many years, as would almost anyone who moved in journalistic or political circles in Washington in the past 50 years. What always struck me was that their on-air personalities were the same I encountered when they came into Kramerbooks & Afterwords to buy a book or for a late-night supper after the White House Correspondents' Dinner. The waiters liked taking care of the Matthews because, unlike some celebrities, they were never condescending or demanding, and they tipped well. 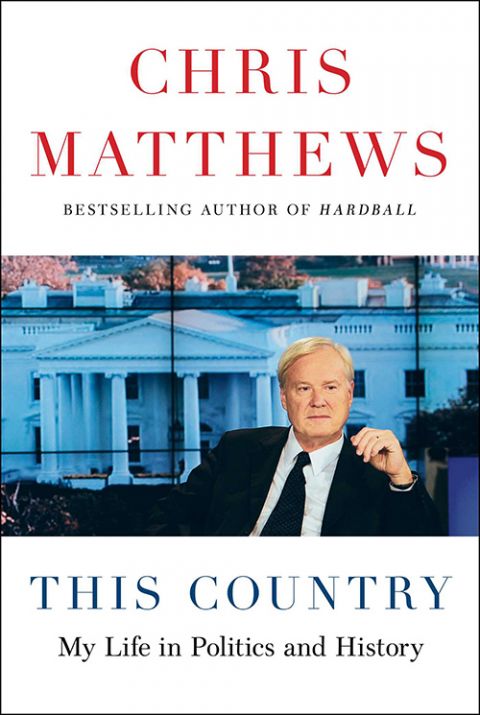 The cover to "This Country: My Life in Politics and History," Chris Matthews' new autobiography (Courtesy of Simon & Schuster)

Now, we know why he was such a good tipper: After graduating from Holy Cross College, Matthews was a singing waiter one summer at Your Father's Mustache in Somers Point, New Jersey, something I did not know about him until reading this book. He thought he was doing OK, but the regional manager told him: "Maybe this isn't your cup of tea." Who knows, we might have had to go to Broadway to encounter Matthews if that gig had worked out better?

Instead, the Holy Cross alum began graduate studies in economics at the University of North Carolina at Chapel Hill. This being the 1960s, the specter of the Vietnam War hung over all men his age and Matthews, who did not find grad school that exciting, enlisted in the Peace Corps, serving in Swaziland as a trade development advisor. He returned and decided to head to Washington, D.C. and look for a job on Capitol Hill.

The only job that was immediately available was a patronage position as a Capitol Police officer so Matthews learned how to fire a pistol and the role patronage played in making the Congress work. He also helped out in the office of Sen. Frank Moss from Utah, who had gotten him the police job and eventually earned the title "legislative assistant," doing research and writing letters to constituents. On a daily basis, he learned the subculture that is the U.S. Congress. Matthews explains how one of his first great policy ideas, to make a cost-of-living increase in the minimum wage automatic, failed because no politician gets credit for an automatic increase.

Matthews provides a short account of attending the tumultuous 1972 Democratic National Convention in Miami. It was chaotic, as new rules designed to make the process more participatory and eliminate the infamous "smoke filled rooms" took effect. Without anyone calling the shots and orchestrating the event with a mind to the viewers at home, there were so many people nominated to be Sen. George McGovern's running mate, it was not until nearly 3 a.m. before McGovern came to the podium and made the case for his election to the American people, most of whom had long since gone to bed.

After working on a campaign in Utah and some freelancing, Matthews made an unsuccessful bid for a seat in Congress in his native Philadelphia. Running against an entrenched incumbent in a city that still had a well-oiled political machine, Matthews was a long shot and he lost, but the experience added to his growing resume of political experience. He returned to Washington and got a job working for Sen. Edmund Muskie on the Senate Budget Committee. An example of the kind of lesson you only get from the inside is found in his description of Muskie's "Vesuvian temper." Matthews notes, "Such a temperament can be a problem when exposed to the general public. … [b]ut as a legislator, a reputation for having a bad temper can give a senator an edge. Few enjoyed the prospect of having to lock horns with the senator from Maine."

In 1977, Matthews joined the Carter administration working as a speechwriter. He notes that Carter had written to him in 1974 after his primary loss, and recorded the lesson: "This shows the savvy that took a one-term Deep South governor all the way to the White House. Rather than throwing kisses to recent victors, he was putting out lifeboats to the shipwrecked."

After Carter's defeat in 1980, Matthews worked as administrative assistant to Speaker of the House Tip O'Neil when the gregarious Boston pol was the face of the Democratic Party in a 1980s Washington dominated by Ronald Reagan. The next six years cast Matthews in the role of strategizing for the opposition.

All these twists and turns are told in an autobiographical fashion, but not only that. Matthews is also examining years of profound change in American politics, and doing so from the ringside seat he enjoyed. Between 1971 when he returned from the Peace Corps and 1987 when O'Neil stepped down, the country had gone from a time when old-style liberals still controlled the Democratic Party and moderate Republicans were still a force in theirs, through Watergate and the economic challenges of the 1970s, to the political realignment achieved by Reagan. 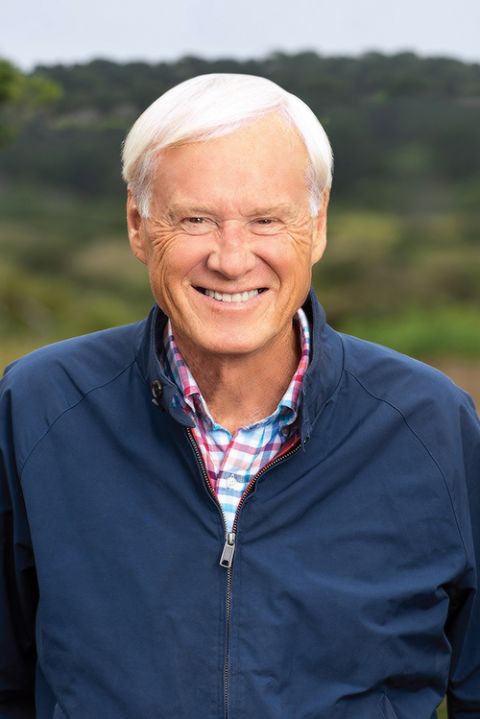 It was these up-close and personal experiences that distinguish Matthews from so many other cable news hosts in the early 21st century: He had been in the trenches of politics and knew how it really worked; he had not read about how it worked while studying at Harvard or Yale.

The text is littered with life lessons he collected along the way. For example, after consulting with no less a personage than investigative journalist Bob Woodward when thinking about writing his first book, Matthews opines: "In all my years in politics and journalism, it has been my experience that the people to count on for help are those most confident in their own capabilities. Such people are not haunted by fear of the next rival. It's those worried about holding their place that you have to watch out for." This is emphatically true, but very few people have the courage to say it out loud.

It was that courage that made Matthews such a great cable news host. He never toed any line. He always said what he really thought even if, sometimes, it caused him embarrassment, as when he said listening to candidate Barack Obama give a speech sent "a thrill up my leg." Usually, of course, it was the unprepared interviewee who ended up embarrassed. Who can forget Matthews interviewing right-wing blowhard Kevin James, who repeated the conservative talking point that Obama would appease America's enemies as Neville Chamberlain had in the 1930s. Matthews intuited that James had no idea what Chamberlain had actually done and would not let him off the hook. It was brutal. It was brilliant.

Matthews' years in journalism, first as a columnist for the San Francisco Examiner, frequent contributor to The New Republic and on-air commentator for CBS News, and finally as the host of "Hardball," constitute the last third of the book and will be more familiar to readers. I was unfamiliar with one incident early in that career: The Washington Post's David Broder gave a lecture and then wrote a column criticizing a "new hybrid creature" who is a political operative one day and a commentator the next. He worried, rightly, about "the insidious inhibition of intimacy." He did not name Matthews, but his colleague Richard Harwood did and he shared Broder's suspicion.

There is something to the concern, no matter what beat a journalist covers, but especially politics. Power is such an aphrodisiac. But the opposite danger is also obvious, that newsrooms lack anyone who actually knows what is going on behind the scenes and must rely on the reports of others to get a sense of how it all works.

Matthews relates that he was so upset he went in to meet with the Post's executive editor, Ben Bradlee, to complain about the attack on him and his ilk. "What did you come in here for?" Bradlee retorted. "To lift your leg on me?"

The vignette captures Bradlee but it also tells us something about Matthews: Looking back on his career all these years later, he is not afraid to share a story in which he was not at his best, but which is instructive. And funny.

He recounts his memories of reporting on the fall of the Berlin Wall, the end of apartheid in South Africa, the terrorist attacks of 9/11 and the rise of Barack Obama to the presidency, each time drawing lessons that would, in turn, inform his commentary on other issues. If journalism is the first draft of history, here is a good first draft.

The most personal chapter is also one of the shortest, but I am glad Matthews included the tale of his courtship of television journalist Kathleen Cunningham who would become his wife. If there is a more thoughtful person in Washington's media culture than Kathleen Matthews, I do not know it.

Throughout the book, usually in the background, is Matthews' Catholic faith. Growing up in a Catholic neighborhood in Philadelphia, attending parochial schools, then a Catholic high school and college, that faith formed Matthews' intellect in important ways: The "hither and yon" aspect of a journalistic career always had the rootedness of a good Catholic education as a kind of ballast. I do not know if Matthews intends another book, but an article on how his faith informed his work would be a good read.

For many years, part of my evening ritual was turning on the television and watching "Hardball." I was fortunate to have been a guest some times when news about the Catholic Church was dominant. Matthews quit in March 2020 after reports he had made inappropriate comments about the appearance of a woman guest. He did not make excuses even though his offense was nothing like the crimes committed by some others felled in the #MeToo reckoning. I am glad he handled that situation the way he did, but I also admit that I have found myself missing Matthews' commentary, his wit, his knowledge and his smarts ever since.

In this book he says he was lucky, and that was part of it. But Chris Matthews was the kind of person whose opinion you wanted to get, the kind of guy who made you smile when he walked in the room, someone who made us all smarter and better informed. Now, in this lively book, he shares lessons from his extraordinary life. It is a good read.