The Democrats' virtual convention achievement: The message got out 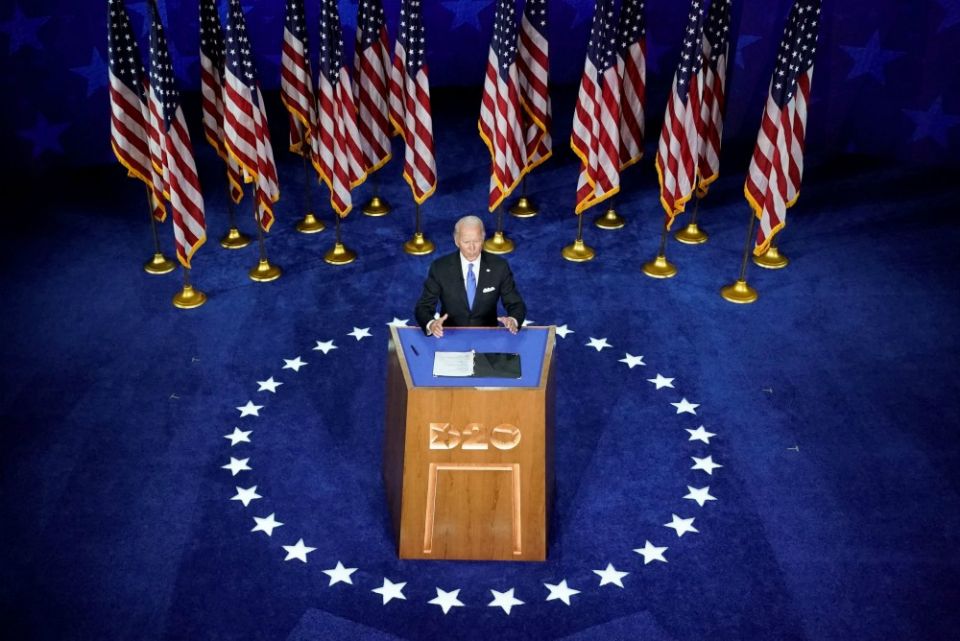 As different as this year's Democratic National Convention has been on account of the coronavirus, one dynamic remained the same: The three prior nights build to a climax on the final night when the presidential nominee delivers his or her acceptance speech. Everything is preparatory to this speech, and if all goes well but the speech bombs, the convention was a bust. If all goes well and the speech succeeds, the convention was a boon.

Monday night set the tone for Joe Biden's pitch, a "big tent" approach that stressed centrist themes, the support of longtime Republican political leaders, and nonpartisan qualities like competence, empathy and experience. Some traditional Democratic themes emerged, especially around the idea that the government should take an active role in shaping the economy, and a strong defense of small-d democratic values in the face of President Donald Trump's egregious disregard for democratic norms. Sen. Bernie Sanders was not made for virtual media: He can electrify a room, but not a screen.

As important as the totems that were presented was one that was not: There was no mention of abortion. As I noted a few weeks back, very few voters name abortion as their top issue, but its totemic import is obvious: If a voter knows where you stand on the issue, and how he or she talks about it, a whole worldview is assigned to that candidate. In these highly polarized times, the assignation is often correct because admitting ambivalence on fraught issues is dangerous in the age of Twitter.

Wednesday night showcased many Democratic women leaders addressing a range of issues, but it fell to Sen. Elizabeth Warren to plant the progressive flag, highlighting one of the economic plans she helped Biden craft, creating universal child care as an integral part of the nation's infrastructure. And Sen. Kamala Harris gave an excellent speech introducing herself to those millions of Americans who did not know much about her. It is hard to imagine a more compelling, or more compellingly American, story than that of this child of immigrants for whom education opened doors and hard work and smarts crafted a successful career.

As was typical of all modern political conventions, much of the time was spent telling the world what great person the nominees are. This year, because the convention was virtual, there was more face time with average people: Biden was nominated by a woman, Jacqueline (she did not wish to disclose her last name), who met Biden when she was operating the elevator at The New York Times office building.

One of the most powerful testimonies on Wednesday night came from a woman whose son saw Biden coming toward him and handed the vice president his cellphone. "He talked to me for half an hour," the woman said. People who rode the train from D.C. to Wilmington, Delaware, with Biden over the years testified to his kindness.

The most powerful speech of the final night of the convention was from 13-year-old Brayden Harrington, who speaks with a stutter and met Biden on the campaign trail in New Hampshire. The young man struggled with some words, but he kept going, telling a national audience how Biden helped him and the bond they shared. The Democratic National Convention sent out a video clip and it had been viewed on Twitter by more than 6 million people as of Friday morning.

“I’m just a regular kid, and in a short amount of time, Joe Biden made me more confident about something that’s bothered me my whole life. Joe Biden cared.”
– Brayden Harrington#DemConvention pic.twitter.com/KoPprXXwCQ

In a standard convention, the camera crews interview delegates, most of whom are political officials back home. This time, it was nonpolitical people testifying to Biden's character. All agreed he is an average Joe.

Thursday night began auspiciously, with Social Service Sr. Simone Campbell delivering a prayer that was inclusive and yet specific, building on the image at the very start of the Hebrew Scriptures: God bringing a new creation out of chaos. Poor Fr. James Martin got booted off the network coverage with his closing prayer. You had to catch it on C-Span, but how wonderful that the Jesuit mentioned the unborn at a Democratic convention during which the word abortion was not mentioned even once. I do not pretend this represents a sea change in Democratic policy, but it reflects the Biden campaign's calculations of what is important, which in turn will decide what is included in any mandate Biden receives if he wins in November.

Campbell's prayer seemed to reverberate as it gave way to a section on faith. The video of Biden at a town hall in South Carolina showed him speaking with the pastor from Mother Emanuel AME Church. Biden recalled that the families of those killed by a white supremacist had publicly forgiven the murderer, "forgiveness, the ultimate act of Christian charity." The clip also showed him quoting Kierkegaard: "Faith sees best in the dark." 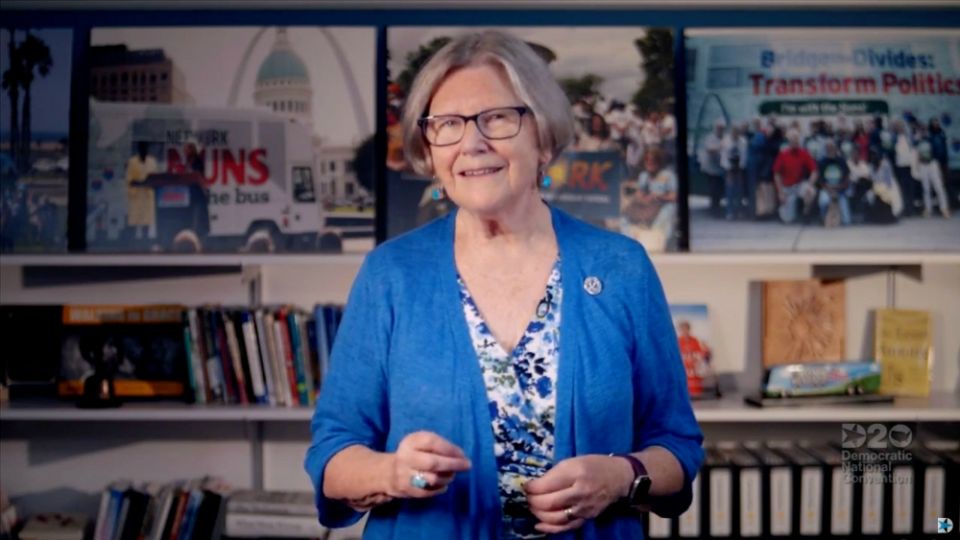 The rest of the night jumped around a lot. It was almost jarring to hear conservative presidential historian Jon Meacham, followed by New Mexico Congresswoman Deb Haaland, one of the only Native American members of Congress, followed by comedian Sarah Cooper with her exquisite lip-synch impersonation of Trump. The sequence worked. Why? Because the theme was the same: The country is at a turning point and the choice voters make in November will be with us not only for four years but forever.

Watching the segment in which Biden talked with union workers, the former vice president was completely at ease. I had the thought that Trump, also, would find a way to speak easily with the working-class crew. But the next segment demonstrated the difference: Focusing on health care and COVID-19, a video featured a variety of public health experts and front-line health care providers, speaking about the pressures they face. How different the discourse is when the speakers do not have to skirt the truth or minimize the bad news in order to stay on the good side of the boss!

I have no specifically Catholic angle on Biden's speech. I will only echo something I heard former Obama administration official Van Jones say on CNN: You can't deliver that speech and not sound really hokey unless you genuinely believe it, and Biden genuinely believes it so it worked, and not only worked, but was very powerful. Even Fox News' Brit Hume had to admit, "Trump is going to have to run against a candidate not a caricature."

The convention's changed format due to the pandemic was loved by some and hated by others. It is true that in a typical convention, the networks pull away from most of the speeches and conduct interviews or hold roundtable discussions. This time, the cameras stayed with the speakers because they had to.

The message got out, whether you found the roll call hokey or wholesome. This was the most important achievement: At a time when the whole country has been turned upside down and the incompetence of the White House in responding to the pandemic is obvious, the Democrats at least showed they could mount an entirely different kind of convention and make it work. The proof of the pudding was in the eating. They did what they had to do.

A Wall Street Journal/NBC News poll this week indicated that 58% of voters backing Biden are more likely to say they are "voting against Trump" than that they are "voting for Biden." People should not rush to the conclusion that voters are lukewarm about Biden. Trump stands astride the nation's politics the way he has stood astride almost every news cycle in the last five years. When an incumbent is running, the election is almost always a referendum on that person's tenure, but with Trump, this is even more the case.

Expecting this election to be about Biden would be like going to a BBQ restaurant and evaluating the dining experience based on the iced tea. No one wants bad iced tea, but if the BBQ is good enough or bad enough, the tea won't matter. This most polarizing of presidents evokes emotions that no political figure has evoked since Sen. Joe McCarthy went to his eternal reward. That analogy works at several levels, yes?

In a matter of months, the country lurched into a recession. I fear the autumn will be grim: As the days get shorter and outside activities cease in much of the country, some businesses like restaurants will close again. Schools are already canceling their in-person attempts at education. Infection rates could spike. The nation is in for some rough times.

The fundamental problem for the Democrats was elided and ignored: The party leaders and those most likely to staff their campaigns and their political offices tend to be more extreme on social issues and more neoliberal on economic issues at a time when the country is ready for more progressive economic policies but still resists more extreme cultural stances. 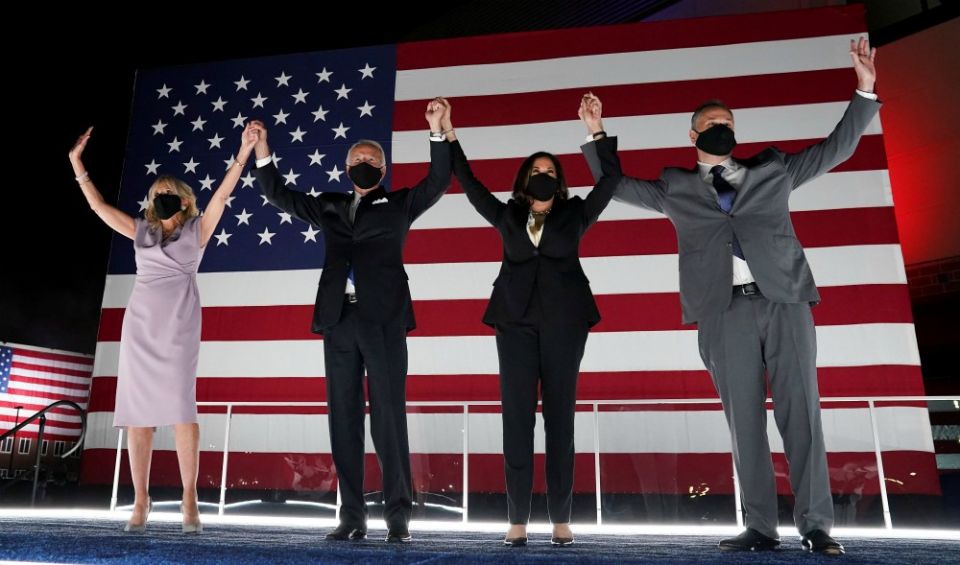 It was good that the convention stayed away from the most divisive issues at a time when most people are focused on the public health emergency and its economic consequences. But those tensions simmer below the surface and if Biden wins, he will have to decide how to bring the party together around a governing agenda, and not merely a dump-Trump campaign.

The Biden campaign team understood that this four-day event was less of a persuasion event than a get-out-the-vote event. Speaker after speaker reminded people to vote as soon as possible, not to let Trump's warnings about chaos and voter fraud keep them from exercising their constitutional right, which, this year, is a constitutional duty.

That is all that matters now. Yes, there will be debates and it is important that Biden not have a major gaffe, or if he does, he recovers gracefully, as Reagan did in his second debate with Walter Mondale in 1984. There will be millions of dollars spent on ads, and they will not matter either. People have made up their mind about Trump one way or the other. What matters now is which side gets its people to the ballot box.

In 2016, overall turnout was up from 2012, but down from 2008. The key difference was that Clinton trailed Obama's numbers while Trump exceeded Romney's. All that matters now is which campaign gets its people out to vote. And whether or not this will be our last election or the end of Trumpism.

Next week, the GOP holds its virtual convention and I shall have a curtain raiser ready Monday morning.

A version of this story appeared in the Sept 4-17, 2020 print issue under the headline: The Democrats' virtual convention achievement: The message got out .

Column | The Democrats' virtual convention achievement: The message got out