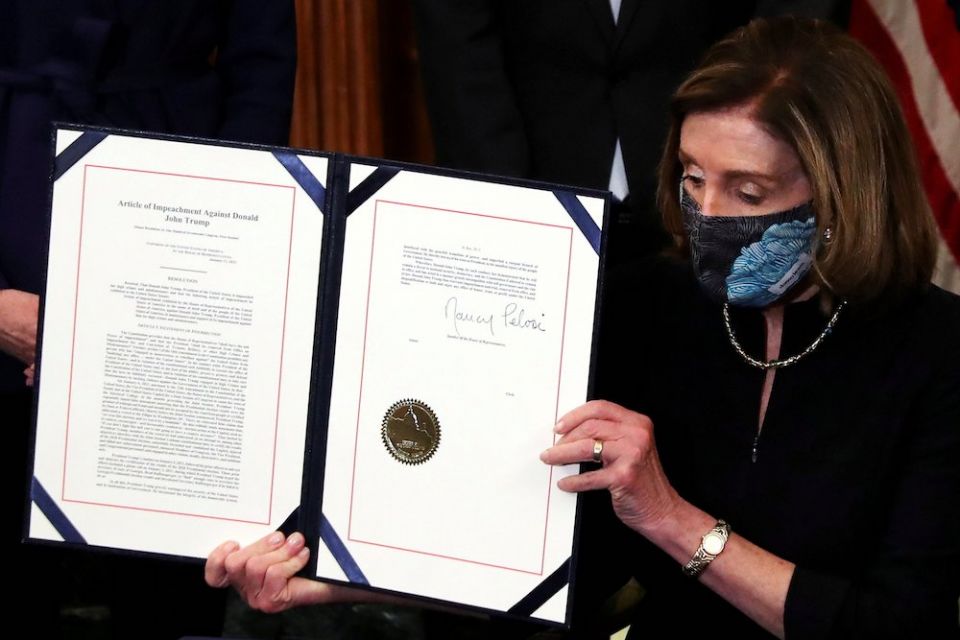 House Speaker Nancy Pelosi, D-Calif., shows the article of impeachment against President Donald Trump after signing it in an engrossment ceremony at the U.S. Capitol in Washington Jan. 13, 2021. (CNS/Reuters/Leah Millis)

In the Book of Genesis, Ch. 18, Abraham pleads with God, that he forbear sending destruction upon Sodom if there be but 50 righteous men in the city, then 40, and so on. At verse 32, we read:

Then he said, "May the Lord not be angry, but let me speak just once more. What if only ten can be found there?"
He answered, "For the sake of ten, I will not destroy it."

On Wednesday, 10 Republican members of the House of Representatives joined all Democrats in voting to impeach President Donald Trump on the charge of inciting insurrection. I do not know if God will intervene to spare the Republican Party as he once spared Sodom. I suspect God has better things to do. Besides, the devil looks after his own.

Those 10 Republicans deserve our respect. They saw the video of Sens. Lindsay Graham and Mitt Romney being accosted at the airport, being called "traitor!" so they know they may well have ended their political careers. They did so in order to fulfill the oaths they took just two weeks ago to defend the Constitution. Last week, they almost lost their lives at the hands of a pro-Trump mob.

They will likely lose their seats at the hands of pro-Trump voters because redistricting means that most members of Congress need only fear a political challenge from within their party in a primary. Three-quarters of Republican voters still back the president, according a Politico poll.

The other 197 Republicans voted not to hold the president responsible. They saw the airport videos and concluded they did not want that to happen to them! Their political interest alone justifies their stance. "I had to do it, don't you see, or else they'd go for me," sings Simon Peter in the rock opera "Jesus Christ Superstar," explaining why he denied Jesus three times.

It was especially ironic to see Republicans complain about the lack of witnesses. Where was that concern last January when Trump was tried during his first impeachment? The calls to stop the impeachment in the interest of national unity were similarly laughable. 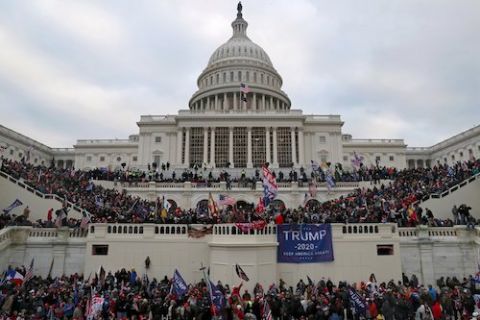 The political landscape in the Senate, where the case against Trump will be tried, is different. Senators represent states, and state boundaries are not subject to redistricting, so they will be noticing that the president's approval rating among all voters in that Politico poll has dropped to 34%. They will have noticed that their Republican colleagues from Georgia both lost their bids for reelection before the mob assault on the Capitol. Twenty Republican senators are up for reelection in 2022 compared to only 14 Democrats. The man leading the GOP effort, Sen. Rick Scott of Florida, newly selected as head of the Republican Senatorial Campaign Committee, may face special challenges in Pennsylvania seeing as he voted to disenfranchise the voters of the commonwealth last week.

Soon-to-be Sen. Minority Leader Mitch McConnell has signaled that he thinks the president's actions might have been impeachable. That has not stopped him from kicking the trial can down the road until after Sen. Chuck Schumer becomes the majority leader as soon as Georgia certifies its elections. McConnell evidently recognizes that the GOP must shed Trump, and the president's outrageous behavior in inciting the mob is the opportunity to do that.

Trumpism will be harder to overcome than Trump. A significant proportion of our fellow citizens have been trained to believe nonsense on stilts. When confronted with evidence or argument that challenges them, they shout "Fake news!" While walking my dog, I asked a neighbor about U.S. Rep. Liz Cheney's decision to support impeachment. "She is a globalist!" was the reply.

Still, when Trump leaves the stage, I wonder if the movement will lose steam. There have always been and will always be conspiracy theorists, racists, anti-Semites, Second Amendment fanatics and the like. They each adhere to their own fantastic theories and inability to properly assign values to issues. Each will always pose an episodic danger. What made last week so frightening was that these disparate groups had come together for a common cause, to defend the false claims of the man who had defended them.

The House was right to impeach Trump on the merits and before history. There is no doubt he incited the mob. This week, on Fox News, they emphasize the one line in his Jan. 6 speech that was not incendiary — "I know that everyone here will soon be marching over to the Capitol building to peacefully and patriotically make your voices heard" — ignoring the fact that the whole speech, the whole last two months, have been one long incitement to violence.

Let me repeat what I wrote that first night after the attack: "If half of what the president alleged was true, those who stormed the Capitol were right to do so. If there really was such widespread election fraud, they were justified in attempting to stop the certification of a stolen election. In a democracy, nothing, nothing is more treasonous than undermining an election." Stealing an election is a lot worse than a tax on tea!

But — there is always a but — those who care about the future of the republic need to be politically adept, not just morally right. The danger of impeachment was always that a not guilty verdict in the Senate would become an exoneration in the minds of millions, proof that this was all a witch hunt by the Democrats, evidence that Trump was correct when he claimed he was the most persecuted president in history. Whatever anyone's theories about the sources of Trump's popularity, whatever one's ideas about what a Democratic administration should accomplish, the first task of all who care about maintaining our democracy is to make sure Trumpism becomes a sad and singular episode in our history. We cannot risk a repeat.

As Jesus said, "Behold, I am sending you out as sheep in the midst of wolves, so be wise as serpents and innocent as doves."