Our friends at WherePeterIs really have been hitting some home runs lately, but this article by D.W. Lafferty explaining the effective merger of "Viganoite Catholicism with the MAGA movement" is especially fine. And they followed it up with an analysis by Rachel Amiri of Archbishop Carlo Maria Viganò's misuse of the biblical phrase "children of light." Really good stuff going on over at WherePeterIs.

At Religion & Politics, David Gibson predicts there will be a "religious recession" in post-COVID-19 America, and he makes some salient points. But the Holy Spirit moves where it wills, and I think Gibson's scenario, though plausible, may be overtaken by other facts. It is a remarkable fact of history that certain plagues like McCarthyism end very quickly. This year, Mike Bloomberg spent half a billion dollars on a vanity run for the presidency and that crashed and burned in about 45 seconds. 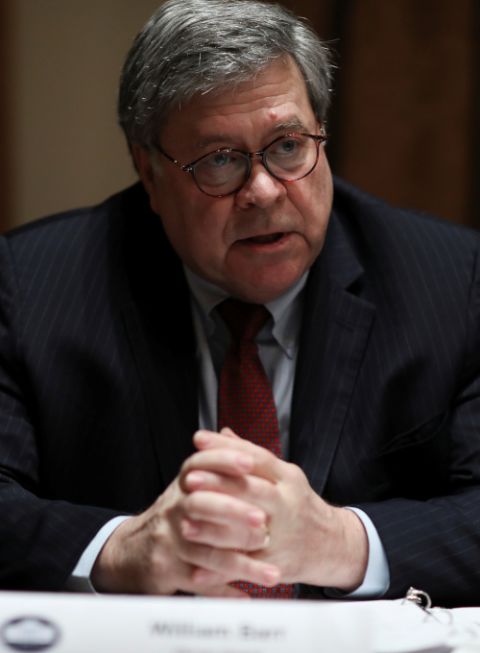 Is it time to begin a new parlor game? Who is more evil, President Donald Trump or Attorney General William Barr? It is evident that the president often is clueless about why what he does is so wrong, so illegal or so offensive. But what is Barr's excuse? The kind of blatant political interference now being alleged in the Department of Justice's handling of cases involving the president's cronies undercuts the rule of law at its root.

Also at The Washington Post, Sergio Peçanha collects data that shows how Black and white Americans inhabit vastly different socio-economic countries. The numbers are sobering and if this moment is to really be different, our politics and our broader society need to come up with concrete ways of addressing these scandalous and immoral inequities.

At New York Magazine's Intelligencer, Jonathan Chait unpacks an ugly episode at a progressive listserv in which a purportedly liberal discussion was hijacked by illiberal norms. One of the cornerstones of classic liberalism is that thoughts should not be punished as deeds are, a cornerstone erected largely in response to the religious sensibility that heresy was a civil crime, indeed the most grievous of civil crimes. Chait's argument is balanced and non-accusatory, and I hope it will be received in that vein.

Imprecision is not always a deficit, but it is when you are a religious leader trying to promote peace in a region afflicted by violence for decades. Three Christian leaders, according to this report, state that the "root cause" of the violence in the Holy Land is the Israeli "military occupation of Palestine." That is strange because the fighting began long before the 1967 war when Israel began its occupation of the West Bank and it has persisted long after Israel ceded control of the Gaza Strip to the Palestinian Authority in 2005. I deplore Israeli settlements in the West Bank and agree that the occupation must end, but it is nonsense to cite that as the "root cause" of this astonishingly complicated situation born of many, many causes.

Yesterday, I wrote about the vandalism of statues here in the U.S. Alas, the same kind of anachronistic reading of history is going on in the U.K. where a statue of Winston Churchill was vandalized and boarded up, but not torn down. There is no doubt that Churchill harbored views we would now consider racist but that most people at the time shared. In his marvelous account of the friendship between Churchill and Franklin Delano Roosevelt, Franklin and Winston: An Intimate Portrait of an Epic Friendship, Jon Meacham recounts a diary entry by Vice President Henry Wallace in which he recounted a luncheon conversation with Churchill. The prime minister offered up a postwar vision of Anglo-American leadership that Wallace found objectionable. "And so you believe in the pure Anglo-Saxon race or Anglo-Saxondom-ueber alles [sic]." The "ueber-alles" reference must have been deeply offensive to Churchill but he replied that "his concept was not a race concept but of common ideals and common history." Meacham then offers his own perspective on Churchill's – and FDR's – racism:

At its best, Churchill's vision of an Anglo-Saxon world order emphasized unique democratic virtues, and without his defense of freedom in the 1940s, the advances in civil rights and liberties that took place in the second half of the twentieth century might not have happened at all. Churchill and Roosevelt were both largely creatures of their time on questions of race and ethnicity, but fortunately their overriding concern was the preservation of those forces and institutions — the American and British understandings of justice and fair play — that would ultimately move us to higher ground.

The choice in 1940 was not Churchill or Howard Zinn. Had Hitler prevailed, what would have happened to black and brown people the world over? Would Hitler had stopped after exterminating the Jews, the gays, the Roma and the liberal intellectuals? Meacham's is not only a more historically grounded approach, it is more humane as well.

US bishops plan to be stronger advocates for Israeli-Palestinian peace