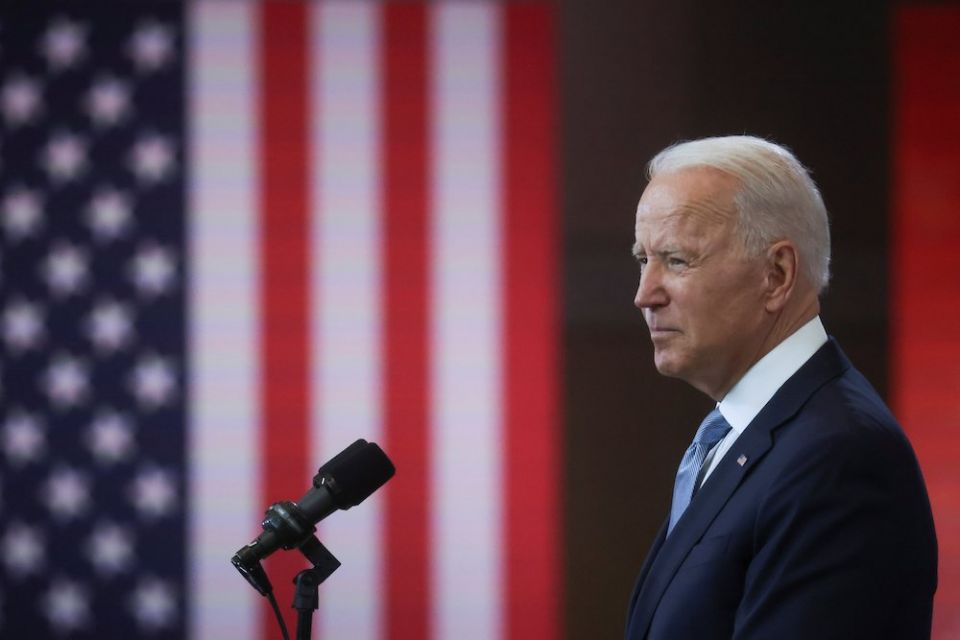 President Joe Biden gave an extraordinary speech about voting rights this week at the National Constitution Center in Philadelphia. The speech came at an extraordinary time: His predecessor continues to spread the big lie that Biden did not really win the 2020 election, several states are enacting restrictions on voting, and, in Texas, Democratic legislators fled the state, leaving the state legislature without a quorum, in order to stop the effort there to make it harder to vote.

There could be good faith disagreements about how to administer an election. For example, I am not keen on early voting. Events can happen in the last week of an election and a significant percentage of the electorate may have already cast their ballots. That happened in Nevada's Democratic primary in 2020, where many residents had already voted before Sen. Elizabeth Warren dispatched the $500 million candidacy of Mayor Mike Bloomberg in precisely one minute. My favored idea, that Election Day always be a holiday, has fallen by the wayside.

Whatever the methodology, however, there used to be a consensus that getting more people to vote is a good thing. Not anymore. Donald Trump can't bring himself to admit defeat. What is more, he has decided that the best way for him to reclaim the White House is to allege election fraud and encourage Republican-controlled state legislatures to pass new restrictions on voting, especially restrictions that make it harder for poor folk to vote.

Biden was not shy about reminding his audience that Trump's bruised ego is predicate for these voter restriction efforts and to call them by their name: un-American. The heart of his speech was this:

The 2020 election — it's not hyperbole to suggest — the most examined and the fullest expression of the will of the people in the history of this nation. This should be celebrated — the example of America at its best. But instead, we continue to see an example of human nature at its worst — something darker and more sinister.

In America, if you lose, you accept the results. You follow the Constitution. You try again. You don't call facts "fake" and then try to bring down the American experiment just because you're unhappy. That's not statesmanship.

That's not statesmanship; that's selfishness. That's not democracy; it's the denial of the right to vote. It suppresses. It subjugates.

The root of this assault on democracy is Trump's psyche and selfishness.

The passage also captures the connection between political democracy and our sense of fair play, something we teach our children. Just as the rules apply equally in order for a game of baseball to work, the rules for our elections need to apply equally for the results to have legitimacy.

It's not just elections. Our sense of fair play should extend to other parts of a democratic nation's culture: a free press; freedom of speech; an independent judiciary; freedom of assembly; vibrant civic organizations; and freedom of religion to remind us that there are truths and realities beyond the horizon of our human affairs. These are not Jeffersonian niceties. They are the fabric of our democratic order and anyone, on the left or the right — and yes, there are those on the left who have become inalert to the value of fair play — anyone who questions them is endangering our democracy.

Not all threats are created equal, of course, and in his speech, Biden identified what is clearly the most serious threat our democracy faces:

To me, this is simple: This is election subversion. It's the most dangerous threat to voting and the integrity of free and fair elections in our history.

As I noted previously, the Texas legislature tried to insert a provision that would have allowed elected judges to toss election results without any proof of election fraud. They removed the provision, and now claim to know nothing about it, but they did so only under pressure. Trump is also taking steps to install acolytes in key positions to make sure they will do his bidding in 2024, most notably in Georgia, where he is backing the candidacy of Rep. Jody Hice against incumbent Brad Raffensperger who famously declined to "find" votes for Trump last year.

This week, we received some excerpts of a forthcoming book about the final year of the Trump presidency by The Washington Post's Carol Leonnig and Philip Rucker. They report that in the days leading to the insurrection on Jan. 6, Gen. Mark Milley, the chairman of the Joint Chiefs of Staff, warned his aides that Trump might try and effect a coup. "This is a Reichstag moment," Milley reportedly told aides. "The gospel of the Führer."

Let that sink in. No wonder congressional Republicans did not want an investigation into the events of Jan. 6. You can bet that Milley will be called to testify.

Neither Biden's speech nor some future testimony by Milley will dissuade those who still fly their Trump flags or attend his bizarre rallies. On Fox News, they made fun of Biden's speech and Laura Ingraham attacked the military after Milley's quotes became public. Note to Ingraham: How did attacking the military work out for someone I am sure is a hero of yours, Sen. Joseph McCarthy?

The church fathers who assembled at Vatican II understood what Biden was talking about. In Gaudium et Spes, we read:

There is no better way to establish political life on a truly human basis than by fostering an inward sense of justice and kindliness, and of service to the common good, and by strengthening basic convictions as to the true nature of the political community and the aim, right exercise, and sphere of action of public authority (Paragraph 73).

They understood the importance of political participation:

It is in full conformity with human nature that there should be juridico-political structures providing all citizens in an ever better fashion and without any discrimination the practical possibility of freely and actively taking part in the establishment of the juridical foundations of the political community and in the direction of public affairs, in fixing the terms of reference of the various public bodies and in the election of political leaders (Paragraph 75).

The governor of Texas, Greg Abbott, is a Roman Catholic. How does his support for these restrictive voting measures comport with this clear ecclesial teaching? Will the zealots among the U.S. bishops insist he be denied Communion?

The base of today's Trumpite Party is beyond the reach of rational discourse, but I hope moderate Republicans and Independents were listening to Biden and will listen to Milley. We grow up with hyperbole hurled at us but Biden's and Milley's words were not hyperbolic. We really have not seen an assault on democracy like this since the Civil War.

Trump may reshape the electorate in ways he did not intend. We Americans like our democracy. We know that the freedoms we enjoy are what enticed many of our ancestors to come to this country in the first place and for which hundreds of thousands of soldiers and sailors and airmen fought and died. The stakes are high and Biden's speech set them out for all to see.

Column | Memo to Republicans on vote suppression: We Americans like our democracy